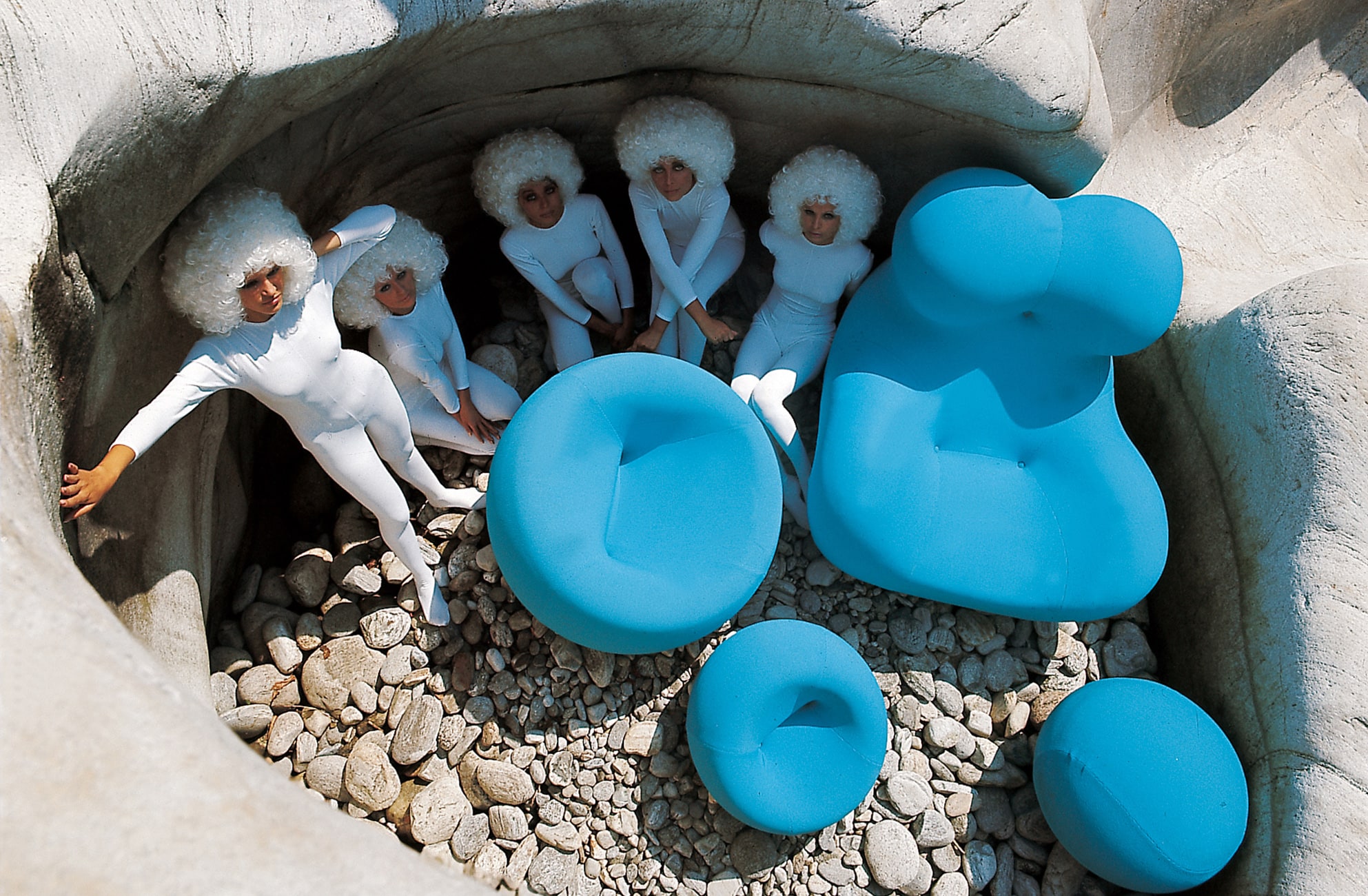 Gaetano Pesce, architect, designer, artist, is a ‘difficult’ protagonist of contemporary creativity, known for his visionary approach and moral passion. His imperfect silhouettes, intentionally irregular, are messages addressed to man and his passions, disruptive warnings that encourage us to approach life in its entirety, its flesh and blood.

In every circumstance, Gaetano raises his voice to defend the values of genuine creativity, to promote sensuality, to bring out the true nature of materials he shapes, without forcing them into a mold, bringing out their original plastic nature.

In his works that challenge the boundaries of geometry, we can see the impulse of instinct left to roam free and expand beyond the rules of form, in things designed to embrace the imperfection of magma, over and above the hand of man. Interviewing Gaetano, even by correspondence, is a life lesson that transcends the discipline itself, suggesting models of behavior.

The first question is borrowed from the title of the 21st Triennale, since the relationship between Gaetano Pesce and this Milanese institution is a long one, including the solo show in 2005 “Il rumore del tempo,” the Pink Pavilion at Triennale Bovisa in 2007, “Italy on the Cross” in 2010 and, finally, in 2015 for the exhibition “Arts&Food” curated by Germano Celant, the installation “La cucina come luogo di Passione.”

THE TITLE OF THE UPCOMING TRIENNALE, “DESIGN AFTER DESIGN,” URGES REFLECTION ON THE MODIFICATION OF THE PROFESSION OF THE DESIGNER. HOW IS IT CHANGING?

I hope that in the future the profession of the designer will be that of a person with more ethical sense. An individual who does not just work for money, as happens in most cases, but sets out with his research and innovative spirit to give Italian design the energy to continue to be the best in the world.

DOES AN INDUSTRIAL DESIGN DERIVED FROM THE BAUHAUS STILL EXIST, THAT OF FORM FOLLOWS FUNCTION, FOR THE GENERAL PUBLIC, READY FOR MASS PRODUCTION? OR IS IT BECOMING EXTINCT, REPLACED BY HYBRIDS OF ART, DESIGN AND CRAFTS?

The two aspects always exist: function and practical design is something we need, that we use, without claims on the intellect. The hybrid positions between art and crafts are also possible, but they do not come to grips with reality. In the past art was practical, useful, and in many cases also a political, philosophical, religious tool, etc. Design already has these virtues today.

There are not many examples, but an expression that speaks of materials, technological processes and high communication is already in the reality of everyday life. Just consider what Apple has done to allow people to communicate, to get back to writing, to express concepts.

Likewise, Facebook will very soon become the way to make democracy evolve. In other words, it will permit verification that elected politicians keep their promises, otherwise they will lose their jobs. These are examples of art that we are not yet accustomed to seeing as art, because we continue to think art is only what you see in museums.

THE GAP BETWEEN ELITE PRODUCTS AND PRODUCTS FOR EVERYONE KEEPS GROWING, CAUSING AESTHETIC AND CONCEPTUAL DETERIORATION OF MASS-PRODUCED PRODUCTS AND A SHIFT TOWARDS ART IN THE ELITE RANGE. IS THIS A TREND OR AN IRREVERSIBLE PROCESS?

It is a phenomenon that has always existed: there will be people who use their energies to improve themselves, and therefore belong to an elite, and those who waste their energies, uselessly. The latter will surround themselves with ordinary things.

IS THE CHANGE OF INDUSTRIAL GEOGRAPHY WITH THE GROUPING OF BRANDS AROUND INVESTMENT FUNDS CAUSING A MUTATION ON THE PANORAMA OF ITALIAN DESIGN?

The quality of design as an expression that looks to the future is changing. These corporate groupings are only interested in profits. They don’t have the brains to understand that the industry has a fundamental duty, which is to devote 30% of its activity to research on new expressions, new languages, new production processes, new materials.

I’m talking about Italian industrial companies that produce objects for the home and the office. I say ‘Italian’ because I do not believe that the companies outside our country undertake any cultural function. I find it worrying that our companies, which have given Italian design to Italy, are giving up – with the complicity of banal creators – on investment in the future, on the search for new ‘medicines’ as happens in the pharmaceutical industry. Furthermore, I think it is dishonest to exploit the term ‘Italian Design’ if one does almost nothing to make it evolve.

AN ASSESSMENT OF THE NEW GENERATIONS: MAKERS, YOUNG DESIGNERS WHO FOLLOW FASHION, OR ART, OR WORK WITH THEIR HANDS?

What other people are doing doesn’t concern me much, but I believe that the idea tested with the hands is enriched. Usually manual work is scorned by ignorant people (i.e. intellectuals), but from my perspective it has enormous importance. It doesn’t only mean shaping clay, but also putting electronic circuits together, the ones that will soon permit people to communicate with thoughts, without dialing a telephone number.

DOES IT MAKE SENSE TO TALK ABOUT A STYLE LINKED TO TODAY’S DESIGN, OR ARE WE IN AN ECLECTIC PERIOD OF COEXISTENCE BETWEEN VARIOUS AESTHETIC EXPRESSIONS CONNECTED WITH THE PERSONALITY OF CREATIVE PEOPLE?

I believe we are living in an era of ‘solitary birds.’ I wrote this to Mitterrand, for other reasons, on the day of his election in 1981 (asserting that the idea of the mass had become obsolete, that political movements that pursued ‘equality’ smelled old, that diversity was the means with which to combat alienation, etc.). In other words, the sound of the forest is no longer a symphony where individuals vanish and a choral effect emerges, but a song of solitary birds.

Artistic movements and ‘isms’ are no longer possible, in my view, so I would say that those who haven’t much to do follow fashion. On this subject, I like to recall what my friend Giampiero Mughini pointed out to me about the existence of young creative talents, like Andrea Salvetti, Alessandro Ciffo, Roberto Mora, who have abandoned abstract expression and use figuration to give form to their work. Today the computer speaks universally through figures; to communicate means therefore to abandon abstract languages, which very often are authoritarian (see the products of construction).

WHAT ARE YOU DOING RIGHT NOW?

I continue to think that when you say architecture you mean building. In the world of construction, as in that of objects, most of the things that are built are useful for living, working, etc., without claiming to do much else. Then there is another category of constructions that follow fashions and are configured through formal innovations.

In the first case most of the people involved have an architecture degree, while in the second there are many starchitects who produce decorative buildings (except for Frank Gehry and perhaps Herzog & de Meuron). Architecture has to do with a rare episode and happens just a few times each century, and its apparition can be counted on the fingers of one hand. It has to do with deep spatial innovations, new techniques, the use of materials as a result, without forgetting that architecture today is configured in ‘diversity,’ as opposed to the International Style, and tries to interpret the places, identities and cultures in which it is made.

Another thing I am working on, strangely enough, is a project for the municipal administration of Padua, to which I suggested taking advantage, in an architectural project, of the discoveries Galileo made in that place. To remind the world that his extraordinary revelations happened in that city: he lived there for 18 years with a companion who gave him three children, while he was teaching at the local university. The Venetian city commemorates all this with a marble plaque. Instead, I would like it to be aware of its good fortune, of the fact that it possesses two great episodes of human history: the start of Italian art on the part of Giotto, with the Cappella degli Scrovegni, and the discoveries of Galileo. Finally, I am trying to rouse several Italian companies out of their slumber, through some new projects.

WHAT FUTURE DO YOU SEE FOR DESIGN?

Design will always be useful and necessary, because in English it means innovation, and if we believe – as I believe – in progress, this will always happen through projects.

A PIECE OF ADVICE FOR THOSE WHO ARE APPROACHING THE PROFESSION…

Be curious. Finally, a reflection from a few years ago: will technology and its derivatives be so perfect some day that we will miss human defects?