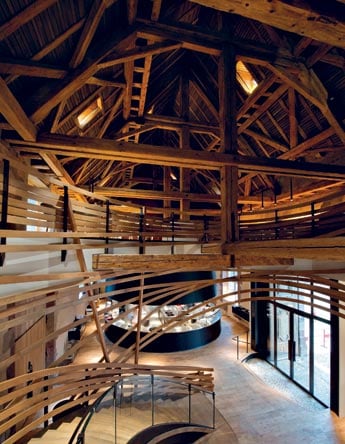 To restore and revitalize an abandoned monumental complex.

The client is a charitable association, an institute for cancer research (IRCAD), planning a project of architectural renewal inside a philanthropic strategy. The project approaches the transformation of the 18th-century complex that contained the stables of Strasbourg, a space large enough to house and care for 32 horses. In a neoclassical style, the building hosted the municipal riding academy starting in 1752, and then, from 1756, the royal stables. Closed down by the French Revolution, the royal stables were later reorganized and horses continued to be kept in the facility until 2005. A few years, then, to come up with a project that would lead to the rebirth of the place, maintaining its original architectural characteristics, but assigning it a completely different function. In 2010 IRCAD launched the restoration. The facility is next to the university hospital where IRCAD, a point of excellence for French scientific research, welcomes over 4000 surgeons each year to learn about technologies for non-invasive operations, based on the most advanced 3D image reproduction systems. Due to the position and the architectural quality, the stables seemed like the perfect space to welcome tourists and the surgeons arriving for professional training. The program outlined by IRCAD called for a hotel, a restaurant and a biocluster, an incubator for new companies focusing on biotechnologies, contributing to the self-financing of the institute. And the idea of excellence, which is so important in the scientific profile of IRCAD, has also been pursued in the restoration and plans for management of the facility. This focus extends to the summoning of Marc Haeberlin, a chef who has been awarded three Michelin stars, and the hotellier Jean-Pascal Scharf, one of the most outstanding professionals in this field in Strasbourg, appointed to manage the four-star facility. Maximum quality is also the criterion behind the choice of the designers. Denu and Paradon, a solid local studio outfitted for all types of design, and the Parisian agency Jouin Manku, were called in to transform the stables into a modern facility, developing the right relationships with the walls of the historic stables, without imitation but also without clashes. The theme, then, is the respectful transformation of an architectural structure of great historical value, but also the recovery, or reinvention, of a place that existed for over two and a half centuries with the colors and materials of horseback riding at its core: saddles, trappings, the simple, sturdy articles of stables. The team formed by Patrick Jouin, the French designer, with the architect Sanjit Manku, born in Kenya and trained in America, approached the challenge with the traits that are characteristic of their way of operating: great attention to materials and details, drawn from design culture, and a light, pragmatic architectural approach that nimbly focuses on achieving some striking images, though always expressing great sensitivity to the purpose and spirit of the place. In this case the task was to connect the rugged simplicity of the noble architecture of the stables with the refinement of haute cuisine and the comfort of a four-star hotel. The symbol of this union might just be the yurt, the tent of skins used by the nomadic horsemen of Mongolia, an inspiration to create, in the restaurant on the upper level, a more private space, a sort of table of honor that is recognizable, but also open to the large linear dining room. The other theme is clearly the rustic but also robust and monumental image of a building constructed halfway through the 1700s, with powerful wooden members and large spaces, gauged more for the size of horses than for that of human beings. Here again, Jouin and Manku have decided to work on continuity, trying to beam the 18th-century spaces into 2014 without too many hang-ups. In the restaurant, the imposing wooden roof structures are joined by what is probably the strongest and most emblematic image of the whole project, a grand monumental staircase that connects the two levels of the restaurant, conceived as a natural sculptural installation that mixes the ruggedness of materials like the oak of the steps with the dynamic, modern movement of the enveloping sides in beech, which seem to almost urge customers to climb the 32 steps leading to the dining room, almost seven meters above the brasserie level. The other elements seek a certain sobriety, allowing the staircase to keep the role of the primadonna. A quiet, welcoming tone prevails, with warm colors and materials, in which the old structures and the furnishings designed by Jouin, in the restaurant and in the hotel rooms, create a sense of true harmony.