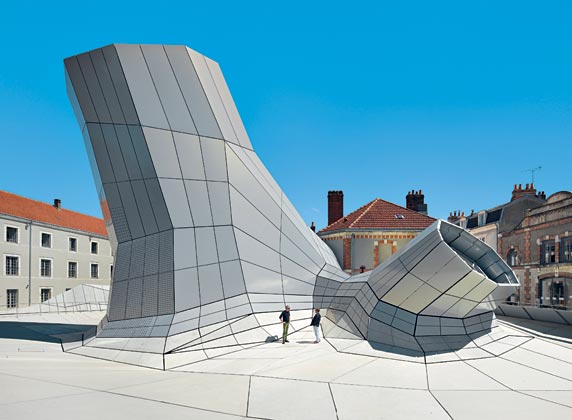 Dominque Jakob and Brendan MacFarlane are a duo of architects who experiment with digital technologies and new materials, in a methodological approach that is not above disciplinary hybrids and ‘special effects’ in architecture, expressed through an eloquence of sign that always adds the thrust of modernization to the contexts in which they operate.

That is what has happened in the project for the Docks of Paris, the City of Fashion and Design, in 2008, and before that for the Georges Restaurant at Centre Pompidou (Paris, 2000), just to name a couple of their more famous projects. The same can be said of the new FRAC in Orléans, a contemporary art center, the 12th of its kind open in France, shortly after the one in Marseille designed by Kengo Kuma, of the 23 Fonds regionaux d’art contemporain (30th anniversary this year, to celebrate this interesting policy of circulation of works and culture). In this case the signature of their project is a roof that reflects the value of structural texture inside a place, coping with the issues of historic environmental presences. The skin is made of a prefabricated tubular structure covered with anodized aluminium, fitting into a complex featuring 19th-century buildings. The addition, in metaphorical terms, is known as The Turbulences, precisely due to its volumes in motion that make it a new urban landmark, emphasized by the artists of Electronic Shadow (Niziha Mestaoui and Yacine Ait Kaci) who have partially covered the structure with an interactive veil of light, programmed in real time. The material reflects the fusion of architecture and art, the mission of the museum, which contains a collection of 15,000 drawings of experimental architecture, 800 models and 600 works by artists, in a composition that calls for about 370 m2 for the permanent exhibitions, 1000 m2 for temporary exhibitions, 180 m2 for educational facilities, and then a cafe, a bookshop, an auditorium and a documentation center. The entire interior of the building, on two levels, contains white, immaculate spaces, rows of arched windows, exposed physical plant conduits, inclined pillars that cross the spaces, white display fixtures like monolithic islands of different geometric forms, suspended with steel cables. The opening of the new FRAC in September coincided with that of the ninth edition of Archilab, the international laboratory on the most advanced architectural research. This year’s theme was Naturalizing Architecture, a way of exploring projects through digital tools, in keeping with the principles of nature: “Because architecture can be compared to an organism capable of evolving and adapting to the environment.” A start that fits right in which the project approach of Jakob + MacFarlane. “We have shifted the center of gravity towards the heart of the site, the internal courtyard,” they explain, that of the old 19th-century military warehouse that contains the FRAC and from which the renewal of the facility has been distilled from the interpretation of the roof. “The new urban signal – the turbulence – emerges as a dynamic module on the basis of parametric deformation and extrusion of geometric matrices of the existing buildings. It involves the entire U-shaped site and self-generates precisely starting with the encounter-convergence and interpretation of the forces at work there. Inside the square courtyard, conceived as a public plaza, a place of material and immaterial interchange, a topographical surface follows the level differences towards the museum entrance to configure the connection of the volumes and the program of the center, drawing the flow of visitors towards the exhibition spaces.” The higher turbulence frames the temporary exhibition space, while the lower one is for an audiovisual gallery, and the third for a lobby area, with retail and lounge annexes, the latter extending outward into the garden designed by the studio ruedurepos (Christophe Ponceau and Mélanie Drevet). The demolition of an existing building and of the wall along Boulevard Rocheplatte have made it possible to open the new complex towards the city, with a game of contrasts between lightness and bulk, light and shadow: the faceted portions of glass and metal reinforce the visual dynamics of the turbulences, which in the lower part are in concrete panels, underlining the continuity of the buildings with the courtyard, while in the terminal part they become two eyes pointed skyward, seemingly generated by thrusts from the earth. The essence of the genius loci, finally, is revealed in the encounter with the interactive skin of light developed by the artists of Electronic Shadow: a place devoted to experimentation of all kinds. Because the hundreds of diodes, which use the construction lines of the turbulences to pass from point to line, surface to volume, image to media-facade conforming to a reticular grid, define a breathing skin for the audience and passers-by. A dynamic form of architecture of information.