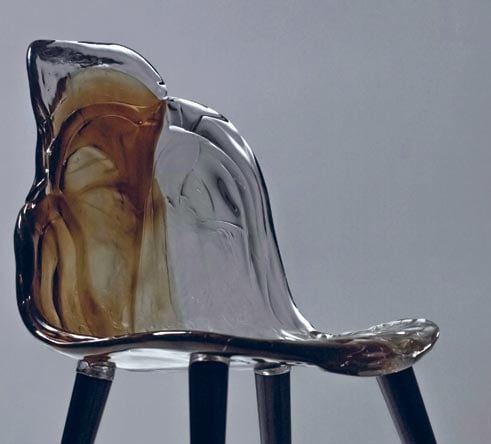 In the beginning there was methacrylate: extruded in long filaments, transparent, colored and shiny, with which Jacopo Foggini creates, starting in the 1990s, works and installations with surprising, glowing forms.

Today the magic of plastic that becomes material for artistic expression has been updated thanks to the painstaking experimentation conducted by the artist from Turin, and through polycarbonate it finds its own specific application in the field of furnishings. The result is a series of chairs that began in 2014 with Gina, and has grown this year with the addition of Gilda B., named for the editor of Interni with whom Jacopo has shared in many projects and adventures. The idea is to create more models in the near future. Of course these are not normal industrial products, but pieces made one by one, using a process of manual craftsmanship. But when Foggini states that “this is the first time I have created something with a concrete use,” one perceives all his satisfaction at having achieved a long-cultivated dream. The dream is called Edra, and in the artist’s view it is the Italian design brand that better than all others has made art and ‘other’ visions of living into the inspiration for production loved by all those who want to surround themselves with special objects. “I have always thought,” he says, “that Edra was the only design brand with which I wanted to work.” The collaboration between Jacopo Foggini and the Tuscan company began in 2009 with the Capriccio table in glass and metal tubing, whose irregular form was based on the dynamism of a musical instrument. It continued in 2011 with the Alice project, which introduced polycarbonate, extruded in threads to be shaped around a sculptural form, to make a monomateric seat with a tremulous, temporary look, though it is actually very solid. In 2014 Gina became the first real chair created by Foggini: a chassis formed by a single precious embroidery of extruded polycarbonate, in shaded, semi-transparent colors, resting on four tapered legs in painted wood. “A gesture projected into the future, which I wanted to contaminate with a reminder of the past,” Foggini explains. “With such an important chassis, I wondered about how to design the legs. As a point of reference, I looked at the ones Fornasetti usually used for his chairs. I studied them, and redesigned them; the juxtaposition with these Fifties parts seemed to work nicely.” The same wooden structure can be seen in the new Gilda B. chair, which unlike Gina has a chassis in compact material: still in polycarbonate, still transparent, but now enhanced by warm cognac tones that suggest a new expressive maturity for Jacopo Foggini, less ‘pop’ and closer to certain aesthetic contaminations with the world of interiors (design from the 1930s to the 1950s, the organicism of Carlo Mollino, first of all). The result is a seat that seems to be made of glass, but takes on a vibrant materic character in its imperfect, unfinished look. “With respect to methacrylate,” Foggini comments, “polycarbonate is harder to work; it has to be extruded at much higher temperatures, but it is stronger and lends itself to a wider range of applications.” Every Gilda B. chair is made by hand, one by one, when the material is still hot and can be shaped around a form. The process is done with machines and techniques Foggini has personally developed for the project. Every piece is different from the others; each chair expresses the ingenuity of a modern homo faber, a bit artist, a bit designer, who from Mollino to Piedmont Baroque, between industry, the art of glass and that of the pastry chef, gives plastic always new, surprising overtones of expressive impact.