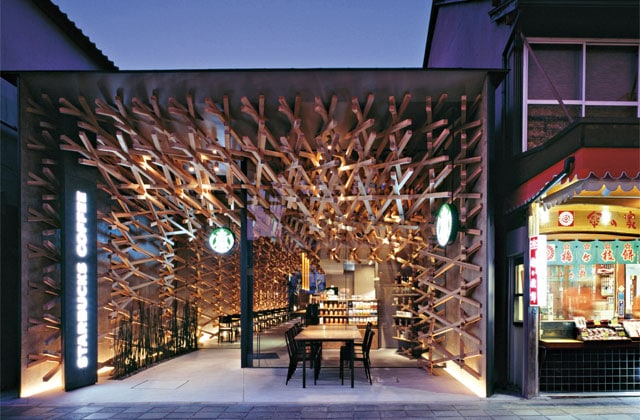 In 2007 Kengo Kuma was invited to take part in the event DECODE ELEMENTS organized by INTERNI at Castello Sforzesco in Milan.

He created a wooden installation that reinterpreted, as a possible work of architecture, the ancient Japanese game of Chidori. A game for kids and adults that might be compared to the occidental “Meccano”, using interlocking pieces of wood for the making of potentially infinite structures on a regular modular grid that can expand in all directions. Fascinated by this ancient ‘mathematical mechanism’ created for fun, Kuma reworked Chidori to create a complex micro-architecture that indicated the intention for possible development on a larger scale. A few years later, that initial experiment that happened far from Japan, in Milan, became a large-scale building at Hida Takayama, in the Gufu Prefecture (the GC Prostho Museum Research Center, see INTERNI, November 2010). So the Chidori, after a trip to Italy, which enabled Kuma to conduct this experiment in a temporary structure, went back to its native land in a more permanent constructed form. Today Chidori is still a reference point for the rich architectural vocabulary of Kengo Kuma, shifted in this case into the solution of a public interior that also becomes the image of a small building that contains one of the thousands of Starbucks Coffee outlets scattered around the world. But in this case, beyond the vertical sign at the entrance and the famous logo hung on the wall nearby, nothing seems to take the image and idea of space of this Japanese cafe anywhere near the many identical points of sale of the brand in the globalized world. Kuma, in a long narrow building that matches the scale of the neighboring edification, uses the memory and reinvention of the Chidori as a structural ‘architectural skin’ that covers the interior of the space, climbing the walls and the ceiling and emerging in the entrance. It becomes the ‘attraction front’ and part of a long wooden tunnel that leads to the cafe, accompanying the visitor along the route with a dense pattern composed of over 2000 slats of criss-crossed wood. Apparently balanced and assembled in a random way, the wooden parts obey a logic, as in the original game, of repeated interlocks, capable of forming a layered structure of great appeal, countering the simplicity of the individual pieces with the complexity of the whole.