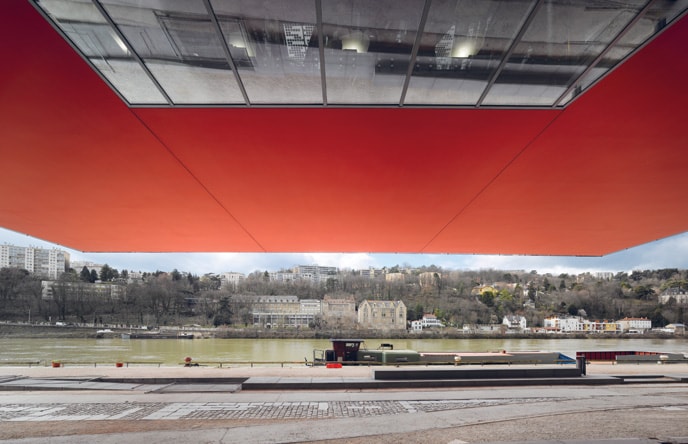 Winner of the Leone d’Oro at the Venice Architecture Biennale in 1992 and the Médaille de Vermeil et d’Honneur de l’Académie d’Architecture in June, honoring a creative career ranging from architecture to interior design to contemporary art, Odile Decq, the ‘punk chic’ exponent of French design, never ceases to amaze.

This time the setting is Lyon, “a true European city with a strong international character,” she says, with the new headquarters of LG Events. And very soon there will be another project in which she firmly believes: her school (she is one of the founders) Confluence, the dream that architecture can be increasingly transdisciplinary, based on interaction, to produce a new generation of Renaissance, humanist architects. But that’s another story The dream of expressing the aerodynamic potentialities of works of architecture in steel (on a concrete base), on the other hand, has already become a reality in the 8300 square meters of the pavilion number 8, set aside for the offices and spaces for the organization of events of the group LG. Built between two rivers, the Rhône and the Saône, in the strategic, revitalized context of the Docks of Quai Rambaud, previously occupied by industrial plants and since 2003 involved in a major project of urban renewal, next to cultural facilities and structures for research and higher education, the building is a compendium of lightness, figurative poetry and technical engineering precision. In other words, a highly specialized project in terms of its constructive process, but one that has been conceived inside the framework of great cultural openness of its deux ex machina. “I have always felt a great sense of responsibility in the act of designing,” Decq explains, “which with respect to contexts and social needs means transforming, creating grafts, coming to terms with inevitable losses.” In this case, the loss would be that of the natural and artificial environment that had grown up over the course of time along the river, and of the genius loci, the memory of the industrial past of a city and a community, erased by the physical impact of the new architectural volume. The building, thanks to the almost muscular sturdiness of its rugged metal structure, presents itself in an enclosure defined by a double dynamic ventilated facade, completely glazed and of a rarified consistency, extending like a belvedere balcony over the nearby waterway: a landmark, an architecture-landscape that marks the new geography of the urban fabric, maintaining a close relationship with the history of the site: a manifesto that combines the intentions of the clients with those of the designer. Placed on an enormous three-dimensional structure of crossed double beams, supported by three large steel columns, the new pavilion is composed of two overlaid parallelepipeds that are not completely perpendicular, for a total of six levels. The rhythmical accent with respect to the transparent and compact front is provided by an overhang with a length of 28 meters of the four upper levels, resolving the node of its longitudinal extension, asserting its image with an escamotage: a roof in transparent glass topped by the sign of a red-orange frame that makes it possible to gradually discover the volume and its contents, even when seen from below, strolling along the river. All four facades continue the game of the permeable interface between architecture and environment, nurturing a singular texture, in tension between opacity and transparency, thanks to the artistic contribution of Felice Varini. A particular technique has been used to insert four views of the city seen from above into the glass, like a black and white film that replaces the directions of the landscape blocked by the presence of the building. The flat roof terraced with photovoltaic cells becomes the stage for the excellence of the urban setting, opening to free gazes and multiple vantage points, set aside for the workers of GL Events and their guests. The mood does not change in the interiors: “The basic principle that guided the design, by precise request of the client, was total transparency,” Odile Decq explains. “In essence, these are primary elements to imagine the dimension of a dynamic, fluid network, a sort of hub for the circulation and sharing of communications.” With extreme consistency on the visual plane, the matericchromatic range is oriented towards a uniformity that evokes the identity and suggestions of the context, deploying solid quartz, resin and carpeting for the interior finishes, durable Corian for the fixed furnishings, and a range of tones of dark gray. The sole dynamic counterpoint is the red-orange favored by the Breton architect, already applied outside for the frame of the overhanging volume (and, luckily, coinciding with the color of the logo of GL Events), which returns on the few opaque walls treated as backdrops, and in the carefully selected furnishings of the cafes on the first and third levels, the gourmet kitchen on the fourth, and the bar on the roof – all the spaces for socializing and informal encounters of working life. Which in this place will be anything but gray.