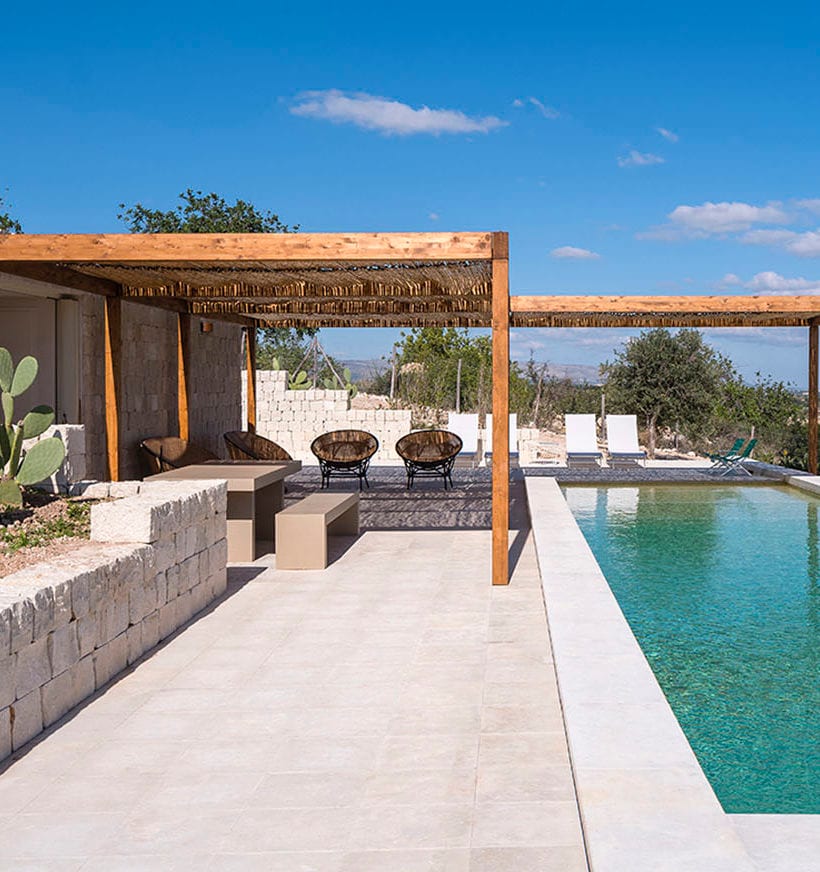 Under the skies of Sicily

Under the skies of Sicily

Near the Vendicari nature reserve, in the province of Siracusa. On a hill overlooking the sea, a villa embodies the theme of the classical patio house. To meet the challenge of an architecture that is totally in tune with the landscape

The house is a discreet presence on the hill studded with almond trees, under a deep blue sky. “It is not at the top, but just below it, resting on the slope, just as the masters of modernism, from Wright to Mies van der Rohe, have taught us, because this choice represents a refined, indispensable compositional tool.”

This is the start of our conversation with the architect Martina Meluzzi, who has designed this project in sicily. From rome, 44 years old, residing in london, Martina worked for 5 years in the prestigious firm of Norman Foster (“…it was my dream, as soon as I graduated i went to london with that in mind”), and today she runs Mai Studio, founded in that city ten years ago. “A courageous choice, almost reckless,” Martina recalls, “but an extraordinary client came along to whom I couldn’t say no: the famous hollywood actor Orlando Bloom asked me to work on his new house in london…”.

Let’s talk about Sicily: exactly where is this house located?

In front of the Vendicari nature reserve, between Noto and Pachino, in the province of Siracusa.

A proving ground of sorts, to work right next to a nature park… What was the objective?

To be in total harmony with the Sicilian landscape, without erasing the architecture, with its complete focus on perception of nature. The house is organized around a square patio, which becomes its heart: one side opens to the sea, while the others face inward, in an incessant indoor-outdoor osmosis that extends and expands the living spaces.

Vice versa, the outer ring of the building contains the bedrooms, guaranteeing the necessary privacy. The bond with the landscape is thus resolved with a pure, simple geometric form, springing from orderly clusters of basic solids. The house rests on the ground lightly, adhering to its shape thanks to the play of volumes, shifted with respect to one another in a gradual way, without ever seeming invasive.

What is the result?

An explicit invitation to movement, making the space permeable also in visual terms: the volumes shift in the plan, horizontally, and in the elevations, vertically. This dynamic character is accentuated by the use of color: the yellow volume of the kitchen, for example, stands out against the blue volume of the living area, which in turn extends in a different direction to create a sort of thrust; in short, a way of urging movement…

So color becomes the protagonist of the interiors?

I like to say that this is an ‘inside-out’ house because it forcefully brings inside the colors of Sicilian nature: the bright yellow of lemons, the intense blue of the sky… and in any case it is part of the local tradition to use strong tones, which I have then interpreted in a contemporary way, rigorously in solid color fields…

the chromatic palette changes completely. The house is faced with the same color as the calcareous earth of the hillside, as if it were a part of it. We should point out that the site was never leveled: simple ‘trenches’ set into the ground mark a sort of transition between the land and the building. The volumes, staggered by just 60 centimeters, are ‘embedded’ in the hill thanks to their neutral color (we did lots of color trials to get just the right tone) and even the two towers, the only vertical presences, fit perfectly into the landscape, replicating the same dark hues as the trunks of the almond trees on the hillside.

What are the two towers for?

They capture the wind. In fact they are called ‘wind towers’ and they have been borrowed from the Arabian tradition of construction. Through open grilles at the top of the vertical walls where the prevailing winds blow, the air is drawn downward to bring comfort and coolness to the interior of the house, but also into the patio during the hottest hours of the day.

The two towers also have a compositional function, connecting with the volumes of the house. To lighten everything, the two blocks are visually independent, like two isolated elements, but they connect to the rest of the house by means of glass blades (forming a sort of squared arch) that bring light inside.

The overall effect is spartan, also in the material choices, always with an eye on the local tradition. The furnishings are nearly all custom pieces, reduced to bare necessities. Because the Sicilian light and landscape are the unconditional protagonists of the house.

Many projects are being developed with my studio, and as a consultant for Foster+Partners I am working on the project of the high-speed train station in Florence. It would be impossible to separate from that ‘first love.’

An image of the house ‘embedded’ in the hillside covered with almond trees.
Detail of one of the two ‘wind towers,’ the only vertical parts of the building. They are based on a constructive device borrowed from the Arabian tradition that brings wind downward through open grilles in the vertical wall to offer fresh air to the interiors of the house.
The section of one of the two ‘wind towers’ showing the simple mechanism of air circulation from above (where the wind is ‘captured’) through the internal spaces of the house.
Monochrome volumes alternate in the interiors, lighting up like neon at dusk: “I took my inspiration from James Turrell – the American artist who is the ‘master’ of light – to create a sort of luminous performance that repeats every evening,” the designer says. The patio is at the center, with the house organized around it.
The custom furnishing solutions have a minimal character. Starting with the volume of the kitchen, where color plays a design role: the chromatic choice of yellow grabs attention, putting the accent on the colors of the Sicilian landscape. The choices of materials also reflect the Mediterranean tradition of the island. Like the floor in ‘pastine,’ the typical decorated cement tiles of Sicilian houses, utilized in a contemporary setting as a sober monochromatic solution.
The swimming pool forms an independent area with respect to the volume of the house arranged around the central patio.
This intimate, secret space is faced by all the living areas, while the bedrooms are along the outer perimeter (the master bedroom).
#Design #Projects