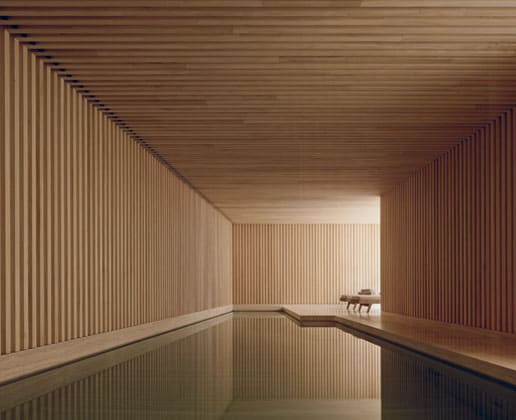 To build a new private work of architecture in the center of London is no everyday task, and this project by David Chipperfield Architects seems like one of the few cases of reference in which a work on a relatively small scale – an urban villa on a lot previously occupied by a traditional Victorian house – underlines, also in its ‘domestic dimension,’ the value of contemporary architecture and its ability to insert itself in open dialogue with the historic and monumental fabric of the host city.

The new construction is aligned with the frontage of the adjacent buildings, conforming to the historical grid to form a trapezoid layout with an angled side facing the street, creating a small recessed courtyard-garden to the rear, faced by the ground floor and the first basement level. The whole construction has five levels, three of which above ground. They form the main urban facade, marked by an access portico with an impressive central cylinder on which to position a sequence of two stacked loggias that alternate cylindrical columns of different diameters, tapering from the first to the second floor, maintaining the same vertical alignment but increasing in number, from four to six, thus widening the loggia across the total span of the facade. The columns, like the whole front, are clad in pale handmade brick that blends well with the Travertine stone floors, and the elegant bronze balustrades, a material also used for the casements and doors. The three bands that form the precise geometry of the facade thus widen from below to above, underlining the relationship between full and empty zones and the ground level treatment of the construction, intentionally in only one material to emphasize the clean overall form. The central portico, in shadow, sculpts about one third of the compact brick facade. The opening of the facade then widens at the first floor, with the loggia with four columns, and opens completely on the upper level, marked by the sequence of six brick columns. Symmetry and understated monumentality, an almost classical atmosphere, establishing an objective relationship with the surrounding urban context without avoiding the contemporary sign, stated with rigor and conviction in the overall figure of the building that takes us back to the memory of the civil and monumental architecture of the past, while avoiding the pitfalls of revival and caricature. The interiors match the rhythm of the facade, overlaying spaces and functions; from the second basement with its fitness zone, swimming pool and sauna, flanked by a dining area with kitchen and wine cellar, to the first basement containing the guest area, with four bedrooms facing the recessed outdoor space, each with its own bathroom and closet. The ground floor is a circulation area, offering the main route to the upper levels and the descent to the basements thanks to two staircases placed at the extremities; one end also has a lift for access to all five floors of the house. The larger, more luminous staircase connects the entrance to the first floor only, which contains a large living area and a second kitchen for family use. The upper level hosts the master bedroom, in the entire available space, featuring fixed furnishings to create a central alcove flanked by a small foyer and, on the opposite side, the ‘bathroom’ and adjoining services. An urban villa for exceptional spaces, open to the city framed by the regular pace of the columns and the greenery of the trees that contribute, with their alignment, to the design of the street.