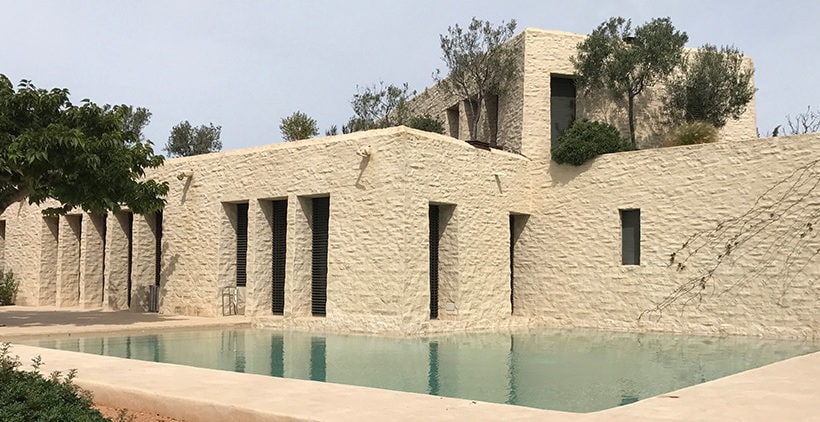 In Majorca, Balearic Islands, the buen retiro of the architect and designer Alberto Lievore and his partner, the illustrator Lis Beltrán, is like an island on an island, a timeless spacefor meditation

Alberto Lievore is an Argentine architect and designer based in Barcelona. A consultant and art director on an international level (for companies like Arper), he has always made the materic-sensory dimension of objects and spaces one of the foundations of his ongoing holistic research.

The residence he has designed for himself and his companion Lis Beltrán in Maiorca, Spain a few years ago is a case in point. A vacation home on the largest of the Balearic Islands, conceived as a private refuge, a container of emotions and personal histories (“a mirror of the soul” as di Mario Praz famously put it).

With a fresh image, always open to new possibilities of use of spaces and furnishings, the house adapts to changes in the weather and in life, making it always seem new. “Luxury in a vacation home means being able to make it exactly the way you want it, free of functional constraints,” the owner says.

“It is a dream, an amazing time machine, an isolated bubble, far from everyday life. Lis and I wanted the place to give us a chance to free the mind – as in a monastery – so we have made a very careful selection of just a few furnishings. Instead of objects, we like to fill the space with music, while we focus on what we like to do best: reading, cooking with aromatic herbs, taking long walks, recovering a sense of inner peace, on our own or together. In this ‘immensity’ we find room to think.”

The character of the architecture, which conveys a sense of inimitable tranquility, comes above all from the material with which it is made: the typical local limestone. “It is a tribute to the buildings we see on our long walks down the southeast coast of the island, which remind us of old Mediterranean constructions scattered throughout southern Spain,” Lievore explains.

The identity is also based on the form of the windows: deep and narrow, from a distance they look like loopholes carved into the thick stone walls. “From the outside these linear cuts, which keep the strong sunlight at bay and provide privacy, suggest the aura of a castle, strong but discreet, seamlessly inserted in an uncontaminated setting,” he continues.“Inside, the large white spaces trigger a feeling of meditative peace.”

The context has been an extraordinary influence. After searching for the right site for a long time, Lievore opted for an old rural house that has been incorporated in the new structure, in a dialectic relationship between old and modern, past and present, in full respect for nature and the landscape.

The building – 420 square meters on two levels – is organized in two parts: summer and winter, which from the height of the island face respectively towards the sea and a valley of pine trees. The upper volume, for the bedroom zone, fits diagonally into the lower one, set aside for the living areas organized around a hearth and communicating directly with the garden and the pool.

The two floors are connected by an internal white staircase with an essential linear form. The compositional and geometric clarity of the whole house is underlined by the neutral setting of total white, open, flexible spaces, which encourage circulation and fluid perception of the rooms, accompanied by the uniform flooring in pale local stone, and the play of light and shadows. The ideal backdrop to bring out the lightness and elegance of the furnishings, featuring very expressive textures.

Exterior view of the house of Alberto Lievore in Majorca, Spain, built with the typical Majorcan stone dry masonry, which determines the slope of the walls (photo Alberto Lievore). Facing south towards Cala S’Amonia, the building blends into a landscape of olive and almond trees and rocks, which has also generated the design of the roof-garden and the swimming pool. The upper volume looks towards the Es Rafal des Porcs nature reserve
Already in the entrance zone, one notes the contrast between the white, abstract spaces wrapped in diaphanous brightness, and the primitive art objects that form the mise en scène (photos Christian Schaulin, Kerstin Rose Medienservice).
Alberto Lievore.
The dining area opens in two directions towards the surrounding nature. Around the Tulip table by Knoll, Catifa chairs by Arper. The refined twist of the spatial enclosure and the fluid relations between the spaces are underlined by the uniform flooring in Bateig stone.
Plans of the two levels of the house.
Plans of the two levels of the house.
The large living area gravitates around the fireplace: there are six of them in the house (photos Christian Schaulin, Kerstin Rose Medienservice).
The studio corner with Lievore’s worktable and the chairs by Arper (photos Christian Schaulin, Kerstin Rose Medienservice).
The master bedroom on the first floor, with views of the roof-garden, the sea and the sky. The pursuit of a constant indoor-outdoor relationship is underscored by strategic vertical and horizontal openings that generate refined effects of transparency and luminosity in the rooms, bringing out the essential design of the carefully selected furnishings and primitive art objects (photos Christian
#Design #Projects