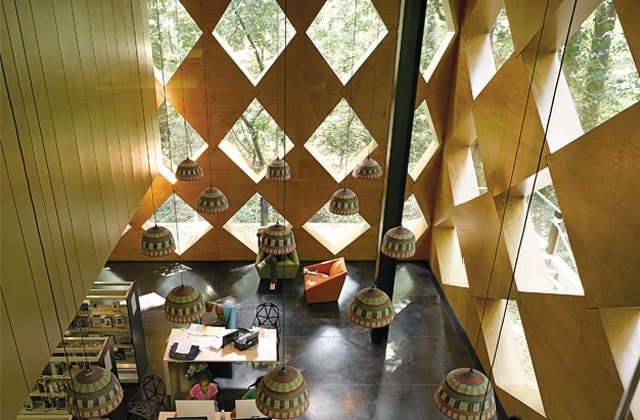 Part of the ambitious program promoted by the District of Columbia Public Libraries (DCPL), these neighborhood libraries created by David Adjaye and his team are like little community centers, informal, open to all.

Landmarks whose image as modern public ‘pavilions’ attempts to redeem the anonymous and repetitive surroundings of single-family homes with lawns, typical of the American suburbs. The Francis Gregory Library and the William O. Lockridge/Bellevue Library, in spite of their different layouts and compositional approaches, are part of a single path of design research to add strong character to the architectural value of the whole, creating ‘incubators of knowledge’ and encouraging socialization. Near Fort Davis Park, in the southern part of the city, the Francis Gregory Library is an efficient cultural structure, connected with the philosophy of American parks, and an element of connection between the perimeter of the green area and the nearby edification. The regular rectangular footprint is developed as a combination of complete units: the volume with two levels (connected by two-storey spaces) of the body of the library and the roof. This is a horizontal blade, suspended and figuratively detached from the space below, nestled under the blade of the roof that protrudes on all size, with a larger overhang at the entrance. The character of a pavilion in the park is underlined by the materic treatment of the facade, a sort of double skin with layers, from the external glazing to the interior with a thick wooden wall that alternates full and empty segments, following the geometric projection of the facade pattern. The play of the openings underlines the indoor-outdoor relationship, filtering the presence of the greenery and repeating the rhomboid pattern in the form of the pieces of the suspended ceiling. Along the whole entrance facade the internal space has a double height, with the staircase treated as a rectilinear feature, inclined with respect to the lines of the facade, adding dynamism and compositional variety to the image of the interior. A welcoming, luminous space, closer to a gathering place than to a functional, rigid place for studying. The same philosophy lies behind the William O. Lockridge/Bellevue Library in the District of Columbia, which has a more complex planimetric solution and a layout on three levels. Set down in a residential context, the library acts as an urban hinge, a meeting place emphasized by ‘crossings’ and the sum of its apparently independent parts, that are nevertheless connected in the overall structure. A sort of covered plaza created by the overhang of two distinct volumes on the second level, resting on partitions with variable geometry, leads to the ground floor entrance and to the first level of the reading rooms, thanks to staircases and ramps. The second level has a detailed plan, with the central room surrounded on two sides by three satellites grafted onto the main volume, for different functions. Here again we find striking episodes of two-storey spaces that capture zenithal light from the roof. Exposed concrete and large windows, a facade of vertical wooden segments alternating with strips of glass for the protruding volumes, form the essential ‘architectural skin’ deployed to clad the new ‘attraction’ of the neighborhood, part of a widespread policy of structures for culture and information conceived as social places that form a network distributed around the city.