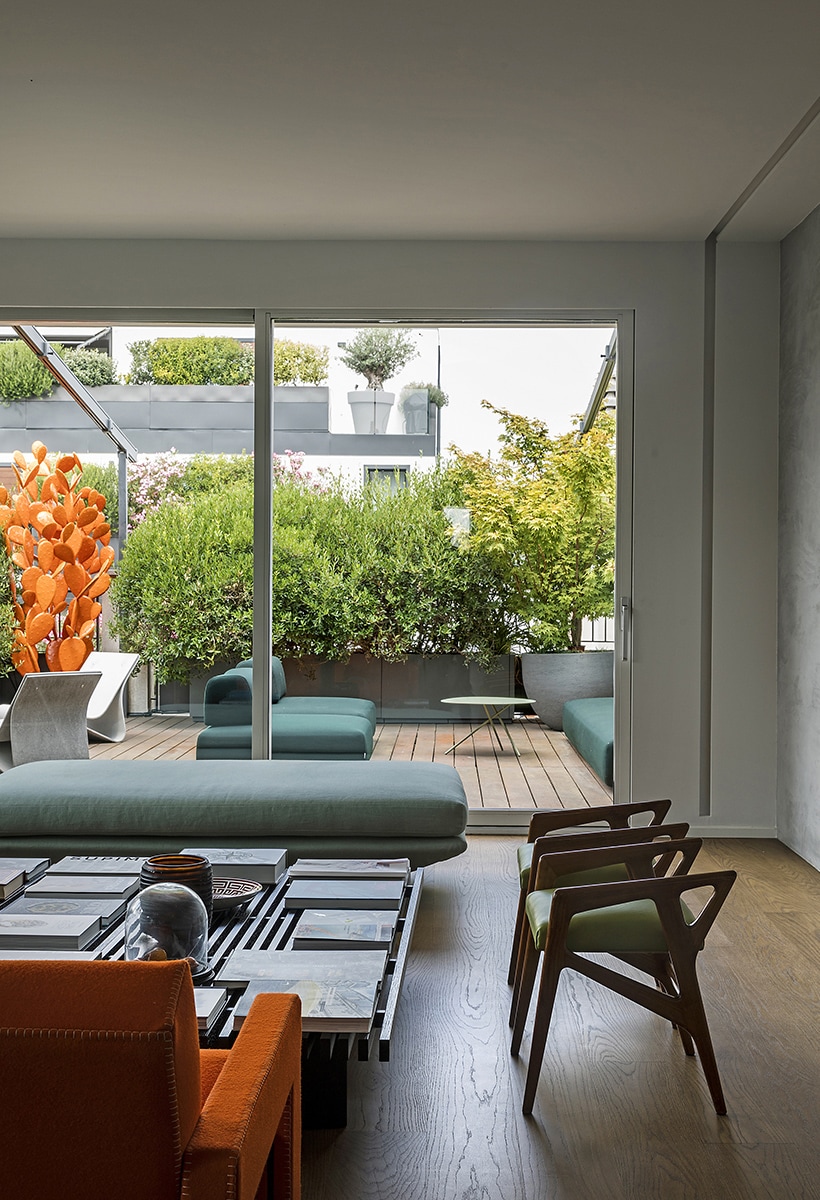 In Milan, a luminous duplex has been reinvented with compositional rigor and details of style, texture and colors, inspired by the surrounding natural setting, which becomes the protagonist of every choice

She is an interior designer, with a past in fashion, and she thinks in terms of centimeters, confident in her stylistic choices. He is an architect, who thinks in terms of meters, rapid in his compositional reasoning. They are Enrica Massei & Silvio Maglione, two different paths united by a complementary vision of design. In this recent project in Milan, they come to grips with the renovation of a large, complex apartment on multiple levels, a penthouse and attic created fifteen years ago following the reorganization of a building from the 1920s.


Silvio Maglione
°
The practice deals with renovations and architectural design, following the project with particular attention to the distribution aspects of the environments, the choice of materials and the attention to detail. A service is offered that goes from the design to the management of the works on site, from the consultancy for the purchase of the materials to the custom-made furnishing and to the choice of the luminaires, always guaranteeing a high quality level. The practice avails itself of the collaboration of companies, artisans and trusted suppliers thanks to which all the phases of the project are managed up to the turnkey delivery.

“When we saw it, we immediately said: wonderful light, beautiful spaces, but with dull, anonymous rooms,” they say. “The beautiful thing is that this duplex seems like a villa surrounded by a park. Its exceptional terraces, to the right and left, above and below, immediately told us we would be able to intervene in a significant way on the outdoor spaces as well, making the two dimensions work together,” they continue. “The layout was fine, but what was needed was a clear, linear concept covering functions and details, where the decorative aspect is never an end in itself, an afterthought, but instead the consequence of a series of choices.” 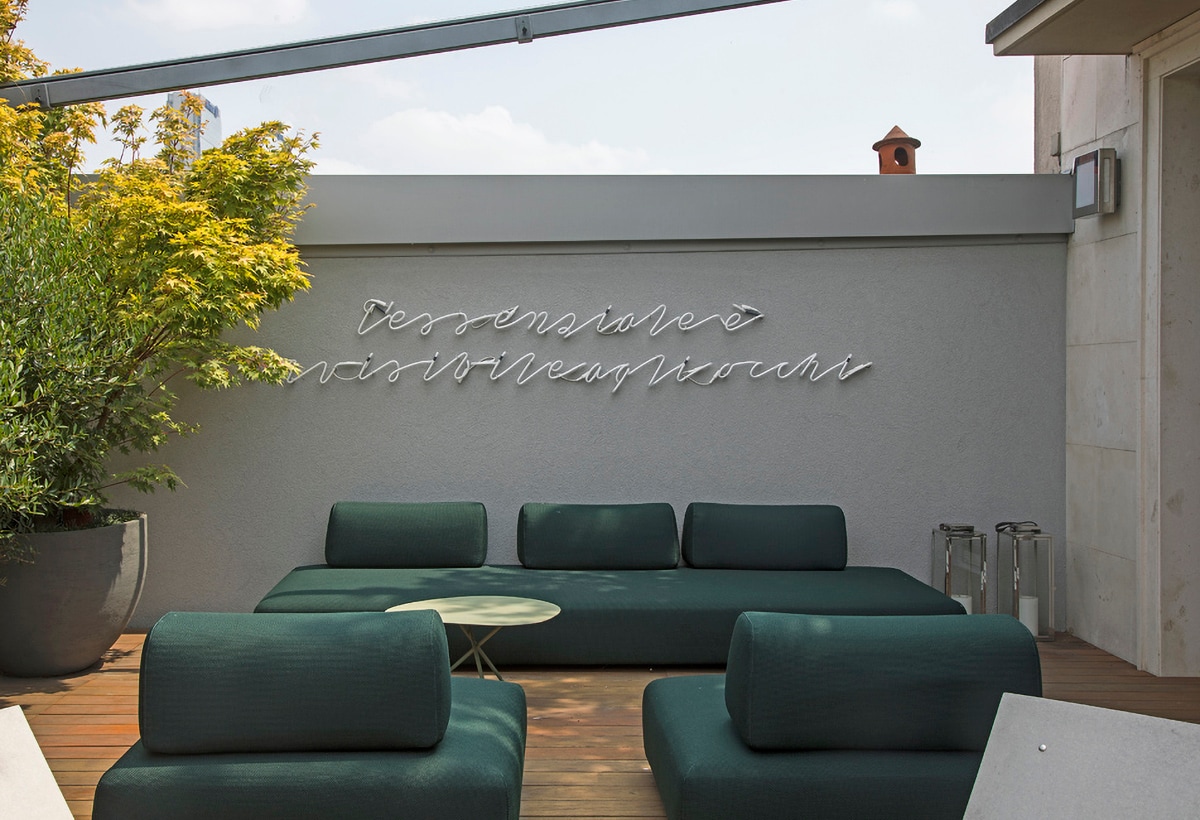 6
Detail of the wall on the outdoor terrace with a neon work and a quotation from The Little Prince, “what is essential is invisible to the eye.”

The first was to conserve the original layout and to take advantage of the clean forms of the plan, making openings through the rooms to generate new openness and perception of an overall synthesis. Then, inspired by the context, the designers identified a leitmotif – the theme of green, dreamy, off-scale foliage, as in an equatorial forest – pained on the walls of the double entrance volume, a space where by looking up you can see glazed portions of the veranda on the upper level. This is the calling card of a house in which light, materials and color enhance and interpret the rhythm of the rooms with evocative interactions.

The second choice was to replace an unattractive squared staircase in iron with a helical volume in walnut, similar to the tone of the floor in darkened oak. “The archetypal idea of the staircase, which was invented by observing trees, symbolically suggests the figure of a twisting trunk, leading up towards the light,” the designers say, “together with a cascade of droplets of glass at different heights that light up with the effect of a suspended magical setting, a custom solution requiring great expertise in the design, the craftsmanship and the technology.”

“
The spaces have been organized with custom furnishings and design pieces, applied as devices to establish fluid relations between perspectives and light, people and minimal-decorative objects."

The seamless indoor-outdoor dialogue is emphasized by large glass walls on both levels, and by uniform teak decking on the terraces, allowing the horizontal wooden surfaces to ideally extend without divisions. An opaque gray wall in fair-face concrete, with its material presence, becomes the factor that balances the lightness of the spatial construction, as a backdrop in the dining area, separated from the kitchen only by a sliding full-height glass partition.

The spaces have been organized with custom furnishings and design pieces, applied as devices to establish fluid relations between perspectives and light, people and minimal-decorative objects. A few pieces, all with specific tones of green in relation to the chromatic range of the surrounding trees, in different materials and glossy/matte finishes, underscore the tactile aspects. The domestic landscape also reflects the colors of nature in the bedroom zone, where openings predominate over full volumes. As in the master suite, provided with an ample closet and a large bathroom. 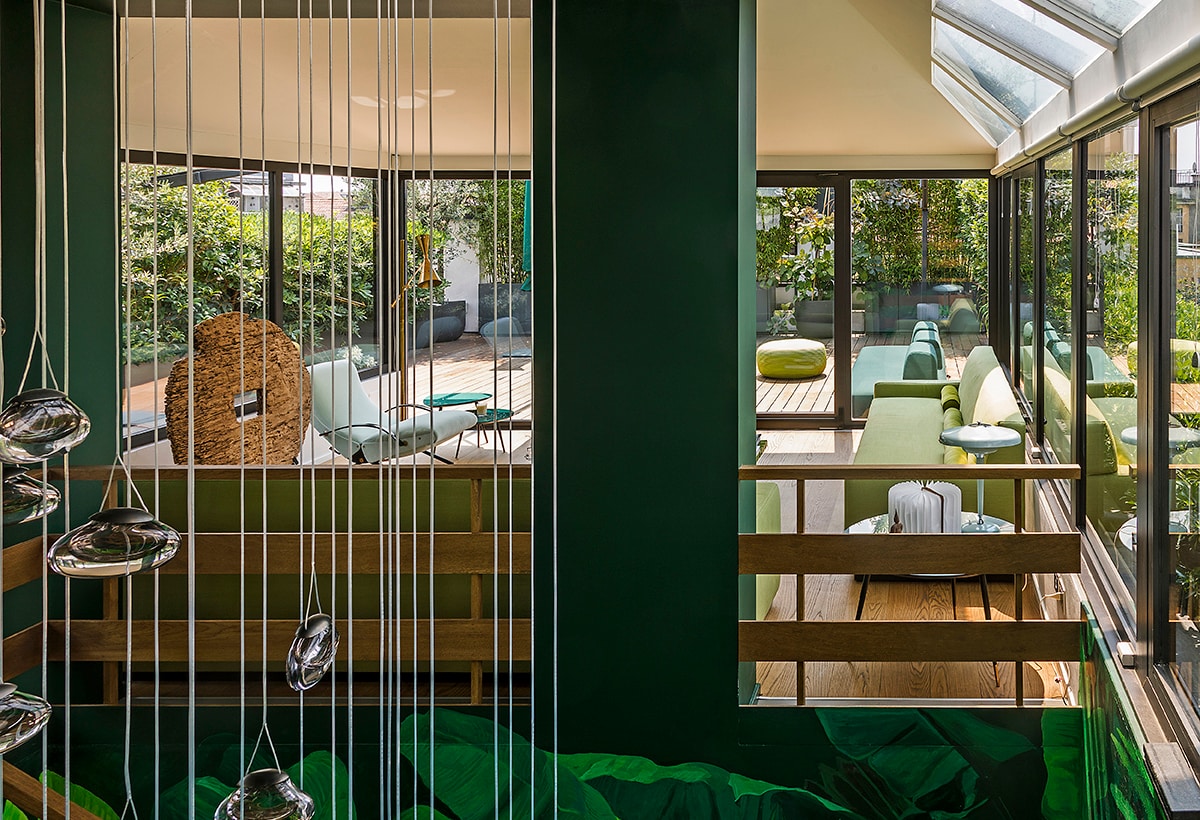 5
View of the living area on the upper level, a glass box that encounters the chromatic range of the outdoor landscape. Custom sofas, P40 chair by Osvaldo Borsani for Tecno, tables and lamps from the 1950s. on the terrace, ottoman by Paola Lenti.

The rooms now open with full-height doors along the long narrow corridor that departs from the ‘forest’ of the entrance, also optimized in terms of height (lowered, to conceal the climate control system), with a cut for artificial light running along the ceiling, amplified in the encounter with the zenithal light at the termination of the perspective. The same exercise, which produces the perception of an infinite line, is repeated in the living area, while the wall on the outdoor terrace enhances the narrative with a neon work and a quotation from The Little Prince, “what is essential is invisible to the eye.”

“
The first choice was to conserve the original layout and to take advantage of the clean forms of the plan, making openings through the rooms to generate new openness and perception of an overall synthesis."

The upper level is the unrivaled kingdom of relaxation, reformulated in the glass veranda and the surrounding terraces. Here a living room and a bar area with refined bottle green paneling introduce – through a game of steps that also have a storage function – the outdoor dimension of the islands for dining, conversation and sunbathing. The furnishings, with their great attention to detail, shift towards more acidic, sunny tones of green and yellow. A series of custom perimeter metal vats contain the vegetable garden and the plants selected by the garden designer Cristiana Ruspa.