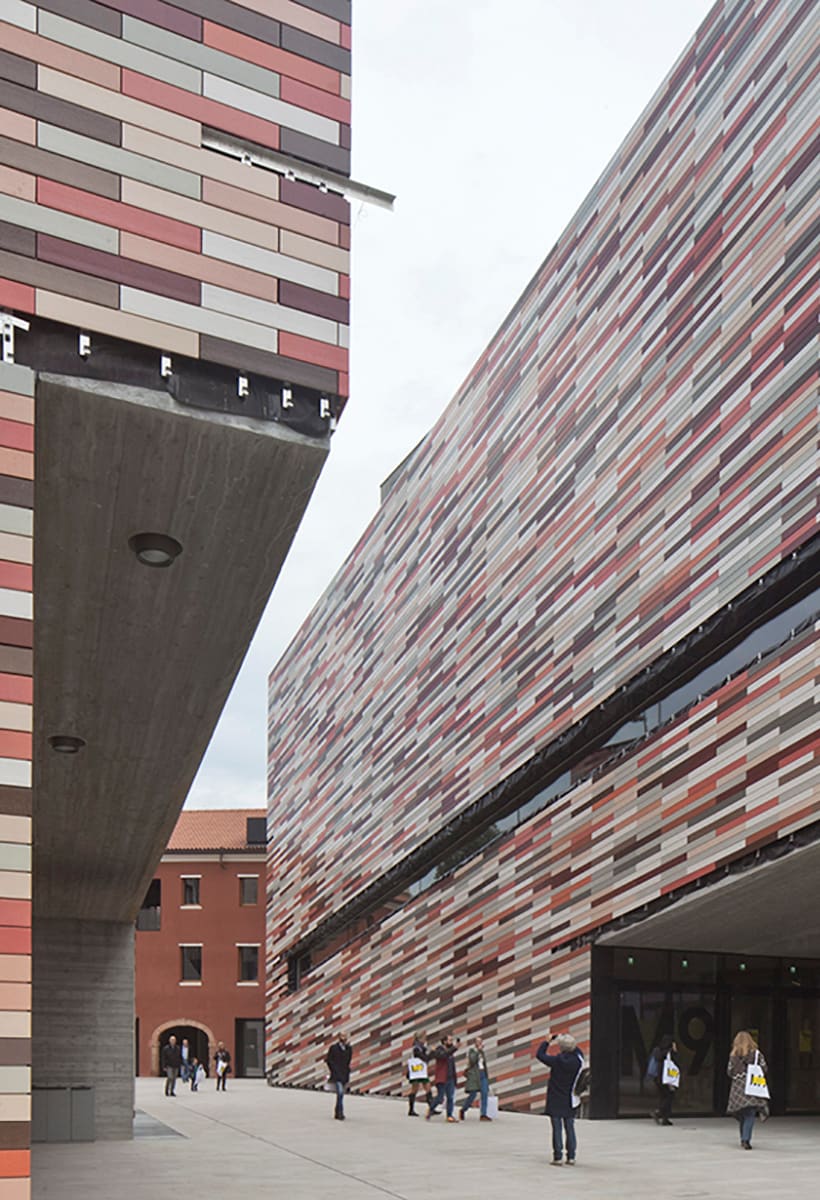 The multimedia museum by Sauerbruch Hutton

Venice Mestre opens M9, the first multimedia museum on the history of Italy in the 20th century, forming a bridge between history and contemporaneity, as part of a new multifunctional complex in a synergic program of urban regeneration created by the Berlin-based architecture firm Sauerbruch Hutton

In Mestre, the center of a dynamic metropolitan area near Venice, Treviso and Padua, the long-awaited M9 opened on 1 December 2018, as the first multimedia museum of Italian 20th-century history, which together with entertainment, service and retail facilities forms a new multifunctional complex, an advanced cultural and social initiative in the historical center of the city.

The architectural design is by Matthias Sauerbruch and Louisa Hutton, winners of an international competition held in 2010 by Fondazione di Venezia, which has invested 110 million euros to enhance the offerings of the territory, relying on the company Polymnia Venezia for the construction and development.

°
Matthias Sauerbruch studied at the Hochschule der Künste Berlin and the Architectural Association School of Architecture in London. He worked at the Office for Metropolitan Architecture in Londonw as project manager for six years and partner for four years. Louisa Hutton studied at the University of Bristol and the Architectural Association. She worked with Alison + Peter Smithson for four years. In 1989 they founded Sauerbruch Hutton and had been directing the office since then.

With tact and measure, operating through linguistic subtraction, formal and material reduction, the architects of the Berlin-based studio Sauerbruch Hutton have guided the complex process of urban regeneration in an area of 8775 square meters, which for over a century was off limits to the public, since it was a military barracks. The architects have worked on seven buildings, including three new constructions.

Their work has spanned different levels of reflection and intervention: the site itself and its layered memory over time, the old and new buildings with their contents and functions connected with the museum (cafes, restaurants, bookstores, kids, entertainment), and the spatial-visual organization of the overall insertion in the urban context.

“We sought dialogue, in a spirit of openness and inclusion, first of all with the community of reference, and then in territorial and architectural terms,” the designers explain, “linking back to existing forms and images, and the surrounding landscape. We now live in the post-Bilbao era: it is possible to be spectacular also by working on fragments.

With color, for example, that plays a key role in terms of perception, varying the spatial impact of a compositional puzzle, also through optical effects. The facades of the new museum building are clad in a multicolored texture of over 20,000 ceramic pieces in 13 tones, which vary their appearance with the changing light, connecting with the chromatic variety of their surroundings.” 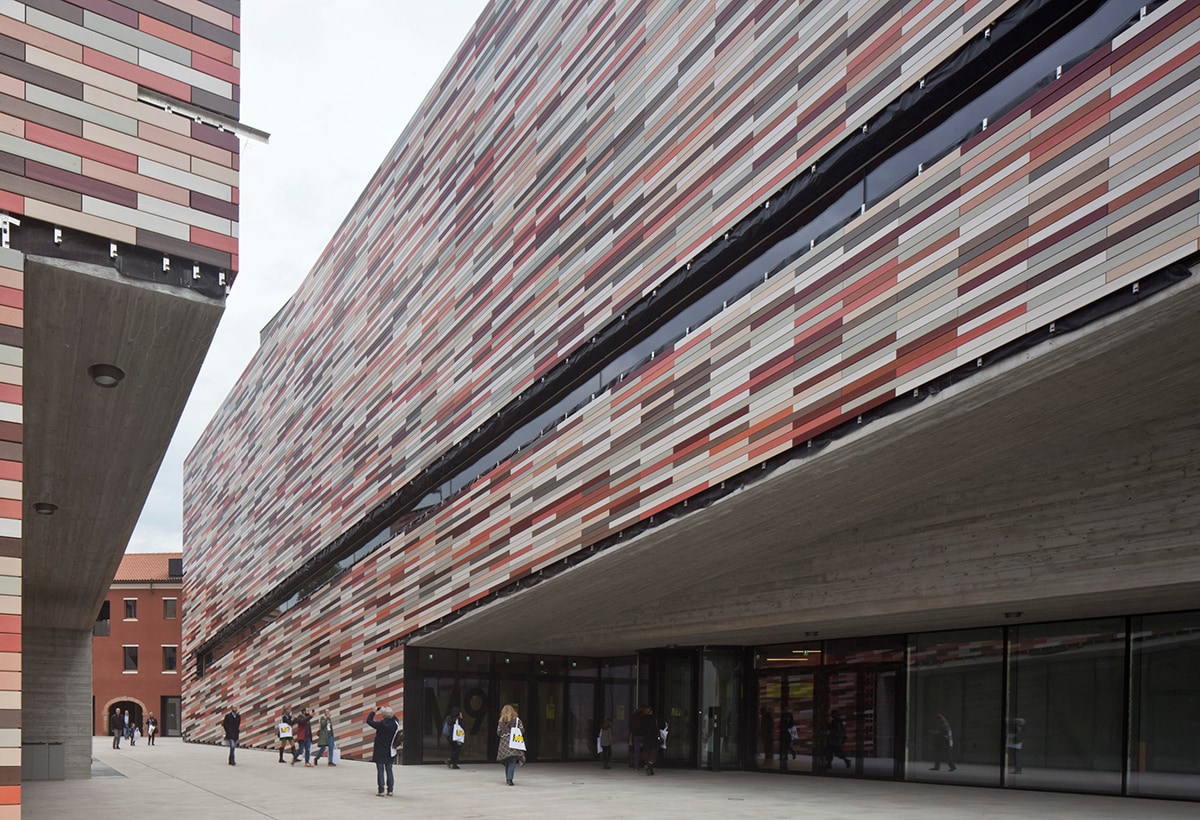 8
Partial and overall views of the new M9 multifunctional complex in Mestre, designed by the Berlin-based firm Sauerbruch Hutton. The facades of the new museum building feature a multicolored pattern of ceramic pieces, produced in Germany.

This ‘materic luxury’ is one of the main characteristics of a vast integrated project that has involved the restoration of a former convent from the 1500s, to create retail spaces gravitating around the cloister, topped by a new transparent glass surface; the recovery of the two volumes of the former cavalry barracks from the Napoleonic era, finished in fair-face concrete; the renovation of an office building from the 1970s, now featuring a green roof.

There are six pedestrian walkways that establish a relationship, a programmatic connection between the internal 'piazza' of the new center and the city, ensuring complete permeability and use of the area. In addition, there is the important factor of sustainability: the German architects have made use of thermal mass activation, geothermal system with 63 probes at a depth of 110 meters, and energy produced by 276 photovoltaic panels placed over the buildings.

Finally, there is the innovative formula of a museum of the Italian 20th century, on two of the three levels of the main building, which focuses on the potential of a small “smart city” already in action: this is what makes the M9 of Mestre so unique. The narrative of the epochal changes of the 20th century in Italy is entirely multimedia, conceived as a set of interactive technological experiences. 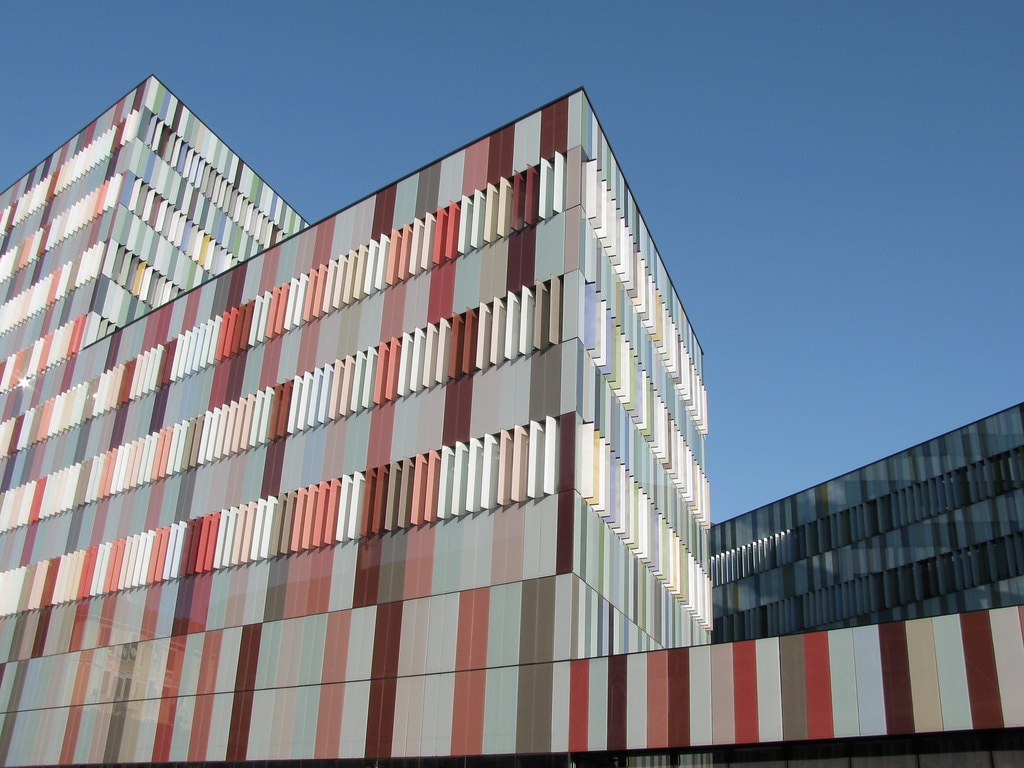 The ‘cultural assets’ of the 1900s, including cartographic, photographic, sound and AV materials, are accessed in immersive reconstructions inside black-box installations, arranged freely in the itinerary (the route can be selected by the visitor, depending on personal interests), in a fluid narrative subdivided into eight thematic zones, thanks to the contributions of historians, sociologists and writers. As well as designers, of course. The overall coordination of the internal exhibits is by Stefano Gris/Studio Grisdainese.

The installations of the eight thematic zones are by Carraro Lab, Clonwerk-Limiteazero, Dotdotdot, Karmachina-Engeneering Associates and Nema FX, specializing in building bridges between past and future. The Milan-based studio Dotdotdot, for example, has created digital and interaction design settings on Italian culture and identity, sections 7 (Being Italians: Education, background and information) and 8 (To be recognized: what makes us feel like Italians).

“
Understanding the qualities of the place and using them in a positive way to bring them into the architectural project. (Matthias Sauerbruch and Louisa Hutton)"

The permanent exhibits are joined by a third, very luminous level (in contrast with the black boxes) of 1130 square meters, with an open layout, to host temporary exhibitions in a flexible way, ranging from photography to design, art to technology. Because to reach a wider audience, a place of culture-encounter-entertainment has to offer a broad variety of experiences.

For this reason, in the multifunctional complex designed by Sauerbruch Hutton there are also areas for play and learning, media libraries, archives, an auditorium-cinema. And an art boutique (invented and implemented by Civita Tre Venezie), where a careful selection of design objects provides another (less immaterial) voyage in the extraordinary creativity of Made in Italy.