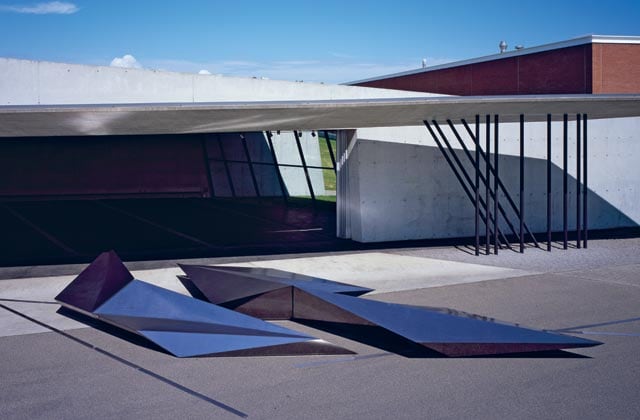 The first of the glamorous, photogenic works shown on the following pages takes us back in time, to the Vitra Fire Station (1991-93) of the Vitra Campus at Weil am Rhein, Germany.

The first large project built by Zaha Hadid, commissioned by the president of Vitra, Rolf Fehlbaum. The first example of the imaginative and narrative power of the works of the former student and assistant of Rem Koolhaas, this construction is now a contemporary architectural icon. The first female architect to win the Pritzker Prize, in 2004. In the background, the years in Baghdad, experience in America, a fascination with Malevich and Suprematist painting as a source of design inspiration. Today she is at the helm, together with Patrik Schumacher, of a London-based studio (with about 400 designers), working in Europe, the United States, the Middle East, China and Russia. The recent past, last summer, is the moment of Prima Installation. The tribute by Swarovski, which to celebrate the 20th anniversary of the completion of the Vitra Fire Station invited the Anglo-Iraqi architect to create an architectural installation of great sculptural impact. To position directly in front of the entrance to the nude building in reinforced concrete she designed back in 1993 – a dense, detailed intersection of surfaces and planes, along independent perspective lines based on the image of fire and speed. “Congealed movement,” Hadid called it back then, “tension of the state of alarm.” Metaphorically represented by the recent site-specific work: a faceted structure composed of five polyhedral elements with sharp corners and inclined planes, made with composite materials and covered with a skin of polished, reflecting metal with a gun-metal gray color. The overall size: 11 x 8 meters, with a weight varying from 300 to 500 kg. And with LED lighting built into the seats offered by each. The work evokes the dynamism of the interior walls of the Station, subjected to a spatial manipulation that seems to make them overlap, with large sliding walls. In the words of Fehlbaum: “Few other architects would have been able to transform what was basically a modest work into an iconic sign. Zaha did just that. This is due to her incredible sense of space and her radical vision of architecture and what it can represent.” (Antonella Boisi)