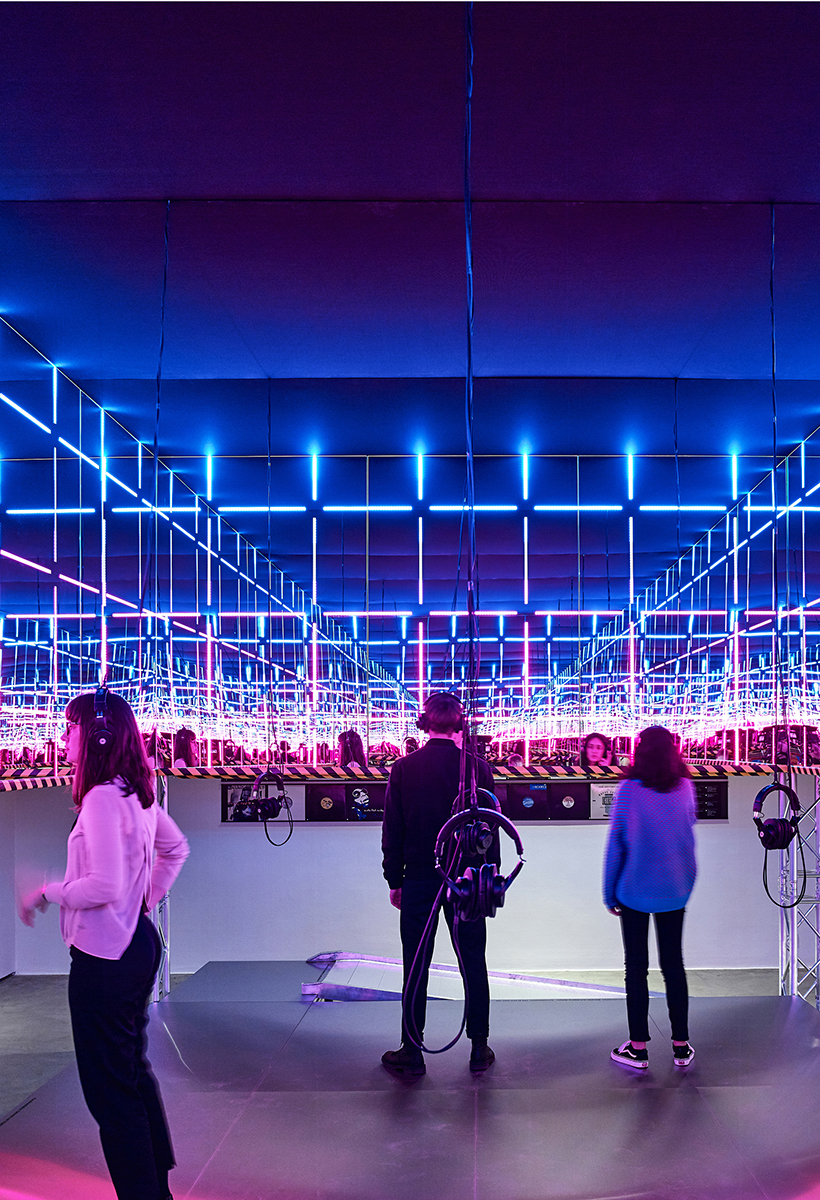 #design
The design of relationships

To reawaken recognition of the value of things, but above all to connected people. Konstantin Grcic explains how furniture can reclaim the role technology threatens to remove from it: designing beauty and intelligence

It had to happen sooner or later: hearing Konstantin Grcic talk about René Magritte. It was at the MAXXI museum in Rome, where the most industrial of contemporary designers spoke about the Alcantara seating of his design for Power to the Imagination, the installation created in February and curated by Domitilla Dardi to narrate the brand that makes an ‘impossible’ technological material. A work made with the Yeminite matte painter Najeeb Alnajjar, creator of imaginary backdrops for cinema. A powerful vision that has brought together, as on the silver screen, the fantasy architecture of three great Italian designers of the last century, Sergio Musmeci, Giuseppe Perugini and Maurizio Sacripanti, with the no less daring work, but closer to us in time, of the Lebanese architect Bernard Khoury.

In front of a surreal painting of realistic and fantastic images, nature and artifice, off-scale and detail that gaze upon gaze give rise to a ‘Magritte-like’ perceptional experience, Grcic addressed the meaning of being an industrial designer today. A very difficult meaning if even Grcic, the ‘process’ designer, solid and rigorous, who enhances the know-how of companies, pushing them one step outside the box, seems to seek refuge in fantasy. “Instead, this project is ‘simply’ my everyday work, perhaps a way to widen the field and to return to my activity that has changed somewhat. Today designers operate in contexts that are too fast and too commercial: the architects I honor here, instead, were like rockets shot to the moon, even without having access to the technology on which we can rely today. This is why they can serve as inspiration, to help us to recover a visionary approach that has perhaps been lost.” 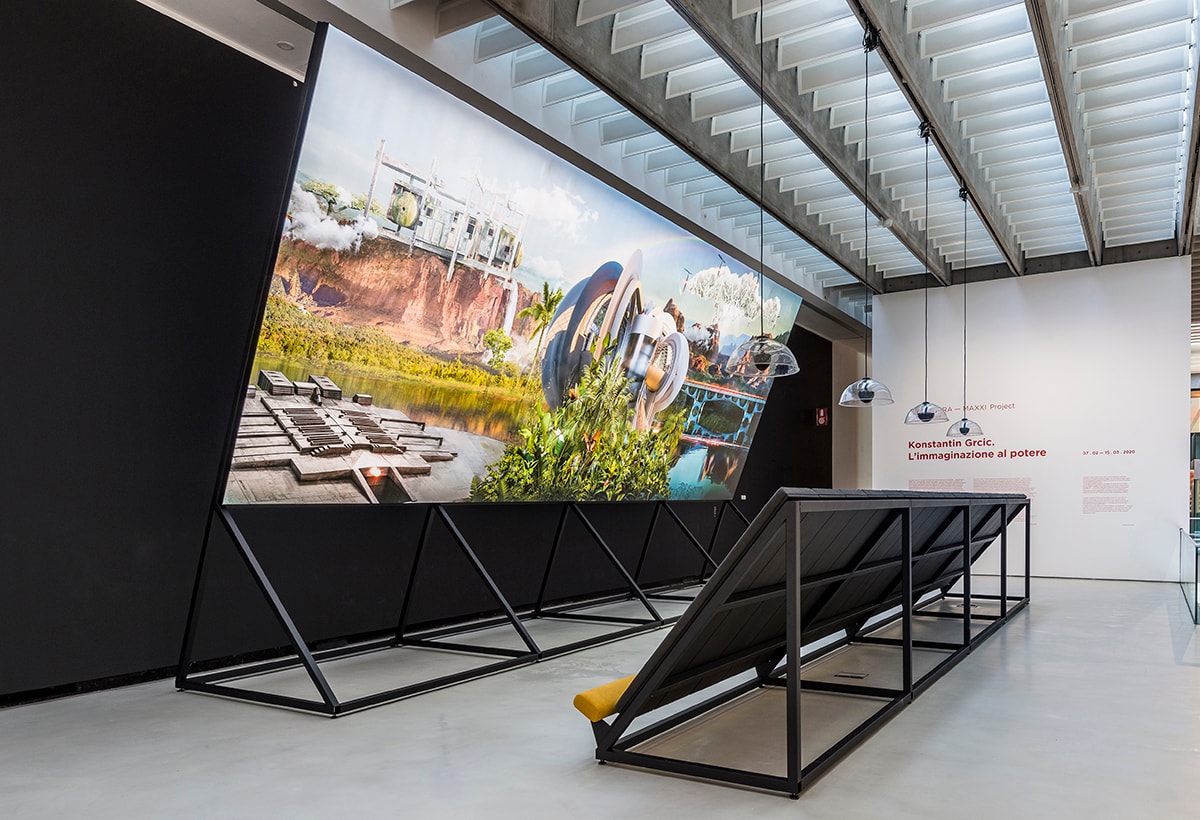 4
Power to the Imagination, the installation created by Konstantin Grcic at the MAXXI museum in Rome for Alcantara, curated by Domitilla Dardi. The visionary work, made with the matte painter Najeeb Alnajjar, shows works by Giuseppe Perugini, Maurizio Sacripanti, Sergio Musmeci and Bernard Khoury.

Talking things over, Grcic repeatedly expressed a sense of frustration which he attempted to mitigate only towards the end: “Today I find a visionary attitude in the digital, in electronics and the industrial design that gravitates around these fields. My world, on the other hand, the world that has made furniture history, seems to have lost the ability to bond with every aspect of human life, to design and accompany changes in people and society. It is as if furniture were no longer able to come out with new proposals. And it is frustrating to observe how those who work with digital means are happy to live surrounded by vintage furniture. Yet the industry has to have the force to change and to return, as in the 1960s, to perceiving the fact that inside an object there can be a sense of freedom, a vision projected into the future. Now it is as if product design had lost its credibility with respect to technology and services. We are at a sort of impasse: for these projects, like the one for Alcantara, there have to be new stimuli, to bring new impulses into my studio.”

But what does it mean to have a vision, today, for a designer active in the furniture industry, concentrated on designing infinite variations of already existing products? “No one reprimands the fashion industry for continuing to redesign shirts and trousers: fashion has managed better than other sectors to convey the illusion of continuous renewal. We product designers always have to start with those who came before us, adding one new piece: this is how forward progress is made. With my furniture I do not pursue nostalgia, but the lesson contained in things of the past, things well made.”

Another fundamental aspect, Grcic says, is to trust in the attitude of endowing objects with a sort of intelligence capable of developing relations between people and things, people and other people. “The intelligence of objects is fundamental. One of my most famous pieces, the May Day lamp for Flos from 2000, is an object that ‘connects’ in the sense that it encourages the user to understand it and utilize it, fully exploiting its possibilities. Over the years this ability has been transferred into technological devices, such as smartphones today, which become extensions of the person. So May Day is a lamp, but it is also somehow an extension of the user. With the difference that the iPhone has the problem of obsolescence and has to be replaced from time to time, even though we never want to separate from it. The challenge for a designer, then, is to make projects that are relevant for people and their lives, just as smartphones have become. Good design means furnishings and objects with a personality, that establish relationships with us. It is up to us designers to give them life.” 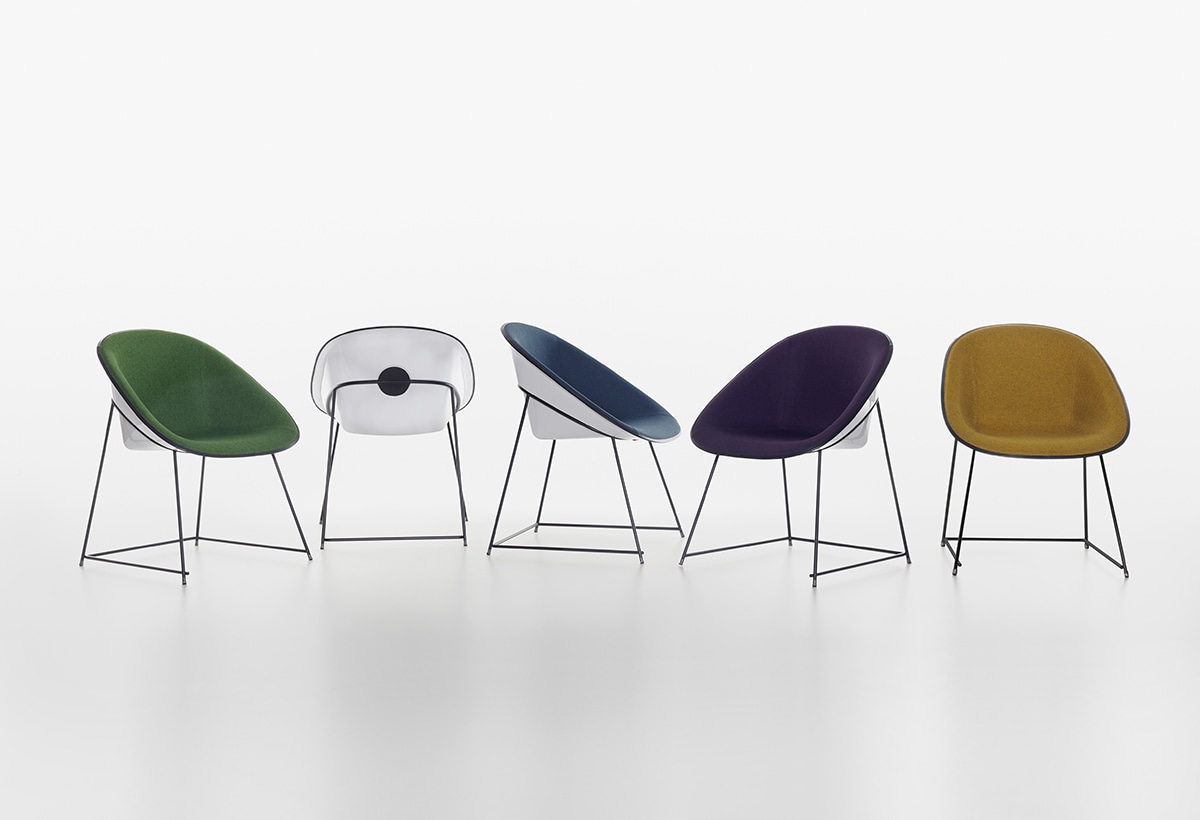 5
The Cup lounge chair for Plank.

The challenge is far from simple, because in these years the feeling of belonging has gradually shifted from objects to services, property to sharing. But is that really the case? “To begin with, not everything can be shared, though of course the sharing economy is changing reality in the right direction. And I also find that there is not enough design in certain fields, like bike sharing, for example, a sector in which I see too many vehicles stranded on streets because those who use them do not recognize their value and their beauty. A designer has to generate that beauty, because people tend to value and respect beautiful objects. I don’t want to seem nostalgic, but perhaps the previous generations were more accustomed to appreciating this value. I am convinced that the younger generations will soon understand that a service without something beautiful, to touch, makes little sense.”

Grcic stopped for a moment, to backtrack in his thoughts: “I have repeated said that I feel frustrated, but don’t get me wrong: my outlook on where design is headed is positive. We are at a crossroads; we live in uncertain and therefore stimulating times. Thirty years ago the word design was associated with purely aesthetic realities, but today it has become part of the vocabulary of politicians. Design can play an important role in our lives. Let’s enjoy this moment in which design is perhaps becoming something different.”

The interior is dressed in pop art

The performances – scenic – of design