The music of design

The music of design
Schools, theaters and disco clubs, installations, performances and concerts: how are places where music is born today? The partnership between music and design is ever deeper

If during the FuoriSalone we were enchanted by the ' perceptive unicum generated by the ' intertwining of bamboo, carbon fiber and music staged by Kengo Kuma for Interni Creative Connection in the Cortile d'Onore of the University of Milan (see l 'installation Bamboo 竹 Ring: || Weaving a Symphony of Lightness and Form), the tendency to include music in architecture and design projects it does not seem to stop. Protagonist or supporting actor, it fluctuates, reverberates and spreads, enveloping spaces and people and amplifying their sensations.

From the restoration of schools and theaters to vinyl shops that recall the disco clubs of the ’ 60s, up to installations and concerts. We have seen and heard several projects; of some - the most pervasive - we recorded the soundtrack (and emotional) to reproduce it, in our own way, here. 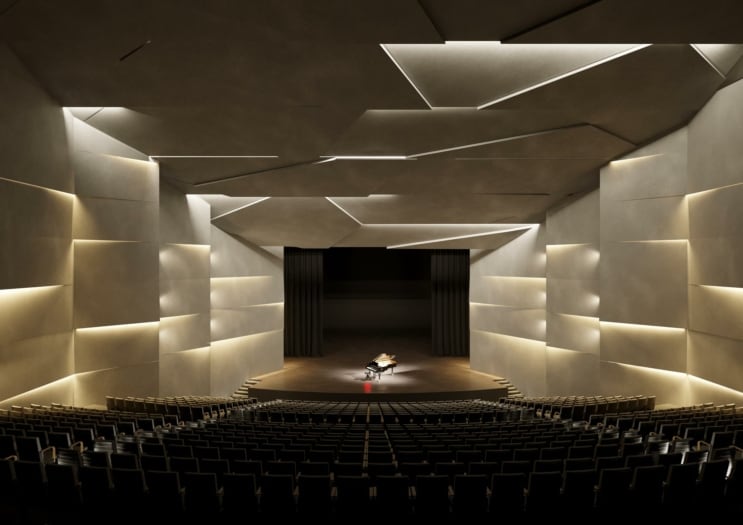 In Bressanone an open-air wunderkammer opens up to the city

Wunderkammer, the Music School of Bressanone, an institution founded in 1961 that welcomes over 1000 students, has been completed. With a compact and recognizable volume, the project by the Carlana Mezzalira Pentimalli project looks at the historic city with its principles settlements, reinterpreting the archetype of the enclosure which gives it a strong transversal permeability.

"One of the peculiarities of the project is the 'garden of music', an open-air room finely decorated, inside the enclosure and yet outside the school volume, which dissolves the boundary between inside and outside. The ambitious attempt to tame an urban space" explain the architects Michel Carlana, Luca Mezzalira and Curzio Pentimalli. "Hence the name Wunderkammer (chamber of wonders), in reference to the historical period in which the private collections opened to the general public, making mirabilia accessible until then within the reach of a few. In the same way, we understood architecture as a community environment available to all".

With the addition of red porphyry and pigments aggregates, the complex, entirely in exposed reinforced concrete, achieves a color and materiality that blends well with tradition and local materials. The only treatment given to the surfaces to make them vibrate in natural light is the bush hammering entirely hammered by hand with a motif taken from the typical local textures. The monumentality of the external facades contrasts with the ‘familiarity’ of the interiors that draws on collective memory.

Two windows at 11 rue du Vertbois, upper Marais, for the new Rupture Record Store in Paris, an independent store and record label (folk and rap) founded by Alexander Sap. For the interior project of the new vinyl store as well as bars and cafes, Pierre Gonalons was inspired by the authentic spirit of the place, drawing on the memory of the legendary Drugstore Saint Germain, which in the years ' 60 was at the same time a bar, restaurant, tobacconist and emporium.

In Rome, a musician’s house is also a studio with a jazz soul

A dark and fragmented apartment inside an elegant 1930s building in Rome has been transformed into a bright and functional home-studio. The project by the Margine studio has amplified the permeability and versatility of the environments. The owner, a jazz musician, wanted, in fact, an open and welcoming home, characterized by a living area halfway between a concert hall and a living room.

With a particular pentagonal conformation conceived to host jam sessions and impromptu musical events, the room is emphasized in its minimalism by the boiserie of vertical oak strips, which, like the case of a mysterious musical instrument, organizes the paths and hides the service spaces. At the same time, the slat system refines the acoustics of the space.

In Bergamo the golden light is theatrical

The complex renovation and restoration project of the historic Donizetti Theater in Bergamo has recently been completed, name of the homonymous composer from Bergamo known all over the world. Catellani & Smith was chosen to illuminate part of the project, with creations immediately visible from the large hall.

Among the various luminous creations of the company from Bergamo, Lederam C180 stands out. From the circular shape installed on the ceiling, it enhances the sumptuous frescoes depicting floral motifs and female figures, creating an interesting contrast with the purple walls, while the coating in gold-colored leaf dialogues in continuity with the golden ceiling. 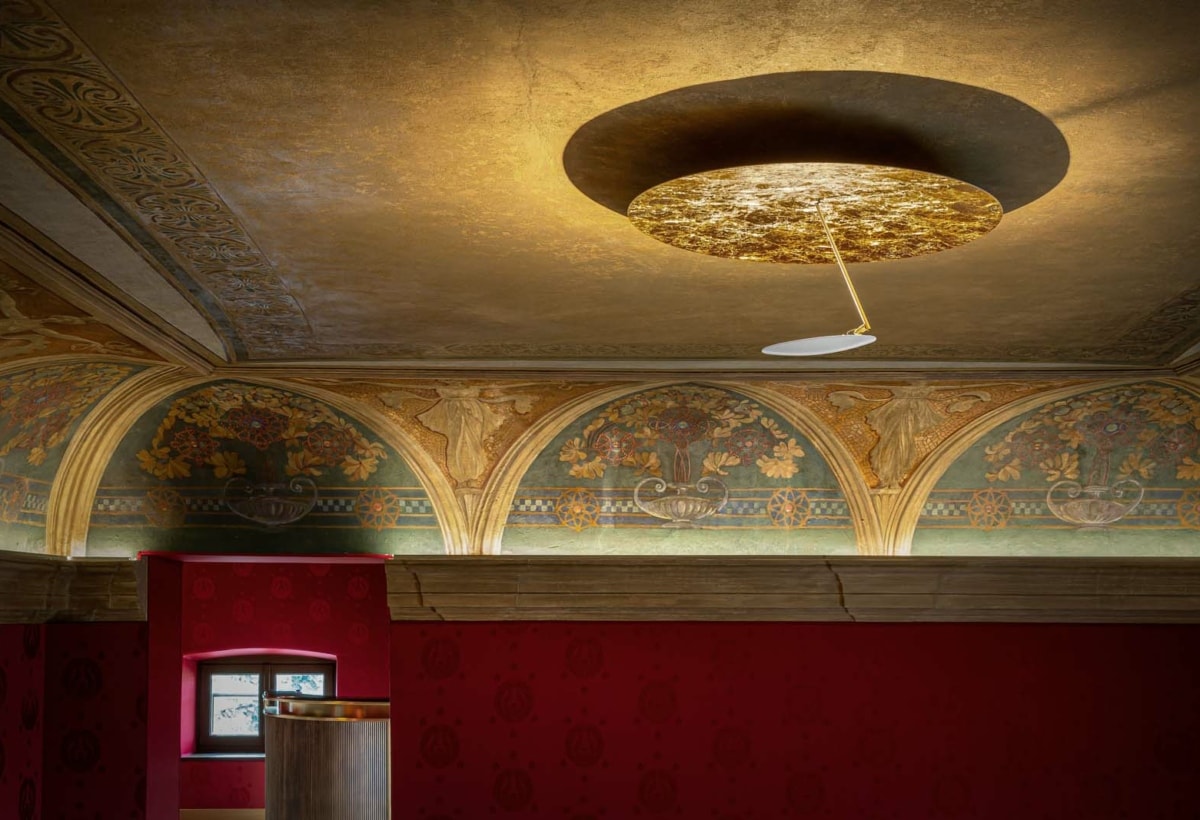 In Mantua the relationship between music and painting is investigated

Welcomed in a dimly lit space, already from the threshold, the viewer is attracted by the luminous elements and sounds emitted both by the works on the wall and by the installations on the ground. What he lives is an aesthetic experience multisensory, amplified by the context, the majestic Palazzo Te of Mantova.

Until December 19, 2021, the Tinellis host the installation Limen of Paolo Cavinato in dialogue with the sound environment of the composer Stefano Trevisi, third edition of the project room Sonographies, the research project conceived by Palazzo Te Foundation with the master Leonardo Zunica investigating the relationship between music and painting. 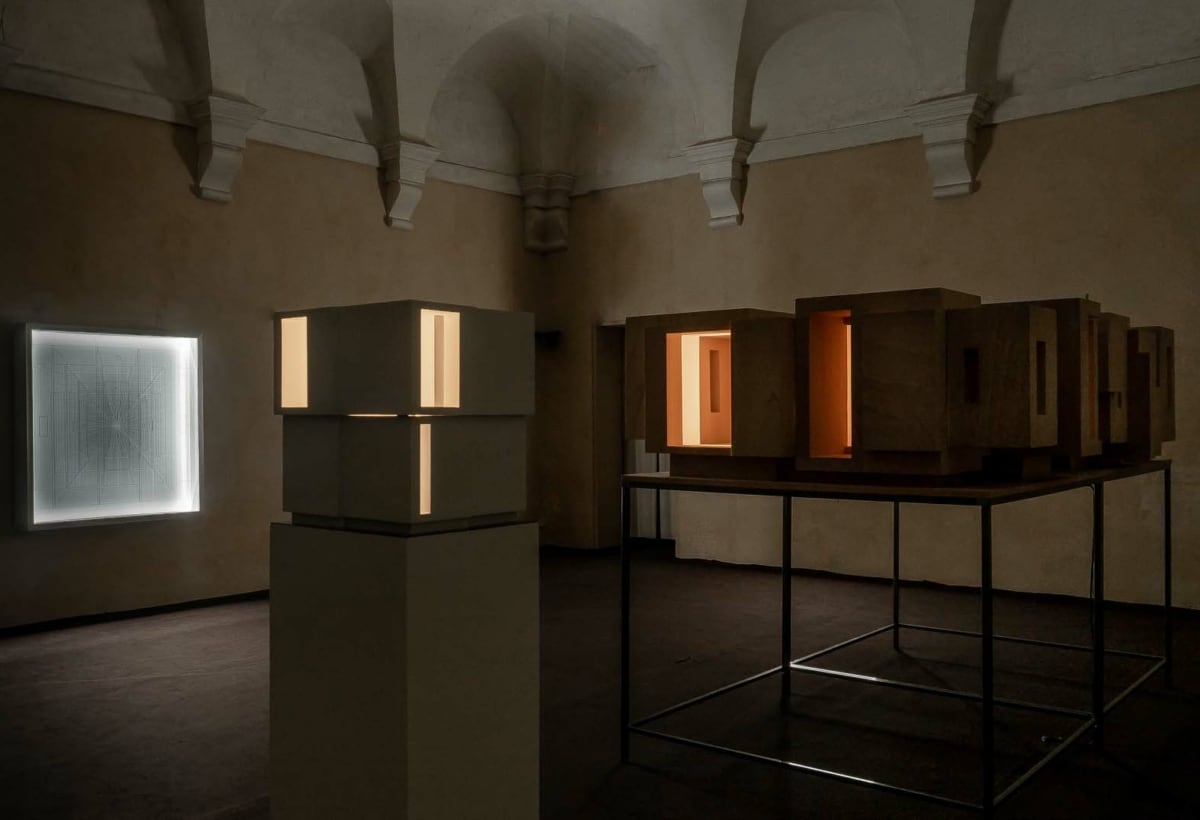 The installation consists of four works: the luminous three-dimensional drawing Limen which looks like a vision, a fluctuating spectrum, evanescent and impalpable, Luce, the small sculpture, which refers to ghost architectures, Cosmo, the luminous three-dimensional mandala made with fluorocarbon threads starting from precise mathematical calculations and the wooden installation Lost in which we find the dimension of the labyrinth. Here the viewer is immersed in a cloud of dense spectral bands - multiple breaths of the surrounding space - whose materials come from extremely reverberated resonances of Chinese cowbells and gongs. 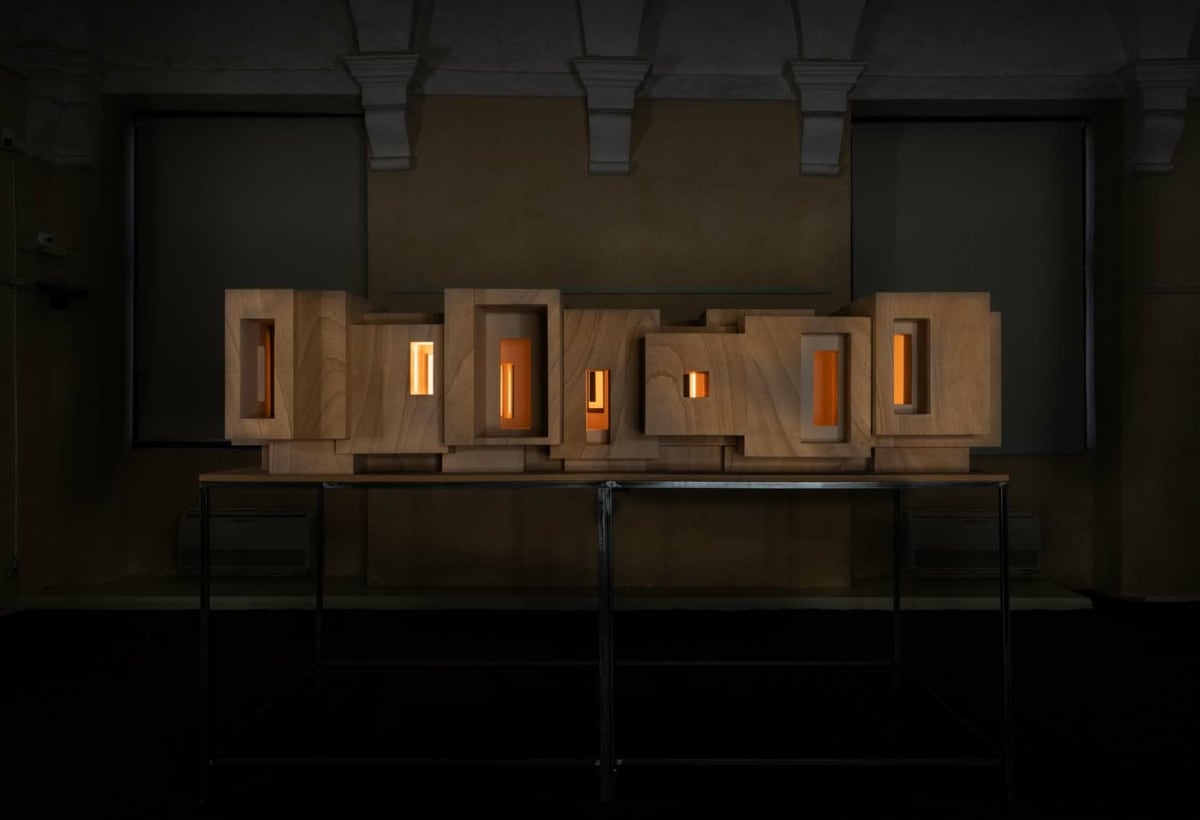 Light that is felt, an emotion that spreads

Music can also be the key to devising a new way - perceptive - to tell a product. With the Light that feels project, the lighting company Sylcom stages a concert-installation .

Four sheets separate the piano from the trumpet, the harp and the cello; the musicians perform the song My Orchestra with an arrangement created ad hoc for this live performance with the voice of Marco Guazzone; from above, four chandeliers throw light on the elusive essence of art: an emotion that spreads . 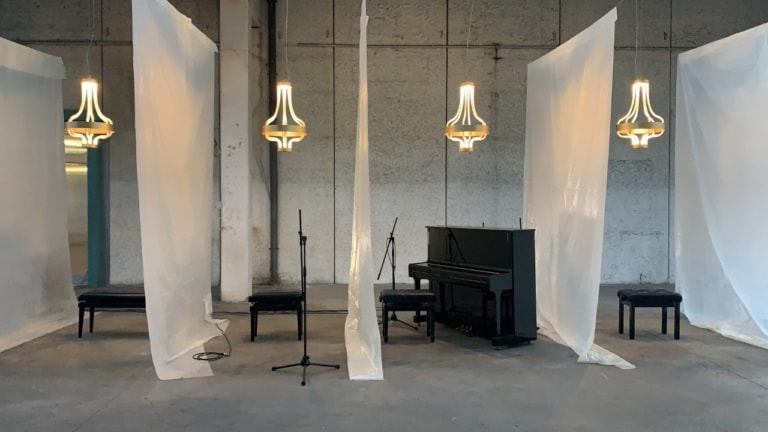 Musicians cannot see each other, they can only perceive each other through the fabric and recognize each other from the music emanating from their instruments. They cannot look at each other, but they must listen to each other. It is the light that holds all the ingredients of the experience together.

The Festa chandeliers, designed by the art director duo Debonademeo, embellish the spartan, geometric and 'set'. The luminous bodies illuminate the space occupied by the individual artist from the top , with the precision of theatrical spotlights but with opulent lines that refer to ancient glories, dried all ' essence, to give back a ' contemporary soul. 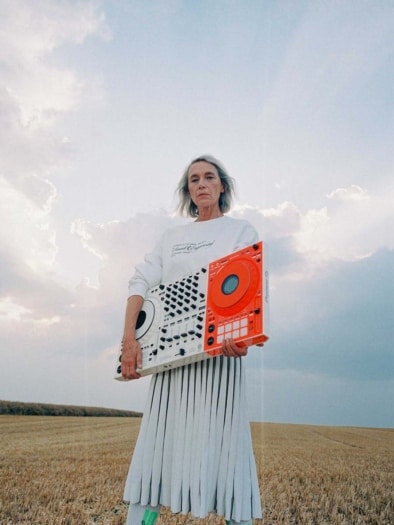 On RadioDesign the designers unveil their personal soundtrack

The architect and journalist Danilo Premoli, design expert, in particular of office sector, on his blog Office Observer edited with Stefano Lazzari with a column - RadioDesign - which periodically invites a designer, an entrepreneur or a critic to reveal his personal soundtrack and to compile a list of seven titles collected in a playlist on Spotify that can be freely listened to. Each month, a meeting with the invited authors and the subsequent podcast, which is published on Office Observer, compares the different experiences and emotions generated by the chosen titles. 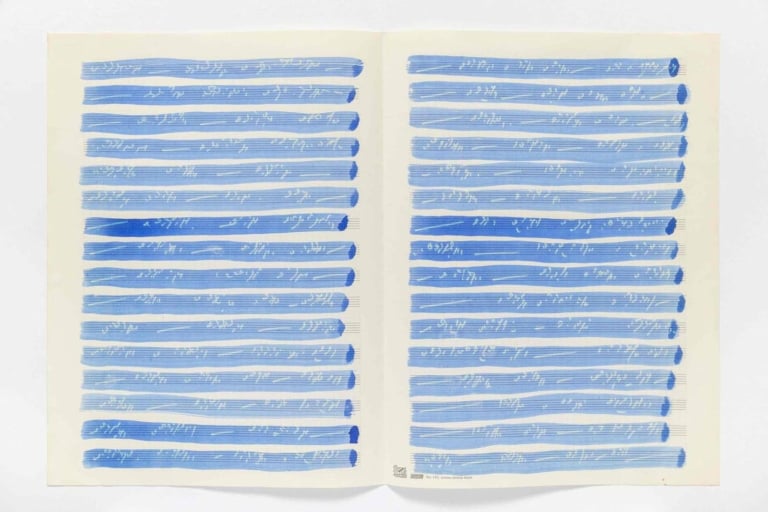 Let's toast to the holidays (each in his own way)

The warmth of (cold) Christmas