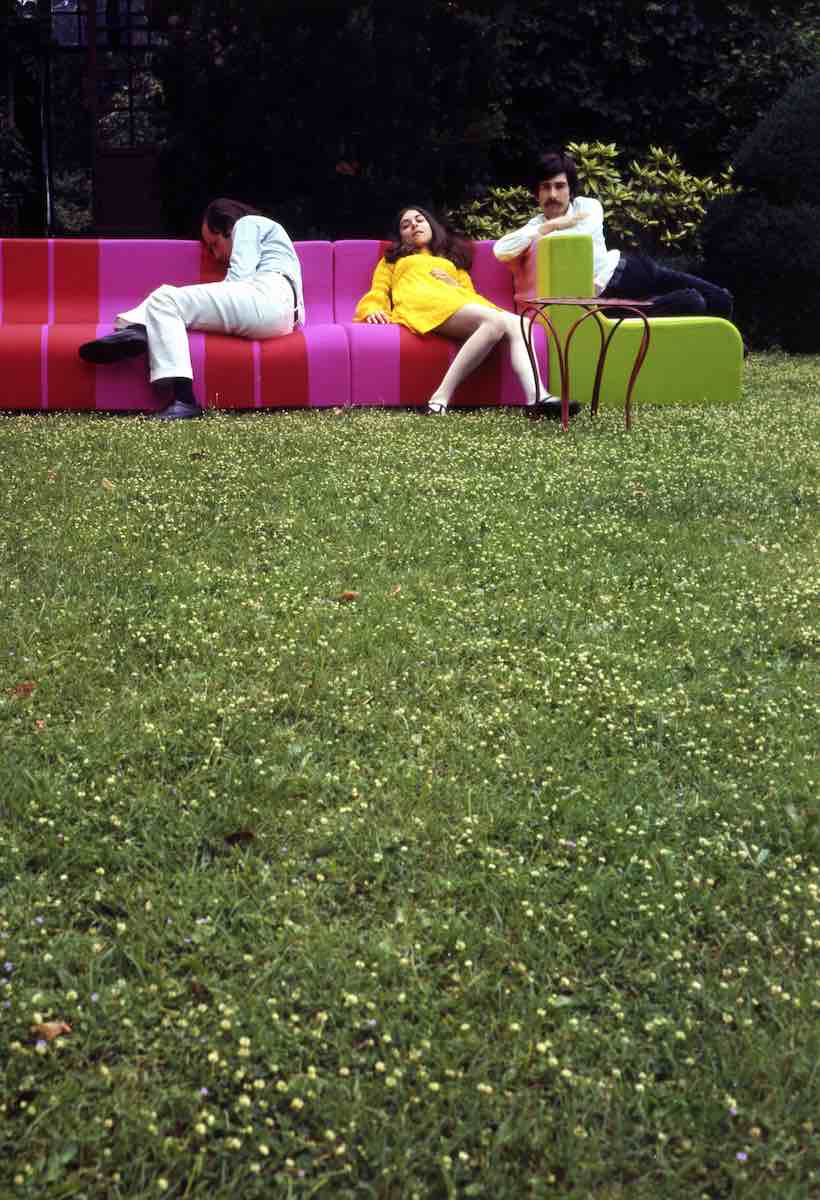 Radical
What remains of radical design 50 years after the MoMa exhibition?

In 1972 the exhibition that would bring Italian design to the fore in the world was inaugurated at the MoMA in New York: Italy, The New Domestic Landscape. But looking at what remains of that fire today, are you still arsonists or would it be more correct to consider yourself firemen?

On the cover of the Keep Your Soul Together album, African American jazz trumpeter Freddie Hubbard reclined on a Bocca sofa by Studio 65 for Gufram in a photo of Pete Turner. The record arrives in the windows of New York record stores in 1973, a few months after Italy: The New Domestic Landscape. Artwork for Keep Your Soul Together album by Freddie Hubbard, CTI Records, 1973.

A watershed exhibition between a before and an after not so much in Italian design, as in its awareness on an international level.

Although Bocca was not present at the MoMa, the fact that a sofa created by a collective of student-protesters from the faculty of architecture of the University of Turin had arrived on the cover of an album by one of the legends of jazz stars and stripes, it is undoubtedly a prime example. Who knows if Hubbard was inspired by MoMa, like his colleague Coltrane by the Guggenheim on whose elliptical stairs designed by Frank Lloyd Wright he had himself portrayed only a few years earlier. 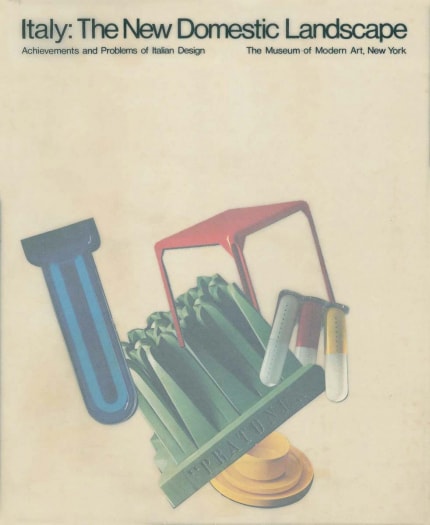 The catalog of Italy: The New Domestic Landscape, today an object coveted by collectors

50 years after the exhibition, we must ask ourselves not so much what remains today of jazz - in excellent shape - but of radical design: defused utopia, divertissement, or burning fire?

Those who, like the author of this piece, grew up in the Piedmontese province of the Two Thousand - the same as the Studio 65 - has most likely had to deal with specimens, or a lot more likely budget copies, of radical design pieces among bars, clubs and discos with dubious taste.

This highlights how over the decades these pieces have become - pardon the pun - radically part of Italian popular culture and not, so much so as to make them immortal even outside the only and restricted circuit of collectors for which they were initially conceived. 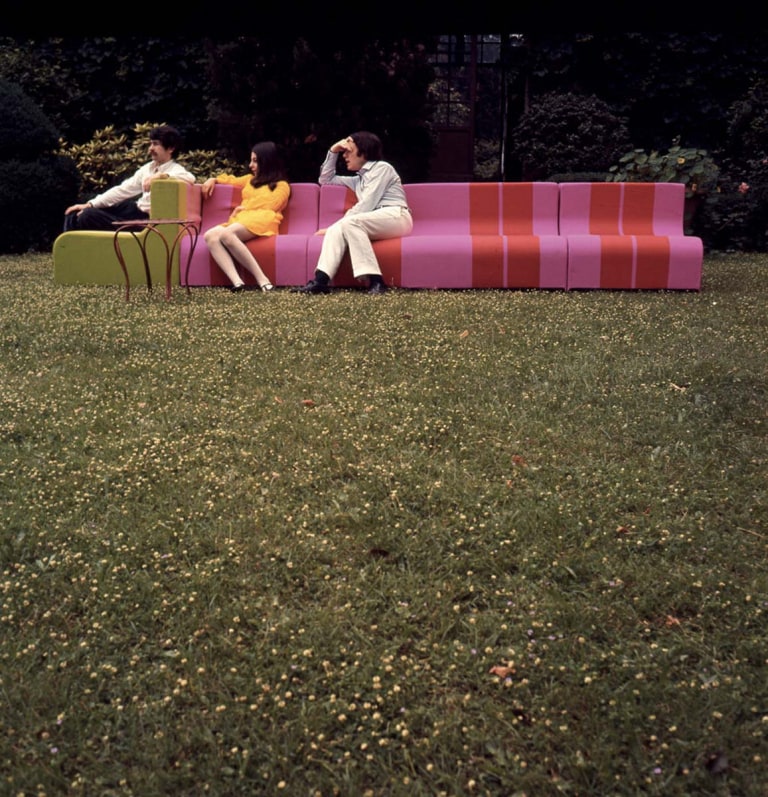 The paradox of radical design

A fate far from that desired by Ettore Sottsass Jr., Who, interviewed by the Artforum magazine at the inauguration of the exhibition, illustrated his abundant use of plastic as necessary for the creation of "furniture from which to feel so detached, disinterested and little involved as to have no importance for us".

With this in mind, Charley Vezza, ceo of Italian Radical Design, a group that brings together the ownership of Gufram and Memphis, analyzing the differences between the two collections born ten years apart, explains: “Today Memphis can enter the homes not of everyone, but of many. Here lies the real revolution: going to recover the spirit that was there.

While Gufram was born collectible and will remain a collector's brand, Memphis can now do what it originally wanted to do [...]: it can enter the homes of those many exponents of a global market of art enthusiasts, design, culture, which was not there at the time."

A global market which, in Vezza's words, also includes China, politically close to various designers of the time, but undoubtedly far from their original customer target. 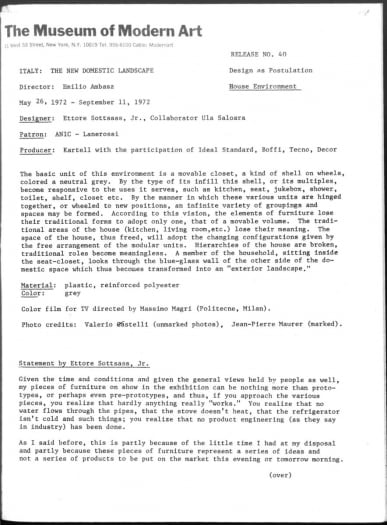 The protection of the heritage

The worldwide and cross-class success that radical Italian design is experiencing today can also be found, if not above all, in a shrewd work to protect and celebrate heritage.

Think of initiatives such as the one that brought Pratone Gufram among the passers-by of the center of Milan during the last Design Week. Or, again, to the series of volumes of the Poltronova archive that dedicate a substantial number of pages to the present day of their products, from the use of Superonda by Archizoom Associate in music videos with the active involvement of the social audience.

Proof of this is the fact that there seem to be more Ultrafragola in London - between upmarket restaurants and pubs for young professionals who have never truly emerged from the Alexa Chung phase - than this writer ever has. seen in Italy. 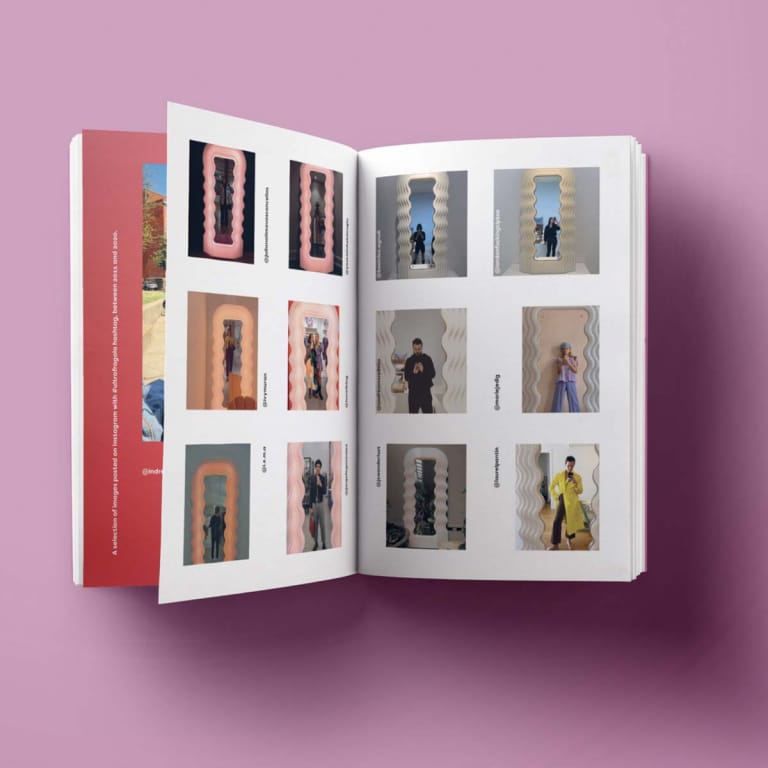 The monograph dedicated by Poltronova to the famous Ultrafragola by Ettore Sottsass Jr. - Credits: Centro Studi Poltronova and Fortino Editions.

The opening words of collectible design

After all, one of the great legacies of radical design lies in having anticipated the idea of ​​elite collecting in times when, as Vezza explains in relation to Gufram, "there was still no concept of collectible design, a word in vogue for only ten years."

If Gufram is not for everyone, its successful series Guframini still offers its icons in a practical santino bedside format.

The break with modernism and Morris-style accessibility

Among these is also included the reinterpretation of the Cactus by Drocco and Mello made by Toilet Paper in 2013. The magazine founded by Maurizio Cattelan and Pierpaolo Ferrari is undoubtedly - especially in his partnership with Seletti - one of the few companies still capable of interpreting the radical spirit is contemporary, indeed making it accessible with a philosophy similar to that of William Morris.

Philosophy that has also accompanied Memphis, born in 1982 precisely with the intention of creating a break with modernism, entering everyone's homes, while not finding a mature market yet, as Vezza observes.

Is radical design anything but radical?

In the commercial success of the Italian radical design objects we can at the same time find the criticism, anything but negligible, that Robert Jensen of Artforum moves to the New York collective, in an article on whose title - “The Italian design show at MoMa: a postmortem” - is all a program. The American journalist sees, in fact, the creations of the Italians as anything but revolutionary since at the heart of the exhibition there were political (Ministry of International Trade) and economic (FIAT, Olivetti, AGIP, Eni, Alitalia) institutions.

A critique in which we can, however, find a certain far-sightedness of the designers in question in anticipating the almost total impossibility of contemporary art and culture to stand on its own feet without sponsorships and compromises. A mindset that also extends to journalism as an advertorial rather than a critical practice, or to influencing as a profession of the Righteous Man of the 1920s. 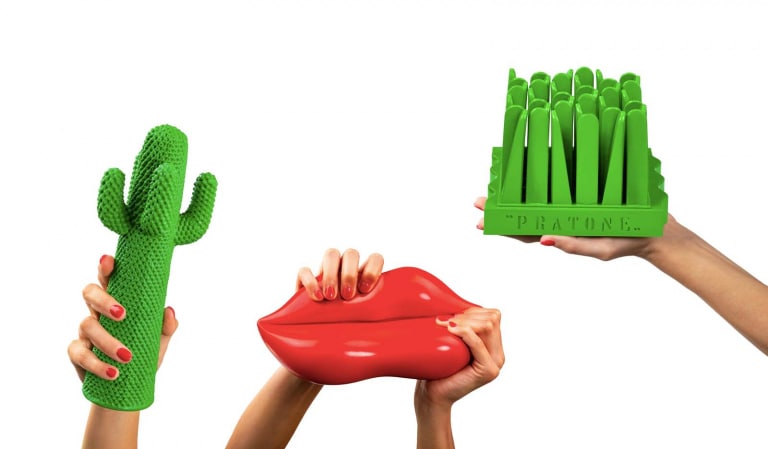 When the state and institutions promote the "revolution"

At the same time, the strong state participation in the success of the exhibition is today a reminder of a season in which the Italian industry knew how to impose itself on international scenarios, beyond Great Beauties and the commodification of tomato pappa. As Jensen points out "Eugenio Cefis, former president of ENI, had a clear vision of the potential that this project could have for Italian industry."

If environments are more radical than products

It is in the part of the exhibition dedicated to the creation of radical environments, undoubtedly the most conceptual one, that, absurdly, one can find the great contemporary pragmatism of the artists in question. Joe Colombo spoke of how design should be done "more and more for man, rather than the other way around".

A phrase that, although it makes us think of how the plastic euphoria of the Boom today makes reflections on the anthropocene and on the protection of the environment indispensable, at the same time is combined with the design of domestic spaces that are increasingly synergistic to the needs of man at the in the aftermath of the pandemic.

Indeed, it is precisely the modular housing solutions presented at MoMa by Zanuso and Sapper with their capsular mobile home and - in a certain sense - also by Karasutra - the self-dwelling in the style of the mime's convertible by Blow Up - by Mario Bellini a carry out this concept. 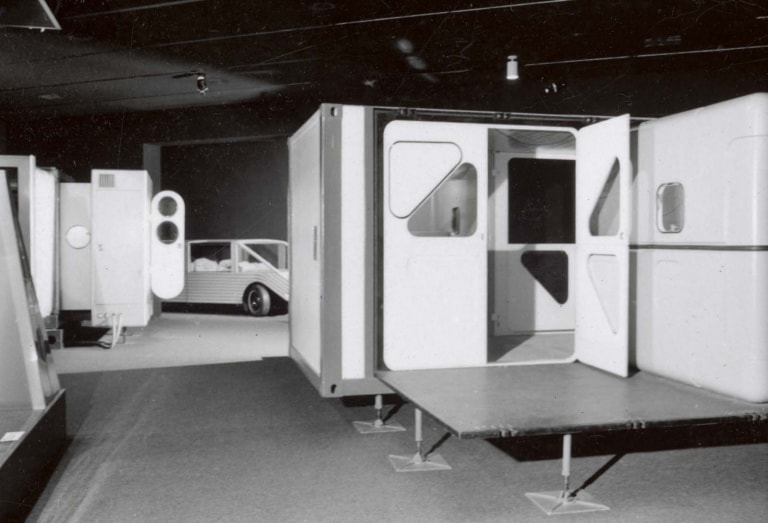 Indeed, Enzo Mari who provocatively presented an empty environment in which it was the recorded voice of a little girl that allowed the spectators to imagine it and make it their own, was a forerunner of the concept behind the building and virtual collecting of NFT, now so dear to designers and stylists.

So what remains of radical design today?

The playful and provocative nature of many of these objects has made them so famous in mass iconography, that today many attempts to make radical - and not radical - art a semantic cul de sac. To the point that it is not only difficult, but almost useless, to insist on producing radical design that goes beyond the reproduction of already historical and established objects. 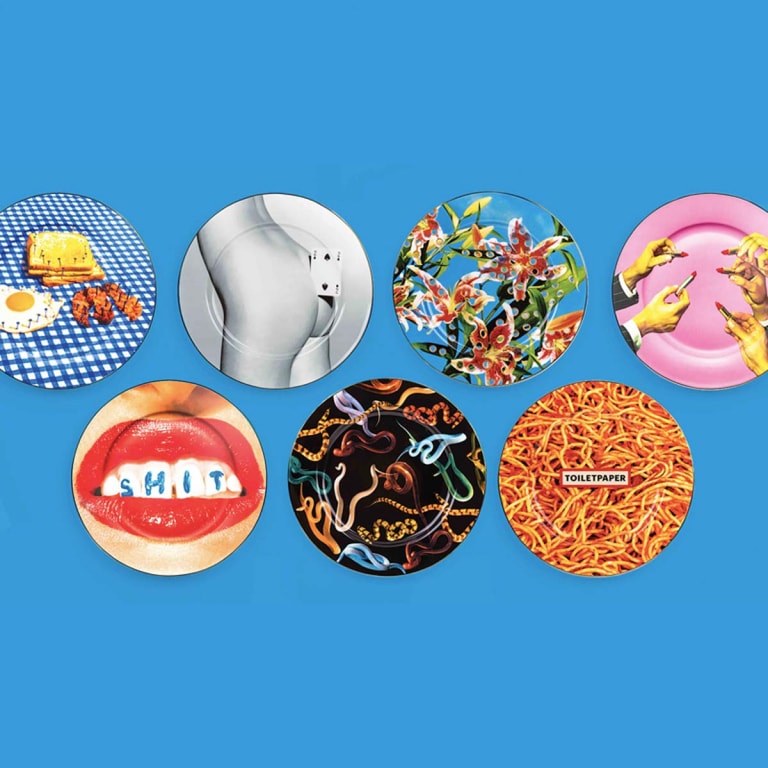 From arsonists to firemen

"You too will become an accountant", so he once joked with an exponent of the golden generation of radical design to tell the story of the transition from arsonists to firefighters of many of his colleagues. Once the Contestation is over and the radical disruption in the dominant culture has been absorbed, the works in question can therefore only pass from acts of militancy to status symbols.

Their desirability has also meant that in the current society of democratization of access to luxury it is even possible to rent works that wink at radical design, such as the plastic zoomorphic sculptures of Cracking Art. Or to satisfy the craving for possession of a status symbol through illusory declinations such as Guframini.

The insights of Memphis even find themselves, totally defused in their original function, to set the stage for the reality show LOL, hosted by Fedez and produced by Amazon. It is difficult to imagine a more corporate and non-radical rear end than this.

If we gloss over, therefore, the reiterations of decades-old concepts - often no longer capable of being the bearers of that militant and disruptive language of the origins -, and we go beyond the reproductions that allow historical brands to stay alive, it is above all a philosophy - a mindset they would say in the showrooms where these items are sold - to stay.

In closing, the words of Vezza are emblematic: “We do not foresee limited editions, re-editions or new editions [of Memphis, ed]. There is already everything in that catalog: over 200 elements that include all the scales, both in size and in price range, from the furniture to the object. It is difficult to think of being able to add anything, what there was to say has already been said".