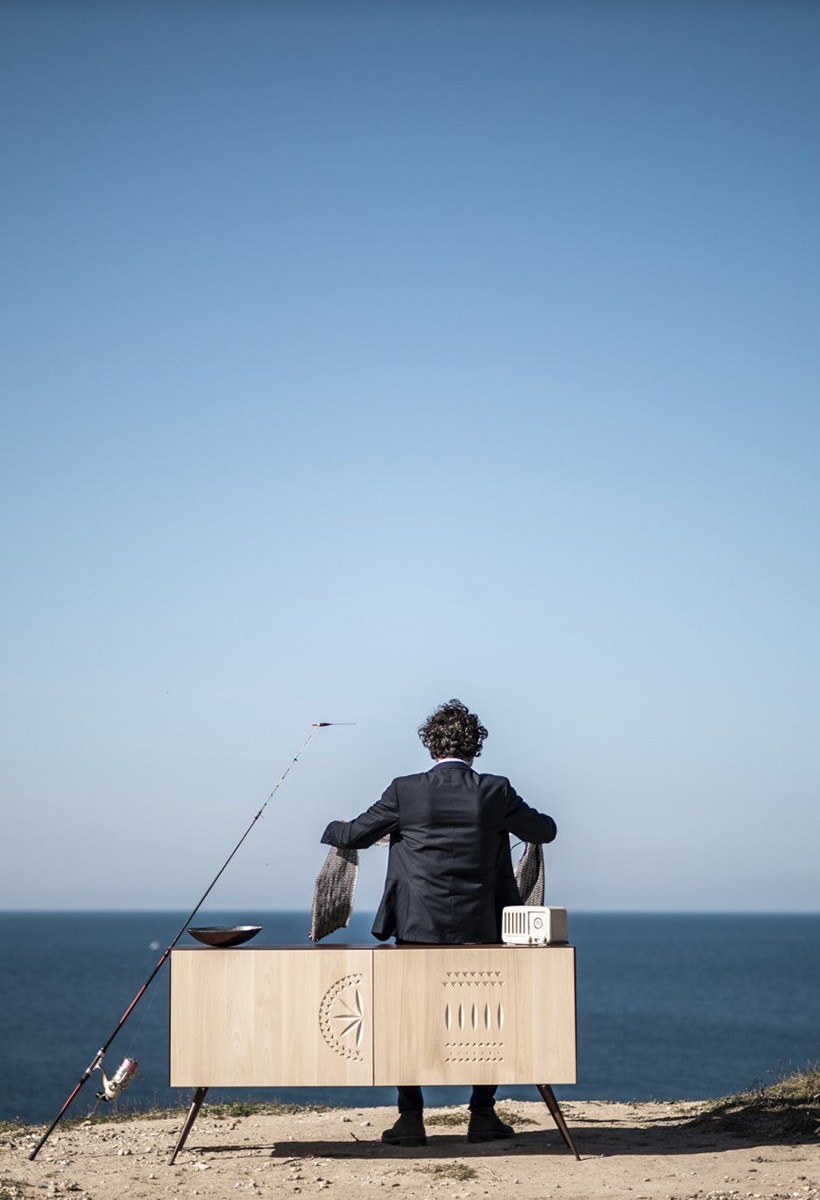 After months of images alone, it's time to re-educate ourselves in beauty. That's how. Between exhibitions, books and workshops

Touching design, for those who love it or want to discover it, should be an everyday habit. Because we cannot say that we are really passionate about something (or someone), without experiencing what Ettore Sottsass called “sensory thrill”, “frisson”, “erotic emotion”. Yet, after more than a year of contemplating design mostly in front of a monitor, we should perhaps admit that we all need a healthy sentimental re-education to things. A sort of emotional apprenticeship that, in this delicate phase of rebalancing between a first we know very well and a still uncertain then, throws us back headlong into that material, tactile dimension, without which there can be infatuation, but not love. Among books, exhibitions, schools and historical pieces of design, we have collected four indications that somehow seem to respond to this need. 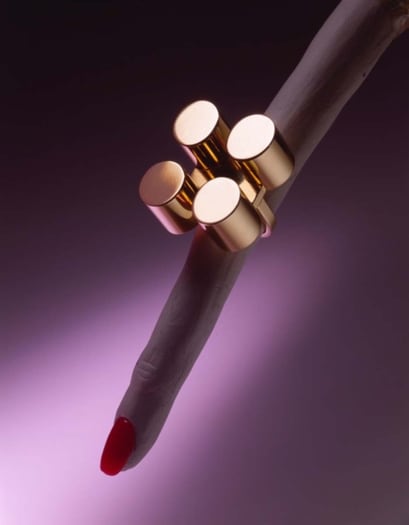 Assembling an example of the Flos lamp by Achille Castiglioni and Pio Manzù is a perfect exercise to literally enter a design masterpiece and love it, not without cursing a little, as happens to the most close-knit couples. Although installing this glorious piece from 1971 is challenging and perhaps not for everyone. Not surprisingly, its assembly is the subject of spontaneous tutorials on the web. Chiara Alessi dedicates a chapter of her latest test Tante care cose (Longanesi, 2021) to the instructions for installing it: “Those of you who have tried to install it, once back home, will then have had to realize that, compared to the apparent familiarity suggested from the practicality of its packaging, Parentesi is one of the most difficult objects to install. So I decided to do a useful exercise with this chapter and explain once and for all how to do it. After all, perhaps, it is the most interesting way of describing such a complex project that has been around - and it seems the simplest thing - in the world ”. An instruction page follows, complete with a recommendation for buying the soap: it is used to slide the colored rubber part onto the bracket-shaped tube. 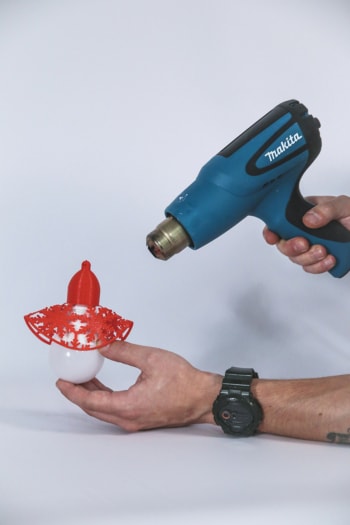 Repair a mocha with the 3D printerWe should all exercise the right (or is it rather a duty?) To repair a mocha or other everyday objects, especially now that we have such a large availability of new, disposable and low-cost tools, that we tend not to reuse anything“Today more than ever we must rethink our relationship with things, designing them so that they last longer and imagining a new life when they have ceased their official use, learning to separate them from their main and original function and to observe them for their potential. material, formal, tactile, perceptive”. These are the words of Alessandro Gorla, designer, teacher and head of the Factory of Quasar Institute for Advanced Design, a Roman academy that for over a year has set up a real fab lab with the latest generation machinery used to produce collections for sale on the e-commerce of the school, first initiative of its kind in the world for a design institute. 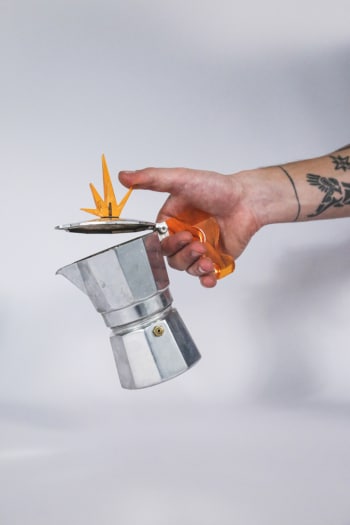 At the Factory we work on apparently small but valuable projects, fixing coffee pots, manufacturing 'prostheses' for pieces of concrete transformed into doorstops. “The spirit is what animated the Castiglioni brothers” explains Gorla, “but also the anonymous Russian design told in an enlightening book for me, People's Design, 220 inventions of post-Soviet Russia, by Vladimir Arkhipov, among old beds used as pontoons in lakes, boot heels that become bath plugs, coffee spoons to make soap bubbles and many other combinations”. 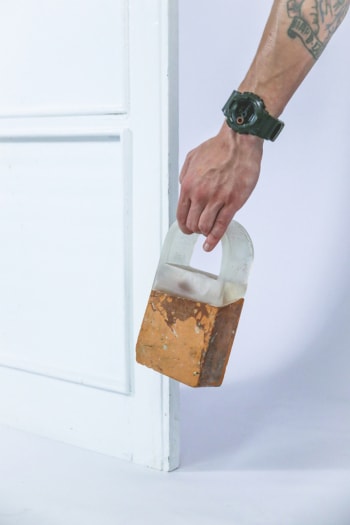 Discovering the house through the bathroom in Berlin by Emanuele Coccia

The latest essay by Emanuele Coccia, Philosophy of the home (Einaudi, 2021), is worth reading even only for the lines dedicated to the bathroom, where the philosopher reflects on the irreducibility of this environment to become a room like any other, despite the evolutions recent due to the design. The story begins with Coccia who goes to live in Berlin at the end of the last century and there, in the reunited German capital, he discovers the singular location of the toilet in the apartments: since the end of the previous century, the bathroom had been provided for health ventilation in the intermediate landings of the stairwell. Over time, to allow residents to wash themselves without leaving the house in the cold, a shower was provided in the apartments in the room where one would least have imagined it: the kitchen. “I had one too. Next to the sink, the oven, the dishwasher, the shelves with the packs of pasta, spices and oil, there was a Plexiglas cabin dedicated to cleaning my body. The gestures that usually led me to isolate myself in the bathroom coincided dangerously with those that opened my body to friends in the kitchen (…). It was not always a pleasant effect, yet it was this experience that made me understand that bathroom and kitchen were two morally distinct universes and difficult to reconcile”. That bizarre plan leads Coccia to rewrite customs, sensations, emotions. 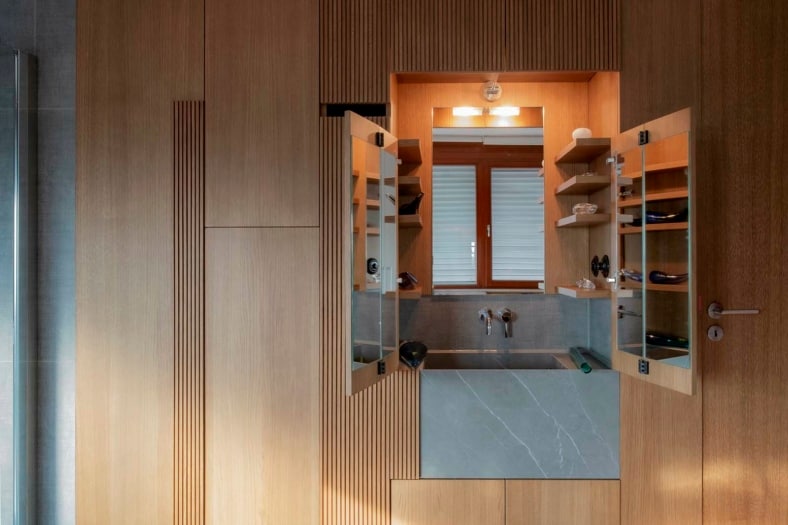 Ph. Massimiliano Lowe - In the renovation project of a bedroom in an attic in Prague, DVDV Studio Architects created a boiserie equipped with a sink that can be screened

In the short circuit of what seems to him a chimera, the kitchenbathroom, the philosopher discovers that designing a house means subjecting its inhabitants to a precise psychic plan: organizing feelings, emotions, form and ways of experience. In short, “it is the bathroom, which we usually associate with the more material functions of our domestic life, also and above all the heart of domestic psychology”. 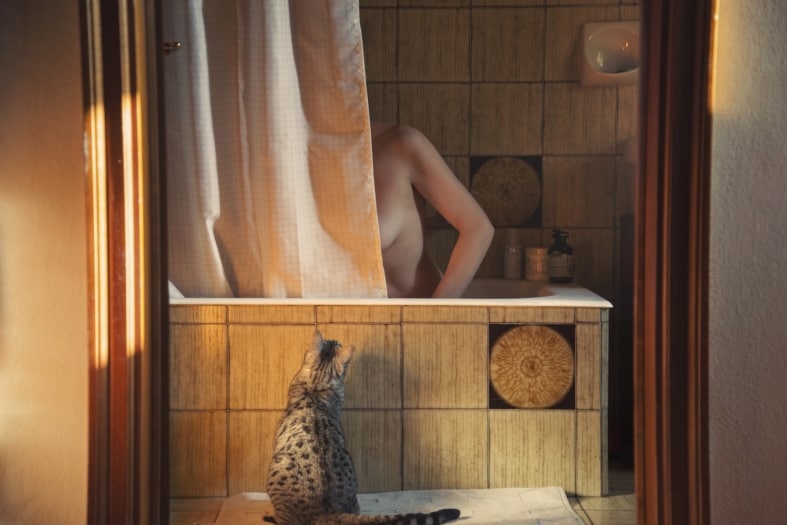 Ph. Giorgibel - Self-portraits in my land

What are Maria Montessori and Bruno Munari doing together? The idea of dedicating a single exhibition - Touching Beauty, until 27 February next year at the Palazzo delle Esposizioni in Rome - to the great educator and artist-designer came from the Omero State Museum in Ancona. Explaining beauty to the blind, but also to those who are bombarded with images and can no longer grasp the right value of things, is the goal of the setting built by Fabio Fornasari around five thematic nuclei: shapes, materials, skin of things, alphabets and tactile narratives, manipulate and interact. 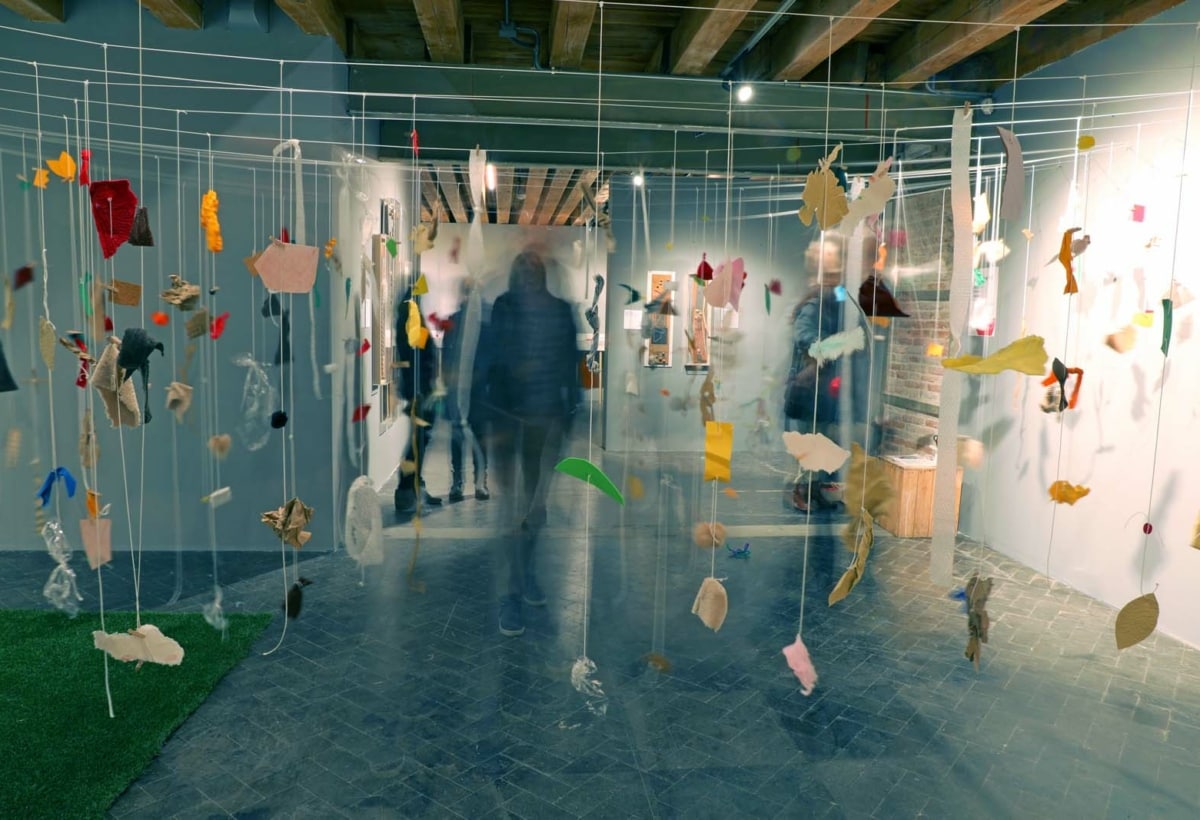 Each section tells the dialogue between Montessori and Munari through objects, books, tools displayed on specially conceived and designed tables, whose shapes are in dialogue with the works on the wall. At the end of the course, the last table-laboratory allows you to safely observe, manipulate and experiment a selection of works and objects that will explore different aspects and connections in the various monthly workshops. 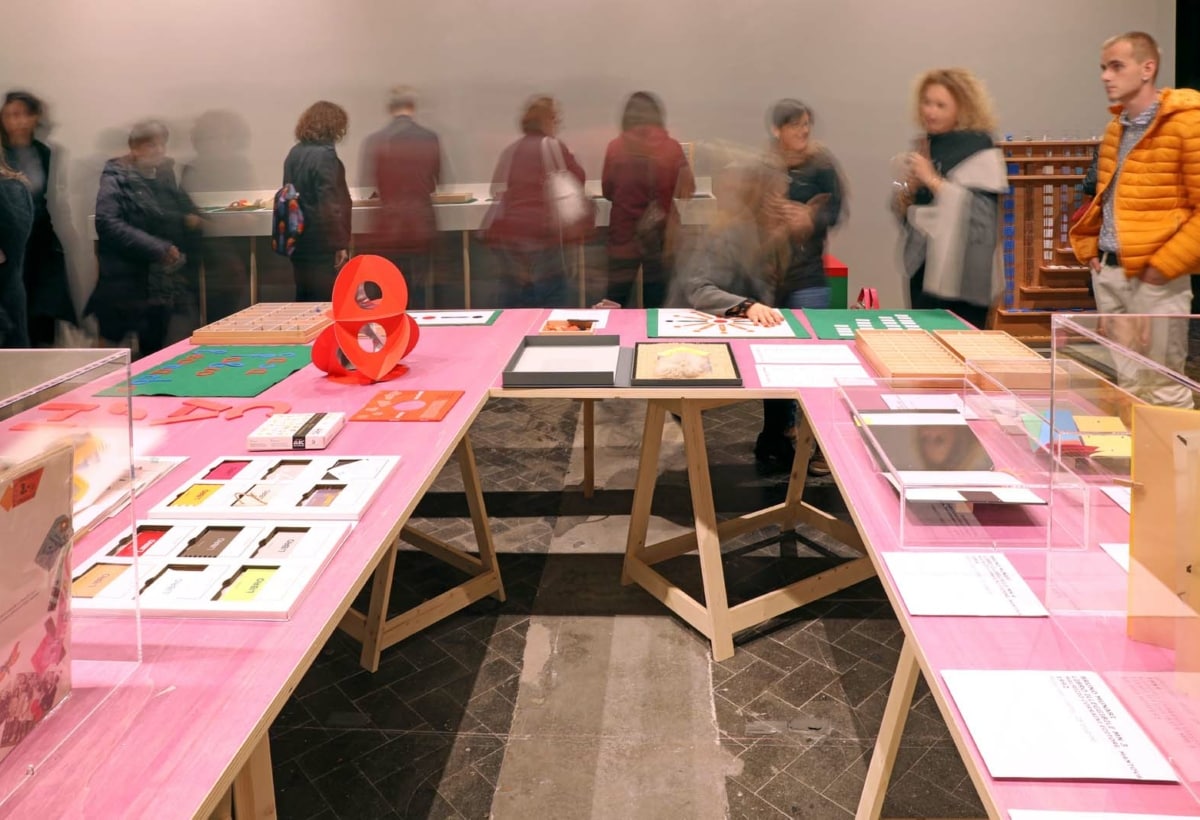 Cover photo and below, some furnishings and accessories from the Bam Design collection including the Tonie sideboard, designed by Andrea and Vittorio Bruno, sons of the founder Tonino, which tells the artisan tradition of Sardinia. The photos are part of a project signed by Gianluca Vassallo. 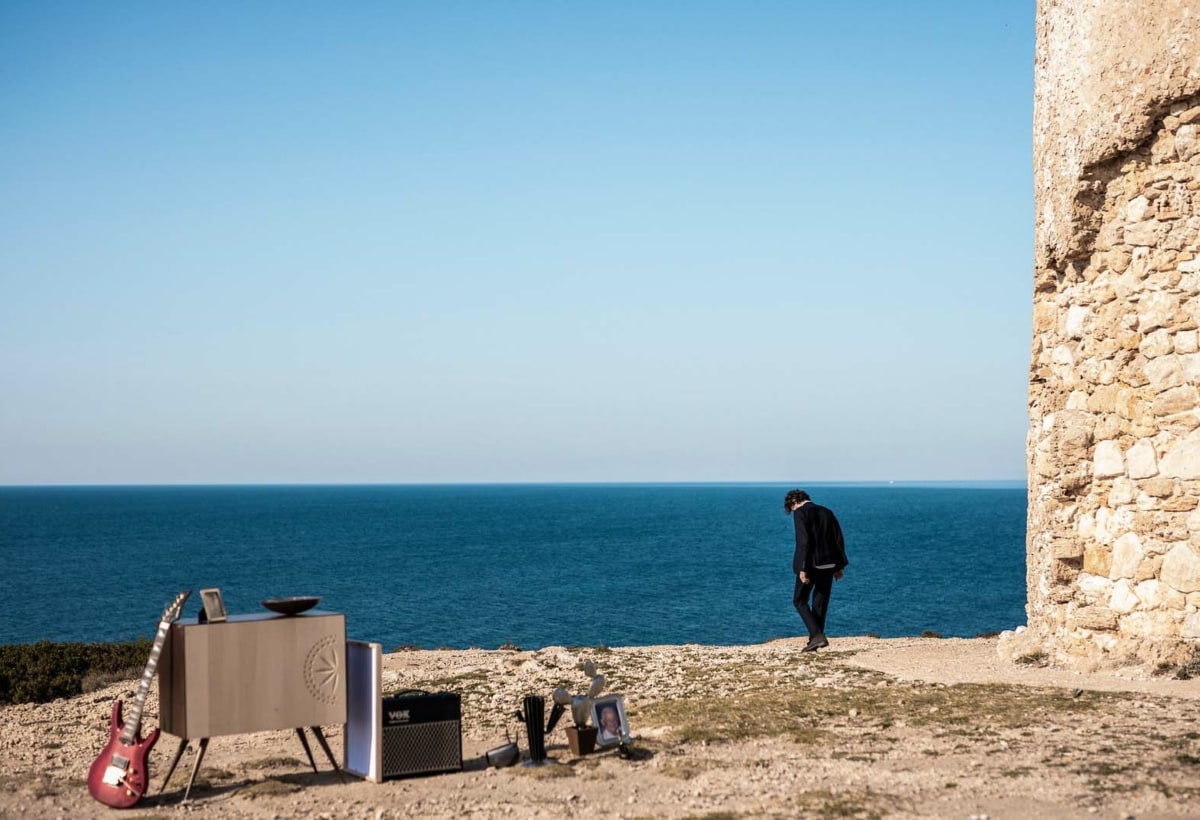 On June 18, 2021, the Nivola Museum in Orani, Sardinia, hosted the preview of Libertà (Freedom), the film by Gianluca Vassallo & Francesco Mannironi, with Michele Sarti and the voice of Giovanni Carroni, for Bam Design. An interrogation of oneself with an eye on the horizon and the blue of the sea, the film tells of the deep-rooted and profound bond that everyone has with their land and native family, but at the same time it tells of man's inherent desire to free past and trace an individual path. A theme of universal research, capable of assuming new and deeper symbolic meanings in the period we are experiencing, which tell the story of Bam Design between the lines.

Trailer_libertà from BAM Design on Vimeo.

Samsung, journey into the house of the future

What does ergonomics mean today?