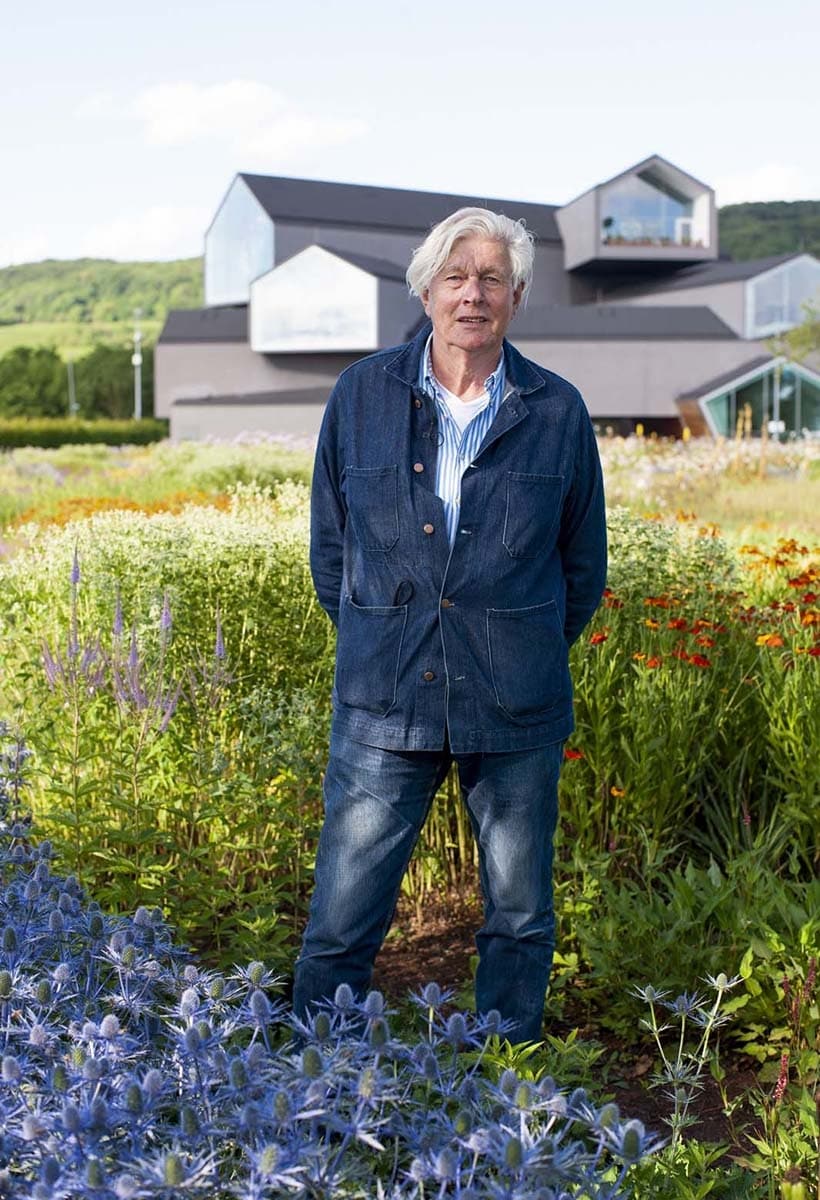 Piet Oudolf: the sense of landscape today
In the garden designed for the Vitra Campus at Weil am Rhein, Piet Oudolf recounts the meaning of creating a landscape today: regaling spaces of happiness and preserving nature

Watching Piet Oudolf designing his gardens has an ancestral feeling about it: the sound of felt-tip pens tracing circles, lines and blocks of color on thick paper; the pauses, the details almost engraved with a rapidograph. The portrait of him at work is by Thomas Piper, who shot Five Seasons. The Gardens of Piet Oudolf, presented in Italy at the Milano Design Film Festival 2017. And one need only watch this extraordinary documentary to realize how intimate, thoughtful and almost spiritual is every gesture that this Dutch giant, 78 years old and with a shock of white hair above his face, lavishes on his plants. When he is drawing, nothing matters except the plants and him. The world’s most famous landscape designer (he designed the gardens of Battery Park and the High Line in New York, the garden of the Serpentine Gallery in London and the Lurie Garden at Millennium Park in Chicago), he is the inventor of an approach to gardening that is now copied practically everywhere. Yet Piet Oudolf does not have a large office, myriads of staff or a smart social media strategy. He started gardening (as a boy, after falling in love with plants while working one summer in a garden center), and ever since he has designed on his farm, looking after the thousands of species that he grows in his nursery with his wife Anja at Hummelo, a small village not far from the German border. “An office, staff, the social media – all this doesn’t interest me,” he said when we met at the Vitra Haus for the presentation of the garden he designed at the request of Rolf Fehlbaum. “I still have a great thirst for freedom, which I only find in creating art on my own. I don’t want to join the big circuits, not even the creative ones. I do a design and then, for the production, I rely on other firms.” 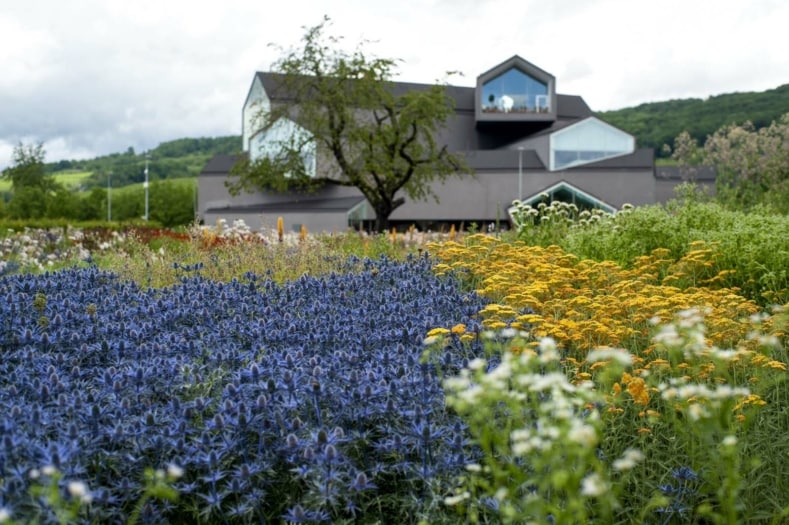 The garden at the Vitra Campus, with the Vitra Haus in the background. In his landscapes, Oudolf seeks to create an immersive experience, mingling species chosen not only for the quality of their summer flowering but above all the shape of the plant, with stem, leaves, seeds.

In fact, Piet Oudolf has always worked freely, ever since he changed the connotations of gardening. Like an architect, he designs by starting from an intimate knowledge of the materials at his disposal (plants) and like an (Impressionist) artist he composes to communicate above all an atmosphere. This may seem normal today. But it was far from normal when Oudolf started, in the 1980s: when the equation garden = flowers and colors was still the most popular idea. Very few understood his landscapes: tidal drifts of yellows and greens indistinctly mingling, patches of color, large stems swaying in the wind. Apparently indomitable spaces but in reality fully designed starting from the structural features of the plants (leaves, stems, seeds, rather than just flowers) and the way they evolve through the seasons (rather than only when flowering). 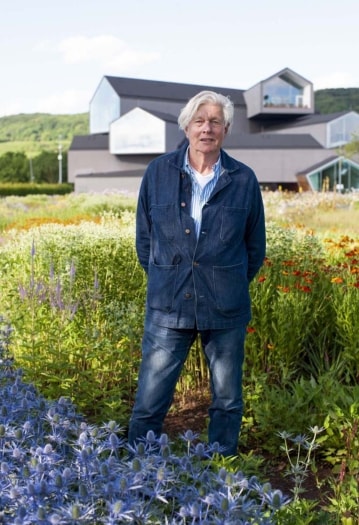 Piet Oudolf’s garden at the Vitra Campus in Weil am Rhein.

This is the essence of his revolution: gardening that is design and not decoration, enabling you to enjoy the beauty of the landscape in all the seasons by using perennials and that, precisely because of these features, is intimately sustainable. “A landscape of mine is what we would like nature to be but isn’t,” says Oudolf as he shows off his garden from the balcony of the Vitra Haus. It looks like a wild meadow, with 30,000 plants mingling with tall and low grasses over the continuous and seemingly random ups and downs of 4000 square meters. “I’ve designed a more untamed area, dominated by grass, where the plants are taller and sturdier. And then one organized like a matrix, around the building,” he explains. When he talks about the species used, Oudolf describes them as if they were people. At Weil am Rhein there is prairie dropseed (Sporobolus heterolepis): “It’s a wind grass, which creates the sensation of being in an endless prairie.” There is the giant Echinacea, a perennial and medicinal plant with “large, beautiful pale flowers”. There is burnet (Sanguisorba menziesii), with its spikes of feathery flowers, meadowsweet (Filipendula rubra) that “creates sprinkles of pink”, globe thistle (Echinops ritro), “with its spherical inflorescences that look like bullets.” The Vitra Campus garden is an immersive experience, closer to the extraordinary architecture that surrounds it than real nature. 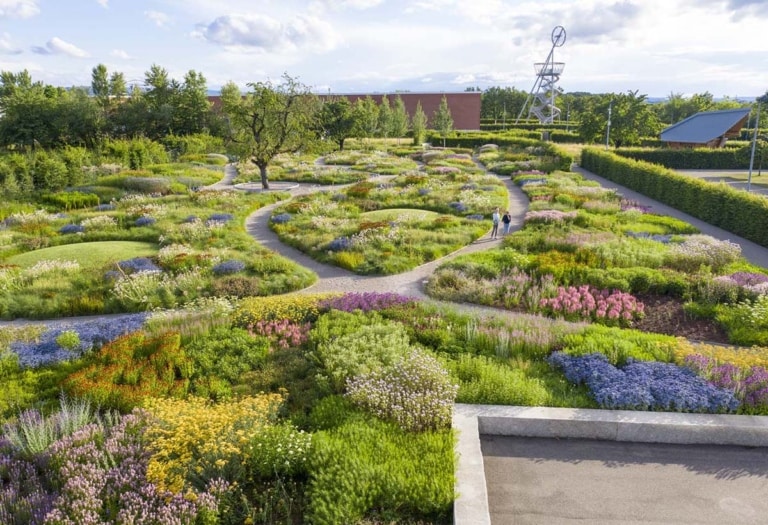 Viewed from the balcony of the Vitra Haus, the Dutch landscape architect’s design can be clearly understood, with the 30,000 plants grouped to form patches of color at different heights.

Weren’t we in the age of authenticity? “Authenticity is a value,” Oudolf agrees, “but a garden is authentic when it is born from a deep knowledge of plants and respect for them. Like a platonic idea of nature that follows its rules but is still a human creation.” In the field Oudolf shows plants unmatched knowledge and respect. “I’ve spent years growing, exchanging and talking about plants, observing them in nature. Before even building our house, Anja and I built a nursery with a thousand different varieties. We followed their growth processes and loved them like children. So today, if I see a plant, I know very well what it will do when the cold comes, what rituals it performs throughout the year, what makes it feel good and what species it loves to surround itself with. Some are aggressive, others placid, still others welcoming. Like people…” So here is the paradox of Piet Oudolf’s gardens, which have made him famous and beloved worldwide. They are among the most studied ever, born from decades of botanical research and experiments. They use species from everywhere, yet whoever observes them will only be enchanted by the sense of spontaneity they express. “Most people don’t grasp the thought that went into my gardens,” he explains. “They sees color mingling, tall grasses, continuous ups and downs and think: it’s a wild meadow. That’s fine because the purpose of a garden is for people to feel good about it, not to say: what a beautiful design. Good design is always what is there but can’t be seen.” 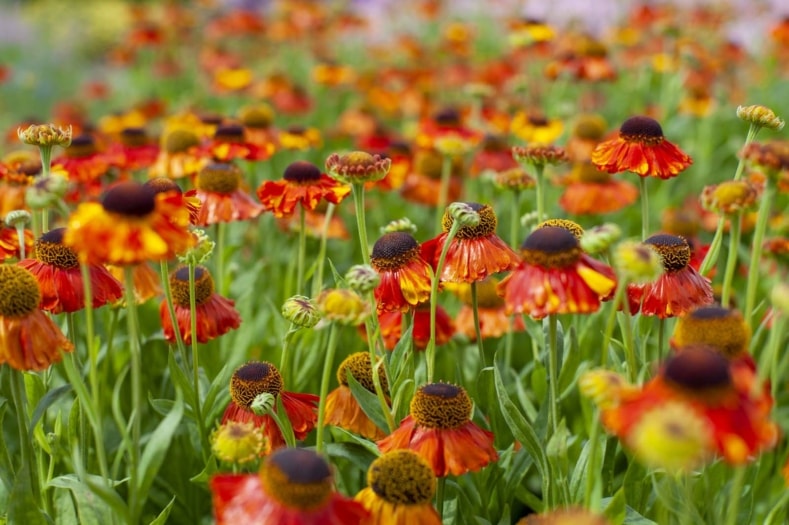 In this way the garden by oudolf is fascinating all year round.

Piet Oudolf’s gardens were born when, an unknown Dutch gardener, he decided to abandon traditional gardening. “It was a dogmatic practice, with strict rules marking the seasons with forced pruning, cutting and positioning of bulbs. A great work with a purely decorative purpose. But there was another world, that of those devoted to protecting wildlife. From this I discovered another side of nature. I’ve known plants that came from the other side of the planet. I discovered that, by surrounding them with grasses, their character suddenly changed, becoming more real, spontaneous, authentic. Although, of course, it wasn’t. I realized that the idea of using only native species is a mistake.” And what about biodiversity? “Monocultures are ruinous, and countless scientific studies now support what I only guessed years ago. This is why today there is more biodiversity in metropolises, thanks to gardens and balconies, than in farmland. Intact nature no longer exists except in a very few areas. Humanity has treated it very badly and the solution now is not to leave it to itself after the destruction, but design it better. It seems paradoxical but nature now needs people to survive.” Not just anyone, but people capable of that respect and passion that animated a twenty-year-old in a remote garden center a long time ago.