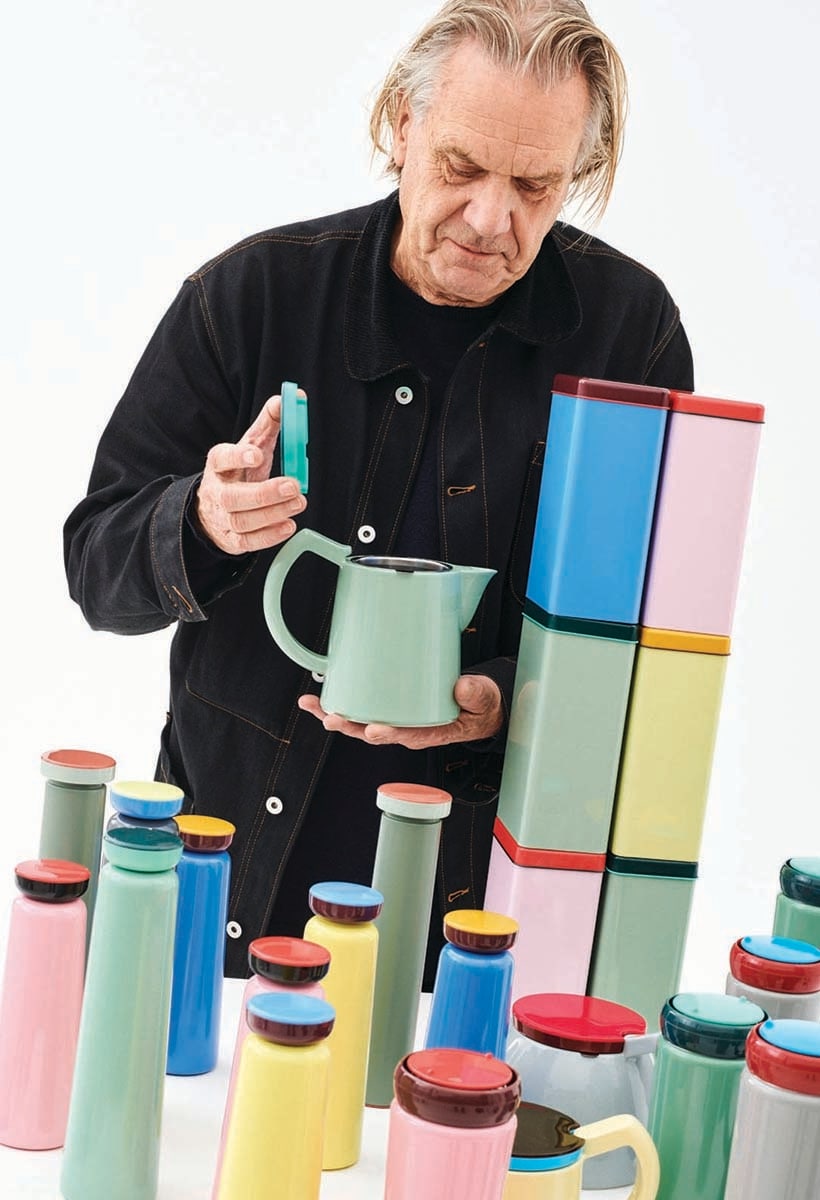 He designed the first computers and won the Compasso d'Oro for a fax machine. Yet for George Sowden, decoration and invention are the heart of the project

Born in england but residing in milan, George Sowden (Leeds, 1942) was one of the founders of Memphis. since then he has designed objects for industry. thanks to Ettore Sottsass, with whom he began working in 1970, he came into contact with Olivetti. in 1979 he opened his own studio, focusing on industrial design consulting, with an emphasis on the logic of production and aesthetics. in 1991 he won the Compasso d’Oro for the OFX420 FAX machine by Olivetti, and in 2010 he created his own brand: Sowden. we met with him to talk about how he combines his personal interest in collaboration with craftsmen and small companies with the practice of drawing and decoration, which began in the 1970s and still continues today. 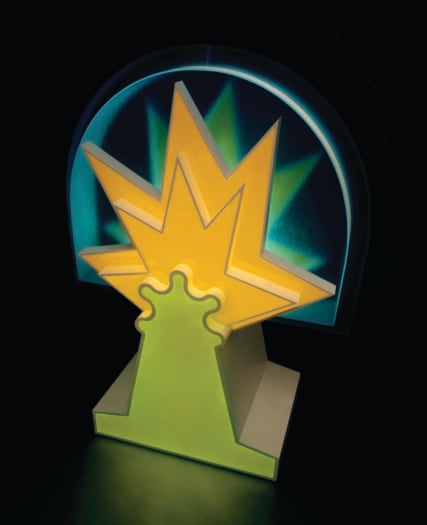 The Star Lamp, 1973, one of the many projects of personal research carried out in the 1970s, which allowed Sowden to become part of the Memphis group as a founding member in 1981.

How did you come to Italy? How was that decision made?

I had seen an issue of Domus with an article on Carnaby Street contributed by Ettore Sottsass, from the series Memorie di panna montata, which I liked very much. So I wrote him a letter and he asked me to come and work in his studio. He brought me into Olivetti, which is where (from 1970 to 1990) I understood how the system of industrial production works, as a designer (with an eye on the final form of products) of the first computers, which did not seem to particularly interest Sottsass. The challenge was to give an identity to a product that had never existed before, and which the marketing men though was like a simple electronic typewriter or calculator… In 1975-78, when no one was paying attention to computers, because they didn’t understand what they were, I designed the first computer terminal with a separate keyboard (the System L1). The same thing happened ten years later, when I came to terms with the theme of the fax machine, which no one else was working on, winning a Compasso d’Oro award in 1991 (Fax OFX420). It was very hard to give a figure, an identity to the computer, dividing the video and keyboard components, also in relation to ergonomic use. Together with my activity for Olivetti, however, I had the freedom to work on other projects. I had a fixation with the concept of decoration, which in the 1970s was a taboo, and this is well documented, regarding all my parallel production. 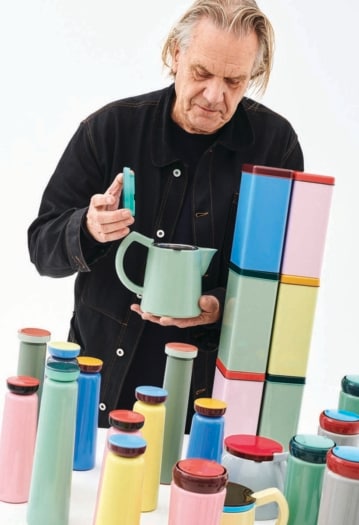 George Sowden with the Coffee coffeemaker for Sowden and other objects designed for Hay.

In 2010 you founded the Sowden brand, with which you have designed many items of tableware, that are to some extent linked to existing types. One of them is the ceramic coffeepot, which I am very fond of at this point because I use it every day, which was actually the invention of a new object. Do you agree?

Yes. In effect, my coffeemaker didn’t exist. The idea of infusion coffee comes from the tradition of tea, but in fact anything that is transformed into a beverage is the result of infusion. Since the start of the last century, coffee has gone through various major transformations. In this sense, in my view, espresso is the result of an invention aimed at shortening the long time required to make coffee with a Neapolitan coffeemaker. In cafés, the coffee had to be produced quickly with a machine, under pressure, that would push the hot water, in a process that was faster than the gravity drip of the Neapolitan coffeepot. In a certain sense, the “moka” is the domestic translation of the espresso you drink at a café. My coffeemaker, on the other hand, is based on infusion, which is different from American filter coffee: the paper filter, in fact, deprives the coffee of its aroma and flavor. First of all, I wanted to design a new coffeemaker that would get away from the previous types, also beyond all the ‘complications’ caused by temperature, quantity, pressure, etc. I began to experiment with metal filters but they were too coarse, the coffee passed through and left unpleasant grounds in the brew. The flavor was excellent, however; it was convincing. The big problem with coffee lies in separating the grounds from the water, which is not an issue for tea. I think the worst thing that ever happened to coffee was the invention, in the 20th century, of pods and aluminium capsules, which are comparable to the use of bags for tea. Tea should be enjoyed after the leaves have opened, releasing their flavor and aroma in the hot water, and coffee should be made without paper and capsules that alter its taste. In any case, in the long run, the best coffee is the one you like the most. 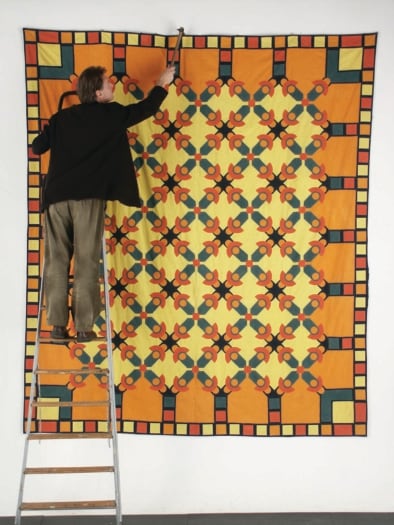 Research for a tapestry, 1976: part of a series of seven pieces made from 1975 to 1977. The idea of making decoration an important component of design has always been a central focus of Sowden’s work.

So how did you reach the concept of the Coffee model by Sowden?

A ceramic pitcher, which is an excellent material to conserve the heat; a micro-perforated steel filter (the holes measure 150 microns, smaller than a grain of the finest possible coffee grind); and a colored plastic cover, which in the latest models has a double layer with an interspace to keep the heat inside the pot.

For your coffeemaker you have engineered the product throughout its production cycle, rather than simply acting as a designer who delegates issues of technology and production to others, as happened inside Olivetti.

After the experience at Olivetti, in the 1990s I began to work for companies connected to the globalized market, which had chosen to sell artifacts produced by other companies, under their trademark. From Alessi to Apple, just to stick to the first letter of the alphabet, big brands sell objects produced by third parties. This is the opposite of what happened inside Olivetti, where every item was entirely made inside the company. Companies design artifacts, but the production happens elsewhere. So I was being asked not just to design the object, but also its engineering, in relation to the costs and possibilities of production. Now if I had to oversee the entire production cycle, at a certain point – being familiar with China and its possibilities – I realized that what I was doing for my clients I could also do for myself, so in 2008 I decided to create the Sowden brand. 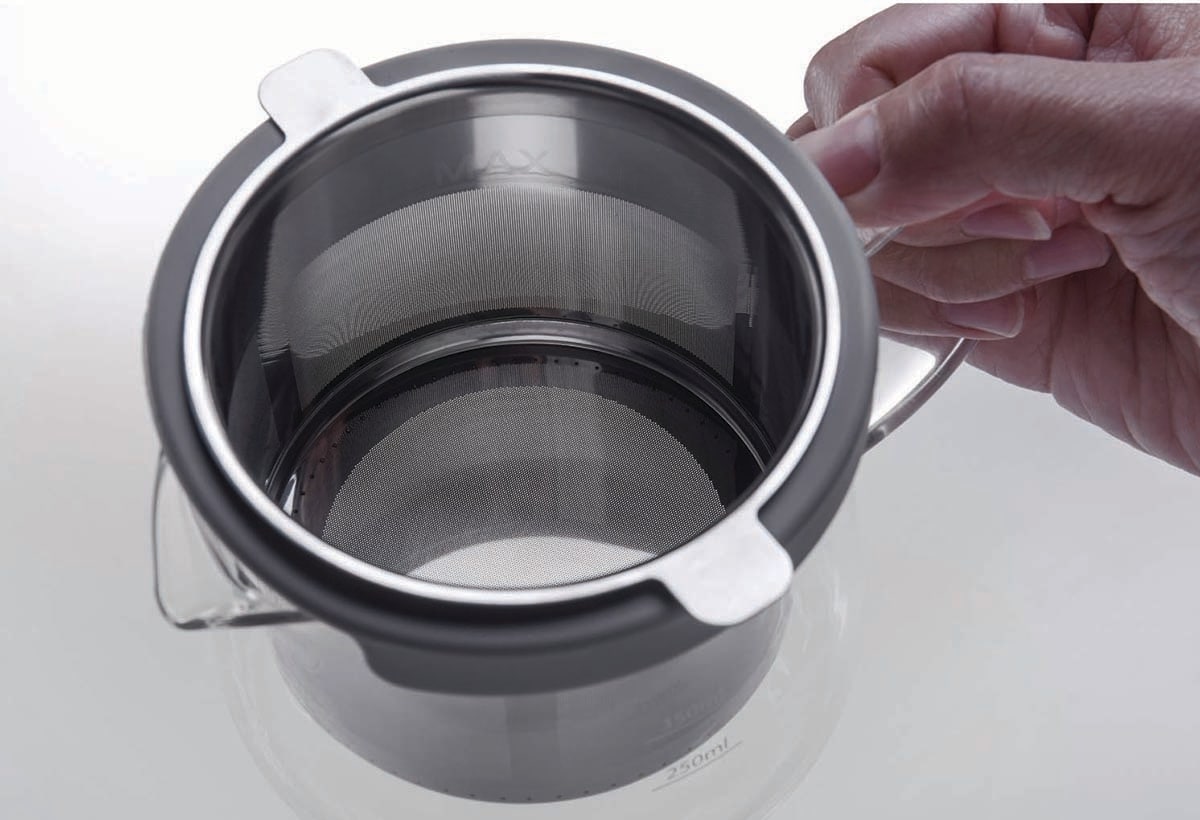 5
Coffee Filter, 2012, a filter that permits infusion of coffee thanks to very small holes, developed by Sowden with a Chinese manufacture

What were the first objects made by Sowden?

I started with the theme of tea and coffee: meaning teapots and coffeepots. The latter are capable of adapting to the tastes of the user, offering control of quantity and the timing of the infusion, and hence the strength of the brew. One fact I did not take into account in this project – but discovered later – was that coffee has a soluble component of 30%, but only the first 20% is the good part to extract and transform into a beverage – the remaining 10% is very bitter and unpleasant, and can ruin the taste and aroma. When espresso is made badly, it can be too dense and bitter (over-extracted) or too watery (under-extracted). An espresso machine extracts the coffee in about 15 seconds, with a margin of about two seconds to obtain optimal extraction. With infusion, on the other hand, after five minutes the good part of the coffee has been obtained (the 20%) and it takes about 30 minutes for the remaining 10%, the bitter part, to be extracted. In this very simple way, my coffeemaker guarantees good brew quality. Though this was not ‘by design’ I think this property of Coffee is very important, beyond the formal aspect of an everyday object that sets out to be attractive and appealing. 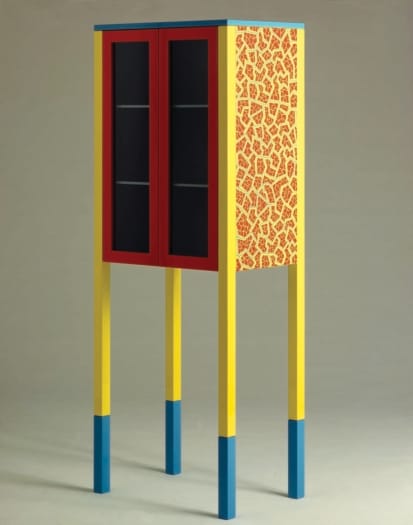 D’Antibes, a cabinet designed for the debut exhibition of the Memphis group in 1981.

For you, today, how important is this semantic value of your projects, their emotional impact?

I was trained in the 1960s at the Gloucestershire College of Art, where they taught modernist design and architecture linking back to the ‘heroic’ period of the Bauhaus. It was a very pragmatic school, where theory and practice were seen as parallel. When I reached Italy and began working with Sottsass in 1970, I experienced a sort of freedom from modernist ideology, and then Memphis destroyed it completely. Not so much due to its ‘multilingual’ style (we were a group, after all), but through the expressive freedom Memphis put at the center of its program. With Memphis I could do what I wanted, and when you can do what you want everything depends on your sensibilities, your ability and creativity. In this sense, what I do today has the same freedom and spontaneity of that time, an attitude that has stayed with me for forty years, though now the technologies have changed. In the end, if what you do has a pertinent value and meaning, it will remain – otherwise it will vanish: society decides.

Slava Balbek: what an architect can do in a war zone

The Milan Cortina 2026 Olympics. A question of Legacy