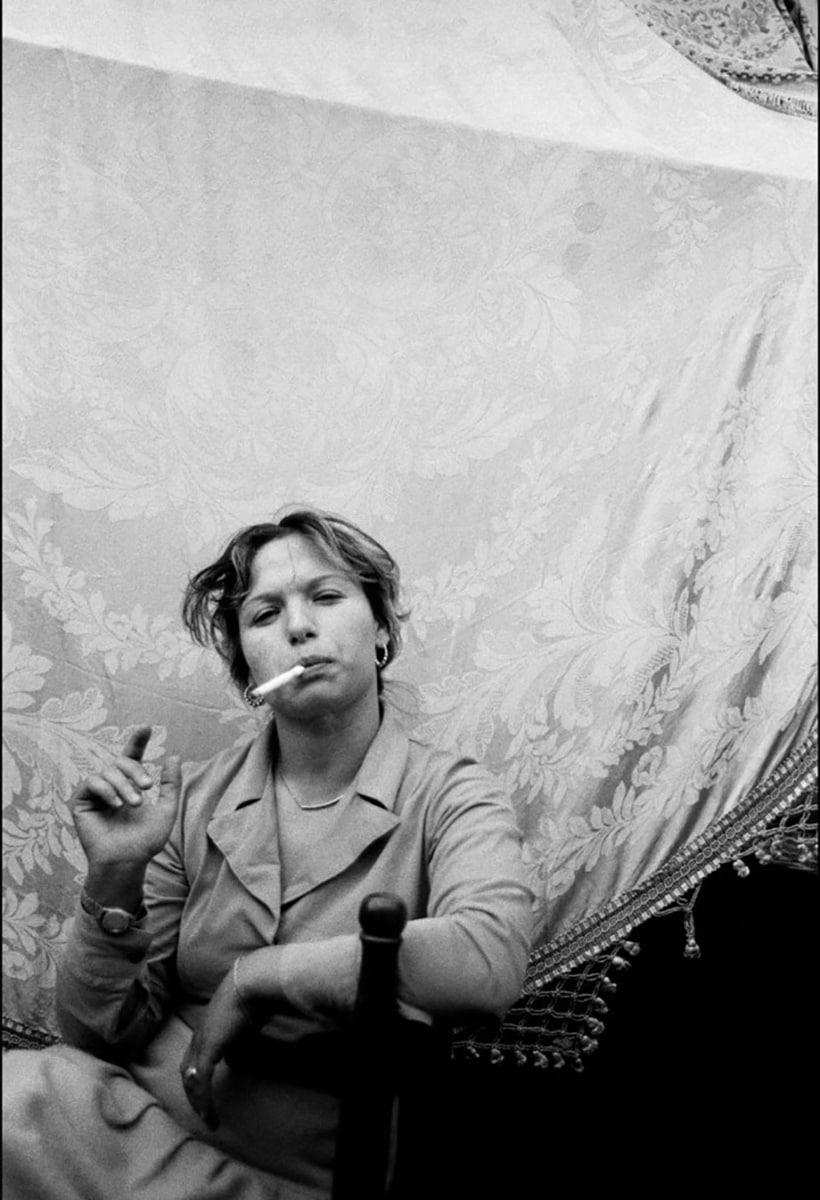 The great photographer, rights activist, is gone. We remember her with this beautiful interview that she gave to Francesca Esposito on the occasion of the site specific project Meraviglioso Reale in L 'Aquila

To remember Letizia Battaglia, who left us a few hours ago, we propose this interview, originally published on February 2, 2022.

"I didn't realize that I was free, that I wanted different things. I always lived for what I felt, not for others. I myself didn't know I was struggling, it seemed normal to me." 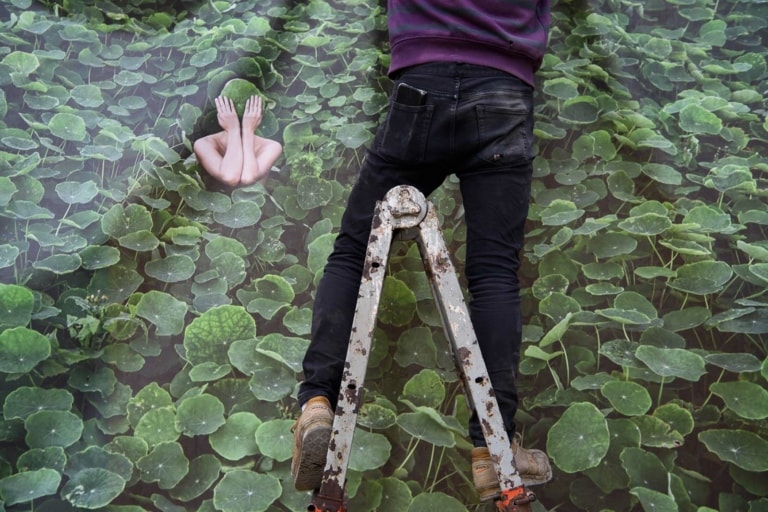 A name, a destiny that of Letizia Battaglia: who "photographs the inner beauty", is convinced that "one must be biased" and "always take a stand".

We met her on the occasion of the site specific project Meraviglioso Reale in L'Aquila: giant photographs of her pictures stand out on the scaffolding of the future Casa delle Donne of the association Women TerreMutate. The initiative is curated by Camilla Carè of Off Site Art who, since 2014, has accompanied the rebuilding of the historic center after the earthquake.

But who is Letizia Battaglia?

Born in 1935, award-winning Palermo photojournalist, in 1985 Letizia Battaglia was the first European woman to receive the Eugene Smith award for her social commitment shots. In 2017 she was listed by the New York Times among the 11 most influential women in the world.

You have exhibited her photographs of her in museums and institutions, from France to Canada, passing through Brazil. The documentary Shooting the Mafia (2019), directed by British director Kim Longinotto, was made about her life. Since 1991 she has directed the women's magazine «Mezzocielo» and since 2017 the International Center of Photography in Palermo, for which she organizes workshops and meetings. Roberto Andò has just finished shooting a TV series dedicated to her life. 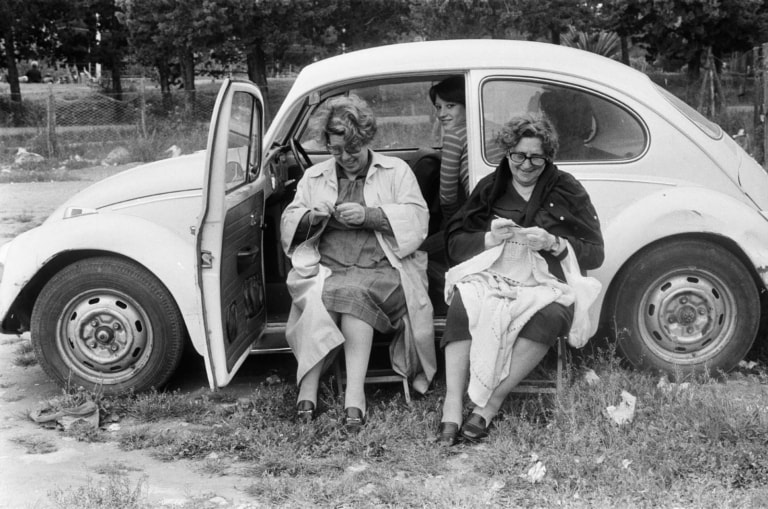 In Meraviglioso Reale we can say that the medium is the message: what do you think of today's women?

They could do much more, for themselves and for humanity. This world needs women to administer, to govern. Not 4 out of 100, but 50 and 50: together they have to manage the world according to their qualities. They must learn to impose themselves in parties, in the workplace. Everywhere women somehow accept. I'm sick of the rhetoric, women have to manage their lives. Ours, everyone's.

The problem is that women don't vote for women. They work less than men, are often forced to leave their jobs when they have children, and have lower wages than male colleagues. We need a change in our attitude , we must demand respect for the work we do. Human solidarity is needed to win this battle.

Are you a feminist?

I am more than a feminist. It is not true that feminists are spiteful towards other women, they are women who form community. We can no longer be satisfied because then the masculine thought goes on, which of course is different from the feminine one. If we worked together things would have more harmony. We are more generous, more courageous, more lovers of the environment and nature.

Historian Alessandro Barbero wondered if women lack the aggressiveness, swagger and self-confidence that help to establish themselves.

Governance is a duty, the duty to be there and to take care of the planet that is falling apart, of pollution, of oppressed peoples. Women wouldn't just be there talking, but they'd do better. 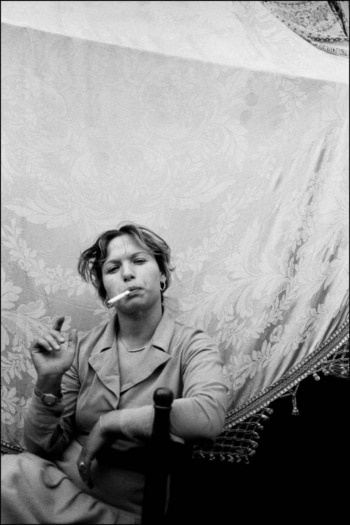 How do we go against patriarchy?

In their private life, women must be decisive, but also in parties. With confidence and certainty, blackmail with men must be done. And we have to get out of it, otherwise there is desperation.

Civil commitment, justice and freedom. Many of its values, most of all beauty. What is it for you?

I've been photographing beauty for years. It is innocence, freshness of behavior. With the camera I look for the pure gaze, in the broadest sense of the word. Where to find purity?

Purity is the girls, the women. I recently photographed some women who have cancer, they came from all over Italy. I tried to find inner beauty. I tried to impose on my camera above all the part it hopes for, the part that wants to fight.

How do you feel?

Wonderful. I know I am like that. The point here is to love yourself. I am almost 87 years old, ill with so many problems. I am elated to have led a life like mine. I'm glad I fought. 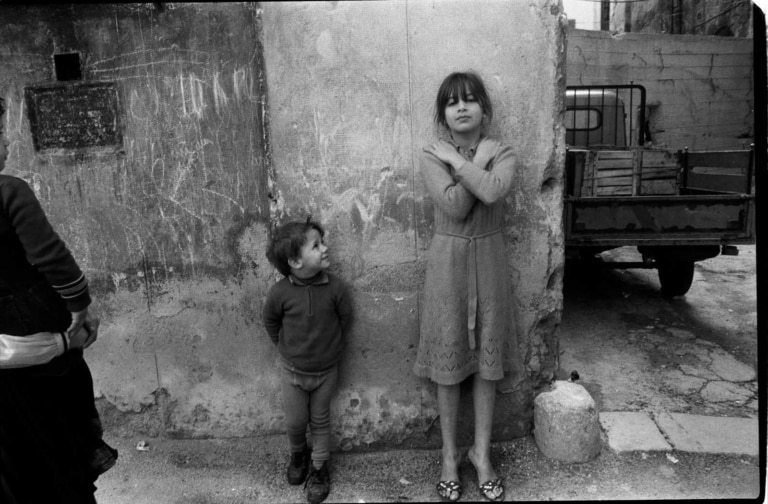 The writer Emanuele Trevi says that we will tend to resemble our name.

I don't like my last name, it's too explicit.

She defines herself as a militant photographer. What does this mean?

Denouncing to the world what the world does not want to see means not having scruples in telling and denouncing. You have to be biased. Take a stand. I'm not someone who takes pictures to sell them to newspapers, to put them in books or to do exhibitions. I've always chosen a side. I have always felt this urgency. 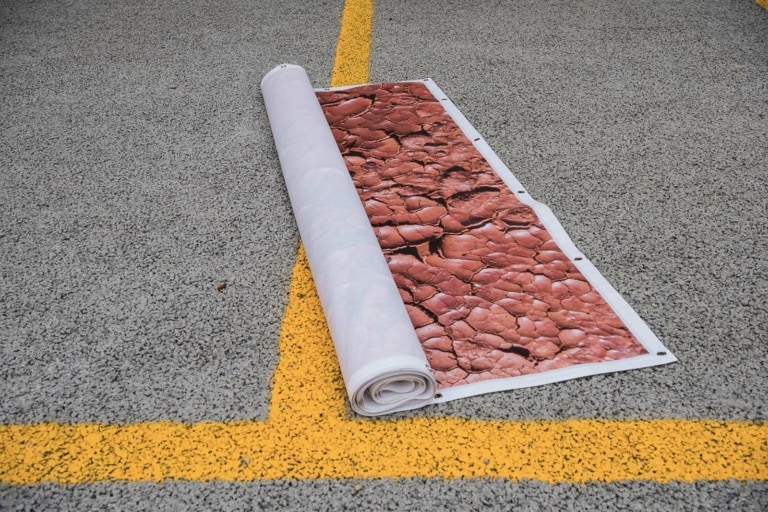 Love for Santi Caleca, a point of reference still today. Then the one for Franco Zecchin. How did it go?

I went to see a Grotowski show, which left Palermo by train to Venice. One of the members of the company, while I was in the audience, came to me and asked me to participate in an internship promoted by the Venice Biennale.

After a few months I left, they called me and there I met Franco Zecchin.

There were French, Japanese. It was forbidden to photograph, but I transgressed and took some shots. They spied and asked me for the rolls. Franco ran out of this villa and bought me some rolls to exchange them with. He had been brave and supportive. A few days later we went out on a boat to Venice, he let some sea water drain on my hand. He was such a kind, shy not cloying. And this was his gesture of attention. That night, instead of sleeping with the others in the sleeping bag, we moved alone to a room that housed a stage set full of dry leaves on the floor. That night we began to get to know each other. 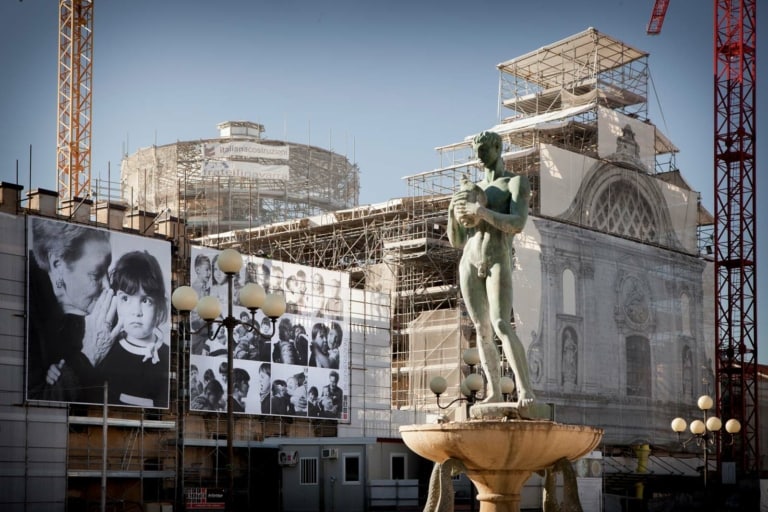 I cannot tell the love of those I photographed. But I can say that it is not falling in love, that it is not true and dangerous. Love is respect and empathy. It is like you a lot, even physically. Taking pictures, for example, is an act of love.

The Milan Cortina 2026 Olympics. A question of Legacy

Slava Balbek: what an architect can do in a war zone