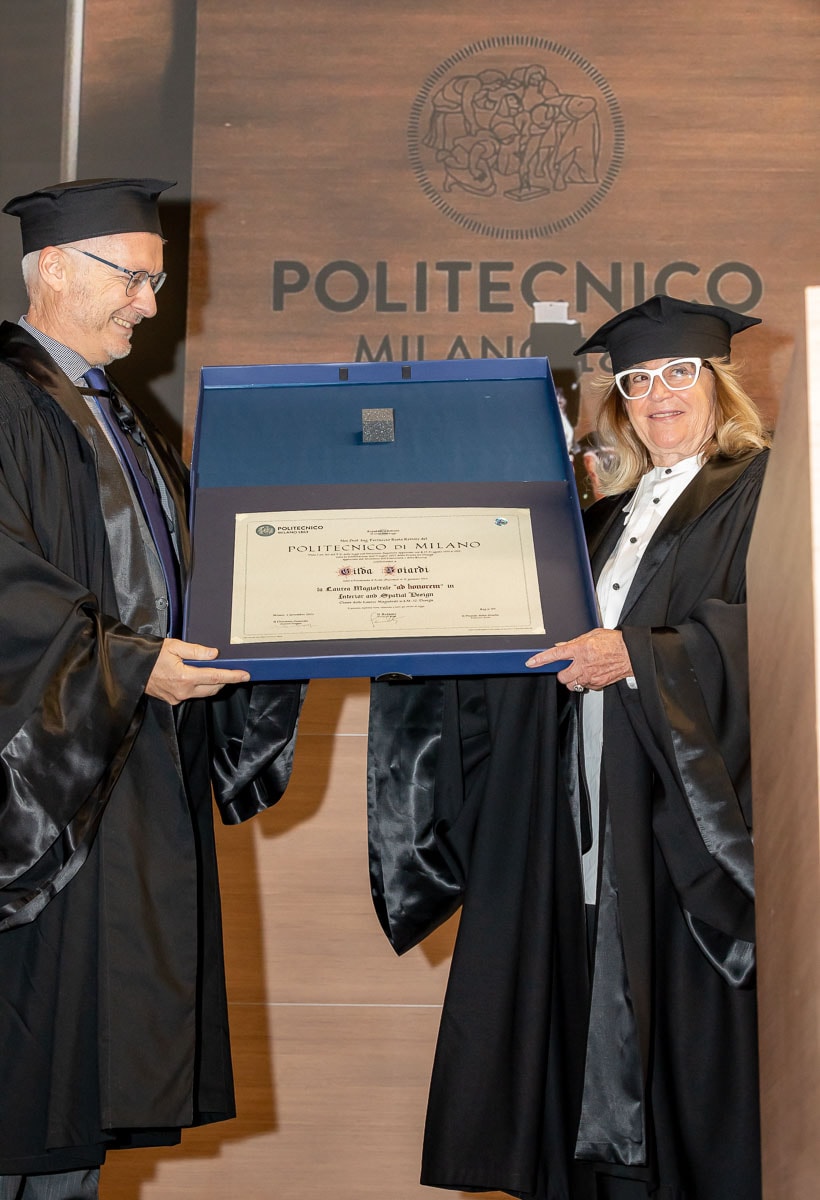 Interni's Editor, Gilda Bojardi, has received last night the Honorary Master's Degree in Interior and Spatial Design from the School of Design of the Milan Polytechnic

"Gilda Bojardi has contributed to give design a central role in the country system and to create a virtuous dialogue between a cultured and experimental dimension in the project and a pragmatism that relates to the most significant roots of production, distribution and the communication of Italian design in all its forms and aspects ", said Professor Francesco Scullica , Coordinator of the Degree Course Council in Interior and Spatial Design, reading the reasons that led to the assignment of the title to the Editor of Interni. 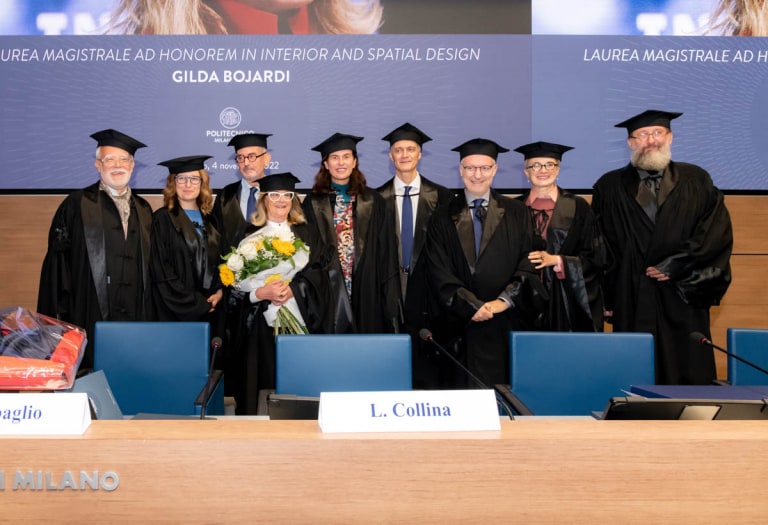 Born in Fiorenzuola d’Arda, in the province of Piacenza, the youngest of five children, Gilda Bojardi arrived in Milan in the 1970s to study Law at the Università degli Studi in Milan. She entered to practice in one of the most prestigious and well-known law firms in the city, she soon realized that the lawyer would not be her profession.

“After graduating, the natural outcome for my career should have been that of a lawyer”, recalled the editor of Interni in her Lectio Magistralis.

“I tried it by entering to practice in the law firm of prof. Mario Casella, one of the most important and well-known studios in Milan. I soon realized that I was not suited for the job. I needed more stimuli. In Milan I was helped by my curiosity, by a youthful unconsciousness and therefore by a certain ability to get involved. One piece of advice I like to give to young people is 'be curious'. I have been and have been rewarded by exceptional encounters ”. 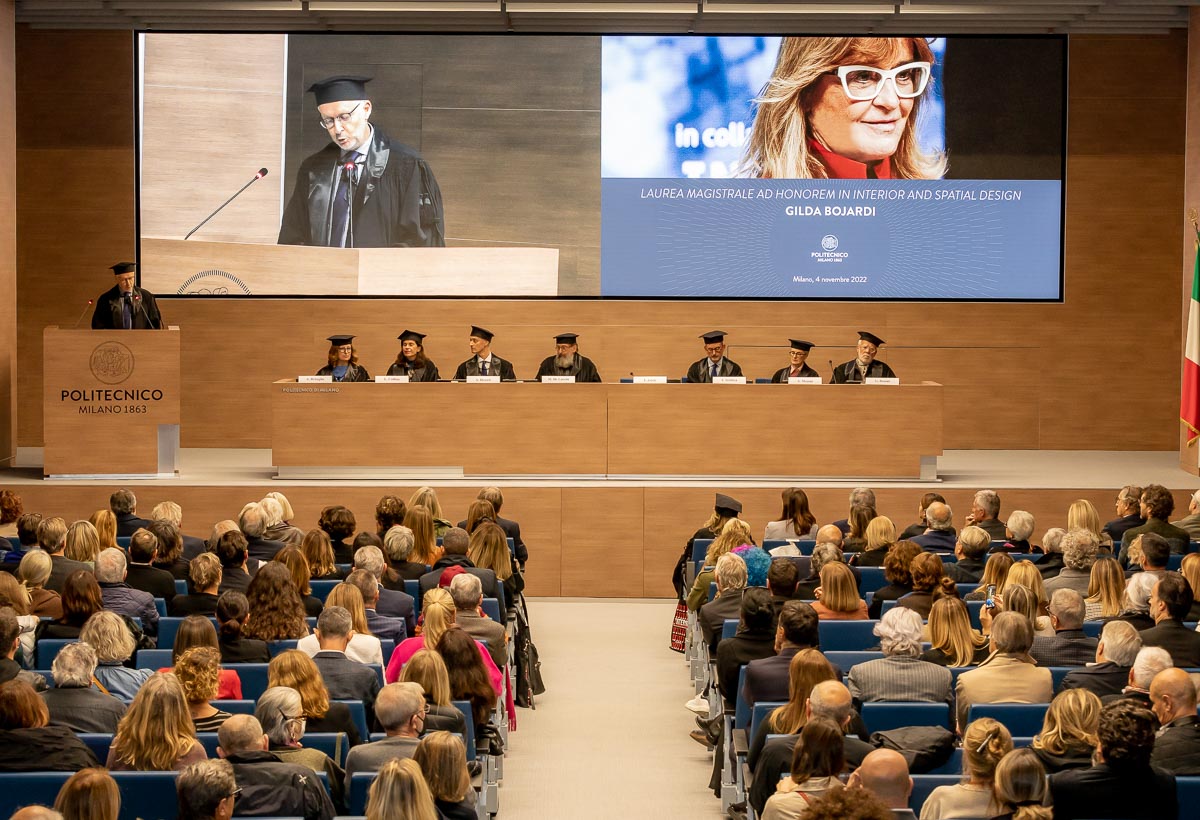 From advocacy to publishing

At the beginning, thanks to some young friends freshly graduated in architecture, Gilda Bojardi met the architect Ippolito Calvi di Bergolo and the artist Paolo Scheggi: together they were exploring the possibility to create the magazine IN Topics and Images of design , an interdisciplinary project in which he wrote about art, architecture, design, theater, and which had among its collaborators figures such as Ugo la Pietra, Andrea Branzi (Archizoom) Adolfo Natalini (Superstudio), Ettore Sottsass, Alessandro Mendini Gillo Dorfles, Franco Quadri, Achille Bonito Oliva .

When Paolo Scheggi asks her to join her group as editorial secretary, she Gilda Bojardi does not hesitate: she leaves the legal profession and begins her career in publishing.

A couple of numbers are enough to turn her into an editor. “I liked meeting architects, visiting their studios: from Ettore Sottsass and Nanda Vigo in Milan, from Adolfo Natalini, Andrea Branzi and Lapo Binazzi in Florence,” she says. 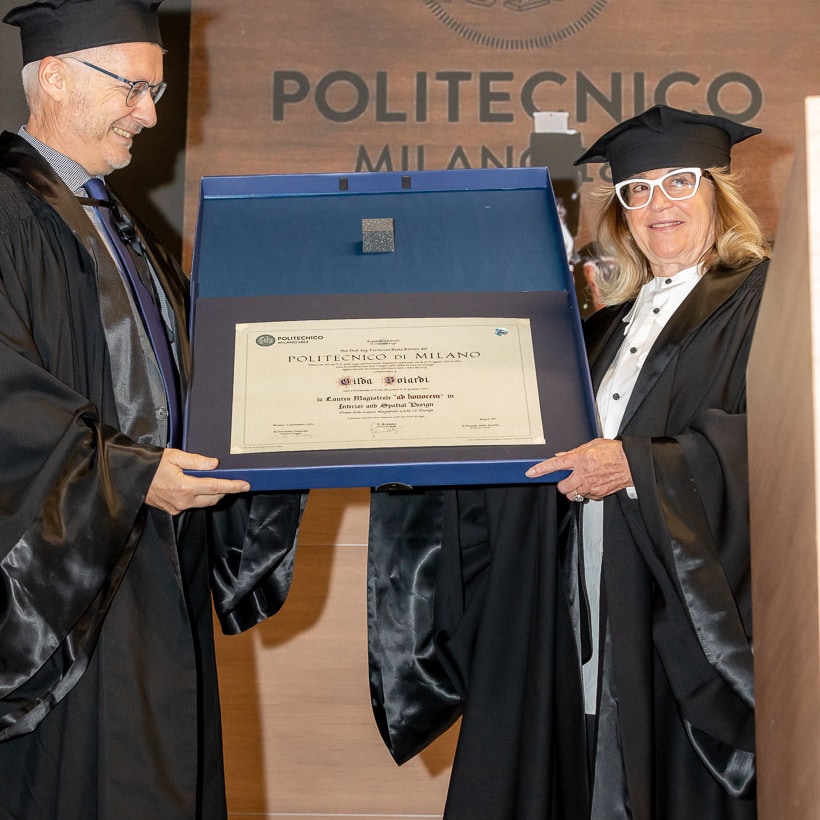 The magazine lasts 9 issues and, after the experience, Ernesto Gismondi suggests the name of Gilda Bojardi to Sergio Mazza , at the time director of Ottagono, with Giuliana Gramigna, who involves her for a special issue. The collaboration was short, but it gives Gilda the opportunity to meet all the architects who collaborated with the companies in Ottagono that supported the magazine. 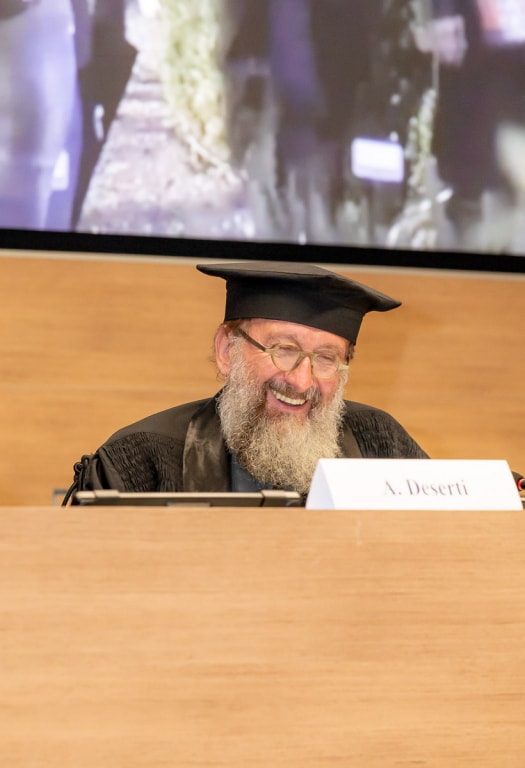 From publishing to career in the company (and back)

The next step is in Artemide , where Gilda Bojardi stays for three years during which she also meets the great photographers, starting with Aldo Ballo and the young photographers students of the studio Ballo e Ballo and work closely with G&R Associati, the talented professionals of the graphic office of Artemide.

But when the same architect friends who had introduced her to the Scheggi and Calvi di Bergolo circuit offer her to join them in Mexico City for a new opportunity, she does not hesitate. And she has a new experience in their company that made furniture for houses and discos in the Mexican capital.

Gilda stays in Mexico City for a year and then lands in Electa. 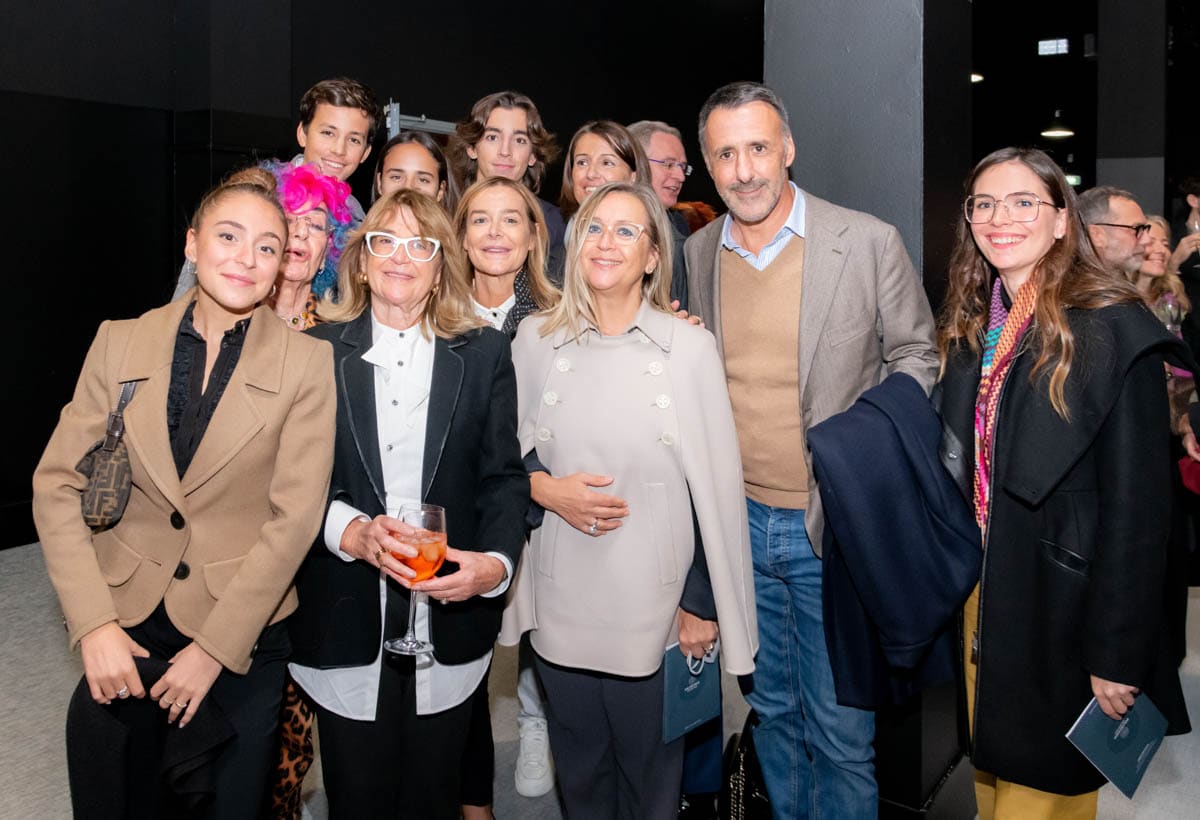 "It was September and there was the Salone del Mobile," he recalled in the Lectio Magistralis. “I walked around and resumed the broken contacts. On that occasion: she called me Dorothea Balluff proposing to promote the magazine Interni (then directed by Bruno Alfieri) bought back by Electa together with Casabella and Ville e Giardini. So it was that I entered the orbit of the then owners of Electa, Filippo Vitta Zelman and Giorgio Fantoni, and to work with Interni as a promoter (to which Casabella and Ville e Giardini) to become commercial director and Editor in 1994 ”. 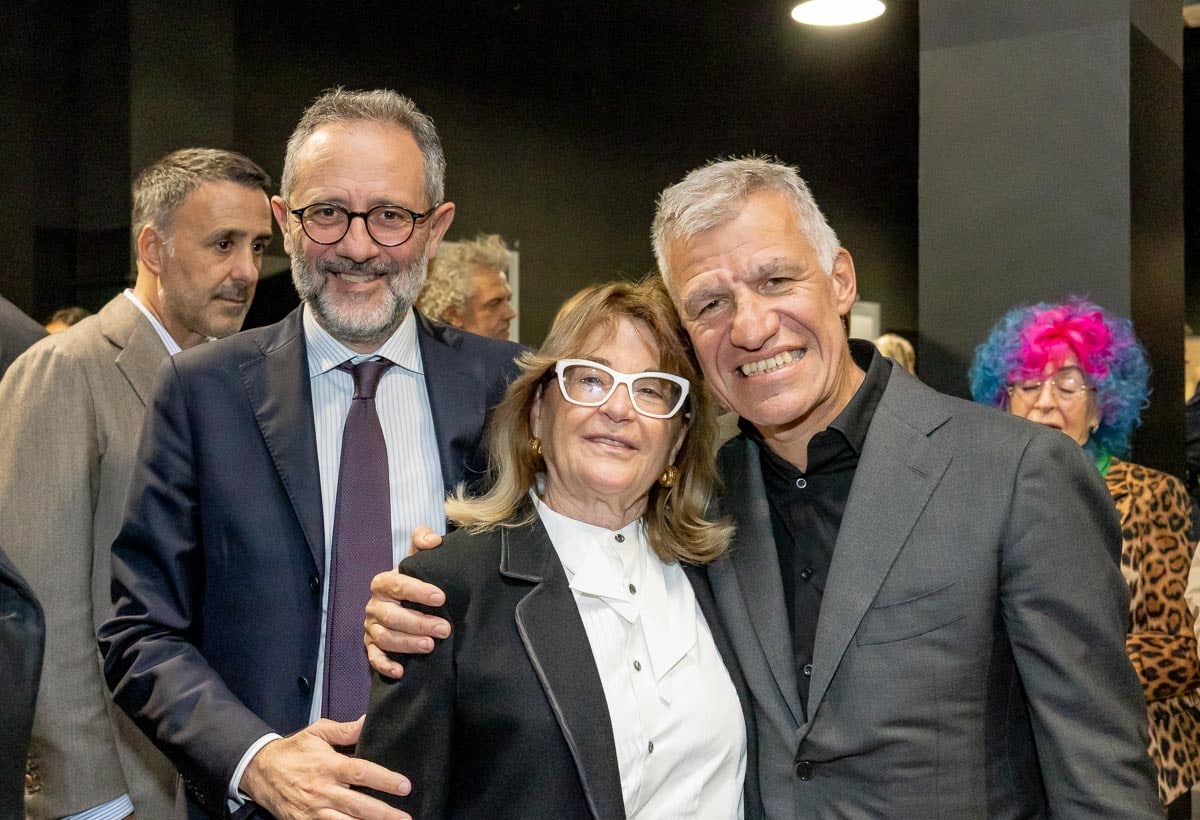 The invention of the FuoriSalone

In 1990, Gilda Bojardi invents what is now known as the FuoriSalone: a model based on a successful mix of performances, installations, exhibitions and experimental expressions , which over the years it has become an integral part of a recognized educational and design training process.

A phenomenon that Interni exported all over the world and that the magazine celebrated last year, on the occasion of the 30th anniversary of the first event, with a volume published by Electa ( XXX-Y 30 years of FuoriSalone / 1990- 2020 Milano Design Storie s- read the editorial here ).

"In 1990", explained Gilda Bojardi, "I decided to fill the void left by the September edition of the Salone del Mobile, moved to April of the following year to replace the Milan Fair by coordinating the organization of presentations and communication of over 100 representative places of design between galleries, showrooms and furniture shops .

"On this occasion, the first Interni Milano Designer’s Week and the Guide were born, which still today represents an irreplaceable tool for orientation for the FuoriSalone public". 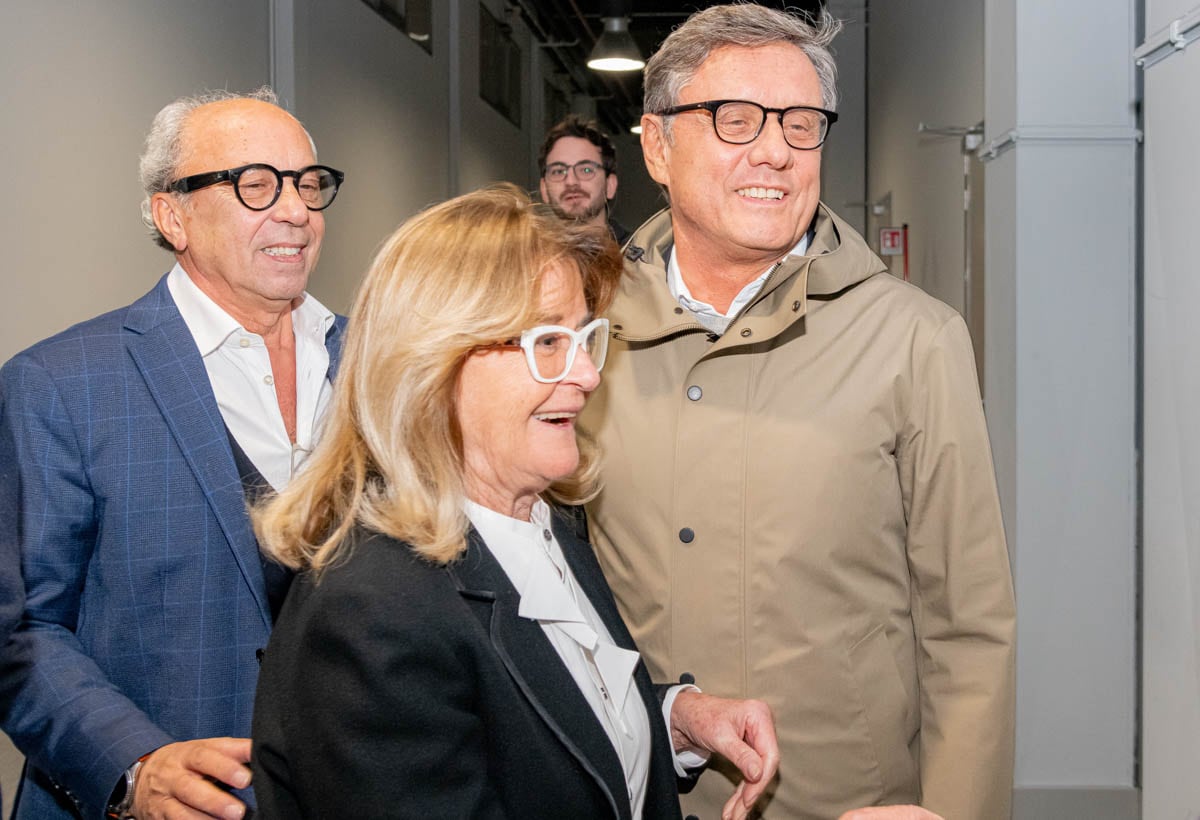 In 1994, Gilda Bojardi became Editor of Interni , the first Italian interior design magazine, founded in 1954: under her direction, the magazine evolved into a system of publications and becomes one of the major international design and architecture communication networks , also supported by a multimedia platform that uses the website (www.internimagazine.it) and social networks (Twitter, Facebook, Instagram). 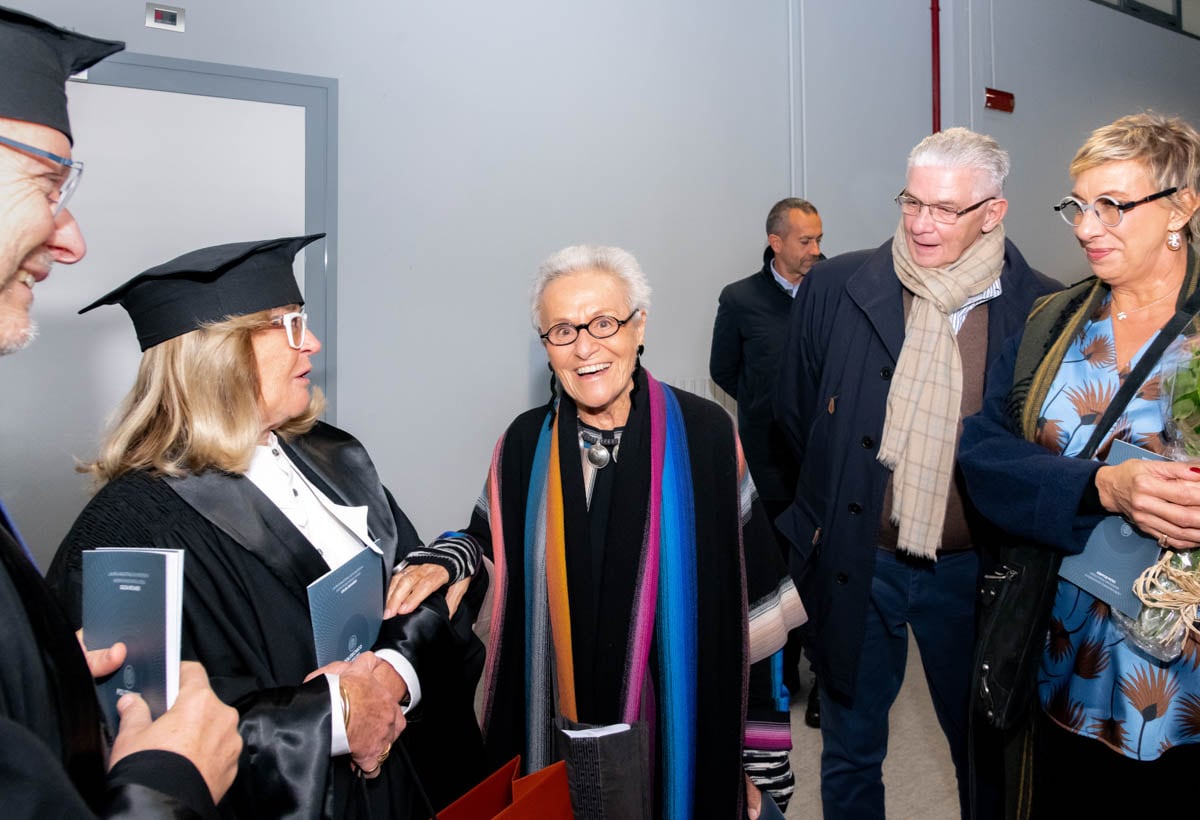 The Honorary Master's Degree from the School of Design of the Politecnico di Milano is added to other awards that the director of Interni has received, including: that of Officier des Arts et des Lettres awarded by the Ministère de la Culture de France (2005), the Ambrogino d'Oro by the Municipality of Milan in 2007 (for the design of the FuoriSalone), the XXVI Compasso d'Oro for Career in 2020. 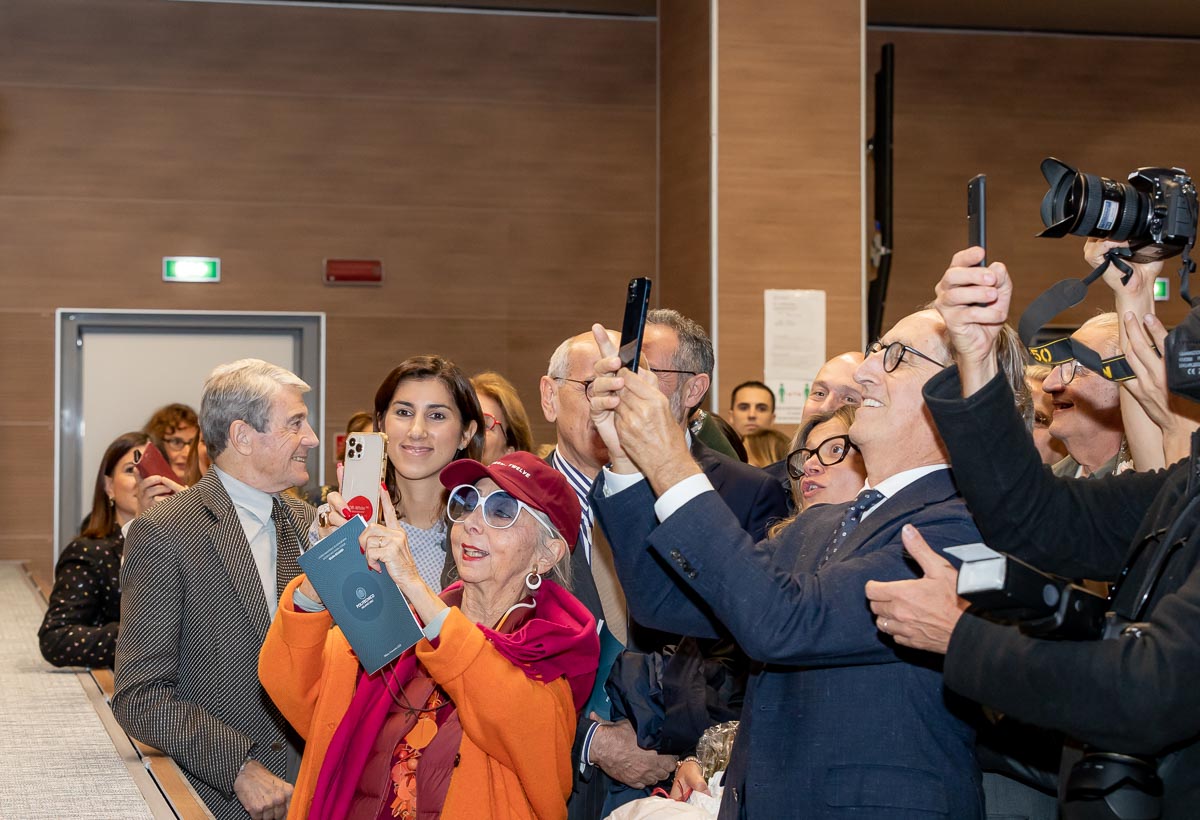 In his Laudatio delivered yesterday evening on the occasion of the awarding of the honorary degree, Michele De Lucchi said:

“Gilda continually invents publications, events, exhibitions, activities . She designs bridges between politics, manufacturing companies and imaginative designers. She builds relationships with other countries, bringing foreign designers to Italy and Italians to the world. She connects different people and cultures. She pushes us to design new things, outside the logic of the market.

"The producer instinct is her dáimōn. The result is an explosive mix that continues to generate the effects of her.

“I can well say: Gilda is a designer! This is the real reason why you deserve the Honoris Causa Degree in Interior and Spatial Design. Because the designer is a professional who sees far, who has in mind an idea of ​​the future, who thinks with a series of technicalities , but also of emotionality and of sensitivity that allow him or her to achieve both product and service objectives, as well as behavior and mentality.

"Gilda's goal is to create fertility. To solicit minds, give creatives and companies the initial impetus for things to happen ". 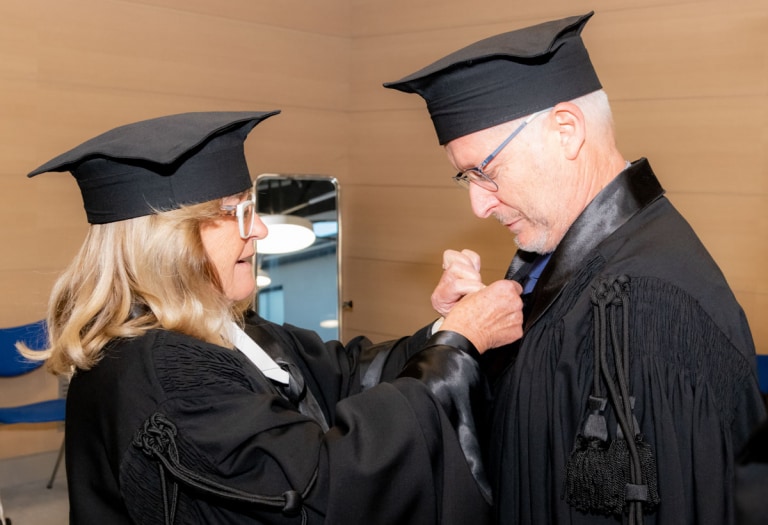 The tracksuit: a design (endless) invention

A book tells the value of the regeneration of school spaces