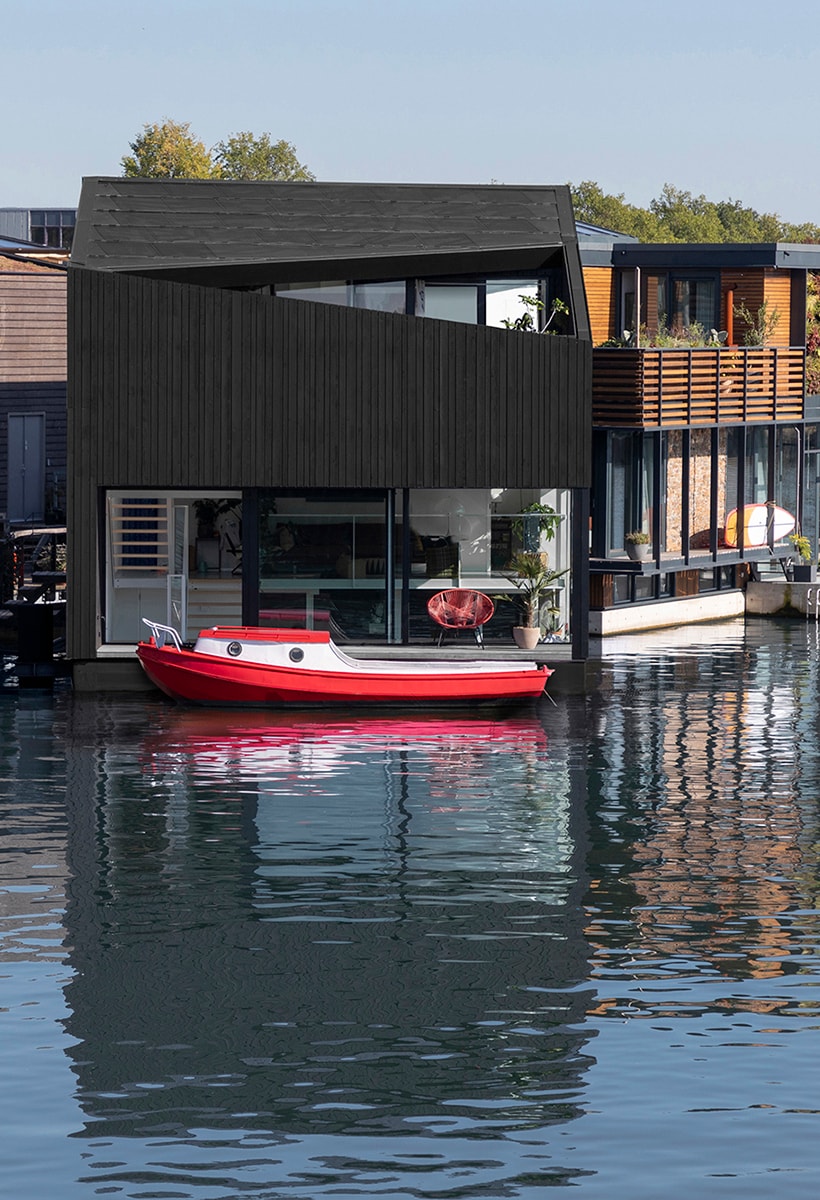 Living on the water

Living on the water

In Northern Europe, but not only, the tendency to live in floating neighborhoods is spreading. Here are the most recent and interesting ones

In 1995 Kevin Costner described in his film Waterworld , a world totally covered by water where people lived on floating atolls. A photograph of our future? Well, I would say not really, at least not any time soon. But it is expected that by 2050, 90% of the world's largest cities will be exposed to rising seas (UN-Habitat). The warming of the atmosphere, the melting of the ice at the poles, the erosion of the coasts, the increasingly frequent floods therefore push, in some areas of the world, to look towards these solutions. 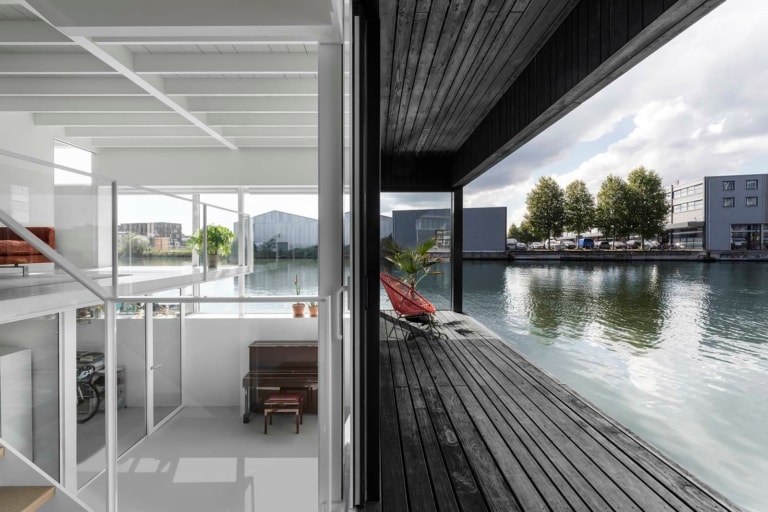 An interesting example is found in Holland in Ijburg, on the outskirts of Amsterdam, where it has recently existed a floating district, designed by the studio Marlies Rohmer Architecture & aUrbanism composed of 165 houses, including villas and buildings structured on three levels, and which can be reached via the Enneüs Heermabrug bridge, designed by Nicholas Grimshaw &  Partners. A complex built in the name of sustainability: the district will soon become a energy district with photovoltaic production and an investment in clean transport is also planned, by 2025, with massive use of electric cars and means of transport. 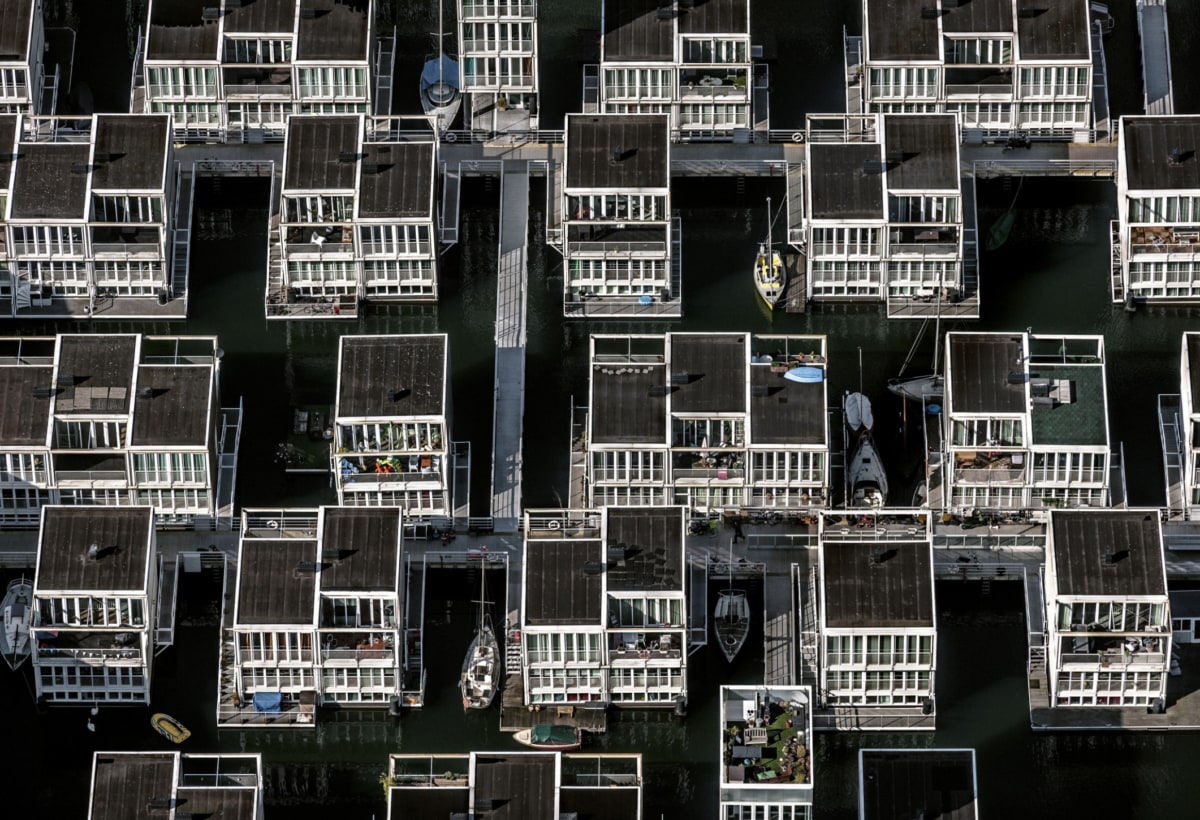 Still in the Netherlands, in Amsterdam, the i29 studio designed the Floating Home : a three-storey house with high energy efficiency and environmentally friendly. Equipped with a pitched roof, with the roof covering rotated diagonally in the floor plan, it optimizes the usable space inside and allows unexpected views on the outside. 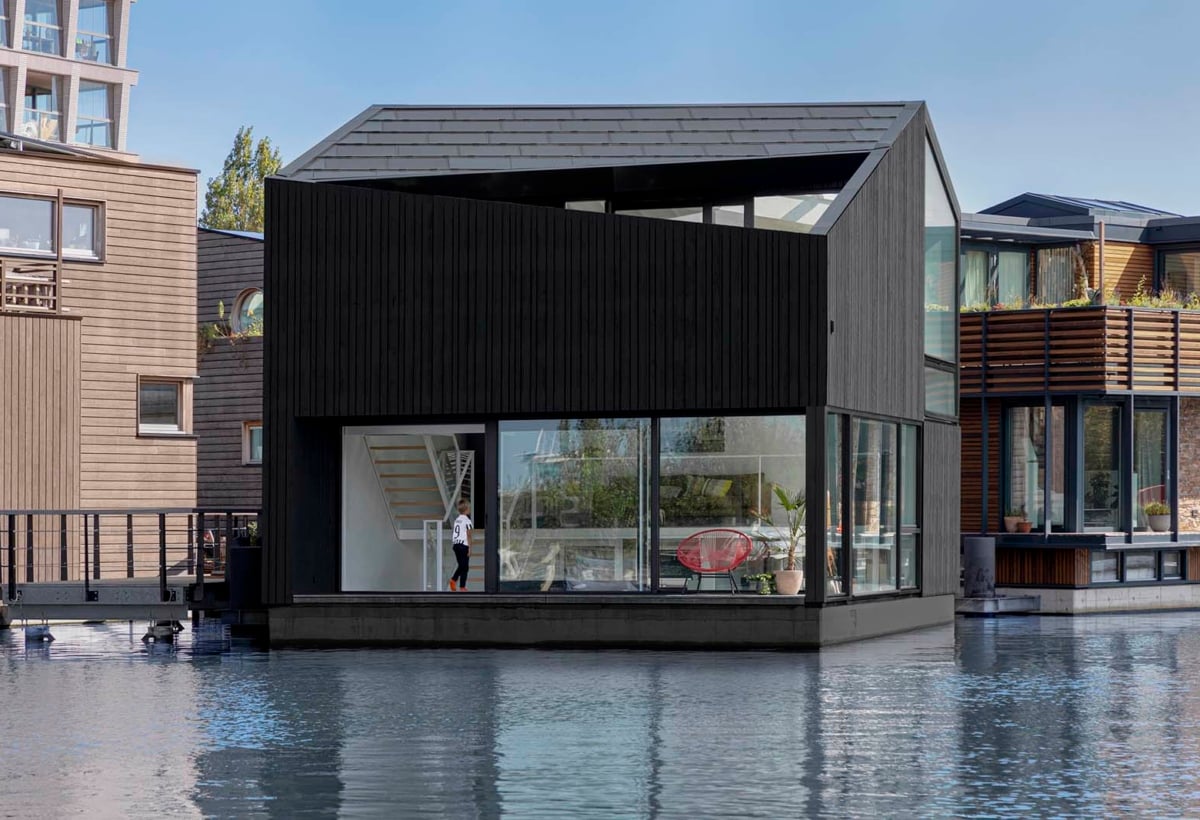 This house has become part of the Schoonschip village, which contains 46 families and aims to become the largest floating community sustainable development of Europe: it exploits the ' environmental energy and water for use and reuse, uses the energy of bicycles to minimize waste, as well as creating space for natural biodiversity. In short, a real hymn to eco-sustainability. 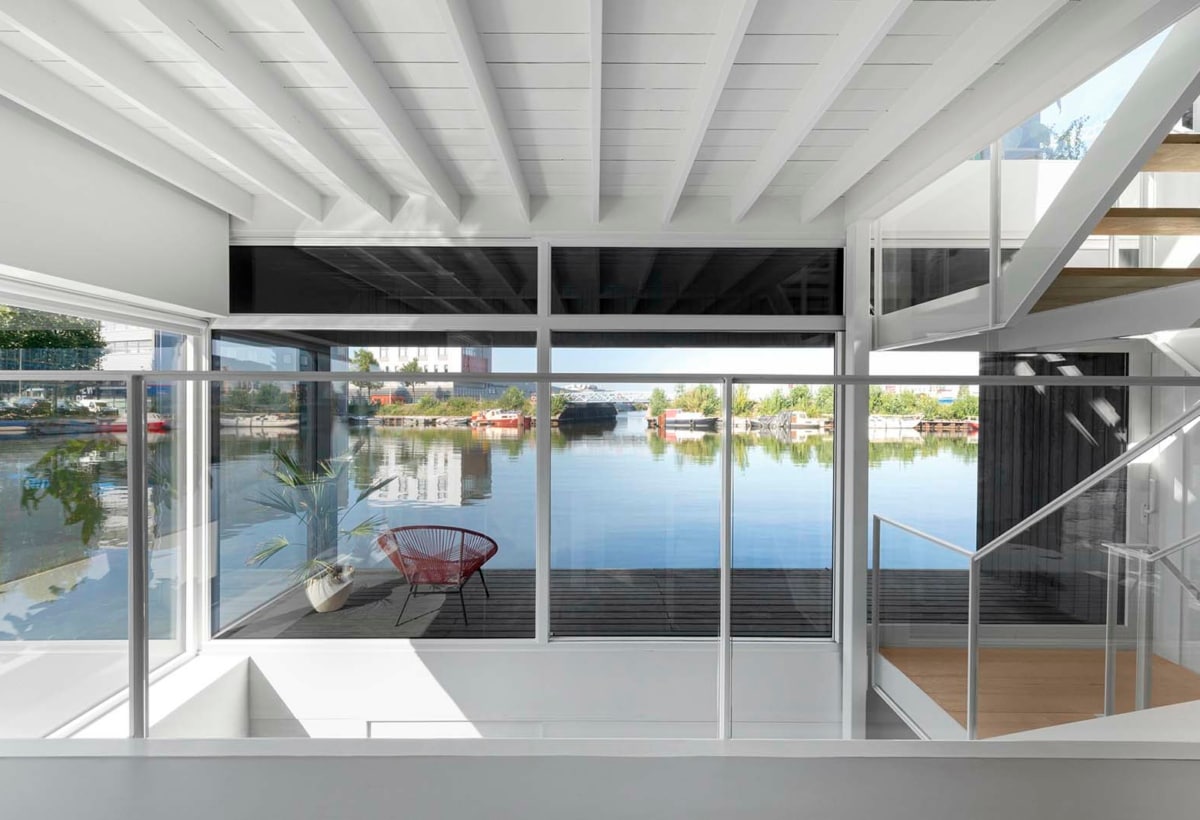 Another example, born as a response to climate change, is Current for Currents created by Studio Dada, based in Manila, which wanted to find a solution to rising tides and storms that hit the coasts of the Philippines every year. 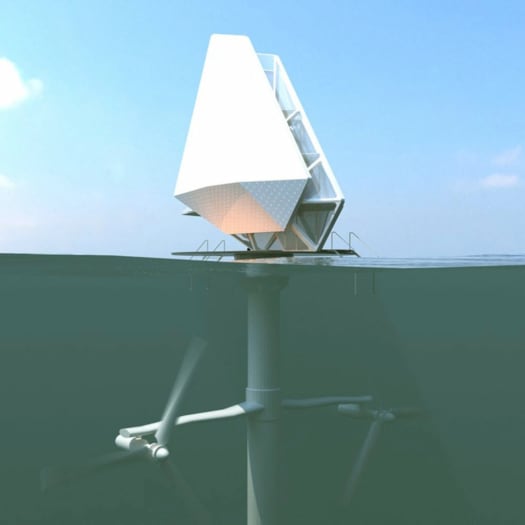 Current for Currents is an unusual house which, as the claim of the project "blue is the new green" states, lays its foundations and is powered by the sea: each single house is anchored to the backdrop through a main structure in molded plastic, easily replicable in any part of the world. In the structure they are equipped with a technological system that allows to produce energy from both the tides and the sun: these houses in practice not only fit into the natural context without damaging it but survive thanks to it. 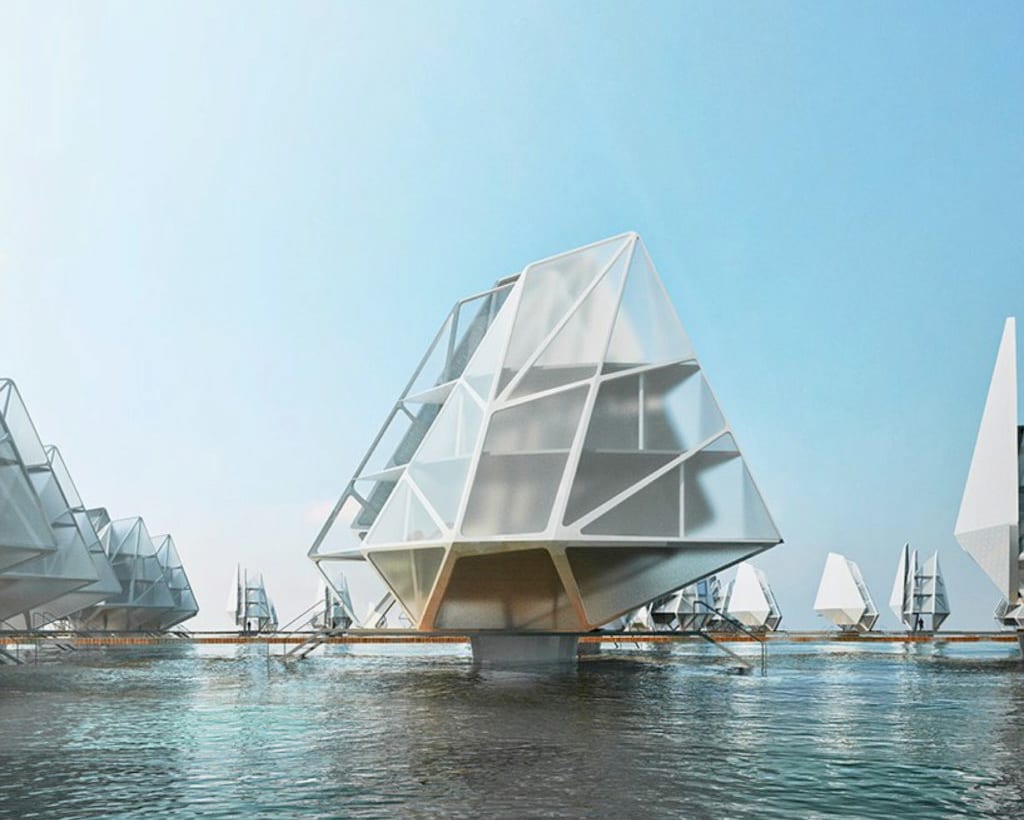 Finally, one of the most recent and interesting projects is the one developed by the blue tech company Oceanix in collaboration with BIG - Bjarke Ingels Group: together they propose the first resilient and sustainable floating community in the world designed for 10,000 residents . Born within the UN-Habitat New Urban Agenda, Oceanix City is in fact anchored to the United Nations Sustainable Development Goals and aims to create a modular maritime metropolis. Oceanix City grows, transforms and adapts organically over time , with the possibility of evolving from neighborhoods to cities. 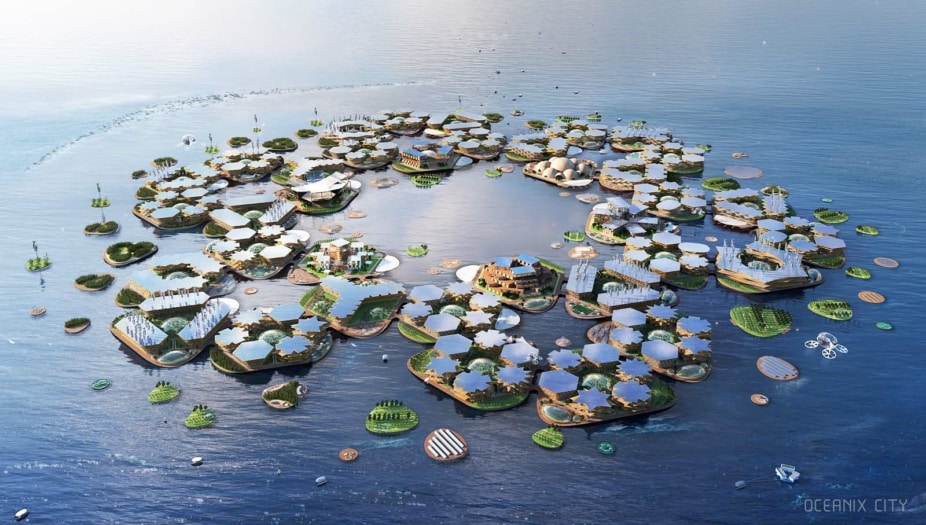 Each modular neighborhood, of 2 hectares, will have a hexagonal shape and will create a self-sufficient community capable of accommodate up to 300 residents, with mixed-use spaces for living, working and having fun. All the structures built in the neighborhood are kept under 7 floors to create a low center of gravity and withstand the elements. Each building opens like a fan to self-shade the interior spaces and the public sphere, providing comfort and lower cooling costs, with the roof area maximized to capture solar energy. 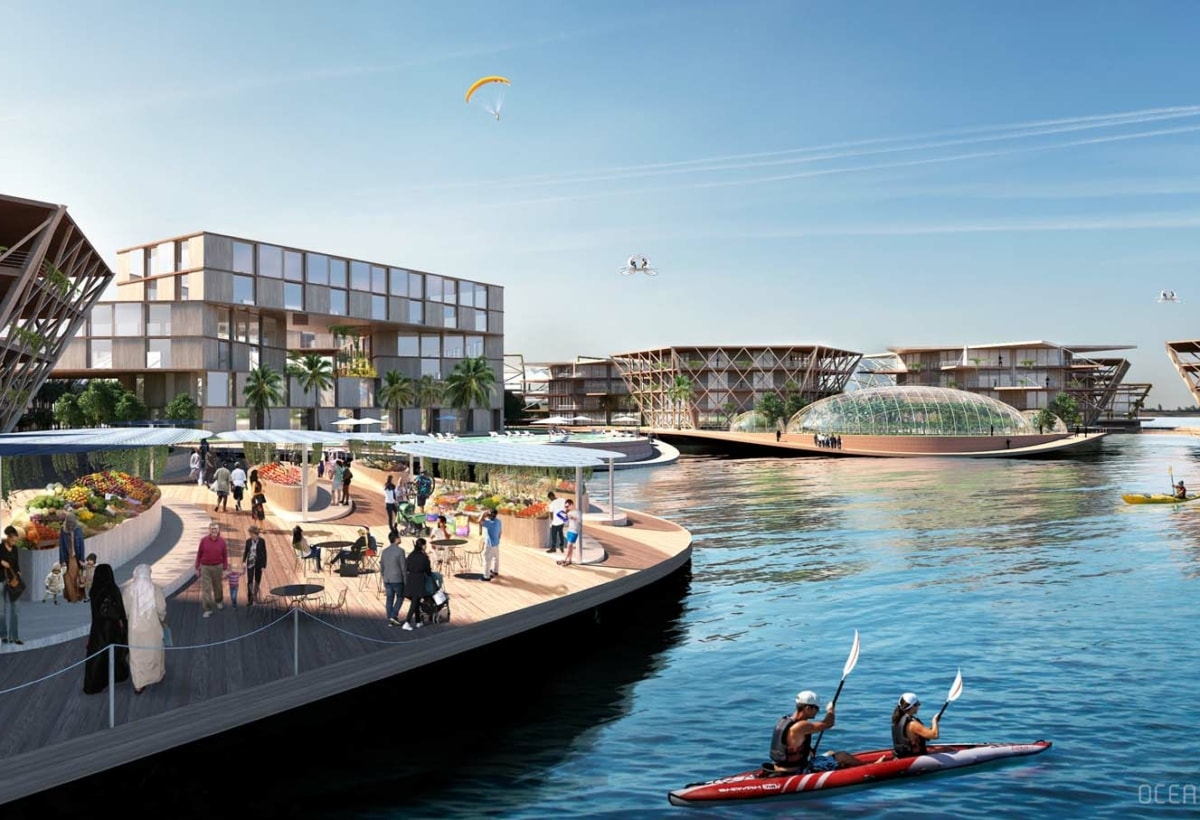 A community garden will become the main source of livelihood and residents will also be able to eat seaweed, oysters, mussels, scallops and clams grown on bio-rocks located under the platforms which, at the same time, clean the water and accelerate the regeneration of the ecosystem. An ingenious and eco-sustainable system that will rise off Busan, South Korea and will ready in 2025. To underline that the future is not that far away. 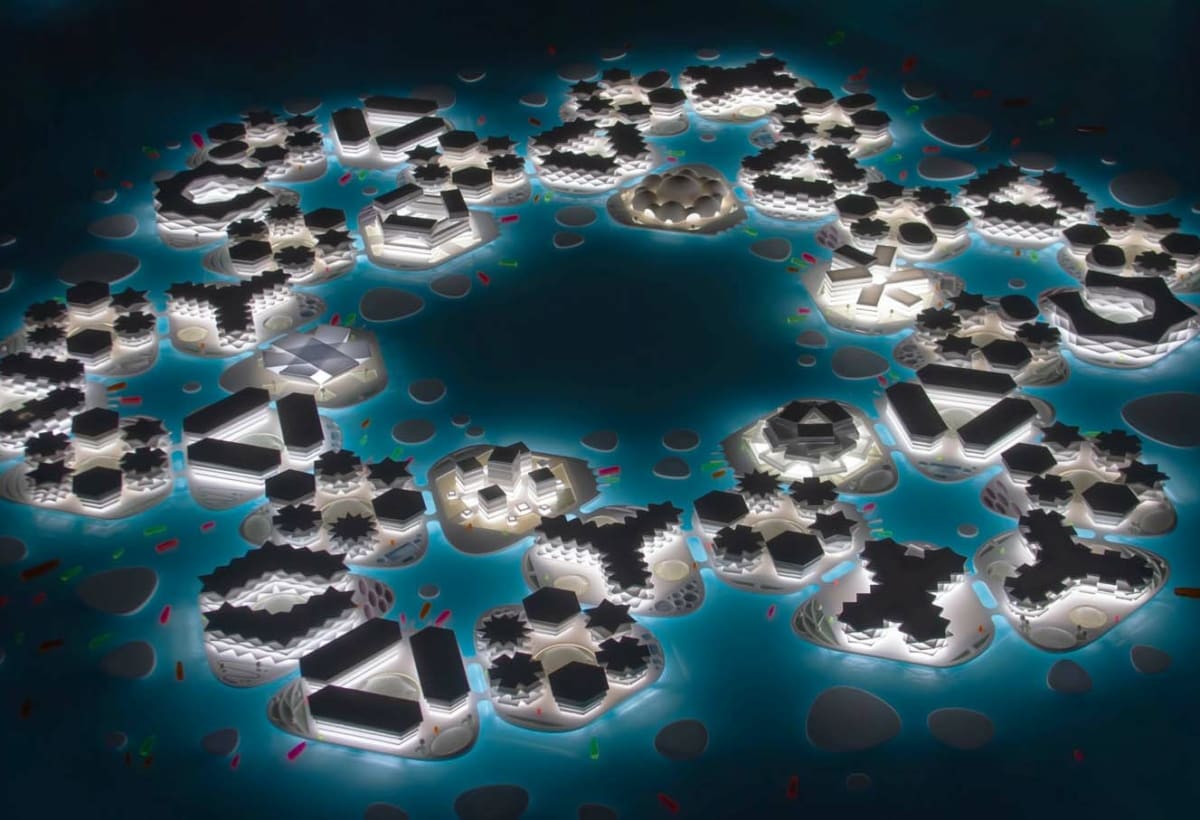 The free time of designers

Decorating with plants, tips for making your home greener