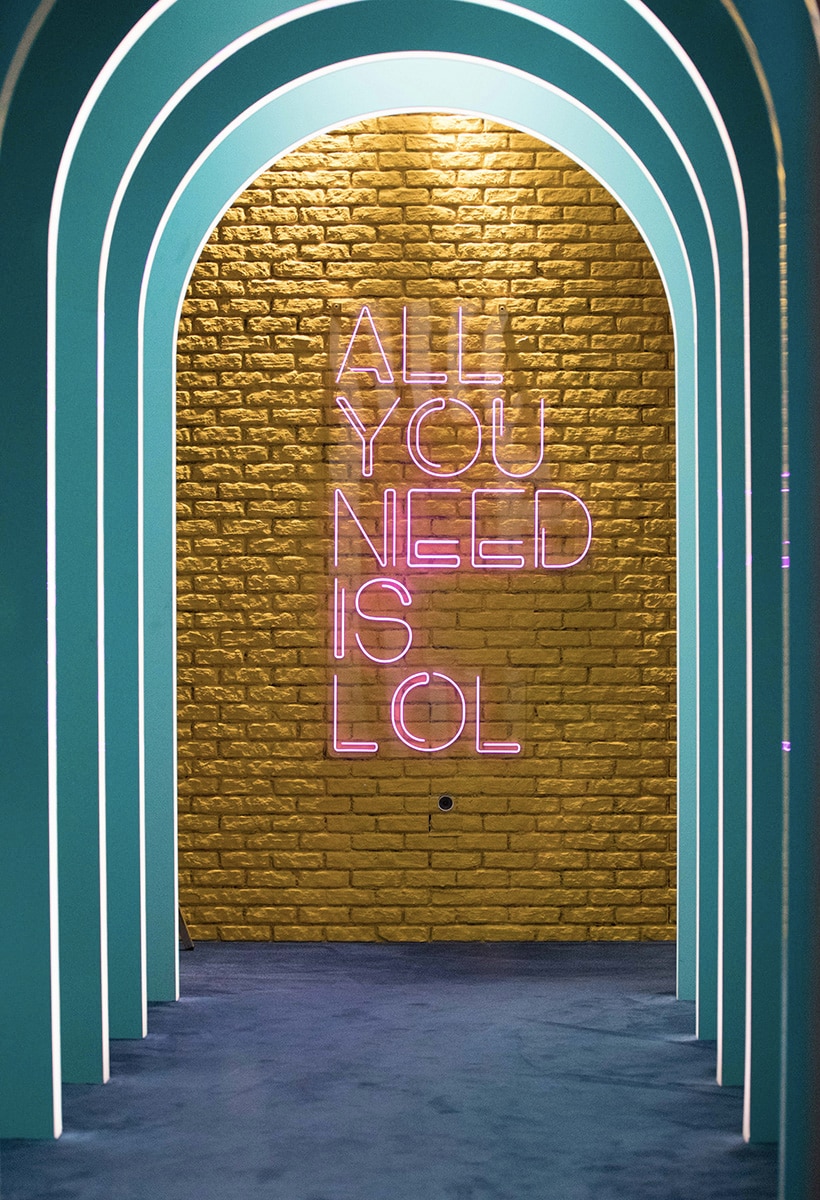 After the smash hit of the hilarious comedy show, Amazon Prime Video announces that there will be a third season of LOL, Who Laughs Is Out. The set is a Memphis-style chromatic explosion, a doll's box that tries to snatch a smile

For comedy fans, the long-awaited news has arrived: there will be a third season of LOL: Laughing Is Out, the hilarious comedy show by Prime Video in which ten laughter professionals try in every way, from stand-up to improvisation, to make laugh at colleagues without ever giving in to the jokes of the opponents, in a challenge to the last sketch. 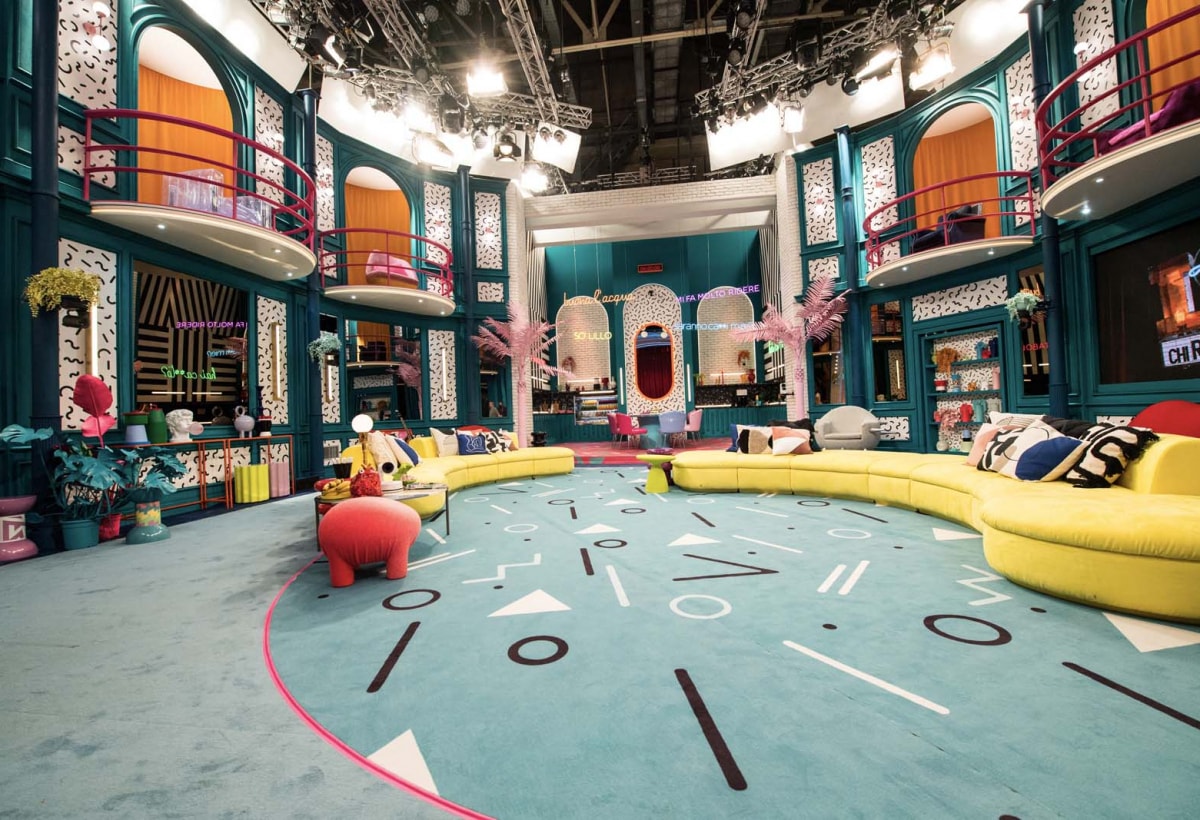 The LOL Set: Laughing Is Out

A gag competition, produced by Endemol Shine Italy for Amazon Studios, which develops in a highly design setting, a joyful and carefree setting that mirrors the humor of the actors.

"Since the first edition, we wanted to give an all-Italian imprinting to the local version of the international format, with a layout with balconies reminiscent of the Italian theater, a structure that we proudly export to the world", he says the set designer Francesco Mari. “If in last year's set we recreated a fairly realistic environment, in the second season we focused even more on“ more is more ”, with a maximalist scene given by the superimposition of geometries, shapes and patterns”. 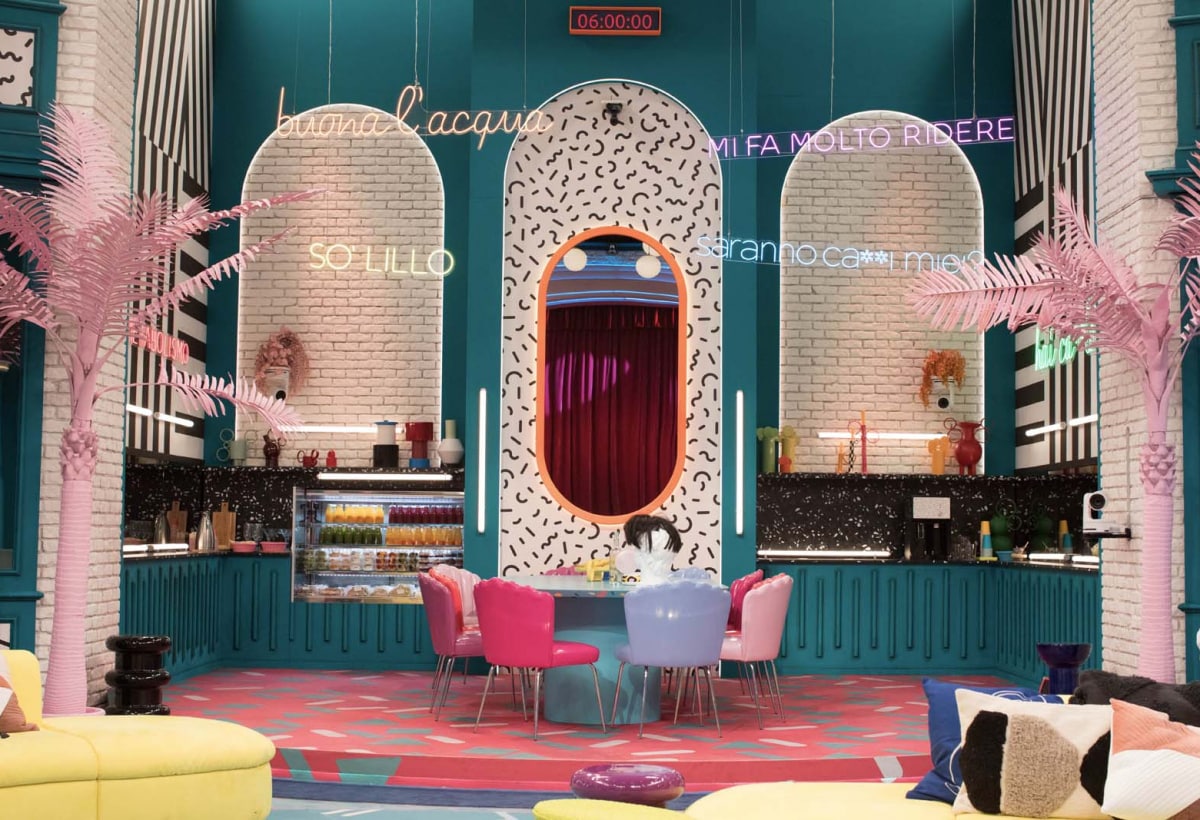 A tribute to the Memphis movement

The set of LOL 2 is an Italian-style theater Memphis style: "I am a great lover of the Memphis style, it is a language that lends itself well to television, but it is difficult to have the right opportunity to propose it, because the risk is that it will turn out to be a bit "children's TV". In fact, given the nature of the program, so ironic and fun, I was able to dare and conceive the space as a huge doll's house, without male or female, where everything is allowed. I took the stylistic features of the Memphis group and reinterpreted them to the extreme, mixing them in this colorful and lively stage".

The result is a playful architecture that does not want to be a simple container, but becomes a protagonist space where the design is functional to the competition and often the driving force of the scenes: "We spend whole days hypothesizing the movements of competitors, to try to conduct the actions in areas more visible to the cameras. The objects are not merely decorative, but suggest movements, the actors play with the plants until they almost throw them on, move the seats and use them as bases for their sketches, like Corrado Guzzanti who staged one of his legendary telesales sitting on the Bomb armchair by Adrenalina". 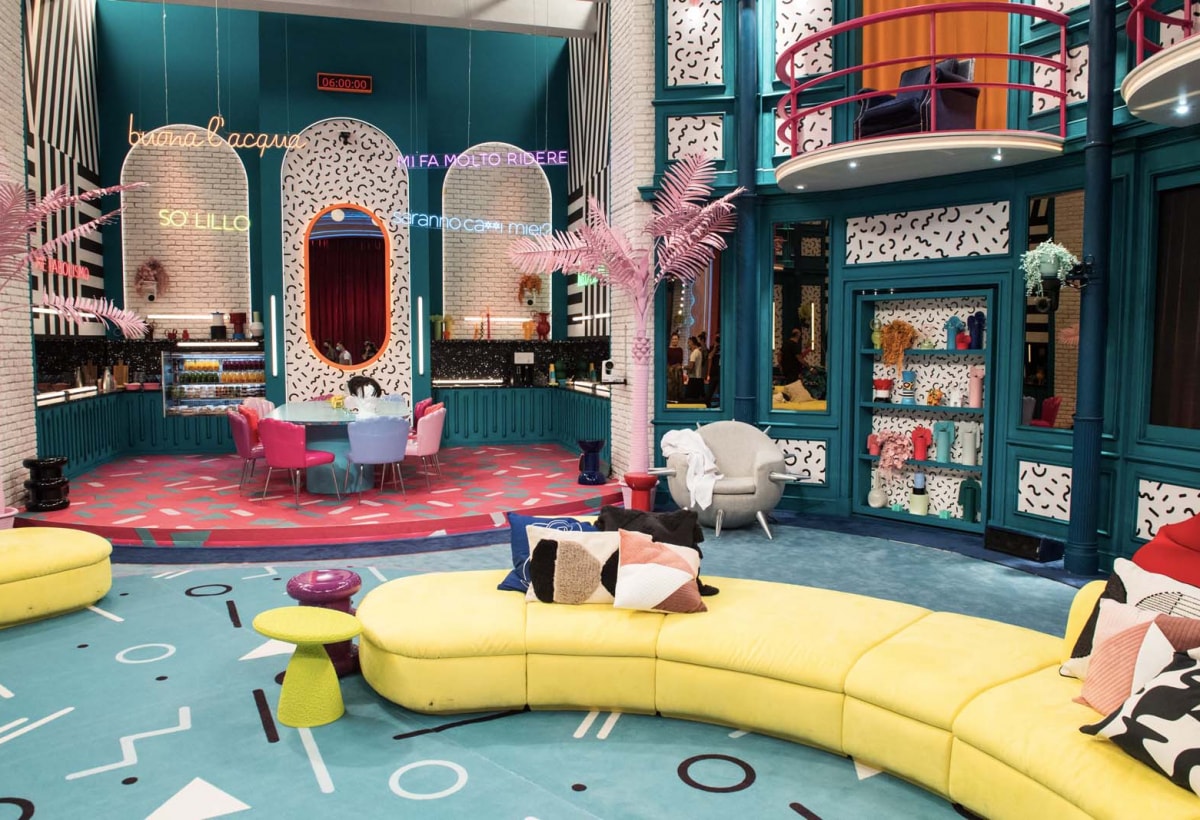 Among the furnishings stand out the Cactus coat hanger and the Bocca sofa by Gufram, the The Big Easy armchair by Ron Arad and Alessandra by Javier Mariscal for Moroso, the inflatable sofas of Mojow, the bar counter in the shape of an American 1960s car: "Pieces with a strong impact, which strike the public generalist, even non-experts of design, Italian masterpieces together with foreign forays and custom-made furniture made to my design, like the yellow banana sofa in the central room, and the wallpapers that are a graphic reworking of the Bacterium pattern by Ettore Sottsass for Abet Laminati". 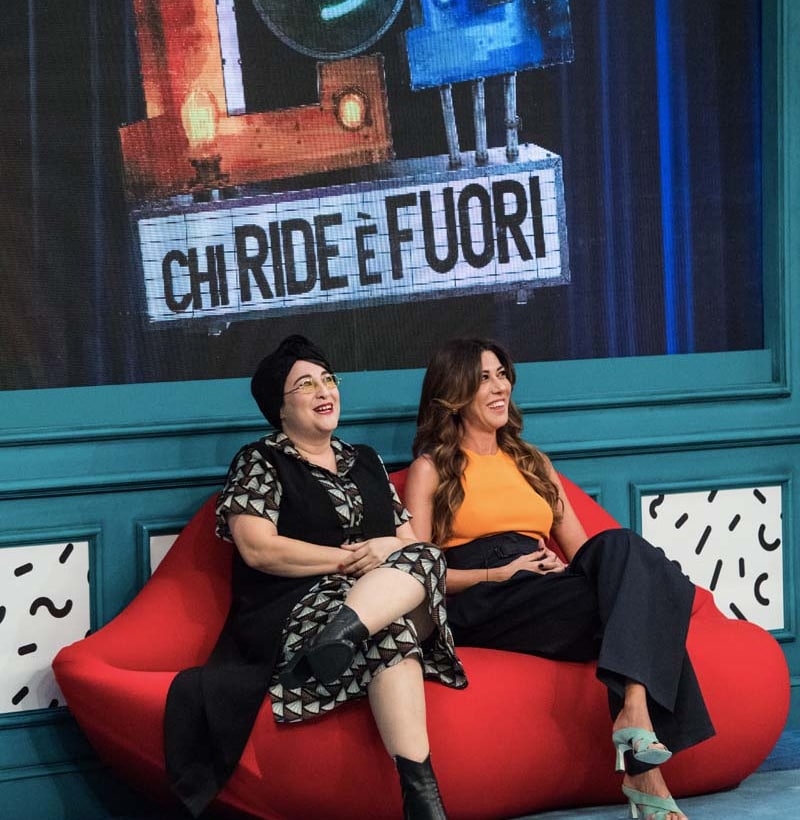 The LOL museum and neon quotes

New this year, the LOL museum and the LED signs that mention the memes of the first edition: "We created the LOL museum with the display cases that contain the memorabilia of the first year, the shirt sweaty by Frank Matano, Elio's tap shoes, Miss Italia's black swimsuit with headband by Caterina Guzzanti, Posaman's swimsuit, the microphone with which Katia Follesa made advertisements at the supermarket, a sort of handover also underlined by the neon signs of Neon Flex Mood, quotes from the most famous phrases of the first season, such as So 'Lillo by Pasquale Petrolo aka Lillo, You shit by Angelo Pintus and He makes me laugh a lot by Elio". 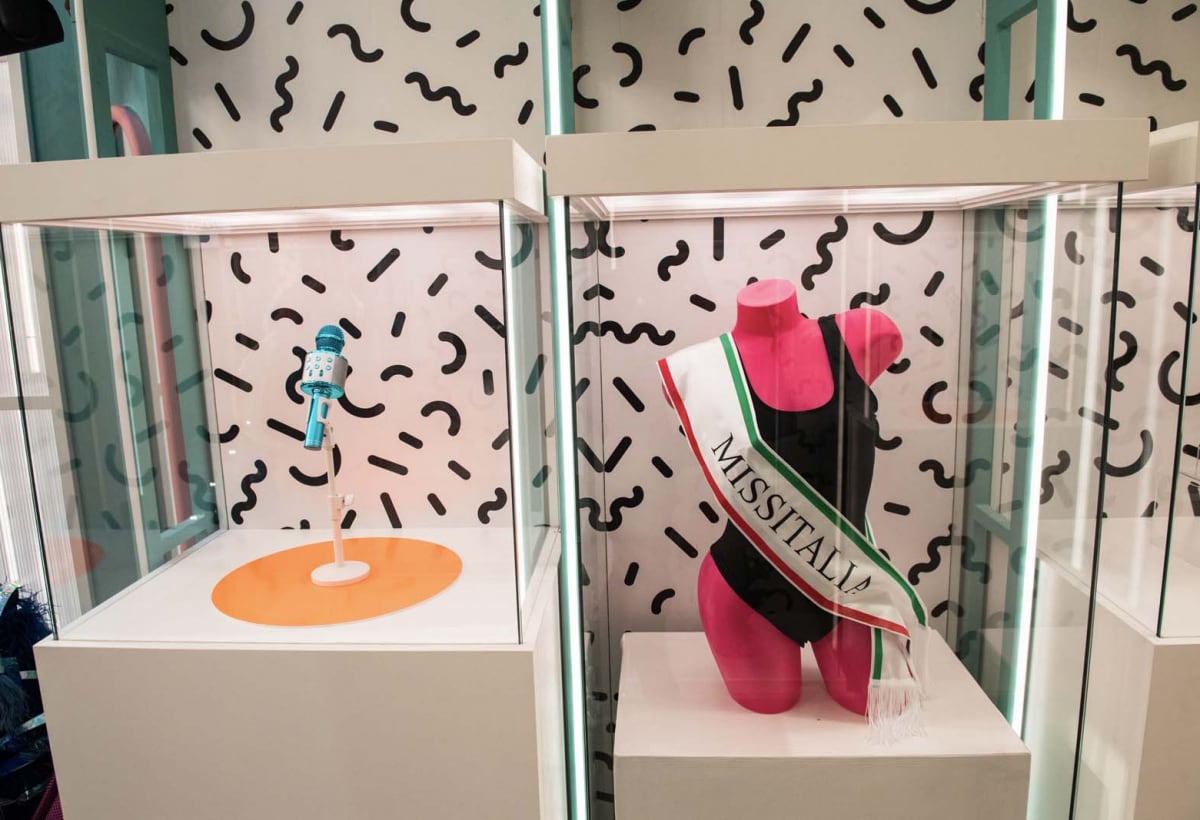 A set that with its eccentric and exuberant design tears the smile, a box in which to take refuge and leave the whole world outside, especially when life plays tricks, as witnessed by Fedez himself, conductor together with Frank Matano of LOL2, who shared his illness in the stories of Instagram, "a bit to exorcise, in the hope that it will be good for me, and for others".