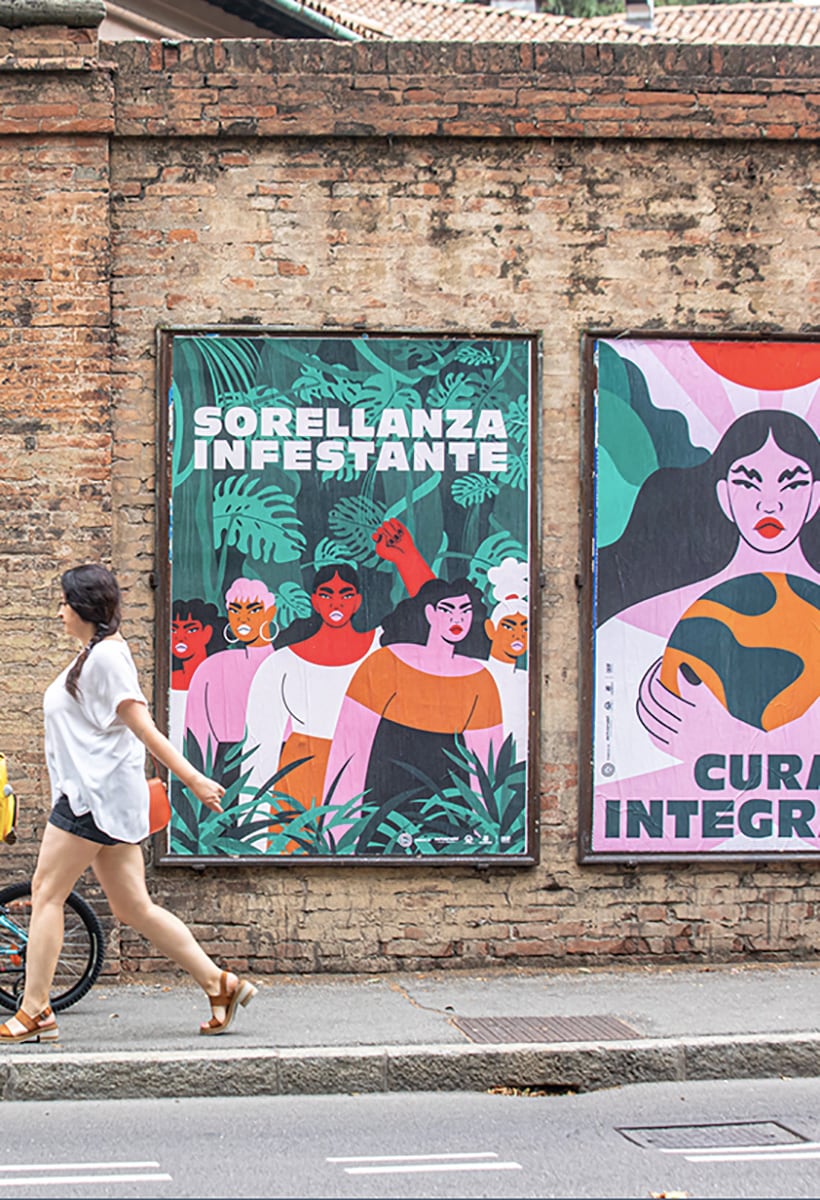 When art meets the city

Feminism
When art meets the city

CHEAP and Guerrilla Girls: two public art practices with a transfeminist approach compared, between re-appropriation of space and self-determination

By public art we mean a form of art that enters the social and urban fabric, creating a close relationship with the city and its citizens and towns. There is no decorative purpose in these interventions: art is the tool with which to relate, expose oneself and expose urgent themes.

Public art does not want to make the city more beautiful, it does not enter the rhetoric of redevelopment. On the contrary, it fights the monumental forms, the pedestals, the celebratory tones to get on a par with those who cross and live in the places where they are located.

Among the numerous examples, we explore the work of two projects that make art a tool for the feminist re-appropriation of space and words in the urban context: CHEAP in Italy and the Guerrilla Girls in the United States. 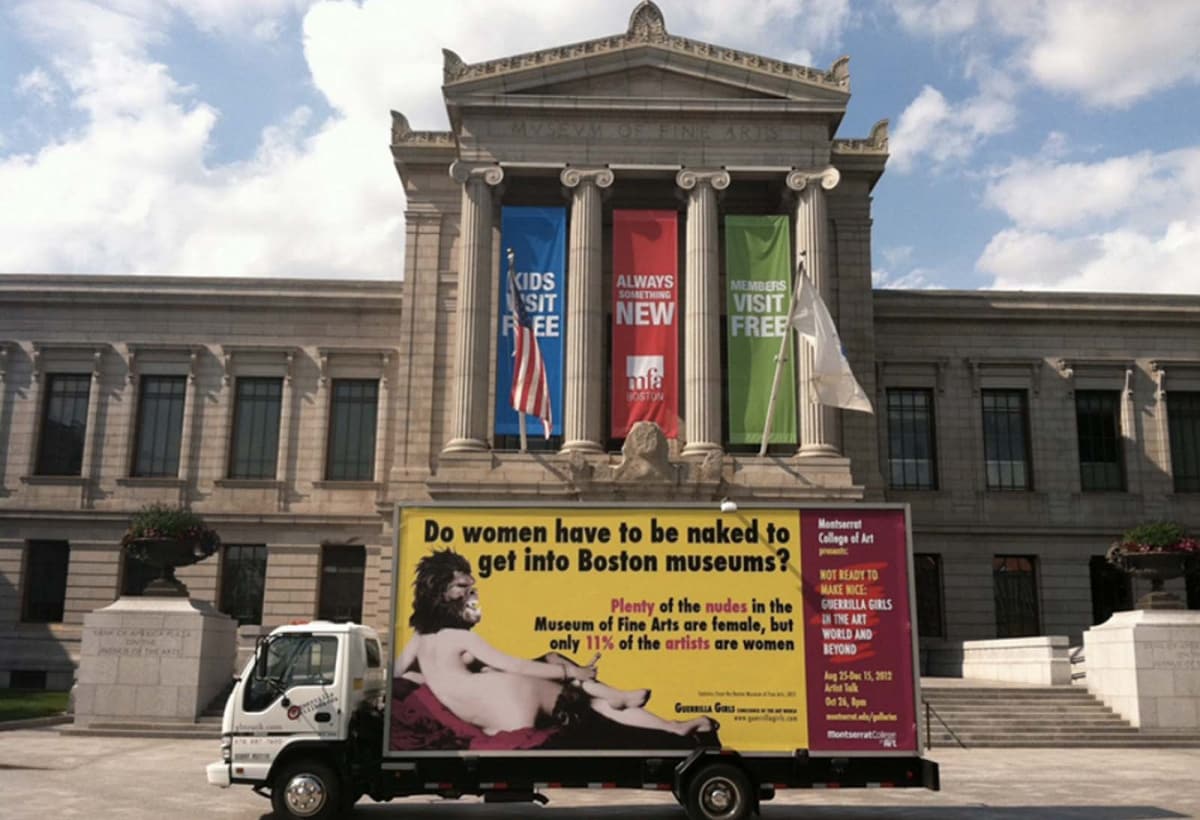 The Guerrilla Girls in the United States

The Guerrilla Girls are a group of anonymous artists and activists in business since 1984. They believe in an intersectional feminism that fights for the rights of all people and expose gender and ethnic prejudices in the world of art, film culture and politics through deadly stats, outrageous imagery and shattering headlines.

On their website, they recount their debut as follows: "On June 14, 1984 we went to a protest in front of the MoMA where there was a retrospective of 169 artists, with only 13 women and even fewer black artists. We were shocked: none of the museum visitors seemed to care! 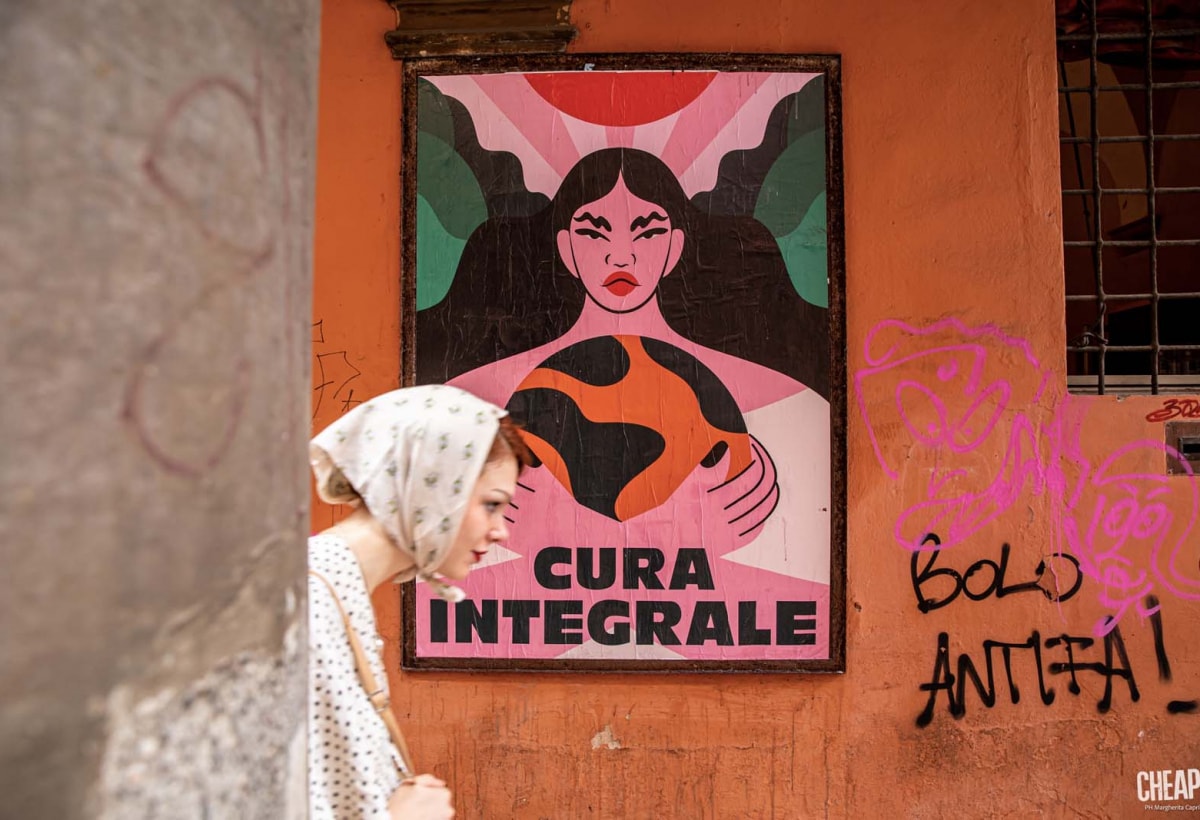 This was the 'AHA! Moment'. There had to be a better way - more contemporary, creative - to break through the popular belief that there was no discrimination in the world of art. We had the idea of making street posters. Those early posters sparked a public discussion that is still ongoing. Our kind of crazy activism (using facts and humor) has become a model for hundreds of thousands of people around the world who want to use their creativity to fight for the issues they care about. "

As real performers , during their interventions the Guerrilla Girls wear gorilla masks to remain anonymous , and in the interviews they appropriate the names of the artists of the past: from Kathe Kollowitz to Georgia O'Kieffe, from Frida Kahlo to Sofonisba Anguissola. 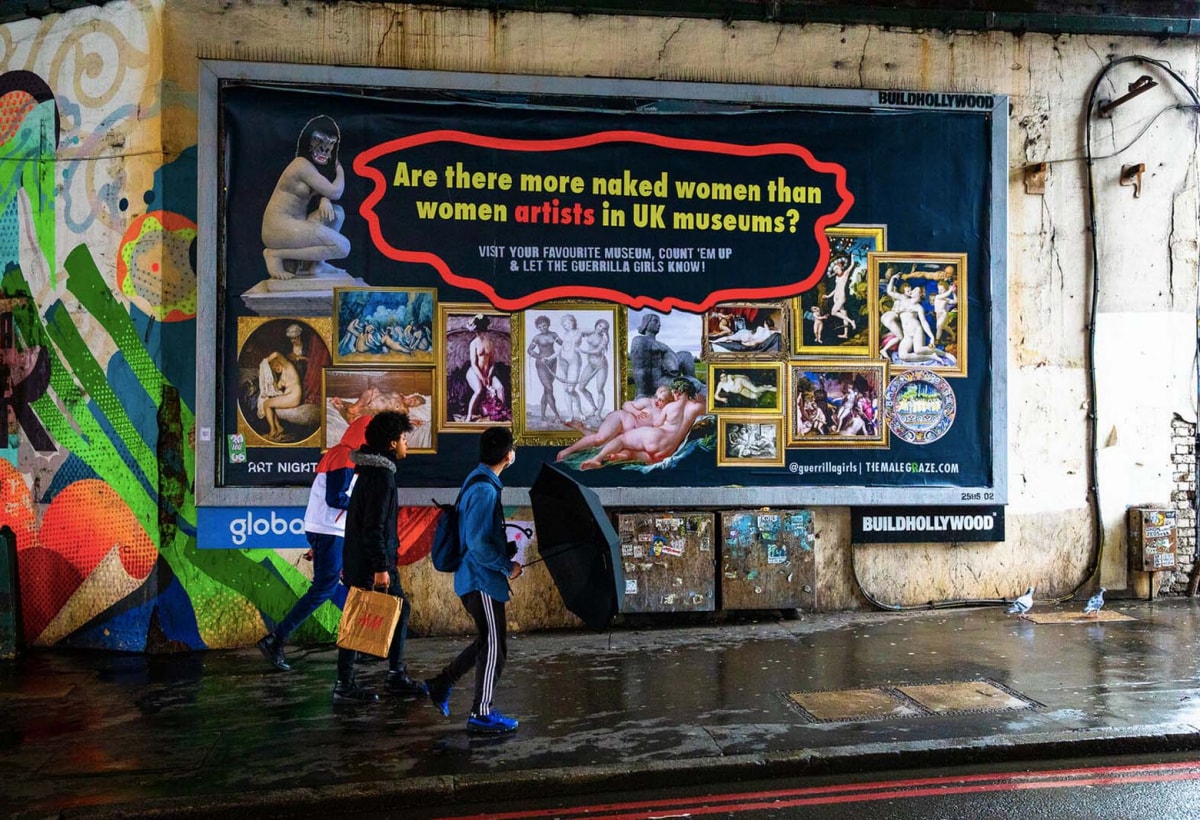 The practice of CHEAP, between art and activism

"CHEAP was born from the determination of six women from different but similar backgrounds - says one of the founders. The idea is to use an evanescent tool like paper to start, with the technique of the paste up, a investigation into the city, crossing it and investigating its mobile body and the flows that create the urban fabric!

Active since 2013 CHEAP has a past as a festival and then transformed into a project not subject to certain temporalities and free to move, in balance between curatorial practice and activism.

"Our transfeminist practice - explains CHEAP - arises from the reflection of how public space is designed around exclusion lines based on gender, race and class. From this starting point, we we move to semantically reoccupy the walls and try to trip within the public discourse and bring a strong charge of openness and dialogue around the theme of the reappropriation of desire and right around the body of women and of non-binary and queer subjectivities." 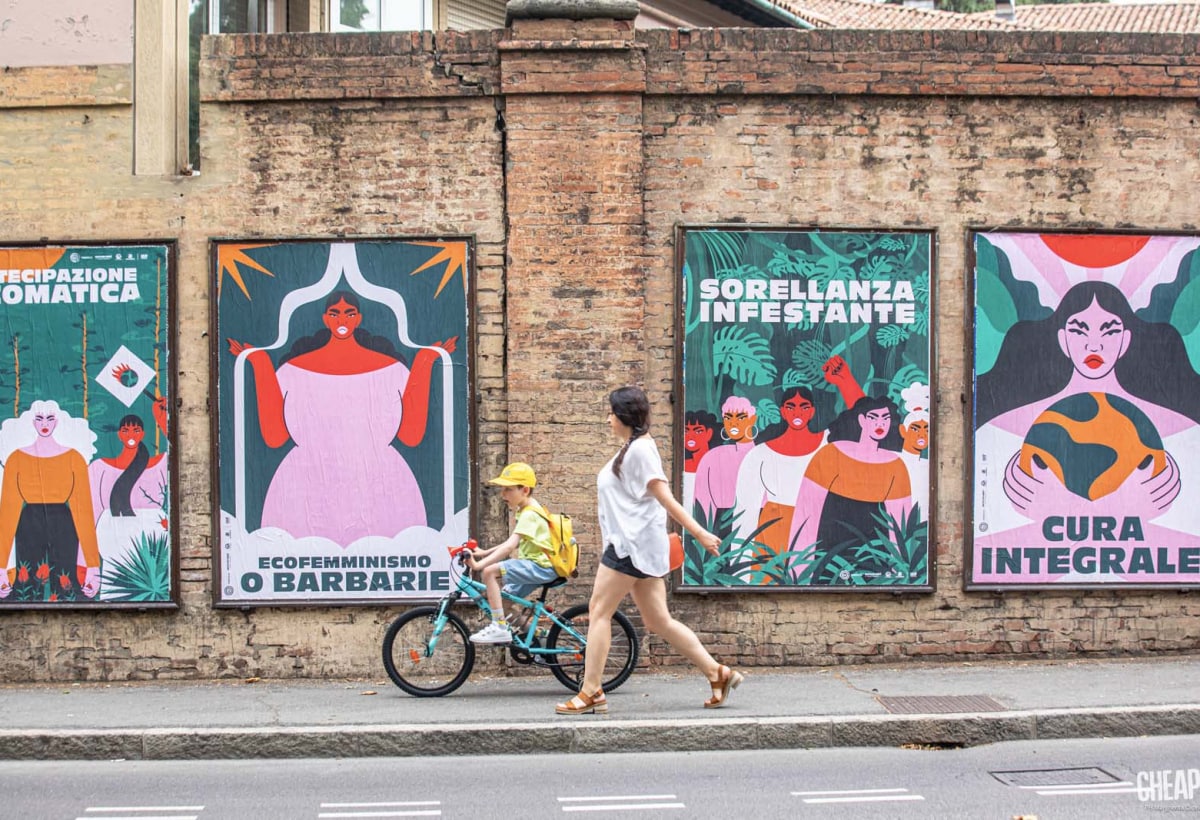 The transfeminist approach is joined by an intersectional gaze aimed at investigating how our multiple identities can be objects of exclusion or privilege and to address urgent issues and strictly connected to contemporaneity: climate change, the right to citizenship, the stigma of HIV-positive, gender-based violence, evil gaze and the women's body politic.

"Intersectionality is an ever-changing paradigm," they explain from CHEAP. "For us there is the curatorial need to structure processes that are truly intersectional, experimenting with new tools of participation, of speaking, of reappropriation of space as well as of public discourse.

We feel the need to find formal solutions to express the polyphony that every feminist conversation brings with it: in this sense, we think that in the creation of a wall by different artists who working with different media resonates the idea of ​​a plural feminism".

The last two CHEAP billboards - still visible in the streets of Bologna - carry on these reflections. In TACI, or rather LET'S TALK - installation of posters made by Bruna Alcantara, Camila Rosa, Cartel de Caracas, Coco Guzmán, Diana Ejaita, Giulia Mazza, Mafreshou, Marta Iorio, Muna Mussie and Yele - the interpretation is linear and focused on feminist empowerment, to claim full citizenship, self-determination of bodies and futures, right to the city and a feminist design and political idea of ​​urban space.

Ecofeminism or barbarism, an artistic project exhibited on the occasion of the Festival of Participation at the invitation of ActionAid Italy, crosses the radical approach to ecology, indivisible from social justice. Created by the Brazilian illustrator Camila Rosa and distributed throughout the center of Bologna, the set of posters places feminist speeches within the ecological discourse, insinuating an idea of ​​justice that can be combined both in social and environmental, together.

The reflections mix with indigenous movements and in the footsteps traced by Donna Haraway, Masanobu Fukuoka, Gilles Deleuze and  Laura Clean. It is from this compost that CHEAP proceeds with the artistic direction: on the double track of curating images and making claims, within which to contaminate human behavior and non-human strategies.

For CHEAP and Guerrilla Girls art acts as a detonator, it doesn't want to please or look pretty: it wants to shake, raise questions, activate imagination and give voice to those on the sidelines of the routes of privilege.

Above all, they want to surprise our daily trajectories, interrupt a phone call, provoke a reaction. It is an artistic practice that is not afraid of bringing out conflicts also because, to paraphrase Leslie Kern, there can be no social change without men and women who fights for it.

The feminist city: an inclusive approach to urban space