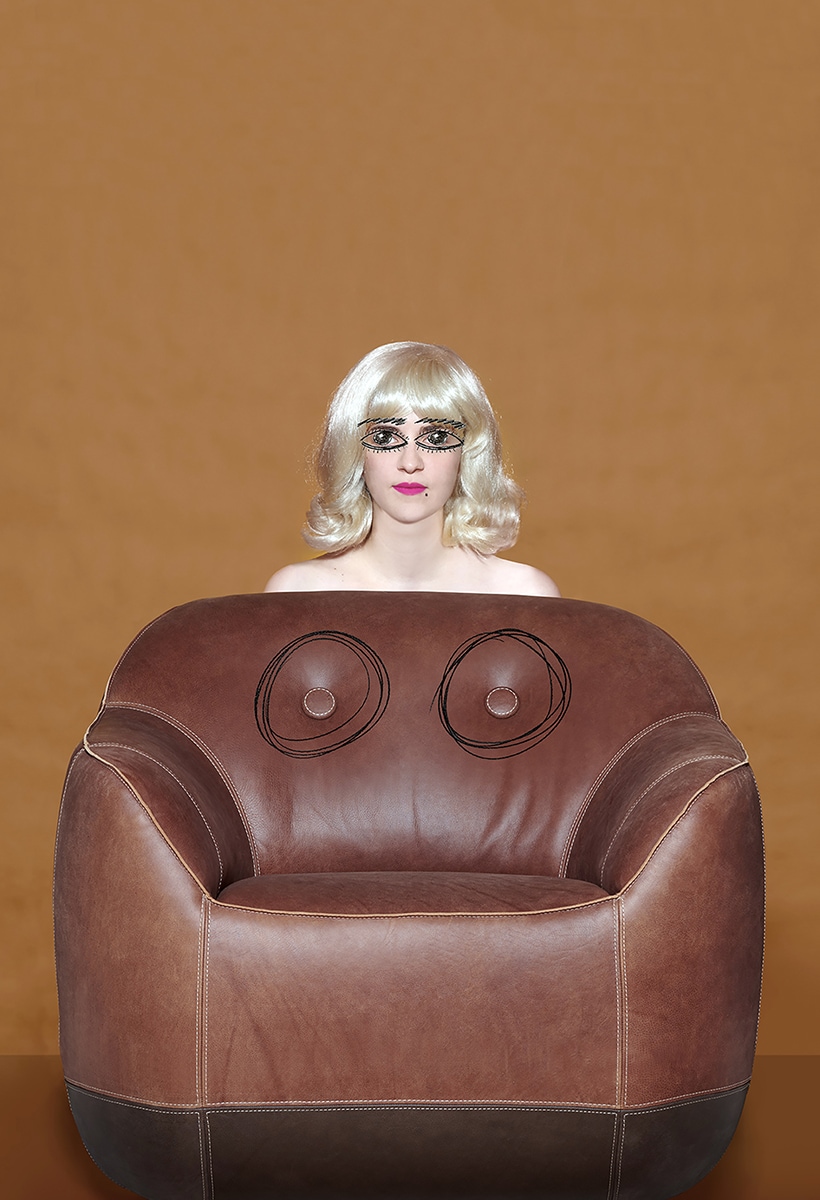 Revived by a smile

#design
Revived by a smile
Disorienting and betraying expectations, overturning logic and questioning customs: to bring true lightness you need extreme rigor. The history of irony in Italian design

An automatic daisy picker for lazy lovers, armchairs-radiators for chronic colds and coffee pots for masochists: with handle and spout on the same side.

In these funny, strange and, in their way of plausible objects there is above all a fundamental characteristic: irony. A disorientation and betrayal of expectations which, to quote Freud, represent the main qualities of wit.

It is no coincidence that Jacques Carelman, the mind and hand of these Unavailable Objects, was someone who, before becoming a designer, had to do with teeth. From Marseille, where he was born in 1929, he moved to Paris, first being a dentist, then a set designer and an illustrator. It was the end of the 60s, in full economic boom and of incredible fervor for industrial design. Carelman made sketches and prototypes of infinite products: bathtubs for stingy people (today we would call them eco-sustainable), pipes for the indecisive, combs for bald people or converging tandems.

Pioneer of the genre was then Bruno Munari in the Futurist era with his Useless Machines of 1930 which stemmed from the same desire for experimentation and freedom. Eclectic and irreverent, the architect, artist and designer is considered the father of ironic design: which he considered not as a genre but as a gaze to observe the world. “Munari is a small man with the astonished expression of a child" wrote writer Dino Buzzati, “he likes to laugh at extravagant devices but takes them very seriously”.

And in this consideration by the great writer of one of the fathers of Italian design there is perhaps the secret of irony - the subtle, intelligent and one that makes you think: overturning logic, reversing custom but with extreme rigor. In short, bring lightness, without losing sight of the need to give meaning and meaning to things.

Like that masterpiece of innovation and friendliness that Munari designed in 1945: the Chair for very short visits. Perfect for elevators, daughter-in-law visits, mother-in-law and former lovers, the  Zanotta Singer 5000 is equipped with a high backrest and short seat for a thickness of only twenty centimeters. 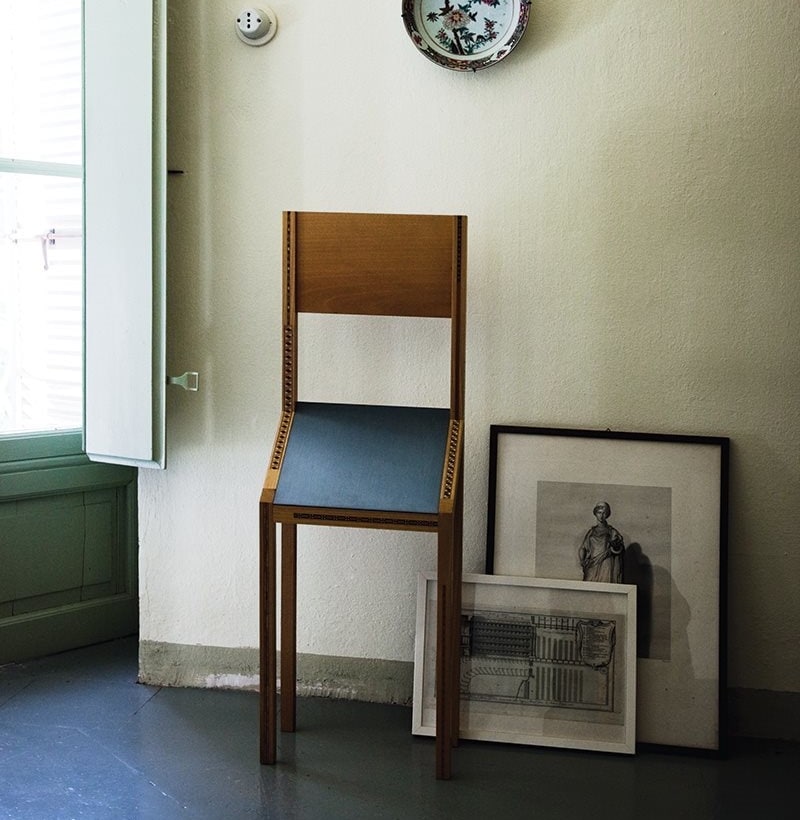 2
Fonte: zanotta.it - “When guests are without a smile. If life runs fast, if time accelerates existence, if frenzy steals time. Then the seat will be inclined, the seat shorter, the backrest higher: the chair will be for very short visits "Bruno Munari

With 1968, the year of demonstrations, movements and riots, came radical design, a term coined by critic Germano Celant during the XIV Milan Triennale. With Ufo, Archizoom Associati, Ugo La Pietra, Gaetano Pesce the design dictated only by functionality and aesthetic beauty leaves the way to freedom of expression, irony and change of standards. A few years later, in 1972, an exhibition that will make history was inaugurated at the MoMA in New York: Italy: The New Domestic Landscape. Seats, armchairs, radios, lamps, sofas, cutlery: 130 objects on stage, including conformist, reformist and protesting designers such as Joe Colombo, Gae Aulenti, Marco Zanuso, Richard Sapper. 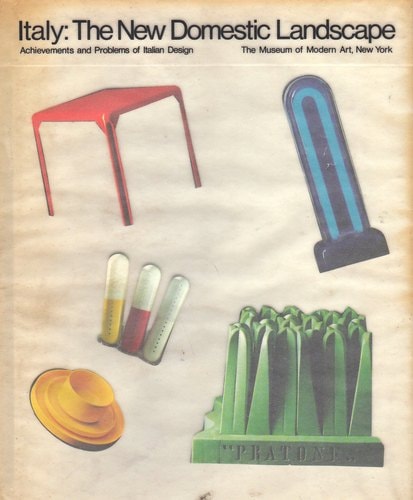 Things like the Serpentone sofa by Cini Boeri, the Pratone seat by Gufram - which still today continues to churn out ironic designs like the Blow sofa by Emanuele Magini (read here) for those who cannot afford the Costa Smeralda - and of course she, the redhead, the queen: Sottsass's Valentine. The typewriter that became an icon, invented nomadic work but above all showed a new portable way of writing love letters everywhere – Tinder, we can live without... 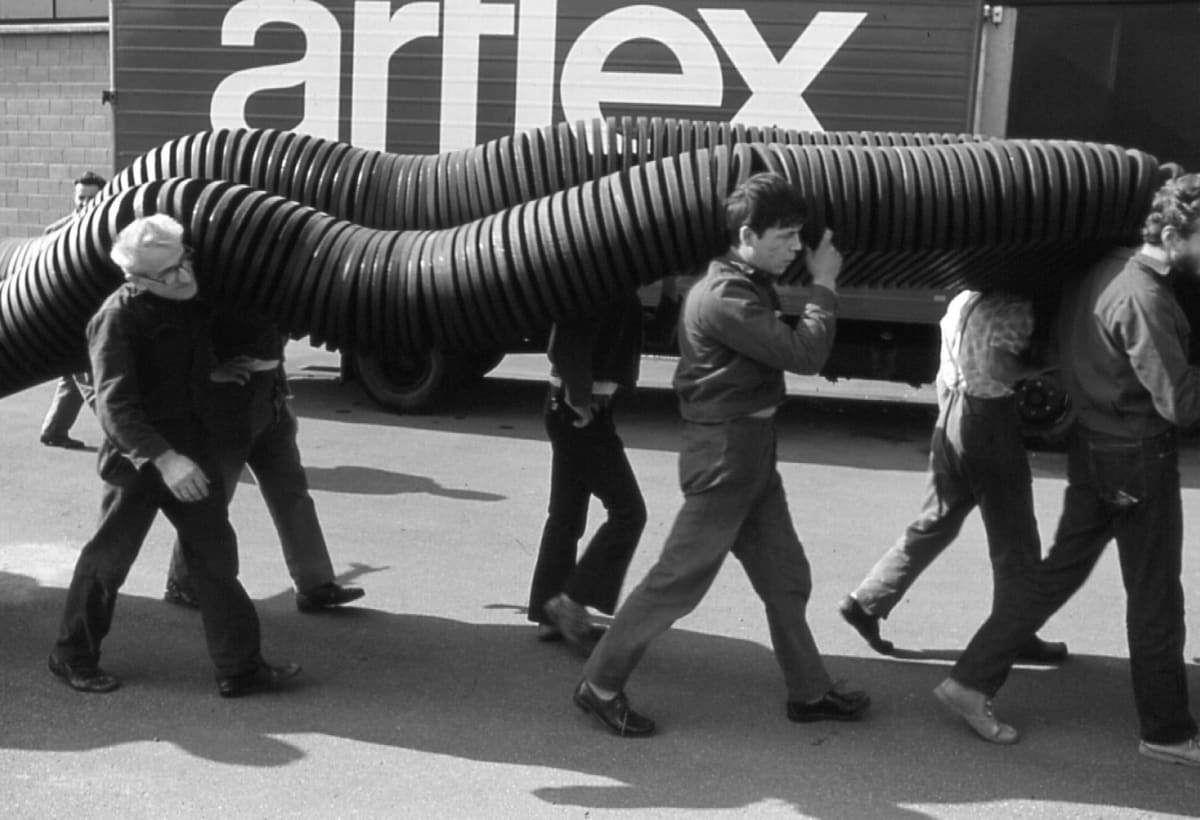 As for irony, poetic and lyrical metaphors, Ettore Sottsass, mustachioed and intellectual anarchist, was among the most original. “When we met” says his partner Barbara Radice (read here) “we went on a trip to Tunisia. The first night we slept in a kind of cave. The eating table was dirty, so Ettore went to the toilet to fetch a roll of mauve toilet paper with which he lined the table. He did things like this, Ettore ”. Then comes a revolution called Memphis, which gives the object its emotional and existential dimension, charged with a strong decorative and ironic element. 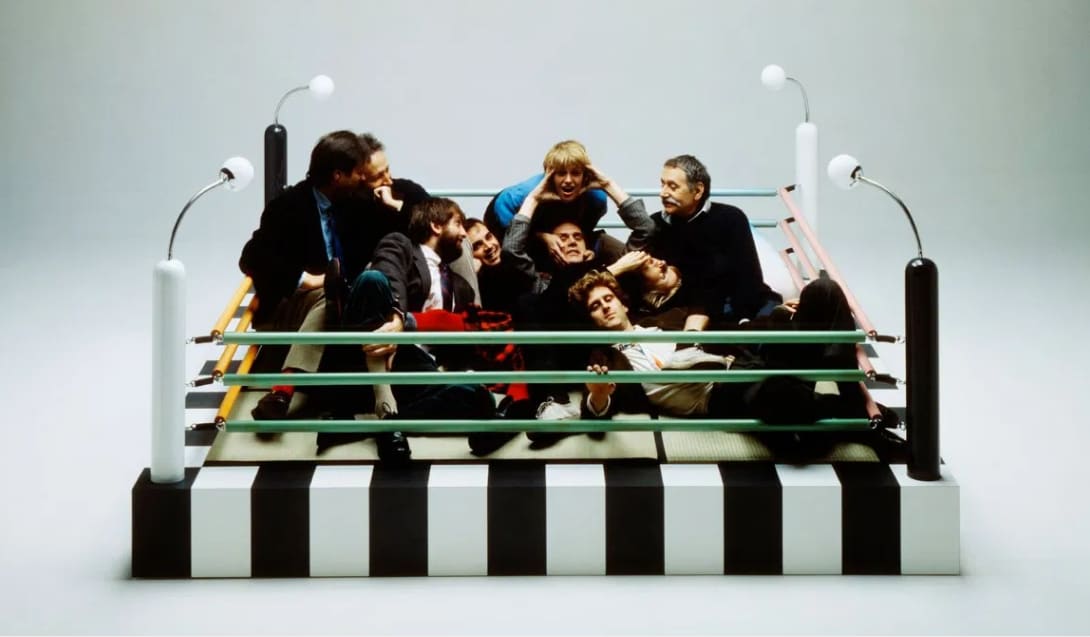 2
Ph. Studio Azzurro - Members of the Memphis group on the Ring sofa by Masanori Umeda, 1981

Then there is the pop of the 80s with the provocateur Philippe Starck, self-styled prince of the useless who has designed everything, from the juicer to the flip flops and Stefano Giovannoni, the designer from La Spezia a little heretic, a little cynical, a little playful, much loved by companies for his habit of churning out best sellers. Merdolino, the toilet brush for Alessi designed in 1993 that stylizes a sprout, is suitable for the most difficult situations, especially these days. 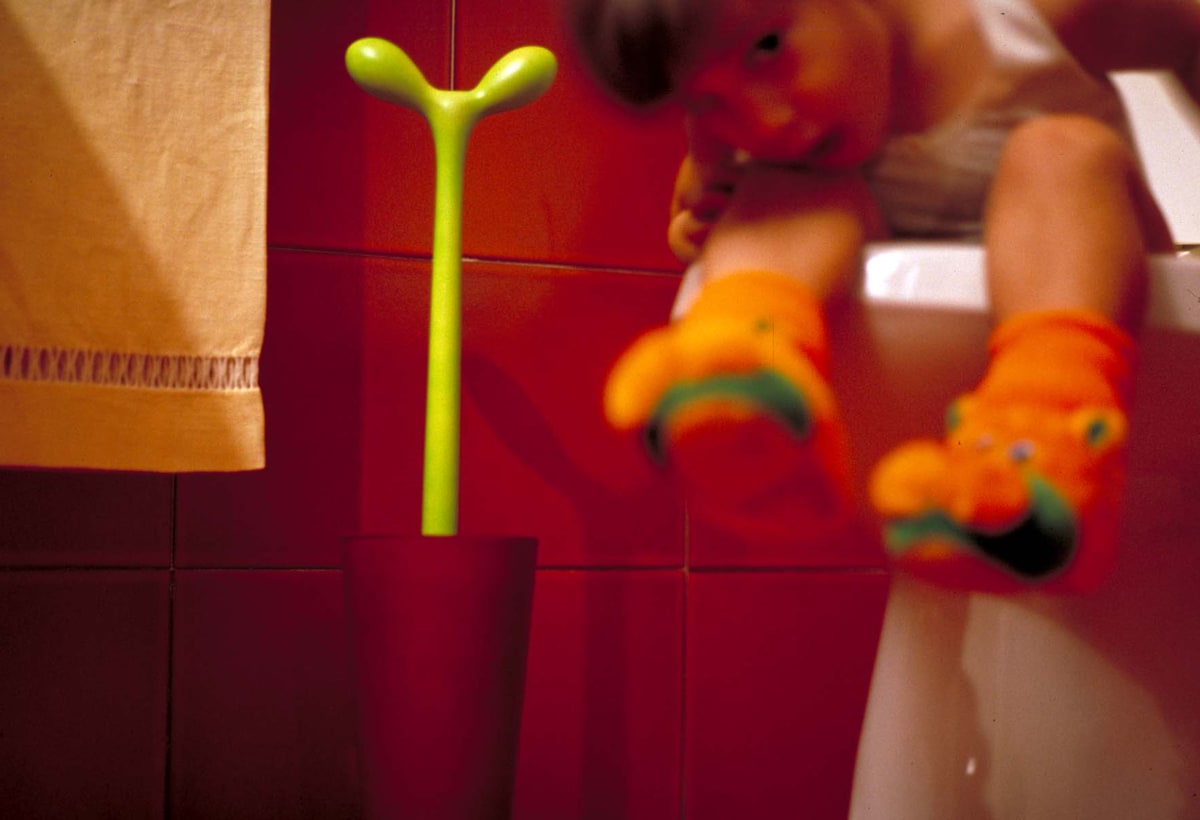 Dry, straightforward and ironic,the Dutch designer collective Droog was born in the early 90s by Gijs Bakker and Renny Ramakers, and it continues to design and manufacture furniture and furnishing elements in the name of original ideas and clear concepts, fun, thoughtful but never meaningless, like the sui generis chairs by Jurgen Bey or the chandeliers by Tejo Remy. 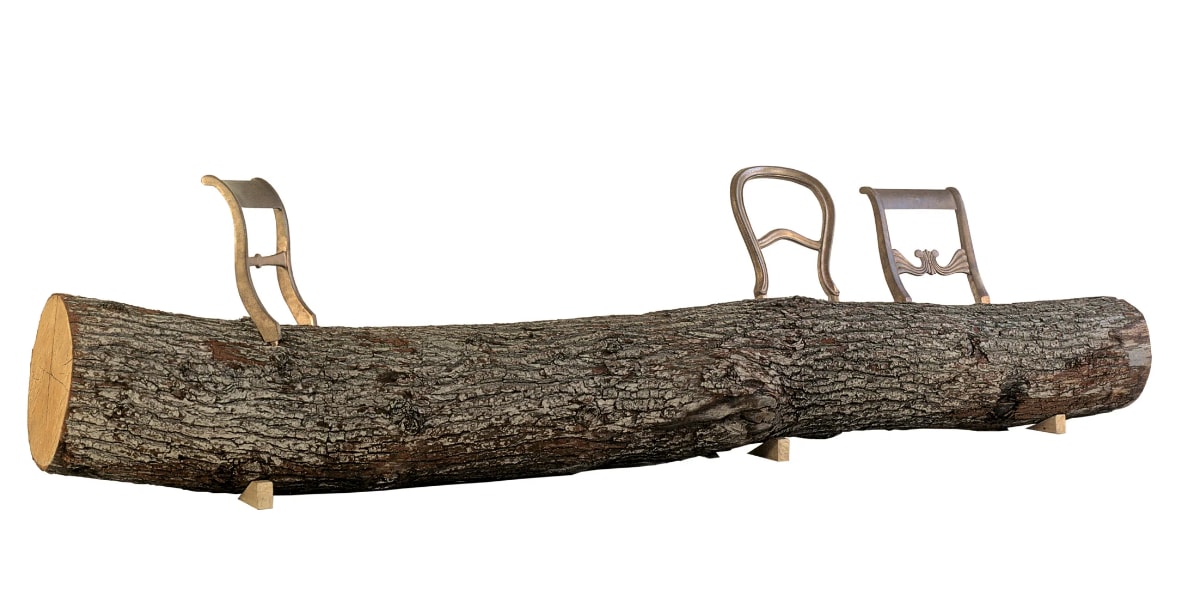 Among the most recent objects also those of the avant-garde designer Joe Velluto – alias Andrea Maragno and Sonia Tasca – who with their studio gave shape to pungent ideas: the RosAria, bubble wrap rosary, could not only become part of a contemporary manual of objects unobtainable, to be appreciated by the politicians of our house. 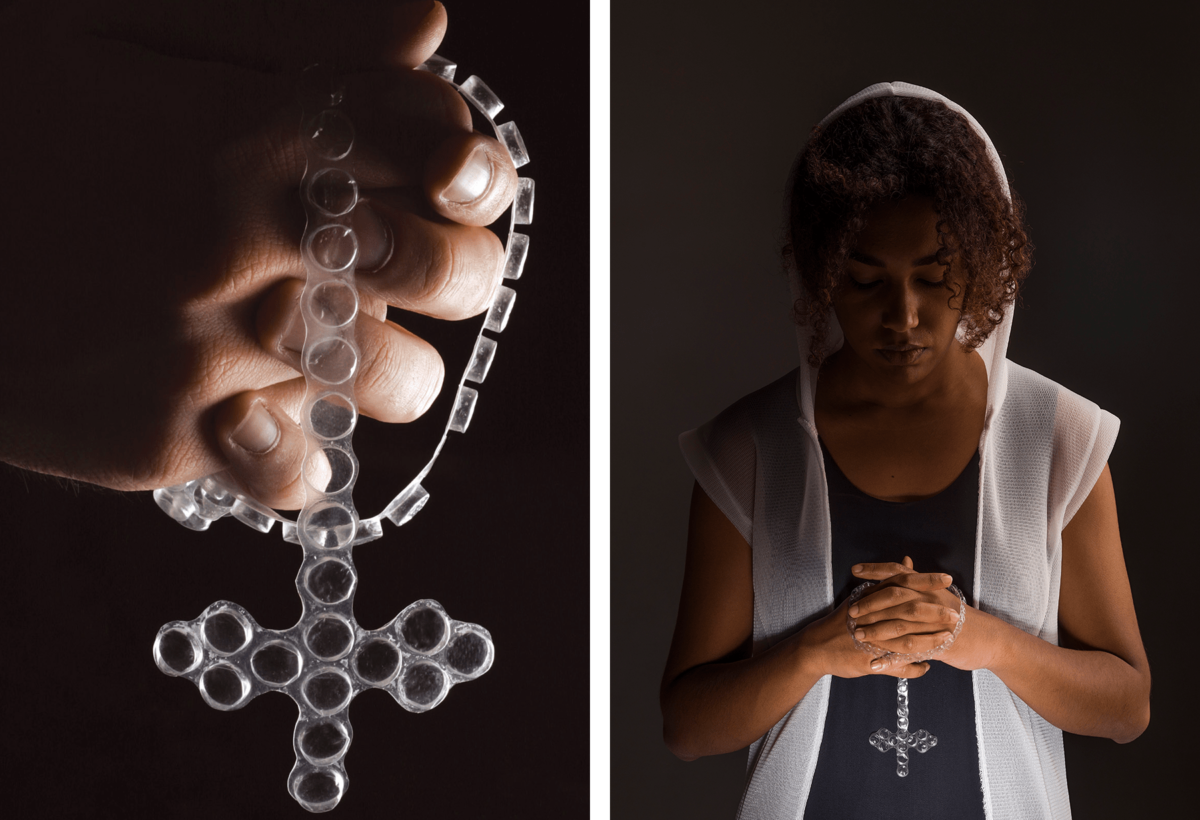