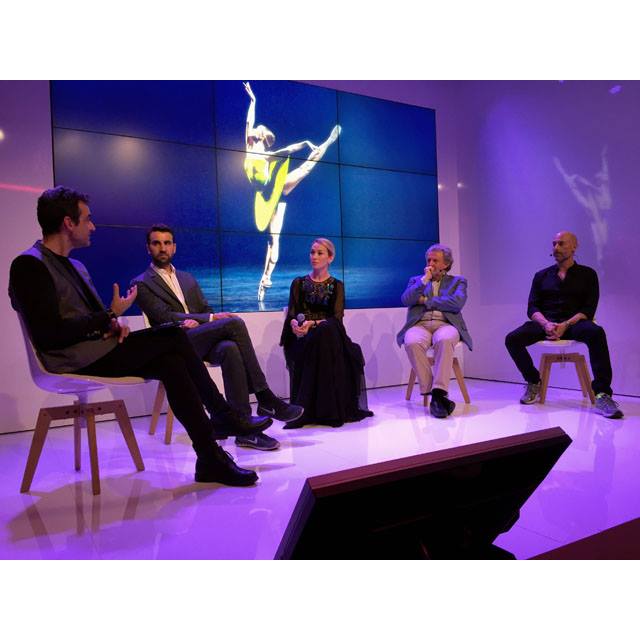 The theme dealt with in the evening of 14th April was Untaggable Energy, that is, the driving forces that create innovation and open up new perspectives for the future.

After the opening speech held by Massimo Faraò, Audi Marketing Director and host of the event, Gilda Boiardi, chief editor of Interni, recalled how FuoriSalone has been for twenty years one of these driving forces, with initiatives that have now developed throughout Milan, by extending its borders and identifying new development paths. It is no coincidence that the central theme of this design week is open borders, which means working on creativity and technology going beyond the traditional limits of disciplines.

Then Massimo Russo, co-editor of La Stampa and moderator of the debate, spoke with Franca Sozzani, chief editor of Conde Nast Italia, about how the city has changed according to the standpoint of an important observatory like that of the fashion industry.

“This industry has deeply changed and has extended”, explained Franca Sozzani. “Today everybody can talk about fashion, for instance, through social networks, and fashion is now an important reference point also for other artistic sectors, such as music, cinema and theatre”. In the past year Milan, which can count on the highest concentration of fashion houses and fashion designers, found new energy and opened up. Now more space should be given to the talent of new generations. “Standing out is difficult”, added Franca Sozzani, “but over time talented people can distinguish themselves”.

Also Eleonora Abbagnato, the star of the Opera House in Paris who left Palermo for the French capital when she was 11 years old, spoke about talents. Today she is the youngest director of a ballet school, the Opera House of Rome, and she has decided to put all her energy to the disposal of young people and promote the development of ballet in Italy. “We have talented people here and we don’t want to let them go”, she said. “But you need discipline and rigor”.

From ballet to the challenge of science. What’s the point of view of a mathematician on the fact that borders between the different cultures are disappearing? Piergiorgio Odifreddi, scientist and opinion leader, talked about the commitment of the scientific community to unite different theories, even though it is a very difficult task, for instance in physics. The fact is that culture is one and –as Piergiorgio Odifreddi said – the great scientists of the past, such as Descartes, were key figures in the culture of their time.

Also in other areas, such as radio broadcasting, contaminations encourage new experimentations. This was witnessed by Alessio Bertallot, radio personality and DJ. In the radio industry, he said, “nothing is lost, nothing is created, everything is transformed: this is the essence of creativity”. Also a DJ is a diffuser of culture, more specifically of music, and has a responsibility for those who listen to him. Radio broadcasts must try to spread culture by orienting information. This is the role of the radio industry compared to the Web: “rather than bringing the Web into the radio, we should bring the radio into the Web”, said the DJ, who since 2013 has created a streaming radio program on line. On the other hand, “Today’s revolution will not come from the Internet. It may develop in the streets”.

And it is in the streets of Matera that Joseph Grima, architect and curator, launched a project that will turn this town from Basilicata into a European capital of culture by 2019. “The town is like a battery, it’s a source of energy”, Grima declared. Matera is one of the few urban centres inhabited since the Neolithic, even though it is situated in a disadvantaged position due to water shortage, steep slopes and difficult communications. “But energy is Matera’s trump card, as well as optimism and its vital spirit.”

Now Grima is working in Mantua on a similar project, trying to seize the opportunities provided by architecture to create new and unexpected things. Such as, for instance, a project consisting of floating platforms on the lakes around this town of the Lombardy region, platforms on which art and music shows could take place.

This proves, concluded Massimo Russo, that mixing different disciplines – from mathematics to ballet, from music to architecture – you can go beyond borders and barriers, thus generating new energy and creating surprising scenarios.