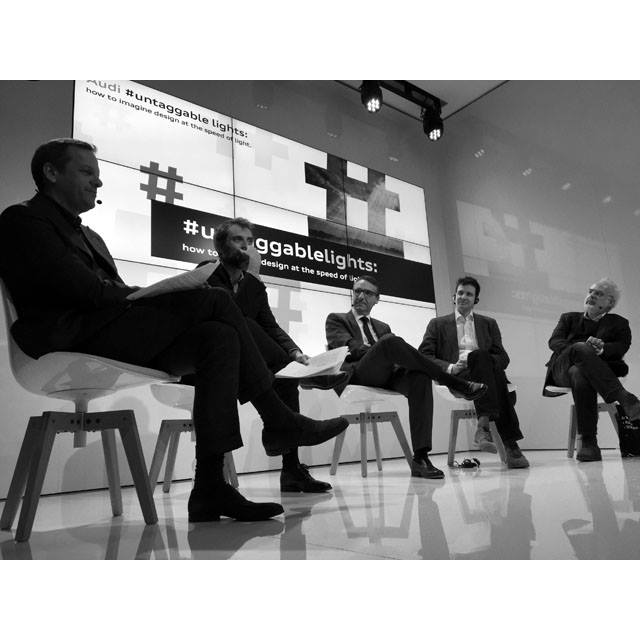 The last meeting of Untaggable Future at the Audi City Lab focused on the theme of light, or rather the different points of view on light as an element of creativity, technology, future, a theme tackled in first person by international experts like architect Daniel Libeskind, show creator Marco Balich, art critic Francesco Bonami, Audi’s light designer Cesar Muntada, and designer Axel Schmid, Ingo Maurer’s assistant (who was unable to attend the meeting).

The meeting – presented by Massimo Coppola, RAI consultant and film director – was opened by Daniel Libeskind with his passionate excursus on the philosophical concepts of time, space and technology: this great architect proposed his own vision of technology, which he defined as something “knocking on the door and waiting for someone to open” and he assimilated the concept of time to that of light, which are both elusive, but fundamental for life. According to Libeskind, in architecture light is the key factor in defining a building, a crucial element when developing projects.

Also for Marco Balich, creator and producer of great events and Olympic ceremonies (who is also in charge of Rio 2016 events), light is the absolute star of shows, both musical performances and scenic celebrations, and technology plays an ever more important role.

Cesar Muntada, head of lighting design for Audi, showed the technological progress associated with light in the car industry, with the application of lasers that can not only make light, but also detect obstacles.

Francesco Bonami dwelt on the controversial role of light in contemporary art. Light can be used as an artifice or a trick, but also with ability.

Axel Schmid, Ingo Maurer’s assistant, brought greetings from the great light designer through a letter in which Ingo Maurer, who described himself as a craftsman of light, shared with the audience the gist of his experience: “the most valuable light is the one that stems from Man’s heart”.