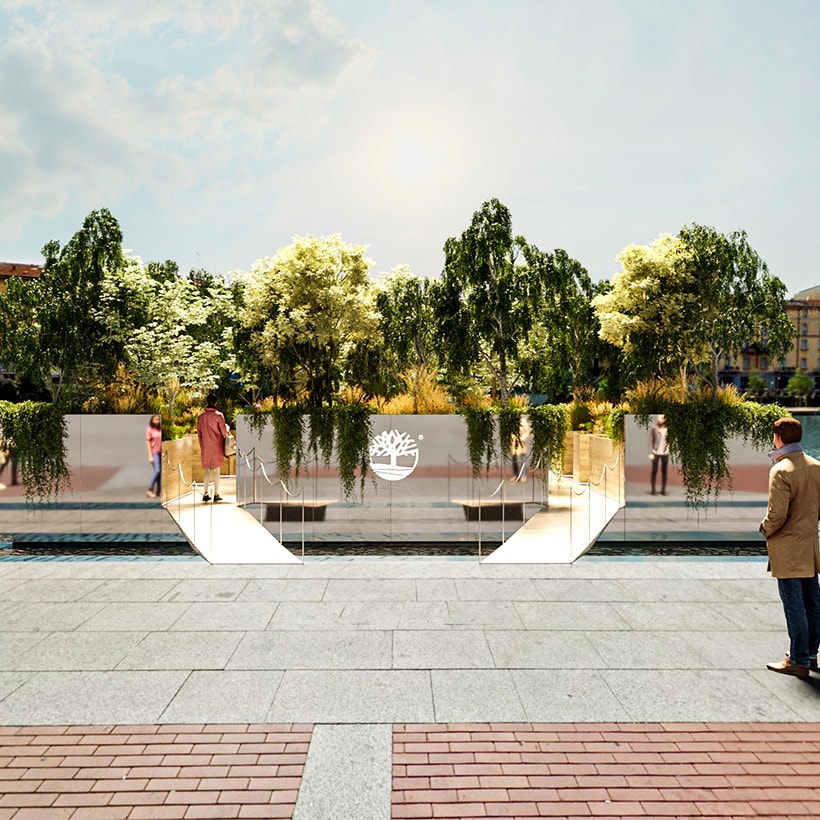 During the days of the design week, the streets are transformed into urban oases and lush gardens, where you can recharge yourself in contact with the vegetation, but also where to reflect on the fragility of the ecosystem

During the Design Week, the streets of Milan are transformed into urban oases and naturalistic micro-habitats, idyllic settings to recharge in contact with the vegetation, but also to reflect on fragility of the ecosystem and the importance of greening city centers.

The Design Week 2022 installations that bring nature to the city: the INTERNI selection 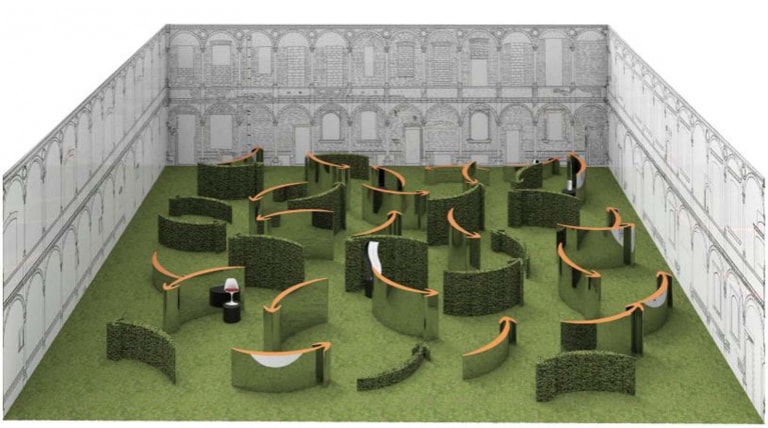 Botanical Garden of Brera - via Brera 28 / via Fiori Oscuri 4

An installation that allows you to enter a unique naturalistic place: the Orto Botanico di Brera, a historic garden squeezed between the buildings of the city center, extending for 5 thousand square meters, commissioned in 1775 by Maria Theresa of Austria and became a symbol of the Enlightenment culture of Milan in the late eighteenth century.

This evocative landscape setting will host Feeling The Energy by CRA - Carlo Ratti Associati and Italo Rota for Plenitude, within the largest Design Re-Generation exhibition-event by INTERNI. The path, made with 500 meters of antibacterial copper pipe supplied by KME, invites the public to discover, among the arboretum, the centuries-old plants and medicinal herbs, multiple forms of sustainable energy, and to play with the various phenomena of solar, wind and evaporative cooling. Copper, at the end of the exhibition, will be reused in a design circular perspective. 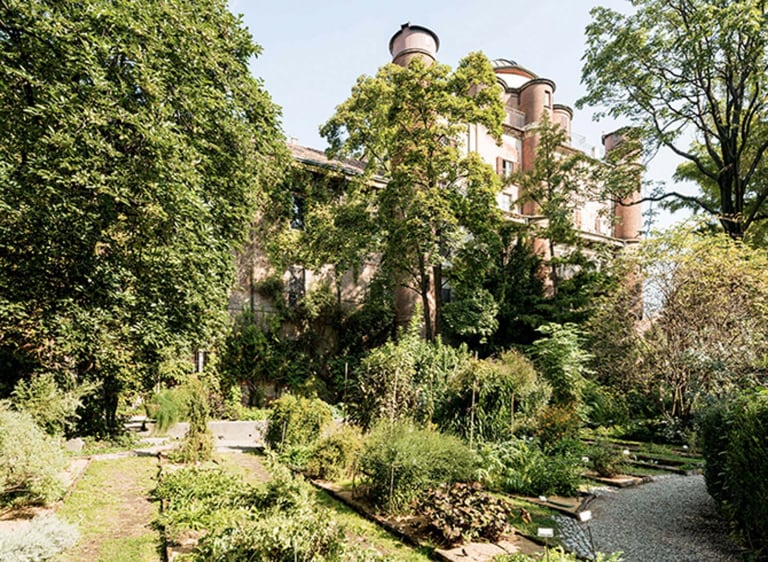 A floating forest on the water of the Darsena in Milan, which will not go unnoticed and promises to become one of the most instagrammed spots of Milan Design Week: it is Floating Forest, in the Tortona area, the installation of Timberland in collaboration with Stefano Boeri Interiors, who wants to reflect on the importance of greening urban areas.

A floating island that hosts a micro ecosystem independent, populated by hundreds of plants and shrubs of different varieties, whose mission is to bring greenery to the city. Here too, nothing is wasted: at the end of the design week, the trees will be donated to Soulfood Forestfarms Hub Italy, a non-profit organization committed to the ecological transition. 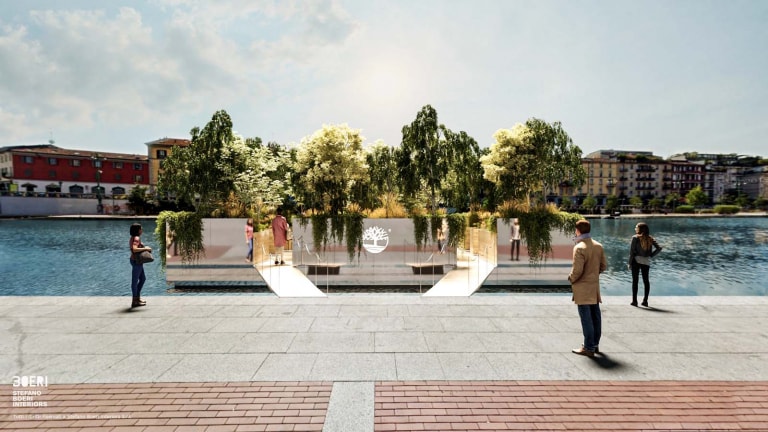 University of Milan, Courtyard of the Pharmacy

The labyrinthine Italian gardens are the protagonists of The A-maze Garden by Amazon , curated by the Lissoni Associati studio, as part of the Design Re-Generation exhibition by INTERNI. An art installation, with curved mirrored walls that recall the smile of the brand, scattered on the lawn like the decomposition of the tree of Piet Mondrian.

A project that talks about Amazon's environmental commitment with the Climate Pledge, co -founded in 2019 with Global Optimism and shared today by over 300 companies, whose goal is to achieve net zero CO2 emissions by 2040, together with the Parco Italia urban reforestation program, to plant 22 million trees in 14 Italian metropolitan areas, starting with Milan. 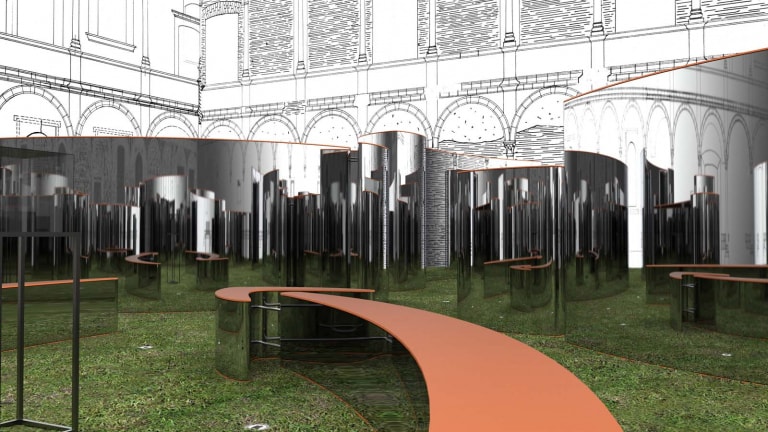 For those who are not afraid of getting lost, but rather want to get involved, with their mind and body, the destination not to be missed is Labyrinth Garden by Raphael Galiotto, an outdoor labyrinth made up of an articulated circular path developed on the 625 square meters of the lawn of the 18th century courtyard of the Ca 'Granda.

An experiential setting, created with Sipario dividing elements by Nardi in regenerated and 100% recyclable plastic. Without neglecting the playful aspect of the installation, Labyrinth Garden is also a metaphor for the period of bewilderment we are experiencing: rising above the labyrinth serves to look into the distance, to see ways exit and find answers. The project is part of INTERNI's Design Re-Generation exhibition-event. 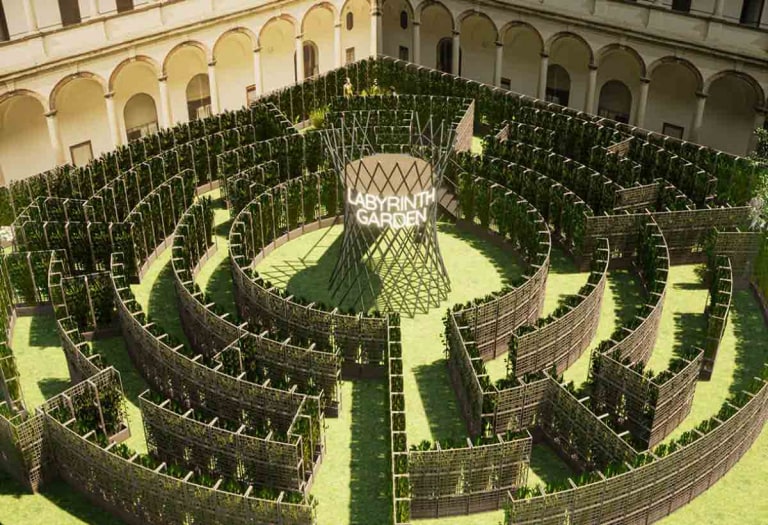 Completing the fragments of nature

The roundabout in via Bergognone, gateway and symbol of Tortona Design Week, will be transformed into an urban, virtual and physical garden. A project that does good on several fronts, because it brings greenery to the city, and promotes new talents: the installation is in fact signed by John Tracy Connor, Maryana Concepcion Heilman and Jing-Han Yang, students of Domus Academy and contest winners The roundabout - design with nature, launched in 2021 by Tortona Design Week and Domus Academy.

A revolutionary roundabout, also thanks to the collaboration of Urbo Style for outdoor furniture, Linea Light Group for lighting and Sense Immaterial Reality for multisensory experience between real and digital.

Completing the fragments of nature, winning project of The Roundabout competition: design with nature created by Tortona Design Week and Domus Academy.

The historic florist Radaelli, a space designed by Guglielmo Ulrich in 1945, hosts Florilegio by Cristina Celestino. An intervention, that of the designer originally from Pordenone, who takes inspiration and celebrates the soul of the place, and interacts with nature, sometimes in an alienating way, also thanks to the ironic use of mirrored objects. 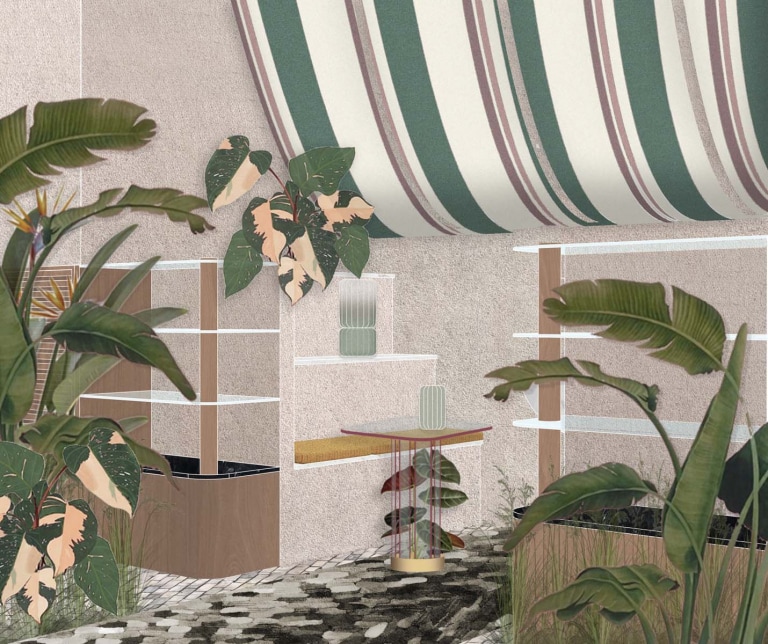 After SuperLoft (2018), SuperHotel (2019) and SuperCampus (2021), it is the turn of SuperGreen , curated by Giulio Cappellini, this year in tandem with Massimiliano Mandarini. A widespread installation, in the art-garden at the entrance of Superstudio Più , which tells about the new furniture en plein air in close and saving contact with nature.

On the green , the accessories for the garden by Paolelli Garden, the furnishings by Piero Lissoni and Patricia Urquiola for Janus et Cie , the stone flooring by Nerosicilia , the biophilic veranda by Massimiliano Mandarini with Gaviota Pergole Bioclimatic, and the A-House by Tiny Company, a glass house measuring just 25 square meters, by Lukáš Otevřel and Martin Stára from Perspektiv studio.

If you wander around the Isola Design District, Green Island deserves a pit stop, in the atrium of Porta Garibaldi Station, a flower garden with a series of small hives for solitary bees.

"Green Island is an Isola redevelopment project that has lasted for twenty years", says the creator Claudia Zanfi, art historian and landscape architect, as well as a passionate active beekeeper with the Beehives urban group. "We came to this neighborhood in 2001 when it was not yet beaten by design lovers, and to tell the truth it was also quite dangerous. This year we present the Giardino di Flora, an installation by Atelier Del Landscape with vegetation selected by the Nursery Coccetti , together with the botanical themed photos by Bloom&me, to the installation Monocle by Antonella De Nisco, master of natural weaving, and a Honeycomb by Caracol, Hives for solitary bees 3D printed with biodegradable and compostable plastic".

From 7 to 10 June, from 5 pm, there will be workshops on botanical themes and on the importance of protecting bees, insects that only live 20 days, vital for our existence. 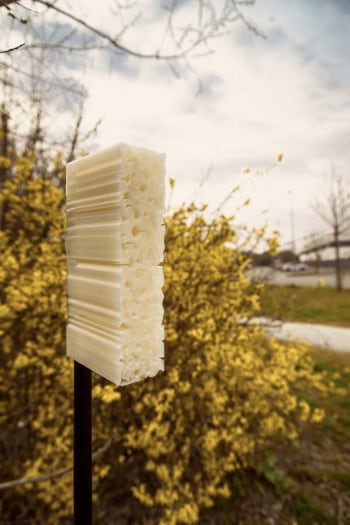 Piazza and cloister of the Church of San Marco, piazza and via San Marco 2

The churchyard of the historic basilica of San Marco, in the heart of the Brera Design District, is transformed into dOT - design outdoor taste, an Eden-living room en plein air of 700 square meters dedicated to conviviality in the open air. 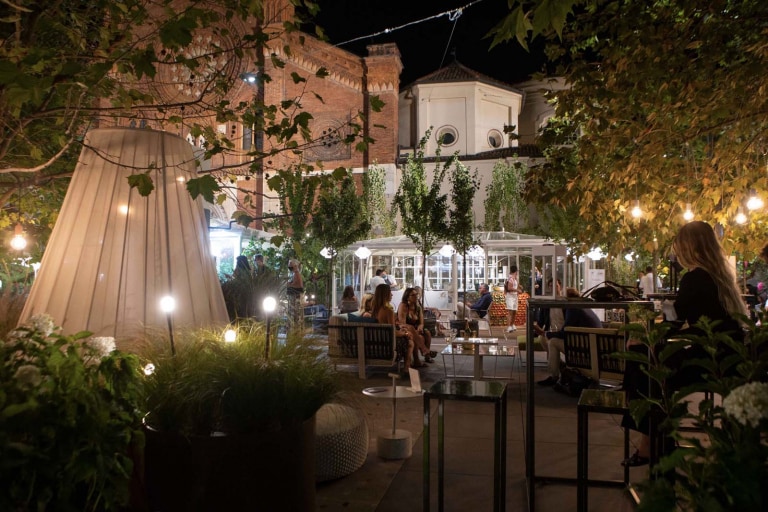 Not only gardens in bloom, but also immense ecosystems marine. On the occasion of World Oceans Day, on June 8, One Ocean Foundation launches the first edition of Milan Ocean Week, an initiative, supported by the prefecture and the municipality of Milan, which will take place in a widespread manner from 8 to 12 June and will involve the BAM - The Library of Trees , the Civic Aquarium, the Central water, the Museum of Natural History with a series of workshops and initiatives aimed at young people and citizens, and via Gesù, in the fashion district, which will become the street of the sea with an urban furniture set up made with recycled plastic recovered from the oceans.

Among the installations to 'dive into', Momentum at the Civic Aquarium, in the Brera district, designed by the Stark company, an interactive space which invites us to reflect on the concept of time and the effect of our behavior on the environment. 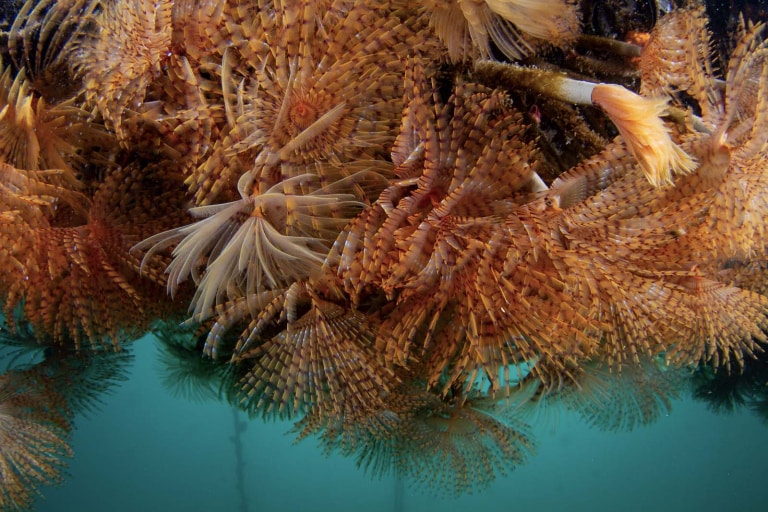 The good vibes and the blooming of Southern California warm Milan. It is Superbloom, the installation of Rios, a studio based in Los Angeles: no real vegetation, but a growing with natural evocations, from the Rain room, the rain room, where the public will be welcomed by the scent of earth and the arrhythmic ticking of the spring rains, to the Sprout room, the sprout room, and the Bloom Room, the bloom room, a fantastic dimension with multicolored giant flowers reproduced in methacrylate and fragrances that celebrate the awakening of nature. Rios' Superbloom exhibition will run until July. 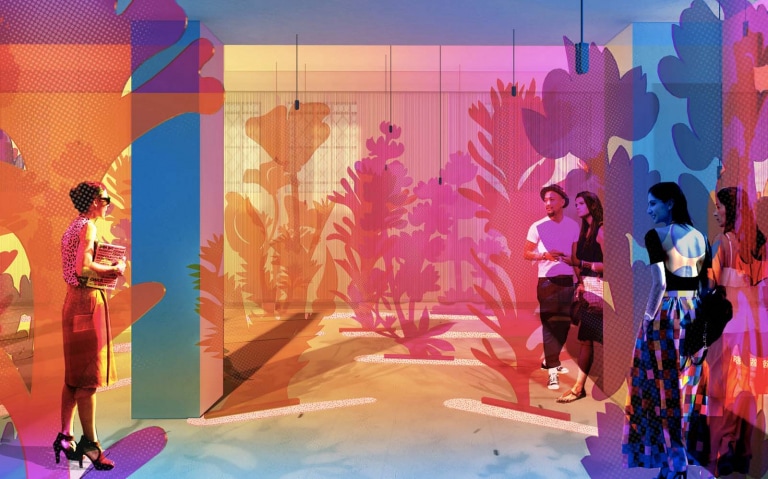 Many, many showrooms that will be transformed, for the design week, into living rooms en plein air, with real plants (or presumed such).

Mohd, for example, revolutionizes the interiors of the Milanese shop Mohd Officina with the Mohd in Bloom installation by Studiopepe, a set in pastel tones that recreates the atmosphere of a garden summer, with different varieties of plants (real), from laurel to broom, from shrubs with buds to meadows flowers, which, thanks to the scenographic game of mirrors, seem to multiply.

A fluid and impermanent nature, which reminds us of its transience, and the importance of protecting it. 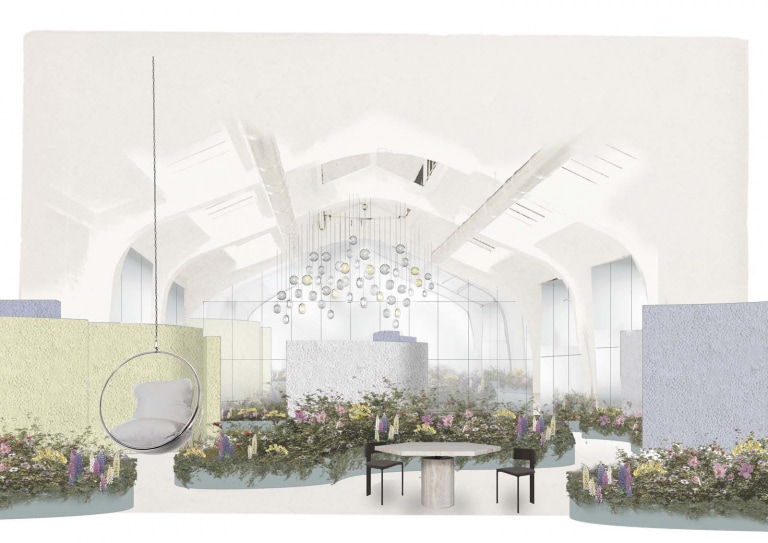