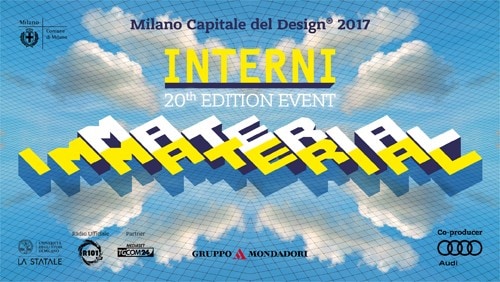 During FuoriSalone 2017 the magazine INTERNI presents the Exhibition-Event Interni Material Immaterial, in Milan, from 3 to 15 April. Interni Material Immaterial brings together a series of experimental and interactive installations of architecture and design, based on the collaboration between internationally acclaimed designers and outstanding companies, as well as startups and institutions.

Material Immaterial, the theme chosen by INTERNI, is an invitation to explore the dual spirit of design: on the one hand, the universe of materials, the physical, concrete essence of design; on the other, the immaterial dimension of creation, starting with the thinking of designers, increasingly aided by digital technologies and influenced by virtual reality.

The installations are by studios and designers of various origin – Japan, China, Russia, Brazil, Denmark, USA, Poland, Great Britain – as well as prestigious Italian personalities; they are made with the support of companies and institutions in the avant-garde, operating on global, national and local levels.

Wood, ceramics, metals, plastics and natural fibers, crafted and transformed thanks to specialized know-how and cutting-edge technologies, give form to the visions of designers, as they suggest perspectives on the areas of research for the near future: urban growth, the dynamics of global logistics, the pervasive presence of digital media, the management of immaterial data, but also research on objects and the values of beauty, new interpretations of convivial experience, the communicative power of light.

Audi City Lab at Corso Venezia 11 offers an original interpretation of the Material Immaterial theme with the program Future Needs Stories: in the spaces of the former Archiepiscopal Seminary, there will be encounters on the theme of the relationship between human beings and artificial intelligences, with the presentation of Sonic Pendulum.