At the ends of a stone tunnel composed of circular rings, the statue of vitruvian man and a video that reproduces moments of everyday life of a refugee

A voyage through time and space: this is the path through the tunnel of stone composed of rings created by the Lebanese architect Bernard Khoury and made in collaboration with Margraf.

The two extremities of the tunnel represent the starting and arrival points: at one end there is a statue of the Vitruvian Man, based on the famous figure by Leonardo inserted in the geometric forms of the square and the circle, immobile in its Renaissance perfection; at the other end, there is a video that shows the everyday gestures of an actor, a Syrian refugee, shot in a studio at Karantina in Beirut.

In the tunnel separating the two images visitors enter and become a third element between two opposites, between the ancient solidity of the marble figure and the volatile, contemporary character of the video.

A Lebanese architect based in Beirut, Bernard Khoury presents, in the Cortile d’Onore, the installation Vitruvius in Quarantine, made with Margraf. The company based in Chiampo (Vicenza) quarries and works over 200 types of marble, operating on an international level with the most famous designers and studios. 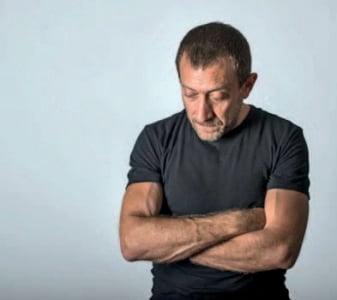