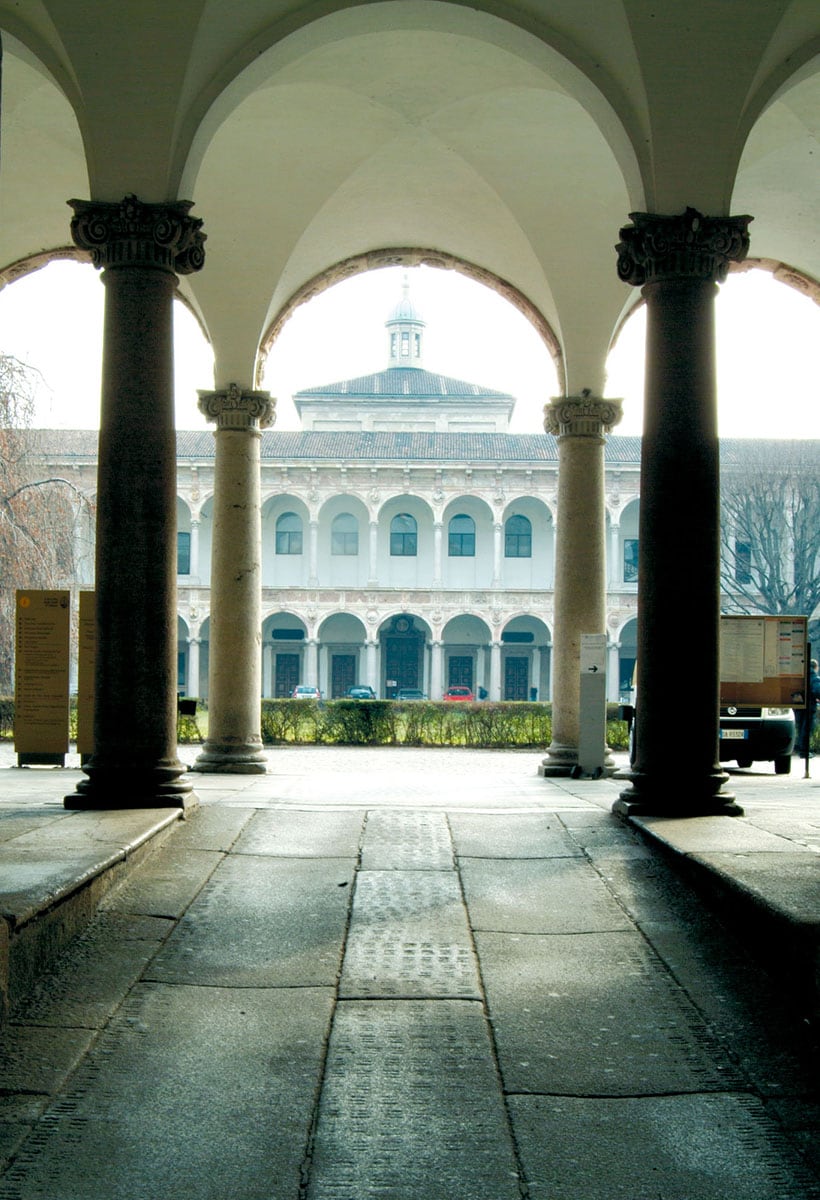 Founded in 1924, the Università degli Studi of Milan is one of the largest universities in Italy, and one of the youngest, though based on a merger of  institutions with over two centuries of history. It is the University of Northern Italy with the widest range of scientific-disciplinary sectors: 130 first and second level programs, 31 doctoral courses and 66 schools of specialization. There are about 63,000 registered students. It is one of the leading Italian universities for scientific productivity according to the rankings of Shanghai, Taiwan and Leiden, and the only Italian university to be part of LERU (League of European Research Universities).

The venerable Ospedale dei Poveri (Paupers’ Hospital), known as Ca’ Granda, now the headquarters of the State University, is one of the most important architectural complexes in Milan, in historical and artistic terms. Commissioned by Francesco Sforza as a health care facility for the poor, its construction began in the mid-1400s, based on a design by the Tuscan architect Antonio Averlino, known as Filarete (1400-1469).

The project, which Filarete descrbes in his Treatise on Architecture, called for the construction of two quads separated by a large central courtyard, bordered by two-story porticoes on four sides. Two-story porticoes were also made in the four smaller courtyards into which each quad was subdivided.

The project of the complex (43,000 m2 of space) was done in phases, relying on bequests and donations, but above all on the popular contribution of a special Jubilee known as the “Festa del Perdono” celebrated on 25 March of each oddnumbered year.

The first phase of the construction, supervised by Filarete (the ground floor) until his death in 1469, continued under the supervision of the Milanese architect Guiniforte Solari (second floor) and then with Giovanni Antonio Amadeo.

The second phase of the work began in 1624. The construction of the central courtyard based on Filarete’s design was completed by Giovanni Battista Pessina, immediately joined by  Francesco Maria Richini, Fabio Mangone and Giovanni Battista Crespi.

The Baroque facade and the church of the Annunciata were then built. Richini repeated, on the facade along Via Festa del Perdono, the double lancet windows, placing stone decorations made by Giovanni Antonio Amadeo in the interiors, belonging to the wing of the portico demolished to create the new large courtyard.

The third phase, covering the period from 1797 to 1804, included the construction  of the three courtyards inside the second quad and the completion of the vast facade towards the left.

In 1939 the health care functions were shifted to the pavilions of the Policlinico and the Niguarda Hospital, and the Ca’ Granda became the location of the Rectorate of the State University. The left wing (end of the 1700s) has a neoclassical design. The facade (283 meters) is divided into three volumes that lead to the two lateral quads and the court of honor placed in between.  The central courtyard is crowned by a quadriporticus topped by a loggia.

The present condition is the result of the extensive restoration work that began in 1953, based on a project by the architects Piero Portaluppi and Liliana Grassi.