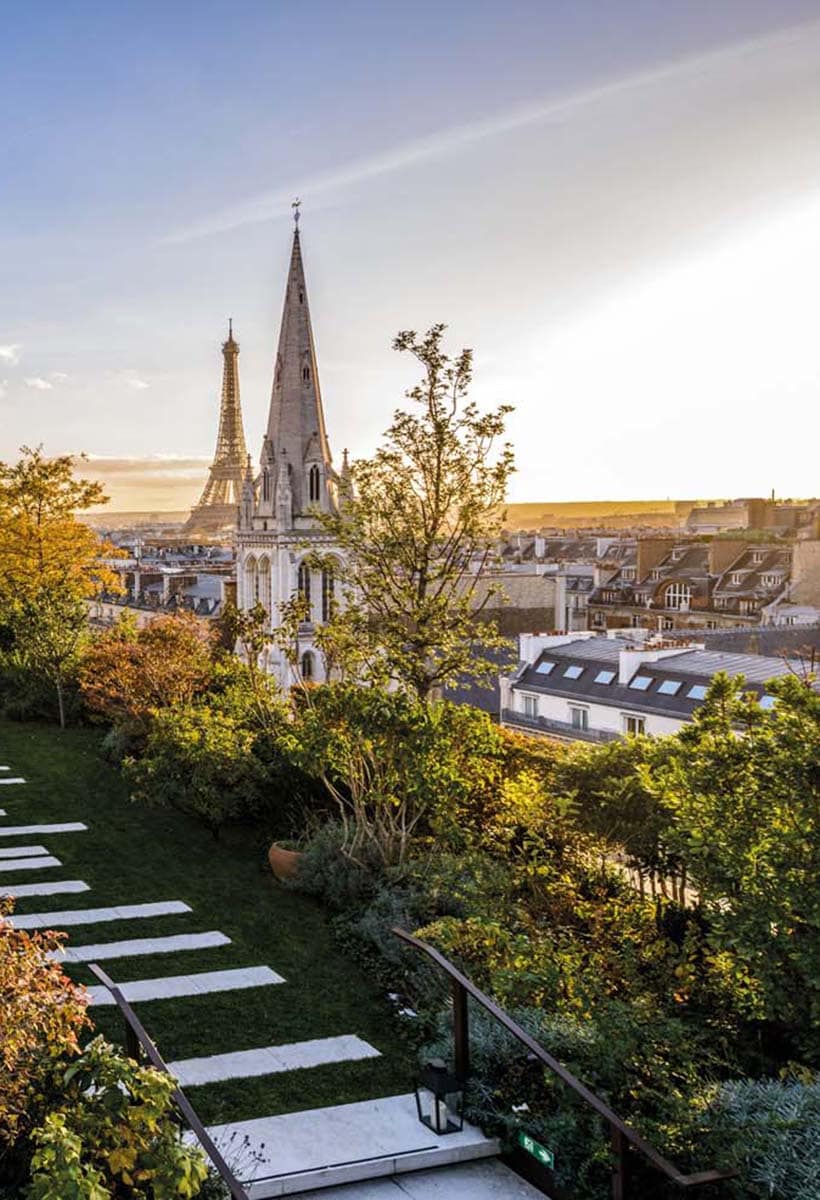 Bulgari Hotel in Paris: a story

Bulgari Hotel in Paris: a story

Architect Patricia Viel and Bulgari's Hotels & Resorts artistic director, Silvio Ursini, on the birth of a hotel that blends the energy of the Italian dolce vita with the glamorous atmospheres of the Ville Lumière

The first piece in the collection was made in Milan in 2004. It was the pilot hotel. Then the creative synergies between the Roman maison with the snake symbol and the Milan-based studio Antonio Citterio Patricia Viel traveled elsewhere: Bali (2006), London (2012), Beijing and Dubai (2017), Shanghai (2018). Paris, the latest entry, was opened in December. We talked about it with Silvio Ursini, executive vice-president of Gruppo Bulgari, in charge of the Bulgari Hotels & Resorts project, and Antonio Citterio & Patricia Viel, the designers of all the group’s hotels around the world. In this case, the renovation and conversion of the building has been handled by the French firm Valode&Pistre. 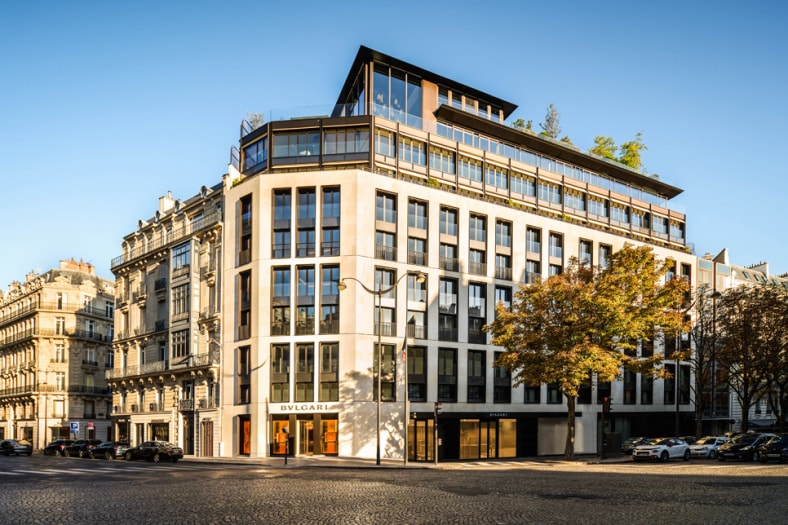 View of the particular corner exposure of the Bulgari Hotel Paris on Avenue George V, in the heart of the Golden Triangle of the capital. The Milanese architecture firm ACPV Antonio Citterio Patricia Viel has collaborated with the French studio Valode & Pistre on the renovation of the façade, with facings in golden limestone and large floor-to-ceiling windows.

From your respective viewpoints, what is the prospect you wanted to emphasize with this new hotel in the Ville Lumière?

Silvio Ursini: We wanted to create an experience of Paris that would be different from the usual clichés, playing with contemporary style and intimacy.

Patricia Viel: To combine the Italian Dolce Vita with the Parisian lifestyle. The Roman identity of the brand is conveyed by the warm tones of the hotel, which from its top offers a peerless 360-degree view of Paris, a distinctive feature of the project. We have emphasized relaxation and the joy of living, developing cozy spaces, almost like a hotel particulier or a boudoir, with lowered ceilings and intimate atmospheres. The fullest demonstration of Bulgari’s interpretation of luxury happens in the penthouse: 400 square meters inside, 600 outside on two levels, for a remarkable view of the city.

The Executive Suite Terrasse with a large loggia facing the courtyard. Furnishings by Flexform, B&B Italia and Maxalto (like the Pathos table and the Febo chairs, designed by Antonio Citterio), lights by Flos (the Kelvin LED lamp by Antonio Citterio and Toan Nguyen), FontanaArte and Viabizzuno. The fabrics of the curtains and sofa are by Dedar. All the private and shared internal spaces have been designed by the studio ACPV with the idea of conveying an experience of Italian lifestyle in harmony with local history and tradition.

What characteristics of the site stimulated the choices of investment?

S.U.: The location at 30 Avenue George V represents the best of what the Parisian market has to offer. The dual exposure, with the Avenue on one side and a small private courtyard on the other, made it possible to create two types of suites, with large floor-to-ceiling windows on the Avenue, or with large loggias that overlook the courtyard. This is a unique experience of Paris. 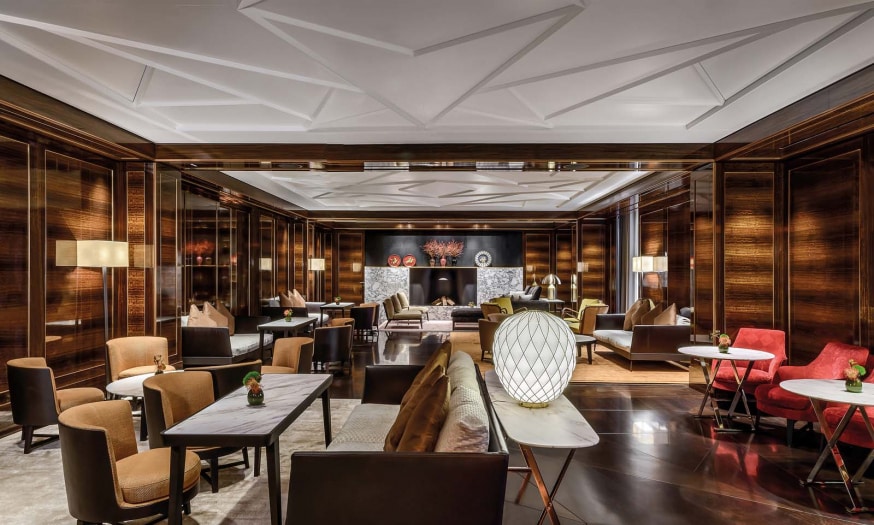 The lounge area. Its glamorous, intimate and vibrant atmosphere is emphasized by the low ceilings with a diamond pattern, inspired by Portaluppi, along with the clear geometric lines and warm tones of the islands, in open but cozy configurations. The setting combines fine Parisian craftsmanship with Italian design furnishings, produced by Flexform (like the Feel Good chairs), B&B Italia, Maxalto (the Pathos tables and Leukon floor lamps), all designed by Antonio Citterio. In the foreground, the Pinecone lamp designed by Paola Navone for FontanaArte. Carpets by Altai. On the wall of the fireplace, plates by Gio Ponti, from Richard Ginori.

What were the sources of inspiration in the context, from a design standpoint?

P.V.: The position in the Golden Triangle, the epitome of Haussmann’s geometric vision of the Grands Boulevards, the obsessive monochrome order of the stone, the orderly rows of trees and the extension of the city with its large hotels; while towards the Seine we can see the Art Deco perspectives of the Trocadéro. This dual situation of bourgeois elegance and bohemian invention has allowed the Bulgari Hotel Paris to take form, with its external lines reduced to the essential, expressing the dynamic energy of its vertical thrust. 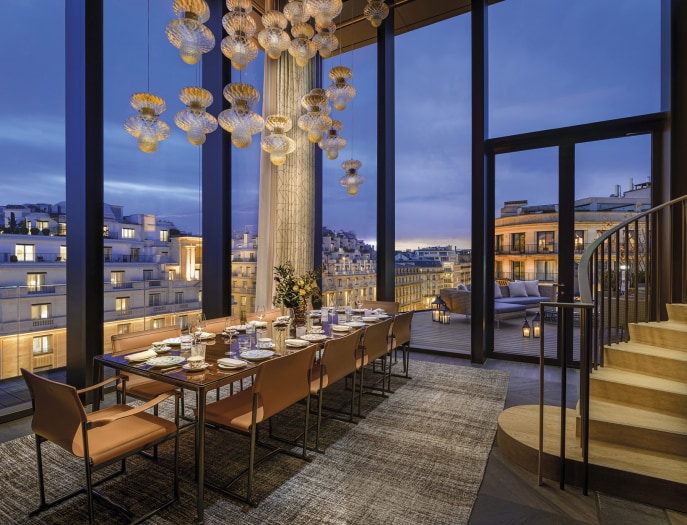 The dining room inside the Penthouse, the most exclusive unit of Bulgari Hotel Paris: 400 square meters inside, 600 for outdoor spaces on two levels. Table and chairs by B&B Italia (Mirto indoor collection), Spinn chandelier by Barovier&Toso in blown Murano glass, Altai carpet.

Apart from the environmental quality of the site, how did you organize the relationship with the existing context?

S.U.: The existing office building, which we could not demolish, left us with a magnificent corner exposure and large windows, which compensate for the ceilings which are not particularly high. On the basement levels we were able to reduce the parking zones, replacing some with a very large spa (1300 square meters) and a 25-meter swimming pool.

P.V.: I would start by saying that we have redesigned the façade (together with the French firm Valode & Pistre), which dated back to the 1970s. It was totally incongruent with Haussmann’s urban fabric. We took inspiration from Parisian Art Deco of the 1930s and 1940s, in the buildings around the nearby Eiffel Tower: lots of golden limestone and bronze casements. As for the internal spaces – the bar, the restaurant of Niko Romito, the fitness club, the Vitality Pool, the nine spa treatment rooms and the Spa Suite of 65 square meters, the lounge, the 76 guestrooms, including 57 suites with high windows, terraces and fine views – they have been decorated with great attention to detail, thanks to the precious contribution of our project director Roberto Mariani: the mini-bars, for example, are hidden inside large steamer trunks of bygone days, the Nespresso makers are covered with leather, while original ceramic pieces by Gio Ponti for Richard Ginori have been incorporated as well-balanced punctuation. The large mosaic-clad spa is a reference to ancient Rome, accentuating the sparkle of the water with the well-gauged use of gold tiles. The second pool, with a waterfall gushing from the Bulgari logo, has the same fan decorations as the Baths of Caracalla.

The master bedroom inside the Penthouse, with large floor-to-ceiling windows, expands into the two outdoor levels of terraces and greenery (600 square meters), with marvelous 360-degree views of Paris and its most iconic monuments, including the Tour Eiffel. Custom bed and table, Febo chairs by Maxalto, designed by Antonio Citterio. Carpet by Altai. Drapes by Dedar.

Were any concessions made to local design, or were there other inspirations?

S.U.: Remaining in tune with the design approach set by Antonio Citterio and Patricia Viel, the most important choice was that of combining Italian furnishings, seen in all the Bulgari Hotels, with finishing by outstanding Parisian artisans, including craquelé lacquer, the marqueterie de paille and parchment. The presence of art is concentrated in the splendid work Monica Vitti by Yan Pei Ming, taken from a photograph by Ugo Mulas from 1960, and in the photos by Irene Kung that show several Parisian monuments. We were also able to use not only the customary images of jewelry and the famous pieces in our archives, but also a specific selection of images that bear witness to the bond between Bulgari and Paris, for over one hundred years. 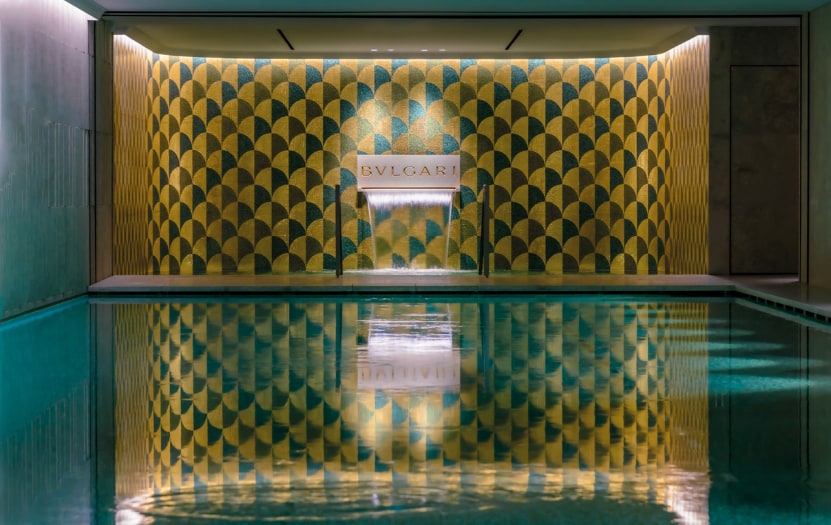 The Vitality Pool, clad in Bisazza mosaic, based on the fanned decorations of the Baths of Caracalla and fed by a blade of water that underlines the logo of the Bulgari maison.

P.V.: The balance of the façade clearly resembles the Bulgari Hotels in London, Milan and Beijing, but as in other cities, Bulgari also wanted to underline local identity. In Paris, this means ashlar work, typical of most of the high-profile monuments in the capital, from the Louvre to the Petit Palais and the Trocadéro. The choice of using stone cladding allows the building to fit elegantly into the stylistic continuum of the Golden Triangle, while at the same time asserting its own recognizable presence. The characteristic Parentesi motif inspired by the paving stones of the streets of Rome, utilized in the Bulgari jewelry collection of the same name, is like a carpet running along the façade, creating an initial invitation to enter this new experience, at the point where the glamour of Rome meets Parisian refinement. Though you can enter the hotel from the private access in the garage, guests who arrive from the Avenue are welcomed by two 8-pointed stars set into the floor, based on the famous fulcrum of Piazza del Campidoglio, replicated in the Bulgari store in Rome, on Via Condotti. These stars are in granite from Zimbabwe and Breccia Medicea marble, the favorite variety of the famous Florentine Medici family. 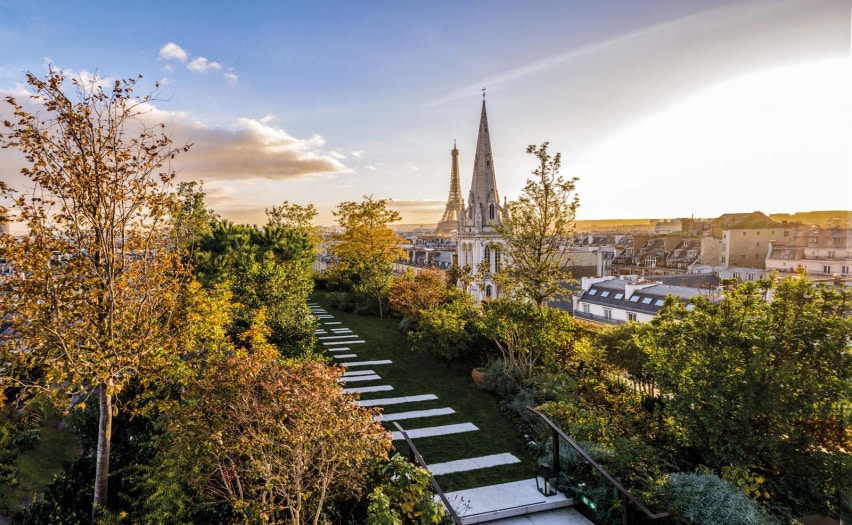 View over the rooftops of Paris.