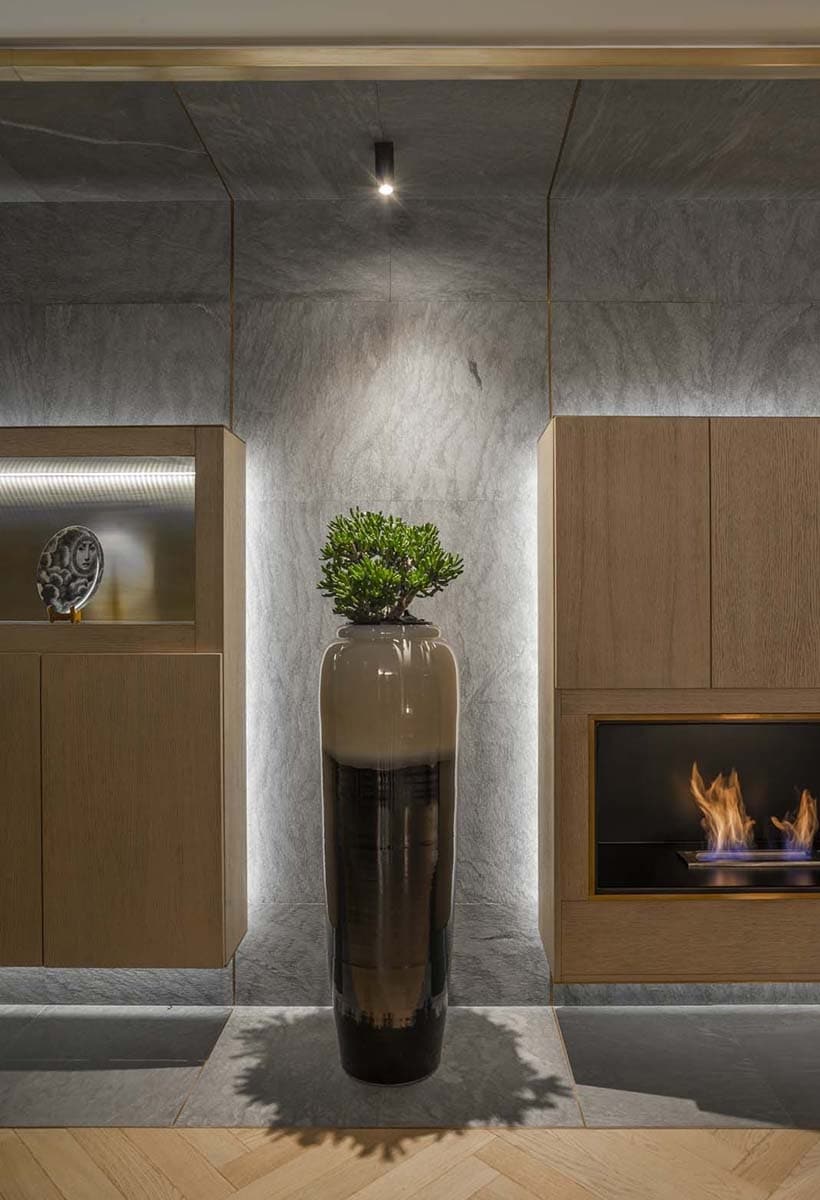 At the foot of Monte San Salvatore, this penthouse facing Lake Lugano is a place where nature enters the home as a protagonist of the interior design

Paradiso, a small town in Canton Ticino, Switzerland, on the lower slopes of Monte San Salvatore: a timeless place with a view of the Alps and the crystalline waters of Lake Lugano. This is the location of a penthouse apartment of 150 square meters, with 25 sqm of terrace, refurbished by the architect Pietro Corcione in collaboration with Manuel Tenca (The Great Living Estate) inside a recently built six-story structure. The form of the lot called for a layout with a long corridor, which might have seemed like a constraint, but in this case has been utilized as a strategic factor. 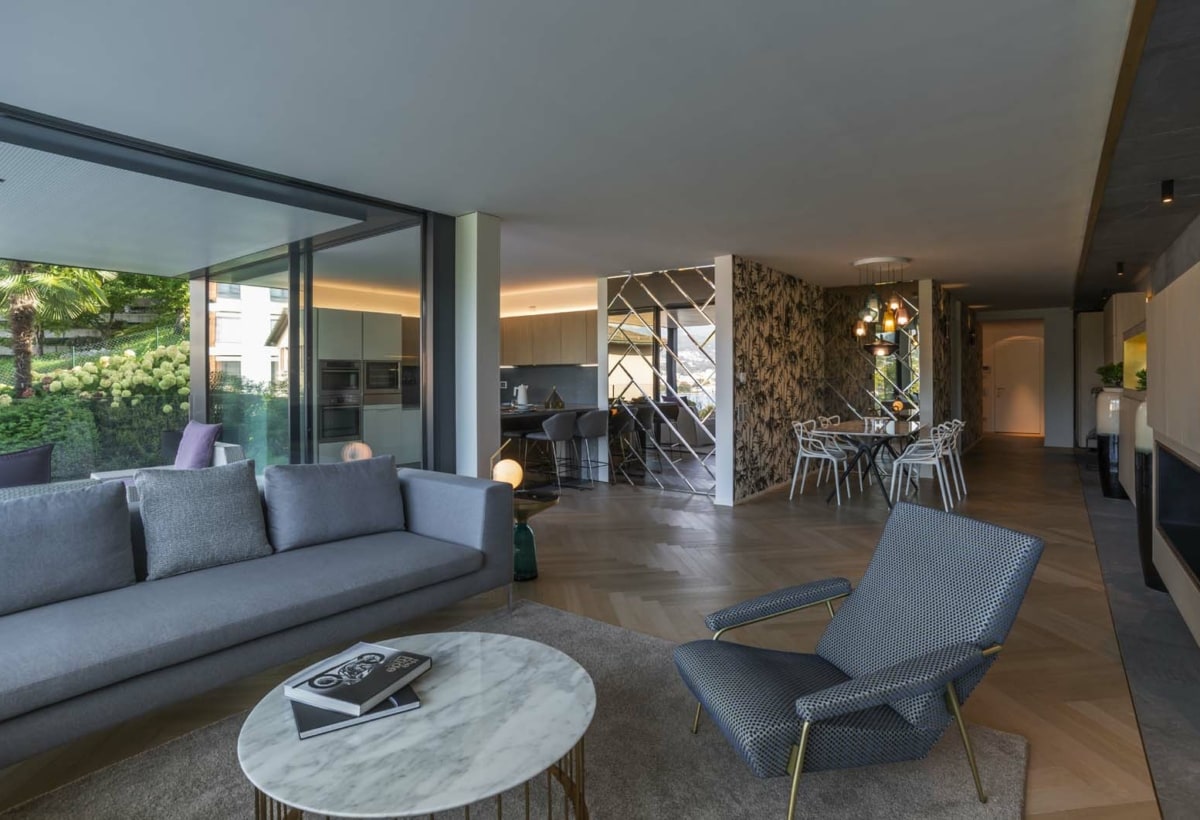 4
Seen from the living area, the corridor with the oak volumes made by The Great Living Estate.

“This particular feature of the layout was a real challenge for us,” Corcione says. “The solution was to create a logical system of functions, crossing the house from the entrance and establishing a dialogue of the various zones.” The wall of the 15-meter corridor has become a theatrical wing from which five volumes protrude, clad in oak, each with its own sizing and function. At the entrance the first volume conceals a closet, after which the second – off center with respect to the fulcrum of the house – contains a handy workstation. The third volume, organized as a credenza, supports the dining zone. The fourth block, between the living, dining and kitchen areas, contains an evocative bio-fireplace, while the fifth establishes a dialogue with the living area, framing a television set installed on the wall. These blocks, detached from the floor and ceiling, seem to float in niches faced in Cardoso stone, with a rugged finish enhanced by the oblique light that emerges from the perimeter of the containers. Each volume is underlined by king-size pots, like sentinels, defining the passage through the various functions.

“
The landscape is the true protagonist of the house, and the décor elegantly takes part with its neutral tones and fine natural materials."

“The volumes are detached from the floor and ceiling, like light presences floating in space, elegantly marking the various zones of the house,” says Manuel Tenca, founder of The Great Living Estate, whose artisans have made the structure and finishing of the apartment. The fulcrum of the penthouse is the large living area with full-height windows facing the surrounding panorama and leading to the terrace, in an indoor-outdoor dialogue that allows natural light to enter. “Thanks to this opening, the interiors extend outward, gathering light that flows freely, reflecting on the surfaces of the blocks installed with the same herringbone pattern as the floor, for a sense of greater spaciousness,” the architect Pietro Corcione, also responsible for the interior design, explains. “The landscape is the true protagonist of the house, and the décor elegantly takes part with its neutral tones and fine natural materials.” 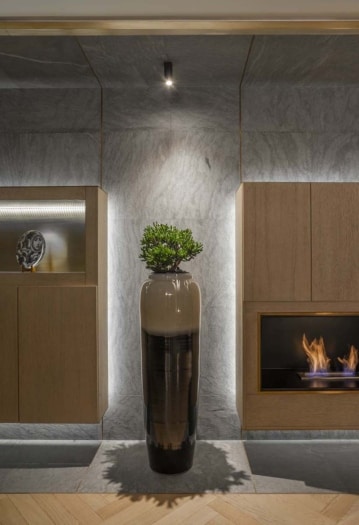 One of the king-size pots that set the pace of the oak volumes.

The selected furniture, with clean forms, enlivens the settings with discretion, juxtaposed with artistic inventions, such as the walls covered in floral paper that add character to the rooms. These include the wallpaper that forms a backdrop for the dining table, with a top in Calacatta Oro marble, below a chandelier made with pieces of multicolored glass. In the living area the linear sofa is joined by a chair designed by Gio Ponti, covered with delicate Punteggiato fabric by Rubelli. Chromatic accents are supplied by the complements, like the table by Sebastian Herkner next to the conversation zone, which echoes the hues of the lake in its base, accentuating the interior-exterior relationship.

“
The solution was to create a logical system of functions, crossing the house from the entrance and establishing a dialogue of the various zones."

On the terrace the dominant tone is the pink of the seating, reflected in the windows and adding a delicate glow to the rooms. Small references and inventions that become details of style can also be seen in the bedroom zone: in the master bedroom, a large oak monolith, made to measure by The Great Living Estate, separates the bed from the wardrobe: a visual wing that subdivides the space without obstructing it, forming a backdrop for a desk accompanied by a chair covered in turquoise velvet. 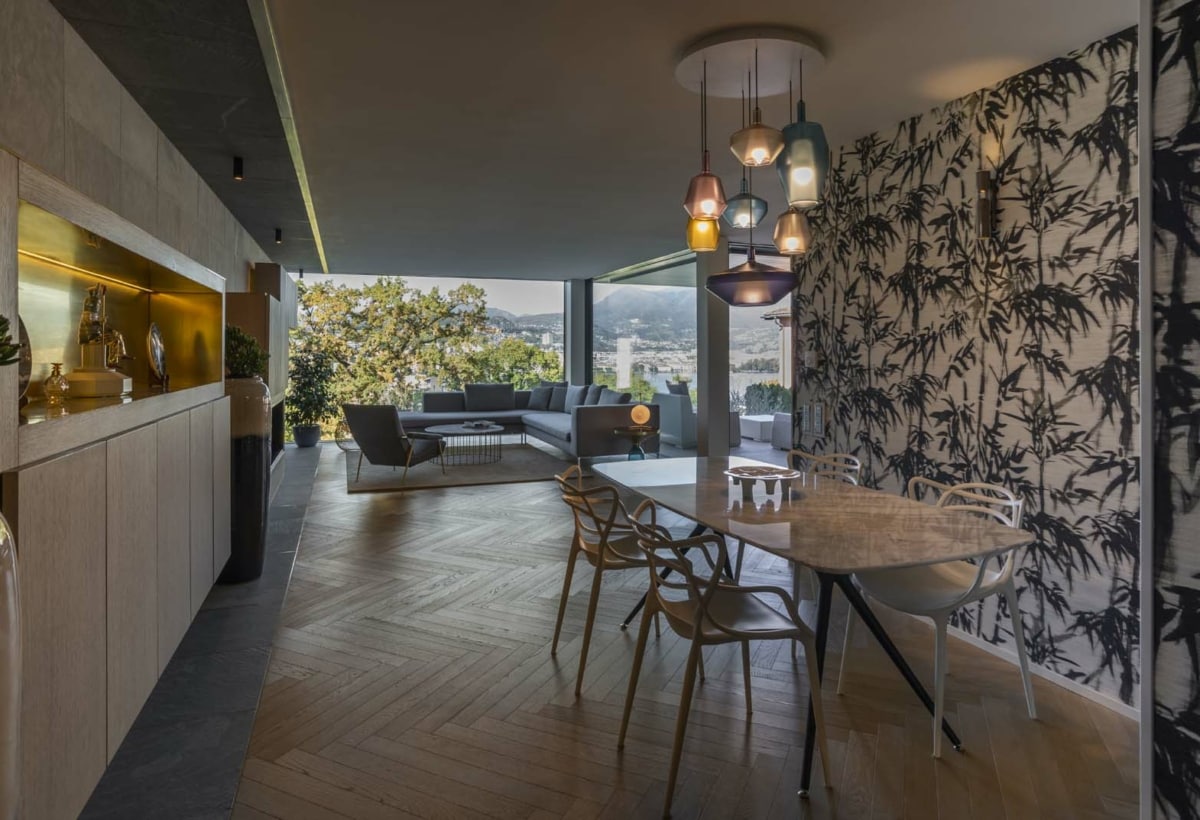 5
Wallpaper by Élitis also forms a backdrop in the dining room. Chandelier by Penta Light and Masters chairs by Philippe Starck for Kartell.

Finally, in the bathrooms elegance takes the form of sophisticated facings: Nero Marquina forms a contract with the Calacatta marble that entirely covers the shower stall and the washstand zone, assembled in an open book pattern. A delicate, precious thread links all the spaces: the gold finish of the structures of the complements and furnishings, and in the brass strips that run through all the rooms, separating walls from floors. Because, as Leonardo da Vinci said, “details make perfection, and perfection is not a detail.”

In Bali, the treehouse is XL

In Super Cannes, a villa without limits