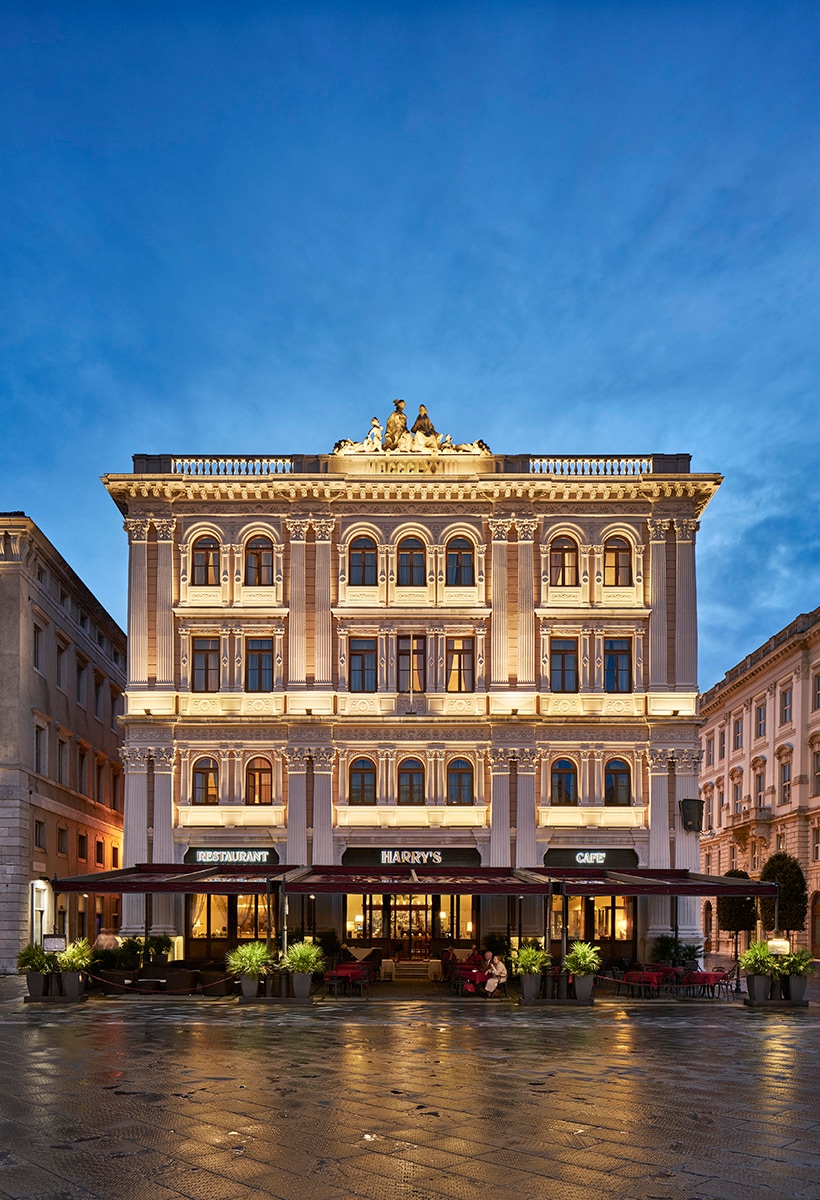 The sumptuous and “grumpy grace” of Trieste in a hotel

The sumptuous and “grumpy grace” of Trieste in a hotel

The imperial grandeur, austere at the same time fairytale - like Princess Sissi -, mixed with the traits - territorial and character - harsh and rough, forged by the gusts of the bora. Imbued with Central European literature, Trieste rises and leans towards the sea, amidst clear and majestic geometries, historic cafes, intricate alleys, dusty libraries and creaking bookstores. 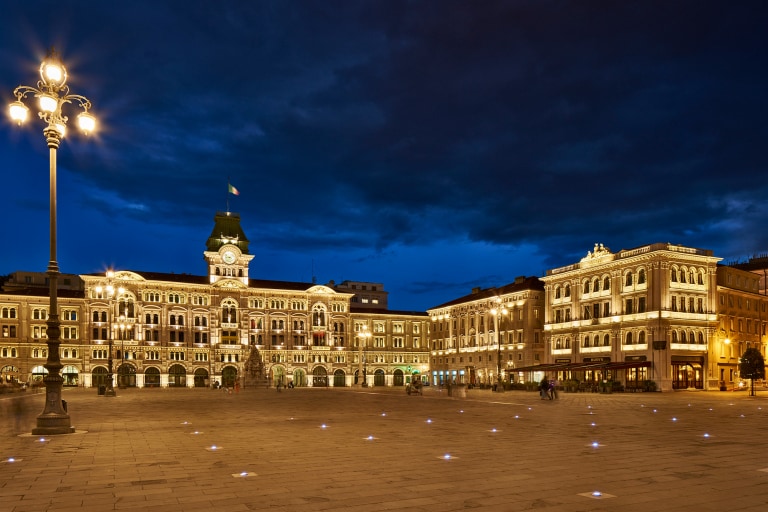 Erected in 1873, the Grand Hotel Duchi d'Aosta, has an ancient history that has its roots in the 1300 with the Hospitium Magnum. The current appearance, which is distinguished by the eclectic facade decorated with Corinthian pilasters and floral friezes, derives from the reconstruction project by the engineers Eugenio Geiringer and Giovanni Righetti .

The recent redevelopment of the hotel facades and interiors, including the spaces that house Harry's Bar and Harry's Piccolo Restaurant, is the result of an accurate historica/architectural study conducted by Egidio Panzera, founder of the homonymous studio Egidio Panzera Architect, which refreshed the classic context with precious materials and decorations reinterpreted in a respectful but dynamic contemporary key that gives lightness to the rooms.

Read also: the villa renovated by Egidio Panzera Architect in Portopiccolo, in the Gulf of Trieste 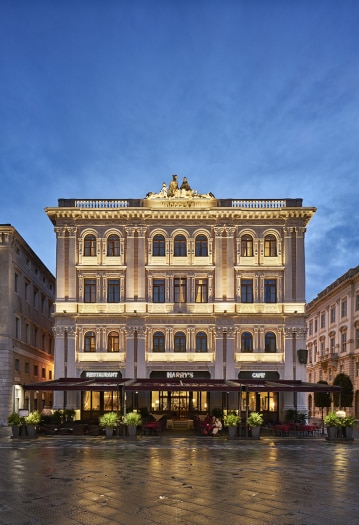 The souls and contrasts of Trieste

Trieste has many souls: Habsburg and wild, Nordic and Mediterranean, Italian and Balkan, opulent and angular, windy and rocky yet reassuring. Borderland, bridge between cultures. But it is the literary soul that dominates them all. “Trieste, perhap (...), is literature, it is its culture” writes Claudio Magris.

The position of absolute prestige of the Grand Hotel Duchi in the central - superb, shining, imperial - Piazza Unità d'Italia, the largest of Europe facing the sea, required a careful analysis of the context in many wait. 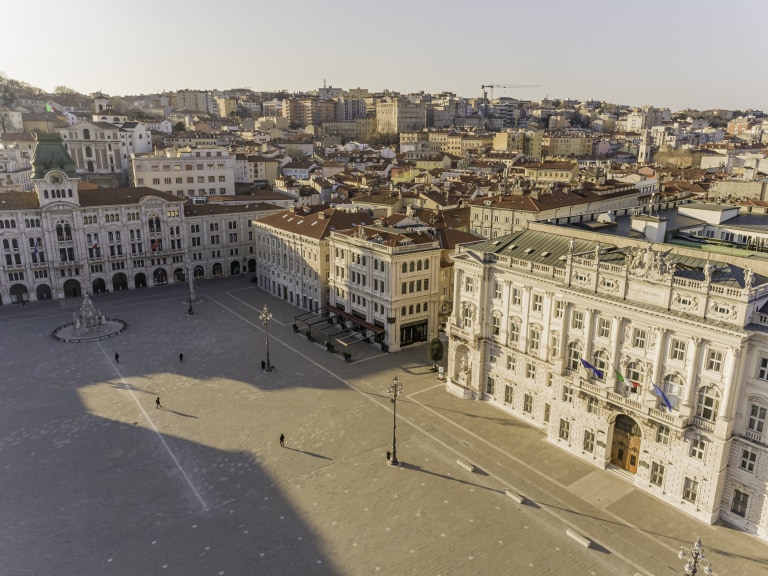 The complexity returned by the literature

Central European city, Trieste is born of diversity and contrasts. Positioned on the sea butprotected by the Karst plateau is a melting pot of peoples, languages, ethnic groups and religions that have been mixed for centuries. A complexity that has always fueled an intellectual and cognitive, scientific and psychoanalytic fervor, that the ’ has made a creative forge.

"Trieste has a grumpy grace . If you like, he is like a bitter and voracious bad boy, with blue eyes and hands too big to give a flower" writes Umberto Saba of his city, while Egon Schiele describes it by painting its reflection in the sea, that reflection that breaks the image, fragments it, mixes the colors on the canvas and restores the polyhedral multiplicity of the city.

And it is complexity and contrasts, sparkles and reflections that have inspired the calibrated and skilful renovation project of the Grand Hotel dei Duchi D’Aosta. 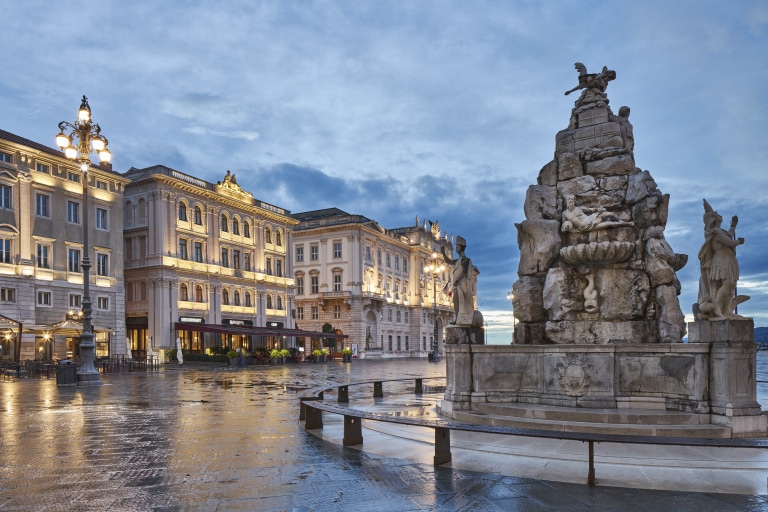 At the base of the Duchi's restyling project is the desire to maintain the hotel's heritage, reinterpreted, however, with contemporary nuances . Egidio Panzera wanted to emphasize the historical importance of the spaces through materials and chromatic shades that reinforce the identity of the place.

Properties of the Habsburg interiors, the green , the red and the blue are the colors that make up the palette of the new hall, while local materials , such as the marble Rosso Verona and Fior di Pesco Carnico, and artisan techniques ancient, such as the use of Venetian brocatelle stretches and the manual decorations of the wooden parts, characterize the common areas. 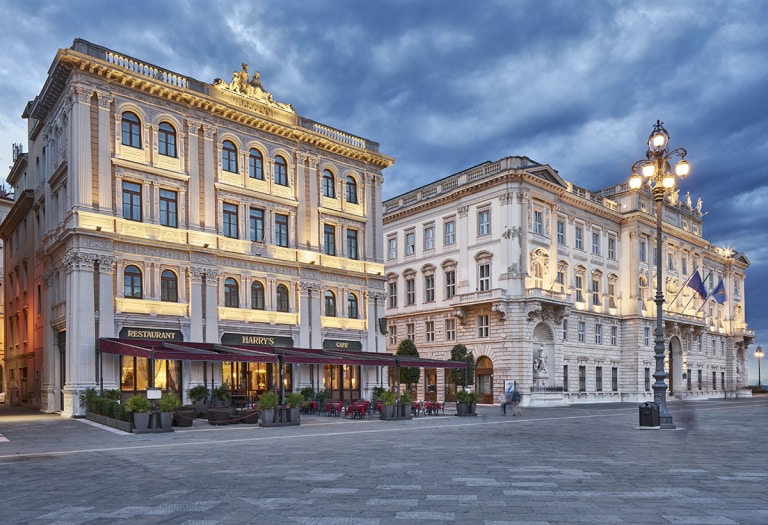 The theatrical entrance, open to the city

One of the objectives of the renovation project was to open the hotel to the city. Crossing the wooden doors of the original compass entrance, you are greeted by a theatrical space: a sumptuous chandelier by Barovier&Toso in Venetian crystal in aquamarine tones dominates the scene, while an iridescent carpet of G.T.Design recalls the ripple and the colors of the Trieste sea.

The hall, with perimeter columns covered with Rosso Verona inlaid marble like the pilasters on the facade of the building and the recovered walnut parquet embellished with brass joints, opens on two symmetrical scales; in the background stands a antique wooden counter, restored and brought back to its former glory thanks to a terracotta glass top with bronze reflections. 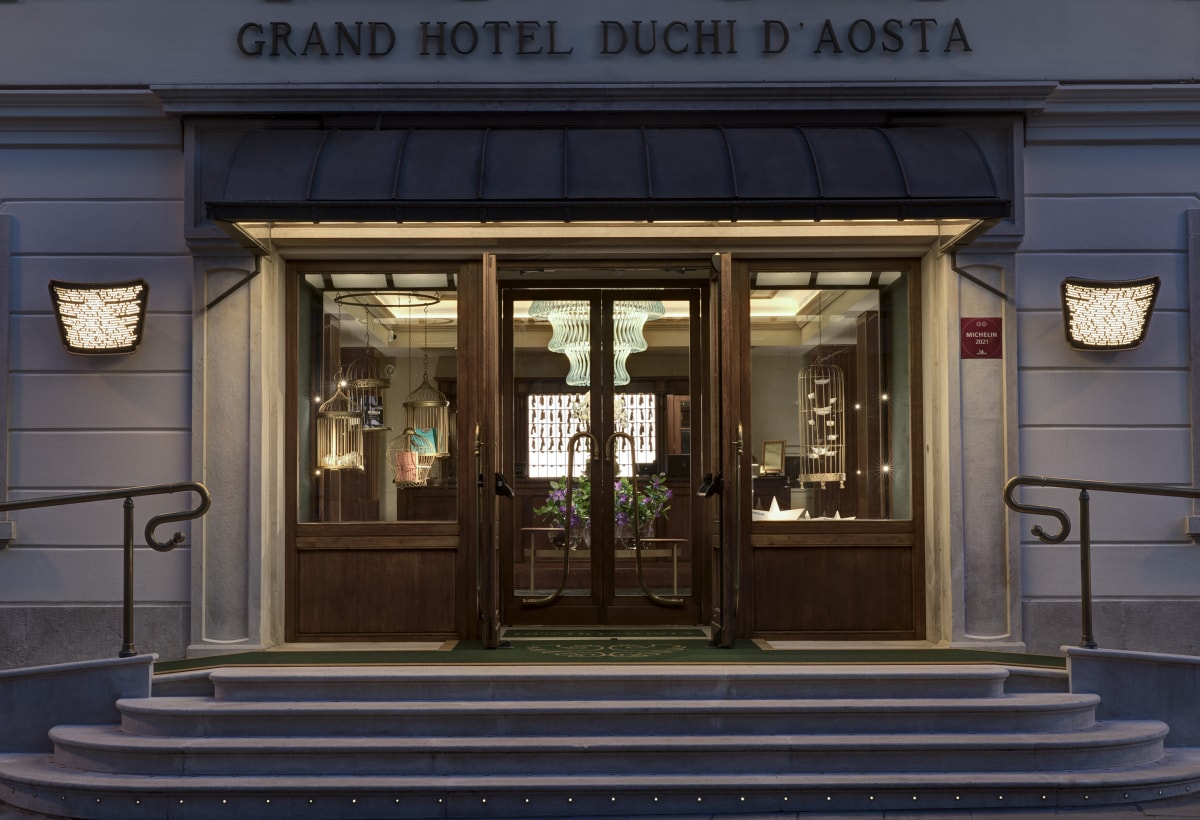 Particular attention was paid to the lighting project, curated by the lighting designer Bianca Tresoldi, which emphasizes the forms of architecture, the refinement of the materials and the intensity of the shades. As in the exclusive Svevo room, where a red brocatelle from the historic Venetian weaving Luigi Bevilacqua covers the walls and ceiling with a soft veil, embellishing the space. In the various rooms of the Grand Hotel, the bright atmosphere varies according to the time of day. 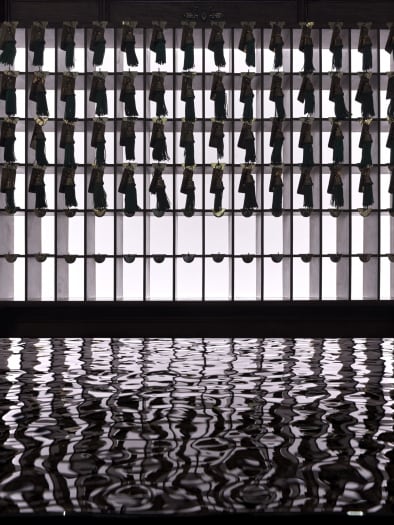 Harry's spaces: from the bar to the starred restaurant

The first spaces subject to intervention were those of the legendary Harry's Bar founded in Venice by Giuseppe Cipriani, which include bar, restaurant, bistro and pastry shop. The need was to rethink the rooms of Piccolo, the restaurant led by Matteo Metullio and Davide de Pra, to accommodate a greater number of seats and thus obtain the second star . The Egidio Panzera Architect studio has thus created a dynamic space: during the day Harry's Bar and restaurant are a unique environment, while in the evening the Harry's Piccolo is shielded to guarantee tranquility and privacy to diners.

The ballerina tables twirl in space

The Club dei Club, which from the living room is now incorporated into the Harry's Piccolo restaurant, is lined with the original moss green brocatelle made by Tessitura Luigi Bevilacqua which makes it sophisticated, intimate and muffled the room with a view of Piazza Unità d'Italia. Directly overlooking the sea, the majestic and regal square, dotted at night with small lights integrated into the pavement, seems to "float in its hieratic whiteness", writes Mauro Covacich.

On the other hand, the 'ballerina' tables designed by Egidio Panzera give a poetic lightness to the rooms of the restaurant: they stand out for their ethereal 'skirts' in transparent tulle which, thanks to a soft backlighting, seem to float in space, like dancers circling on a stage. 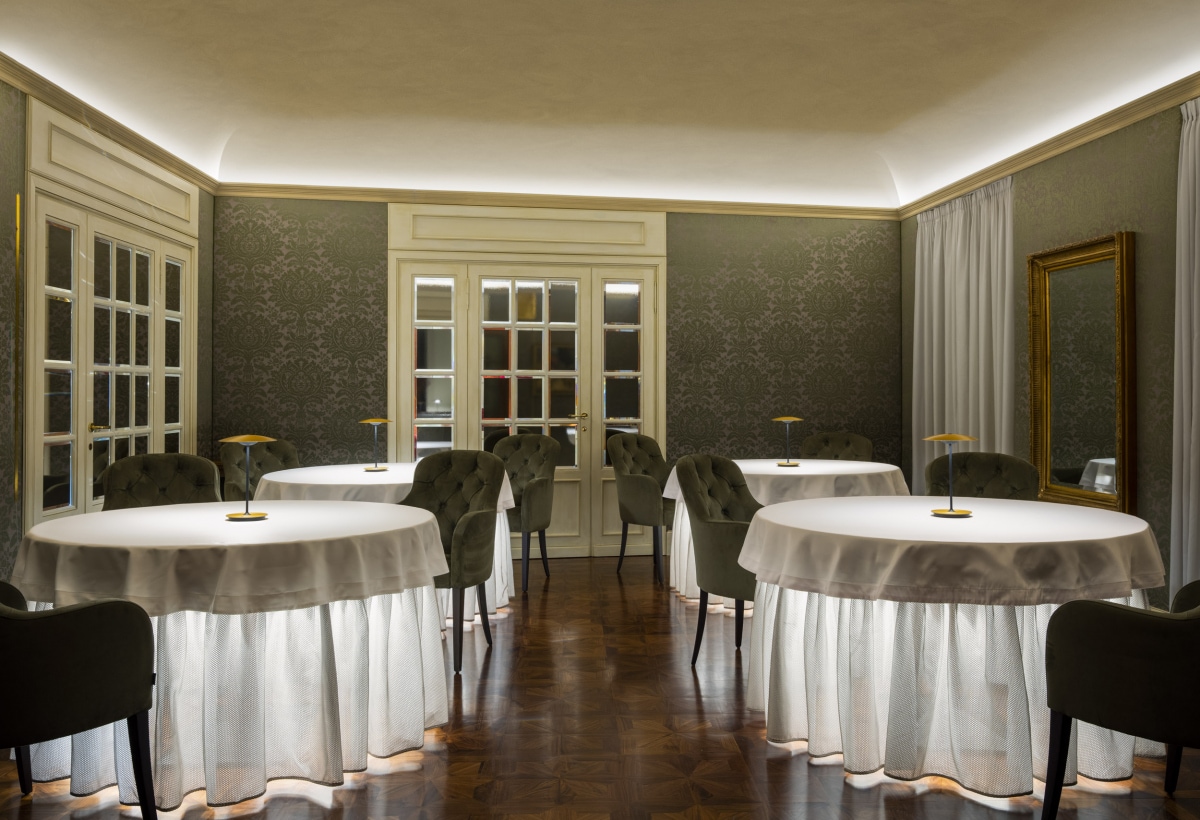 The dialogue between the glories of yesteryear and contemporary innovations is continuous. The imposing counter of Harry's Bar, among the various historical furnishings preserved, the architect Panzera has placed side by side two large brass glassware equipped with a special lighting system that makes the glasses sparkle on the shelves.

But the little jewel is the bathroom renewed in the intense and brilliant shades of sea green of Trieste. Here, a crumpled sheet metal ceiling creates the effect - surprising and alienating - of rippled waves on which the lights of the city are reflected. 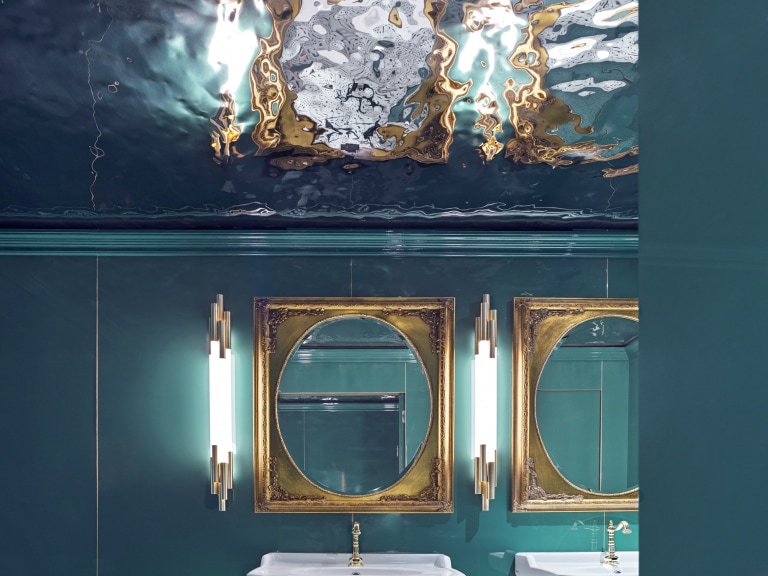 The stairwell of the building has been transformed into an unconventional art gallery: an exhibition itinerary that develops on the landings, enriched of stretches in satin, and around the elevators, covered in precious Fior di Pesco Carnico marble and with brass details. 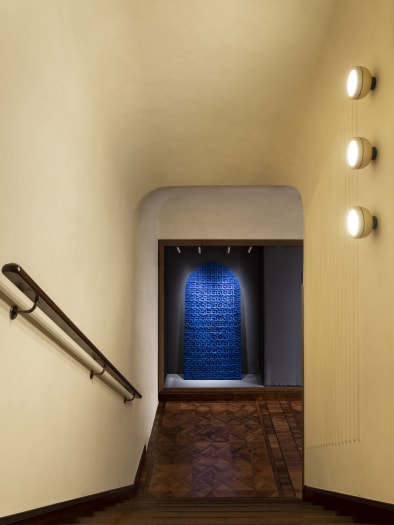 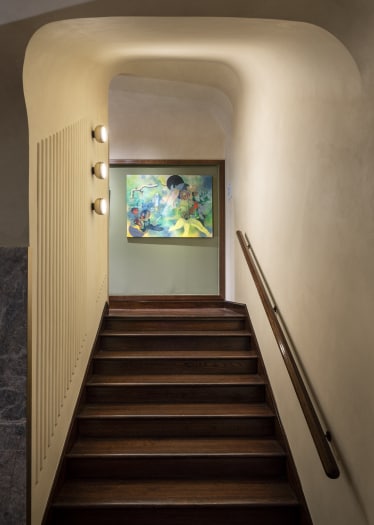 The two room concepts tell the complexity, contrast and reflection of Trieste

The project of the new rooms, divided into two concepts, was born to tell the elements - and the contrasts - that characterize the city of Trieste: complexity, contrast and reflection. In addition to the dynamic configurations of the furnishings that separate the areas of the rooms without the need for real partitions, the details, surfaces and decorations, some opulent but lightened by evanescent textures, soft lights or acid shades. 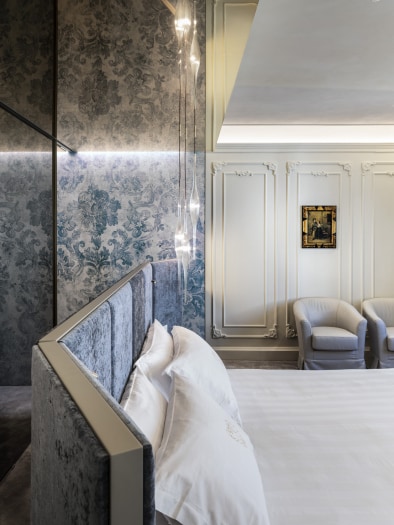 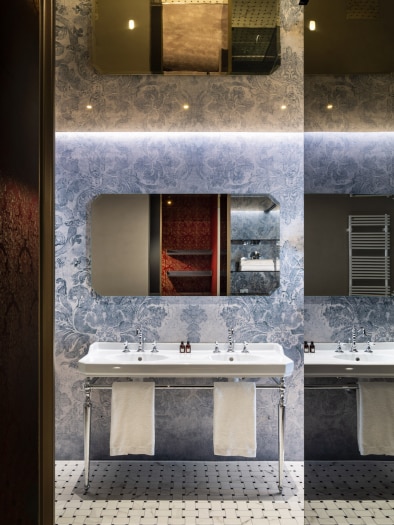 A casket dressed in noble materials

The first concept provides for the insertion of a contemporary casket inside each existing room. The volume, circumscribed by thin reflective surfaces, encloses the walk-in closet and bathroom. To dress it, noble fabrics, surfaces and materials such as the damask fabrics of Rubelli, the Inkiostro Bianco fiberglass wallpapers and floor mosaics. The walls of the bedroom are coordinated with the fabrics that cover the beds and upholstery and with the satin curtains Dedar. 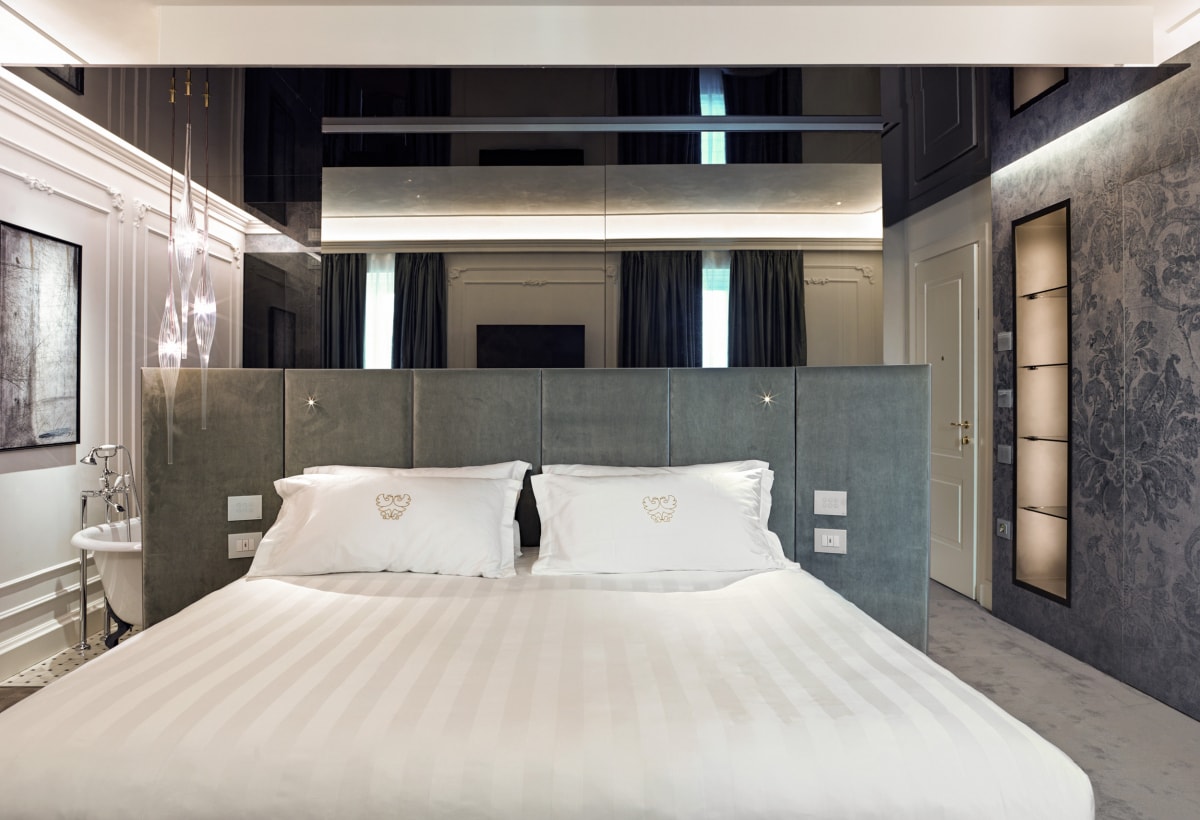 In the bedrooms, the light is designed in a surgical way, to compose three different light scenes, but not only. To underline the historicity of the place, indirect lighting of the marble ceilings, accent lighting on the paintings and luminous signs around the furnishings are provided, to which are added decorative pendants in transparent blown glass. 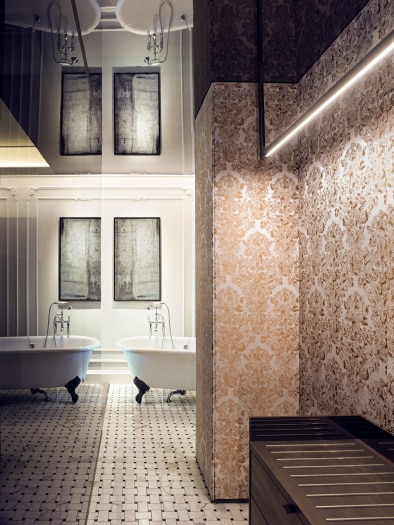 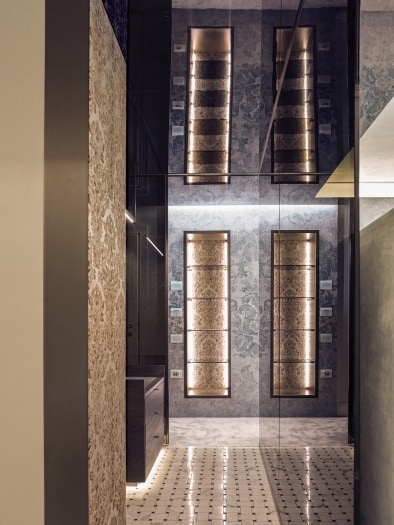 The complexity returned by a secret port

The second concept designed for the rooms interprets the complexity by creating a separate reception and service space - in contrast - from the ' sleeping area. A secret door , hidden between plaster frames , divides the two rooms. At the ' entrance, the contemporary space is defined by precious material surfaces: dark wood ceiling, Venetian floor, cementitious resins and - scenographic and iridescent - a wall made of special marbles: Fior di Pesco Carnico, Port Laurent and Palissandro. 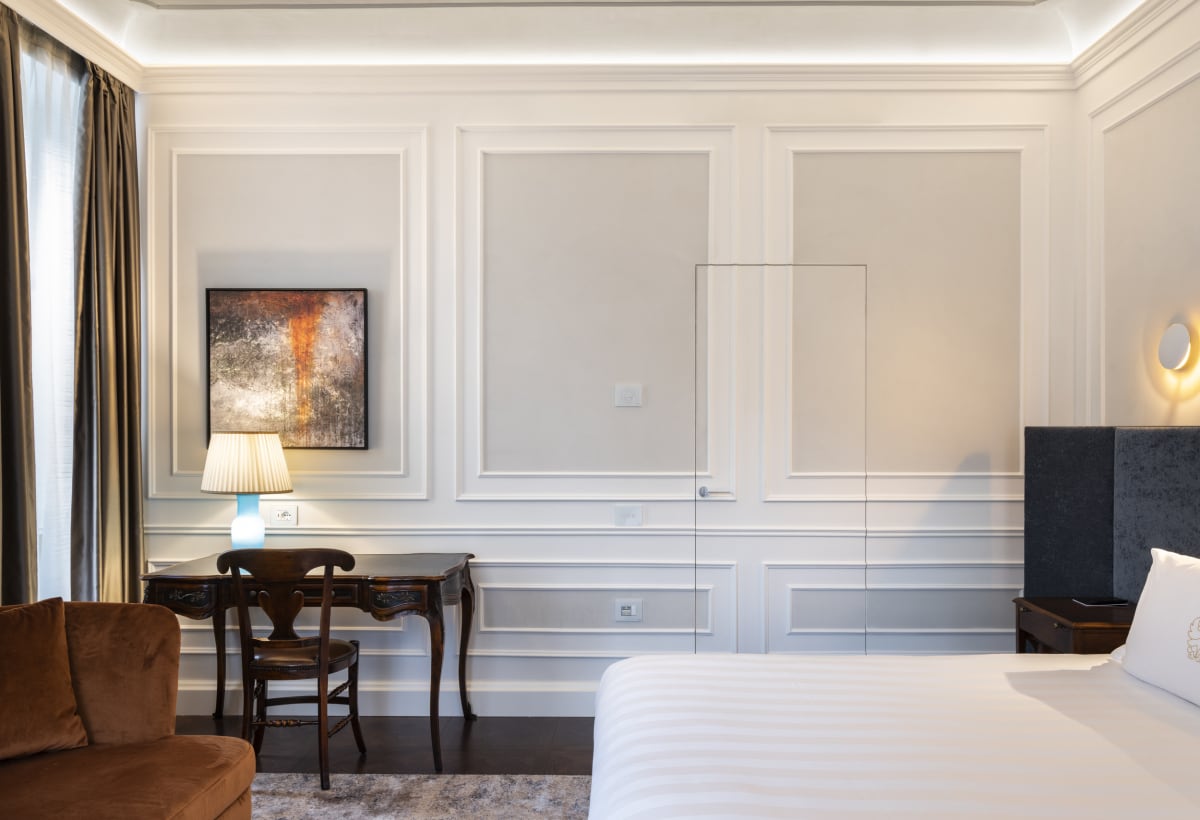 A diaphragm and a niche

A decorated acid-etched glass diaphragm divides the entrance-box area from the bathroom, while the walk-in closet, created in a niche, incorporates and emphasizes, in acid tones, the colors of the marble veins. Sophisticated solutions that from decorative become functional, to experience the bedroom in a comfortable and intimate way. 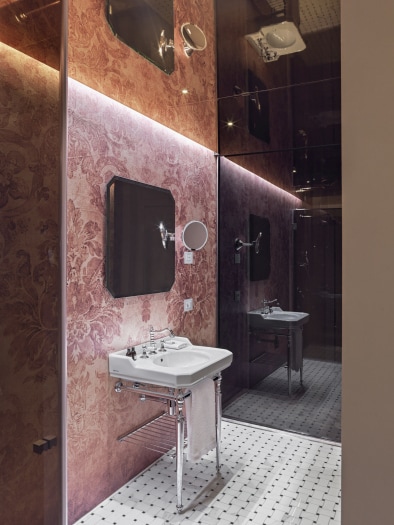 All the materials used in the room are reflected in the large round mirror, placed on the marble wall in correspondence with the sink. The sleeping area with classical tones is defined by the plaster frames that enclose walls in marmorino, by the precious restored antique furnishings and by two contemporary light points, punctual and at the same time sculptural, signed Catellani & Smith. The undisputed protagonist is the large padded headboard of the bed. Made to order, it is equipped with tilting wings that wrap, shield, protect: they divide without dividing. 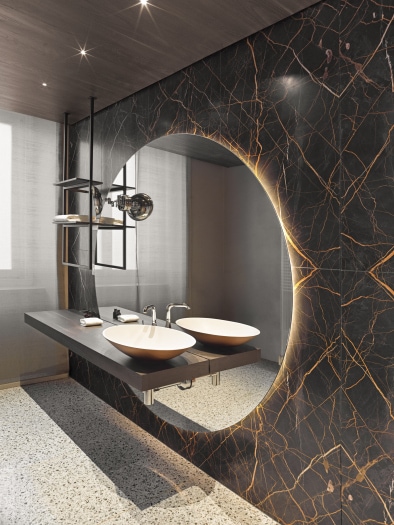 We leave the Grand Hotel Duchi D’Aosta surrounded by the charm of Trieste, the Habsburg one and the rough one, that of the historic cafes and ancient bookstores and that of the alleys and taverns. That of a granite land, where the bora blows impetuously, where the cliffs overlooking the sea are softened by Mediterranean smells and colors. A borderland, territorial and cultural. A land and a population full of history and contradictions, mixes and suggestions, literary and physical. Tangible.

"I go down towards Trieste along a Mediterranean and Nordic coast, like Trieste itself: rocky, windy, wild; with Mediterranean sparkles, muted but crazy colors; with raw lights, acute white, silver, lead" Guido Piovene.

"Trieste is a vertical jolt between the Karst and the sea, a free fall when the train comes out from the tunnels, a jolt after the boredom of the Po Valley if you get on the coastal road by car. Nothing is mediocre in Trieste, not the people, a Slavic mixture softened by Latin traits, to quote Bobi Bazlen; not the dialect which, by dint of contracting and translating, precipitates anything into an often foul-mouthed hyperrealism; not the appearance of white Vienna, austere and at times commoner" Cristina Battocletti.