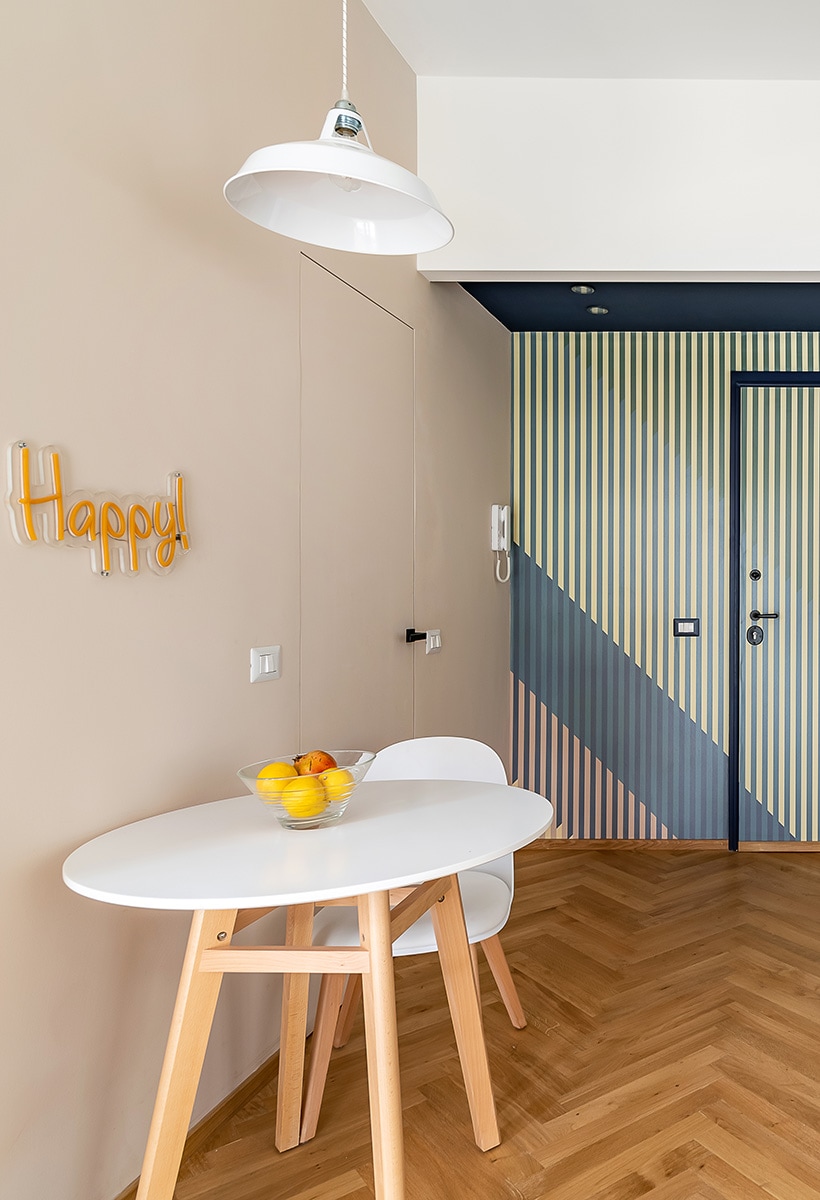 How to transform a small one-room apartment of just 40 m2 into a welcoming, colorful nest: Alessia Cavalli tells us about it and Francesca Smaldore, co-founders of the Caleidoscope Architecture studio

The renovated studio flat in Rome by Kaleidoscope Architecture studio is the emblem of how even a confined space and apparently devoid of alternatives can be converted into a welcoming home, in which the maximum optimization of space coexists with a tasty and slightly retro aesthetic, just as required from the property.

The reinterpretation work stems from the need of the young home owner, who wanted to experience the 40 square meter space in a way that is more similar and coherent with her domestic habits.

First of all, the studio apartment should have responded to the need for dynamism and completeness of use. 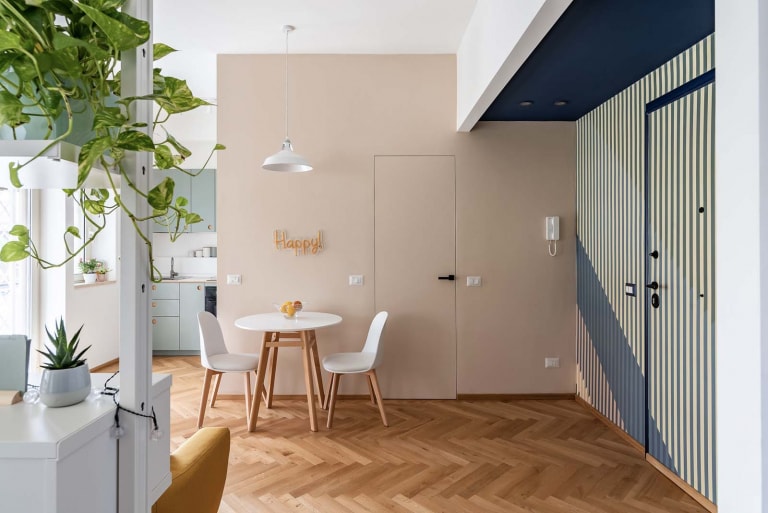 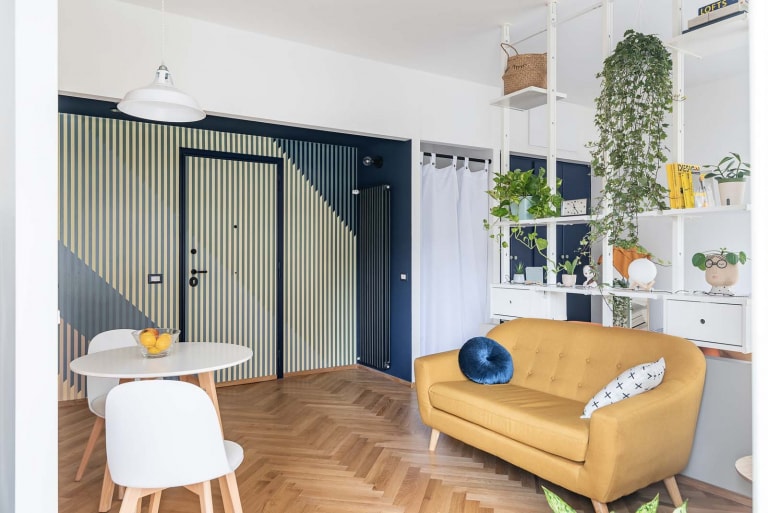 The graphic lines of the wallpaper and a long lowered ceiling strip, underline and they mask the entrance to the apartment and the wardrobe area, configuring themselves in a single fund scenic that accompanies the gaze from the living area to the sleeping area - Ph. Morena Valente

It is starting from here that the two architects Alessia Cavalli and Francesca Smaldore, co-founders of the Roman studio, reasoned: the apartment N.48, which originally appeared as a space organized into three rather small rooms, was transformed as a first step into a single, bright, open space of 40 m2.

A studio apartment in which, by means of architectural tricks and tools, the day and night areas coexist harmoniously in a pool of geometries and colour.

The wallpaper was also strategically used to mask the entrance and the wardrobe area, then oval windows were created which surround the height of the single room creating a visual connection with the pink protagonist of the bathroom; everything is aimed at enhancing the natural light already largely accentuated by the restyling, and at tracing a visual path that guides the eye throughout the apartment.

The 'thematic' micro-environments are always separated by objects placed in a strategic way - sometimes protagonists, others used as simple stage furnishings - like the pleasant full-height bookcase placed in the center of the room.

We asked the architects how they worked on the project. 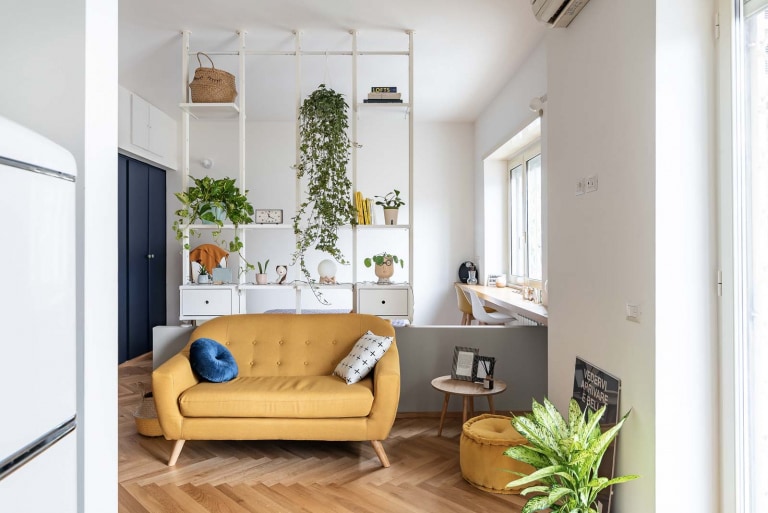 The two main areas of day and night are connected and divided by a series of architectural gestures: a full-height bookcase is the backdrop to the sofa and the headboard of the bed, a band of colored masonry directs the paths and identifies the passage point, a shelf custom made desk under the window puts the bed area in visual communication with the kitchen - Ph. Morena Valente

Renovating a studio apartment: where to start?

Small houses always represent a challenge, because in small spaces all the essential functions of living must concentrate harmoniously, without renouncing the aesthetic and perceptive aspect of the space.

The creation of a welcoming nest starts from the deep knowledge and continuous dialogue with those who will live in the house, from their daily experiences, needs and inspirations. In this case, this led to the creation of smaller areas within a single space, so that in each of them the owner recognizes herself and her habits.

These are areas obtained by subdividing the apartment through intangible limits suggested by the arrangement of the furnishings or by the use of different colors and surfaces, instead of the classic physical partitions. 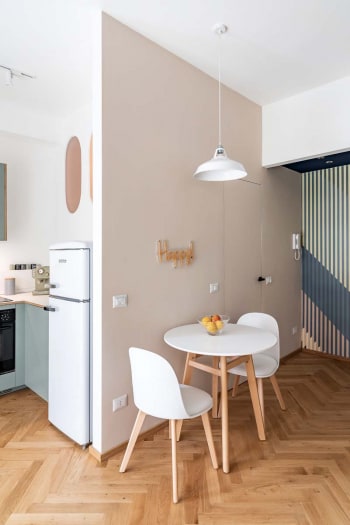 The large pink wall and the mint green kitchen, which are located on two staggered floors, create the second scenography of the living area - Ph. Morena Valente

The kitchen area occupies an appendix volume open to the living room in which two oval windows stand out that let light and color shine through - Ph. Morena Valente

What did you focus your attention on during the restructuring process?

Before our renovation, the house was divided into three transversal rooms of small dimensions, each of which had a single window, therefore the spaces were dark and the living area almost non-existent.

The first design operation concerned the complete elimination of the existing internal partitions and the creation of more technical volumes near the entrance in order to free up the main external wall of the apartment on which there are all the windows of the House.

Thanks to this operation it was possible to obtain a single free and bright space.

Illuminating the house with natural light was the first intention of the project, the second intention was to have a larger space than small rooms in order to enjoy all the available square footage and create a dynamic space thanks to a succession of points of view and scenographies obtained with the different treatment of the surfaces and the use of colors and materials. 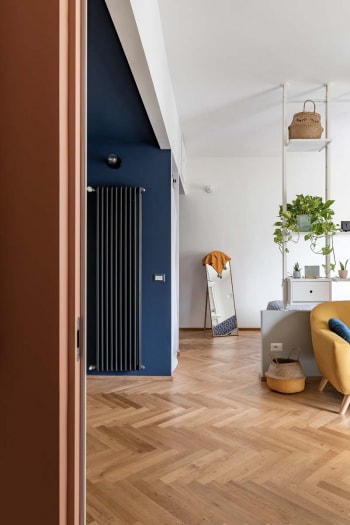 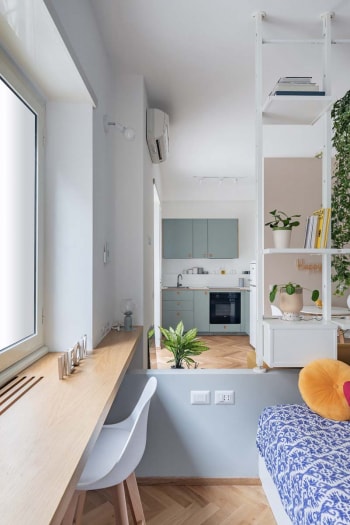 How much is due to color, in the identification of multiple areas within a single space?

Color played an essential role because it allowed us to create a game of backgrounds and foregrounds through the use of light and dark, gradations and tones.

In some cases, color characterizes and frames a single environment, in others it accompanies passages and paths, or, again, it transforms onto contiguous surfaces: color has the power to connect or isolate or separate on a perceptive level without touching the spatiality, but giving sensoriality to the environment.

How did you identify the color palette?

We studied the color palette starting first of all from the identification of the colors closest to the client, between combinations and temperatures closest to his taste and his soul, also searching among the palettes with a retro taste.

The colors of the kitchen and bathroom were then chosen, finally with the choice of the wallpaper, we looked for color gradations that could dialogue with each other, maintaining a harmony between tones and saturations.

The bathroom is designed as a house within a house. The soft pink of the wall outside the bathroom intensifies inside: it colors the walls and the ceiling, creeps between the surfaces of the tiles, dyes the sink and creates the details of the floor

The enveloping sensation of color is softened by the black details of the taps and accessories as well as the vertical geometries of the coverings - Ph. Morena Valente

For maximum customization of spaces: how important is working with the property to you?

Knowing the needs and desires of the client is the cornerstone of our work.

The interior design always starts from careful and profound listening to the requests and inspirations of those who will live in the house and develops through a continuous dialogue in all phases of the design.

From the choice of the planimetric configuration, to the volumetric articulation, up to the choice of materials, colors, identification of the furnishings and lighting, all without losing sight of the budget, the involvement of the owner was essential to create spaces tailored to fit your personality.

Thus was born a space that is a score of actions, emotions, relationships in which to find yourself inside the house. 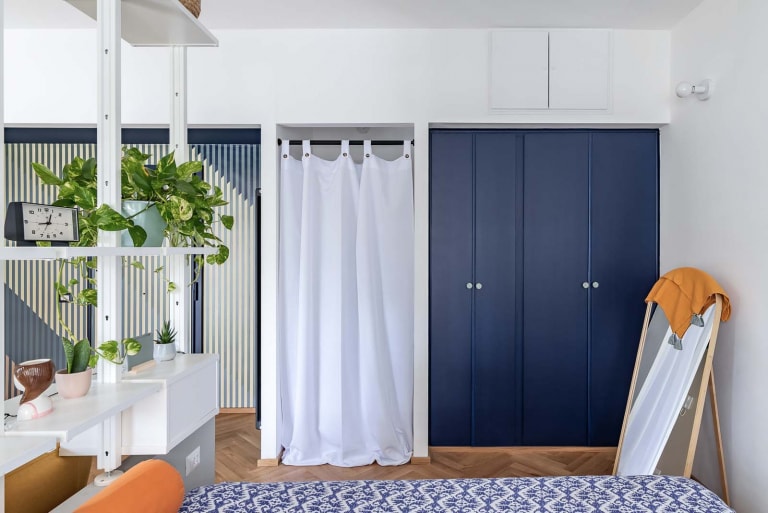 A residence that blends Indian architectural style and Mid-Century spirit

In Milan, the contemporary version of a 1950s apartment

A radical exercise in horizontality with Casone Group