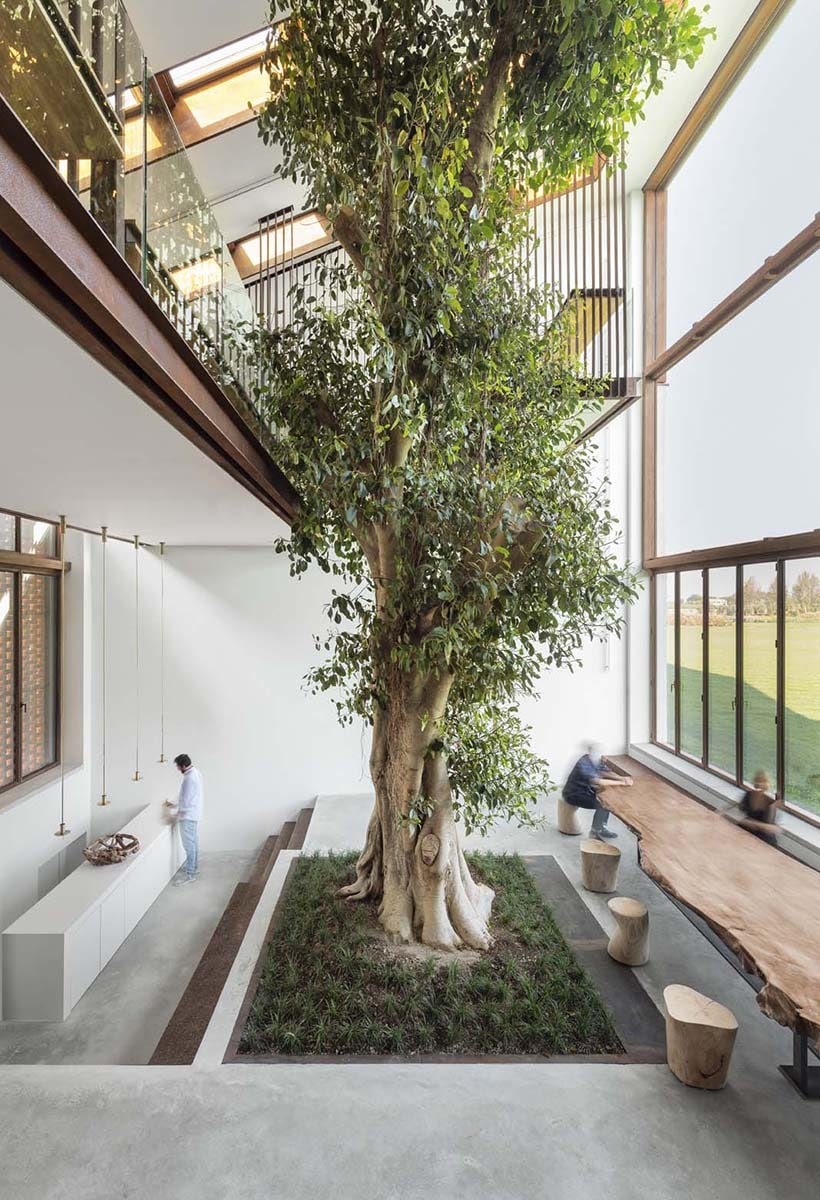 In Parma, the house built around a tree

In Parma, the house built around a tree

Natural and Artificial meet around a 10 meter high Ficus, in the greenhouse house of the entrepreneur Francesco Mutti in the Parma countryside

Can planting a tree change your life? Definitely. Even more so, if the tree in question is a specimen 10 meters high standing at the center of your living room, inside a space specially designed and built for the plant’s wellbeing and your own. Meeting Alma in India, a marvelous 50-year-old Ficus tree (not the ‘sacred’ variety), symbol in oriental cultures of welcome, gratitude and respect, a bridge between heaven and earth, Yin and Yang, meant all this for Francesco Mutti, at the helm of Mutti Spa since 1994, a company known all over the world: a way of writing a new story that makes the love of the absolute beauty of nature its true focus, as a synonym of authenticity, the bounty of the earth and its products, the variety and richness of its artifacts. Francesco Mutti brought Alma, with the tree’s extensive system of roots, to pass the winter in Alicante, adjusting to a new continent. He then made the tree into the pivot around which to organize his new greenhouse-home at Montechiarugolo, in the province of Parma, a place that since 1899 has corresponded on the map to the address of the Mutti company. 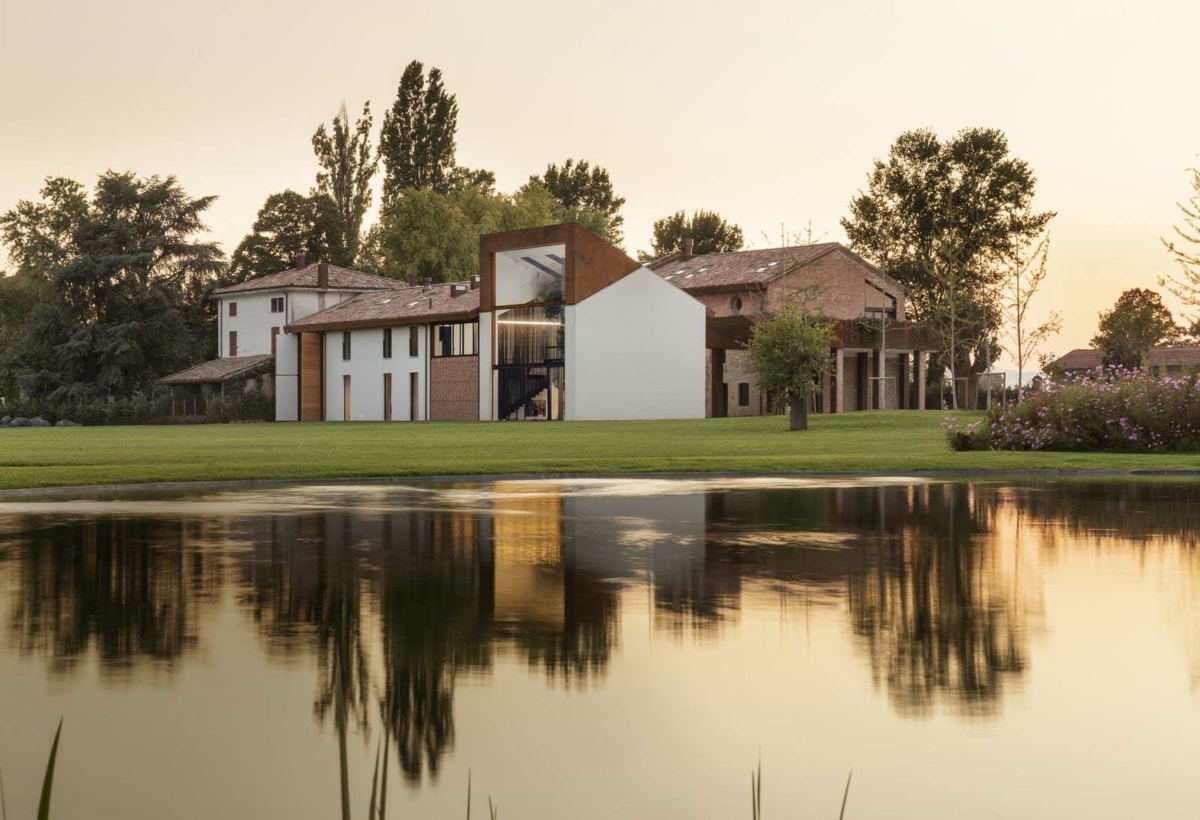 3
View of the greenhouse-home from the zone of the phyto-purification pool of lake water, part of the landscape designed by Paolo Pejrone. Production: Arcadia Vivai Impianti. Biolake: Umoracqueo. Note the triangular form of the elevated roof that demonstrates the mutation of the original volume. The two main wings of the complex face each other around the classic courtyard. One contains the living spaces, the other the offices; their ideal connection is represented by the portico of the former barn, which becomes inhabitable, also on the roof, and is ‘dressed’ in a cloud of greenery bordered by Cor-ten.

The entrepreneur called on Carlo Ratti and Italo Rota, designers of the Italian pavilion at Expo 2020 Dubai (together with Matteo Gatto and F&M Ingegneria), to create this first tile in a more complex wellness mosaic that explores the concept of the factory-landscape, in and out of the frame, on the familiar expanse of pre-Apennine plains. “For me, Alma represents the idea of a dwelling in which I feel very much at ease, a place that combines extreme simplicity, a strong sense of the natural, and a beautiful balance between my roots and what I would like to project into the future,” Mutti says. 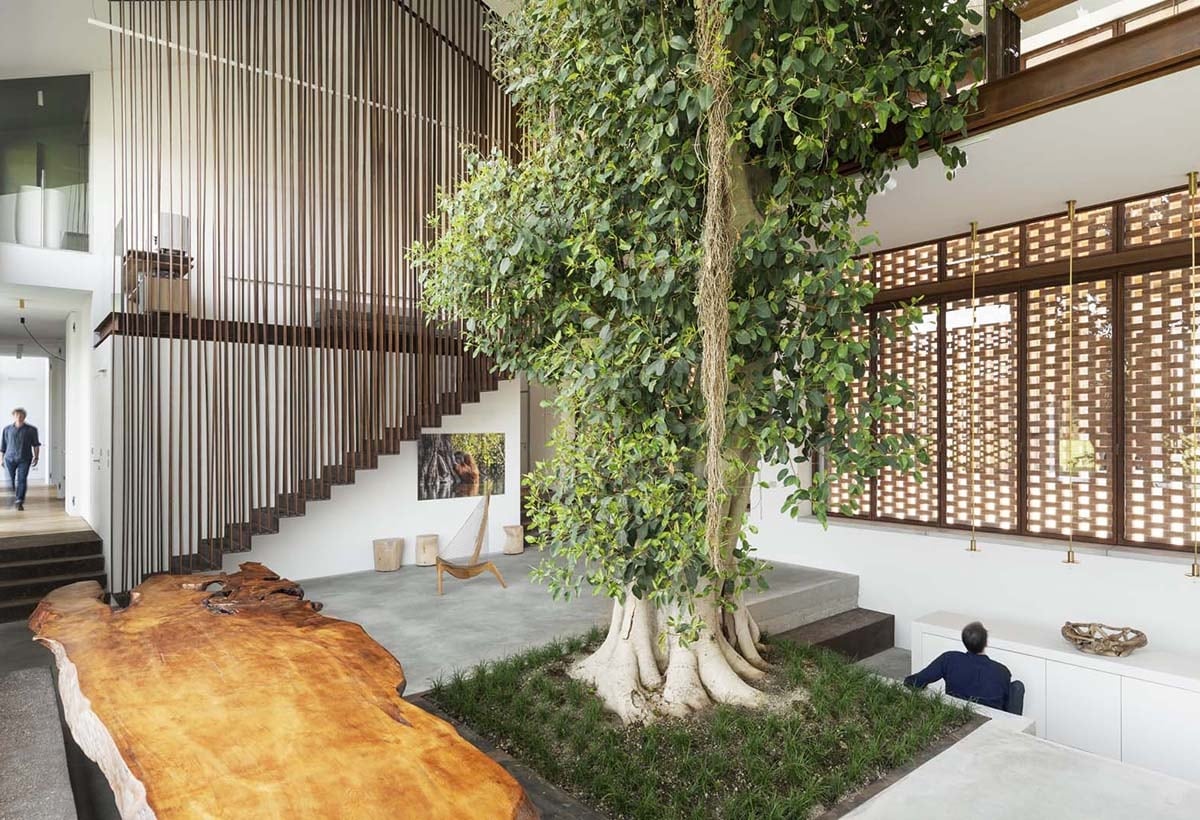 3
The table is Kauri a plank of fossil wood from Riva 1920 that makes the external lawn visible at eye level. Lighting by Viabizzuno. Casements by Secco Sistemi, carpentry by Mario Bertero. Resin flooring by Mapei.

“In ideal terms, it reflects the roots of the company, with its headquarters about 100 meters away, interfaced with – rather than separated from – the house. They are two dimensions that coexist in a relationship of empathy and reciprocity, in the greenery of the park, shared with living presences. Here everyone knows Piero, my stubborn donkey, and my beloved dogs for whom a special room has been set aside inside the house. There are also cats and other animals at the edges of a traditional countryside that has evolved into an interpretation of extreme refinement, thanks to the landscape design by Paolo Pejrone. The greatest pleasure this project gives me every day, in different ways, is that of complete immersion in nature. Inside and outside the house. In the greenhouse where the tree stands, for example, recessed by 60-70 centimeters from ground level, there is a long table from which I can see the lawn at the level of my gaze, beyond the glass.” 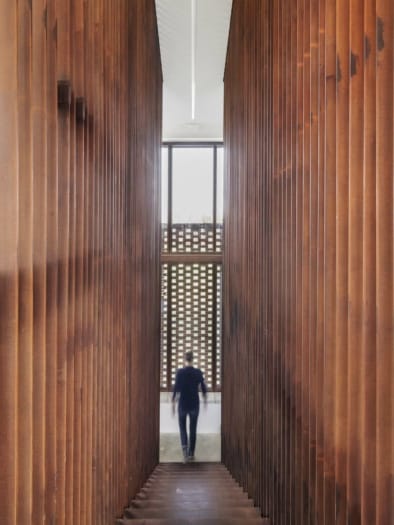 The staircase connecting two of the levels of the house; lighting by Artemide.

As if to say: the countryside is not just the raw material of what is produced in the factory; it is also the elective material of a personal meditative approach to the ‘garden of the spirit’ and biophilia. “In its essence, this new house remains an identification of the place where I have spent a large part of my life,” Francesco Mutti continues. “That rural space where as a child I climbed on little forts made of wooden crates that were used to harvest tomatoes, and that present-future space of the company, containing a series of locations for wellbeing and participation. I am thinking about the restaurant-dining hall, of great quality, which will be open to our population, but also the exteriors and a series of projects with which we are moving forward in a perspective of total regeneration, as the best embodiment of the genius loci. A model in which people, territory and the supply chain live in harmony with our business.”

So while the architecture of the restaurant-dining hall also open to the public, under construction in front of the house, starts to take form amidst the greenery of the park – “it will be a section of land surface dug up and raised as a roof, permitting a particular soft of déjeuner sur l’herbe inside a glass volume, referencing Arte Povera,” say the architects Carlo Ratti and Italo Rota – the Greenary House has been an initial step in the centripetal growth of the entire factory-landscape and the redefinition of the historic farmhouse complex, a sum of different volumes around a classic rural courtyard. 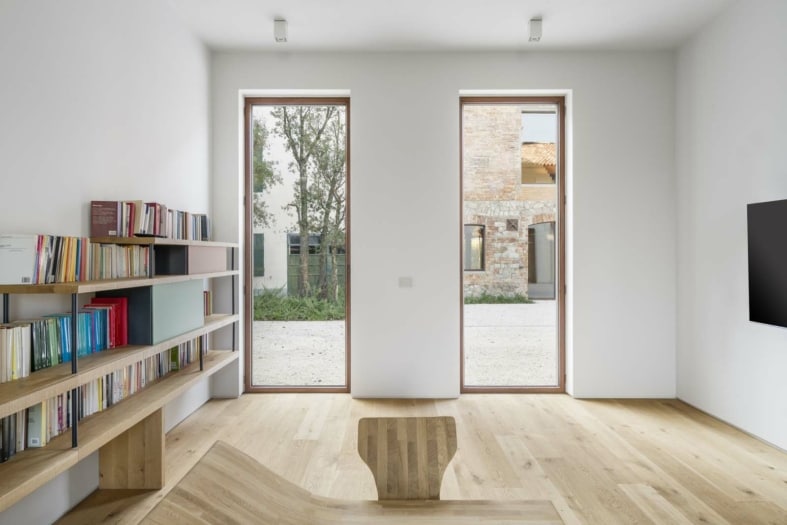 Essential custom bookcases in iron and wood, able to accommodate special formats, are seen in the space set aside for the studio, equipped with Viabizzuno lighting.

“We asked ourselves how we could bring the countryside, which is the center of the professional and personal life of Francesco Mutti, inside the house,” says Carlo Ratti. “The first model of conceptual reference was the Fallingwater house by Frank Lloyd Wright, which thrives on architectural solutions of dealignment. Nevertheless, in the end we shifted towards a more radical choice: to make nature itself into an element of construction, respecting its rhythms. Around Alma we have thus developed a sort of Raumplan, though it differs from the one theorized by Adolf Loos, which put empty space, sculpted by subtraction, at the center. Ours establishes a relationship with nature and with the scale, making it possible to experience it from any point. The games of seven interconnected levels around the Ficus (four below ground, three above) permit dialogue with this living presence from above, from below, from the center and different perspectives, in the perception of a space that is always in a state of becoming. Every room is at a different level of the tree, and each staggered mezzanine contains one function of the home: music, entertaining, dining, meditation, reading, sleep, and so on. If we look back, we see that Ficus specimens were already a part of the large English greenhouses of the 1800s. But thanks to the technologies that have been developed over the last century, we have been able to find new relationships between natural and artificial.” 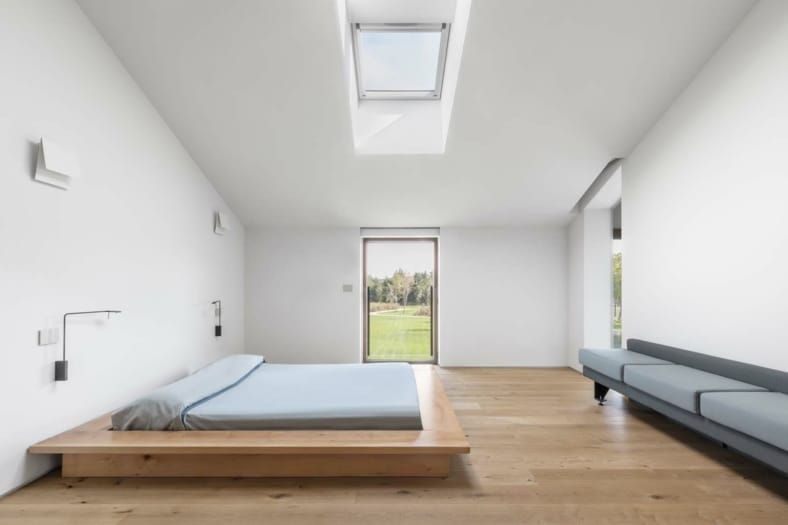 The master bedroom with its references to Japan. All designed by CRA and Italo Rota, produced by Falegnameria Francia.

The past becomes present, and takes on form in experimentation about the future? “Definitely. The project has become an opportunity for the mediation between Natural and Artificial that belongs to the Anthropocene era, repairing the relationship between these two paradigms in a dimension of interpenetration and hybridization,” Italo Rota continues. “In a dynamic process, the house and the tree have adapted to each other. On the one hand, nature becomes malleable like a construction material; on the other, the sensors that analyze the circulation inside the plant indicate the quantity of water necessary for its wellbeing. And together with the other very sophisticated technologies deployed – from geothermal systems to control of humidity in the air, the light from the glass wall facing south with a height of ten meters, the ventilation that passes through the automatic opening-closing of the perimeter windows and skylights – a symbiotic, almost atmospheric reaction is developed between the tree and the enclosure.” 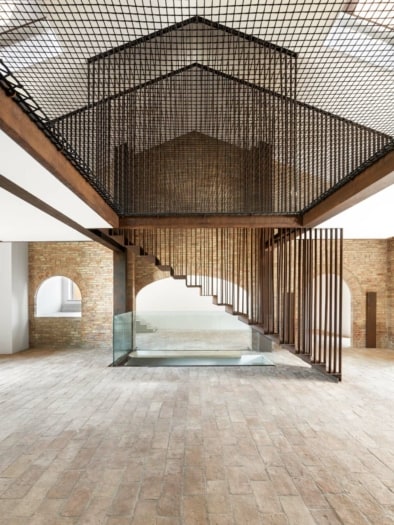 The volume once utilized as a barn has been reconstruction and converted to contain the everyday work activities of Francesco Mutti.

A speculative approach to design that also extends to the furnishings, which are all essential, purist and sober in tone, corresponding to the personal leanings of the owner carefully balanced with those of the architects. The very long table in the living area, next to Alma, echoes the idea of a fossil Ficus, for example. In the master bathroom, three large hollowed bowls, two for washstands and one for the tub, created with a block of stone from a nearby quarry, provide the experience of a natural waterscape that morphs into fire through the stone – almost three meters long – that forms the base of the fireplace in another room. Fragments of memory, awaiting new developments 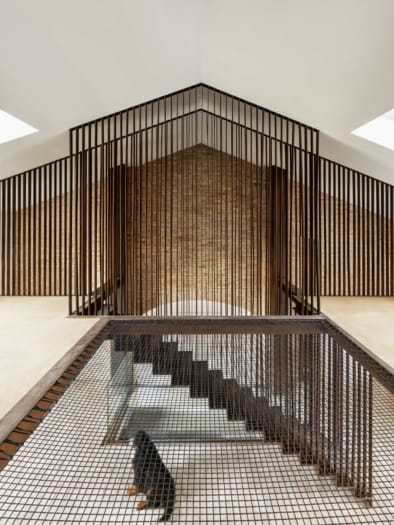 Note the suspended staircase in Cor-ten, a custom creation by the designers, and the elastic screen that creates a personal island of relaxation on the loft.