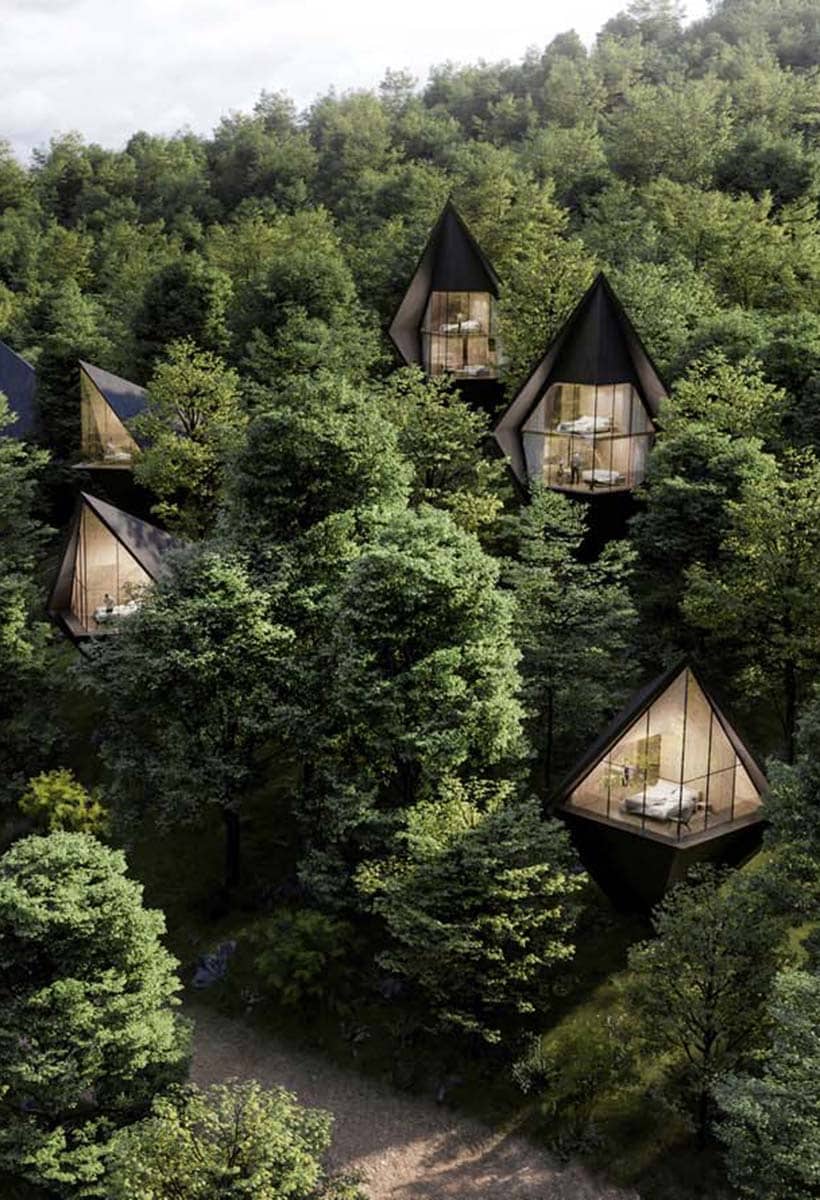 I’m going to live in a tree

#approfondimenti
I’m going to live in a tree

If we did smart-working from a tree house, changing perspective and gaze? Creativity could gain and the spirit as well. After all, a small piece of land and a good connection are enough to create a comfort zone, albeit suspended from the ground ... Many architects have already tried their hand at the design of a tree house that gives shape to the idea of ​​an ancestral dream of life

“I think the pandemic has radically pushed a way of working that previously only existed in theory. Working and creating in the midst of nature can absolutely be stimulating from a creative point of view but not only. The world has gotten a little smaller in recent months, a little slower. We will discover again unique places and places that are not thousands of kilometers away but are around the corner. Maybe near the sea, on the mountain, maybe in a forest, in a tree house?

The reflection of the architect Peter Pichler, who understands sophisticated Tree Houses, thinking only of the pitched roof houses he designed on Lake Dawson, in West Virginia, to respond to the new frontier of slow down tourism and inspired by majestic trees, maples, poplars and oaks, which surround them, stimulates to deepen the theme. Tree houses, shelters suspended between earth and sky, personalized nests. There is no lack of examples that seek a more direct relationship with nature and well-being. With an echo spirit, exact in functions and distances, without too much room for formal complacency. 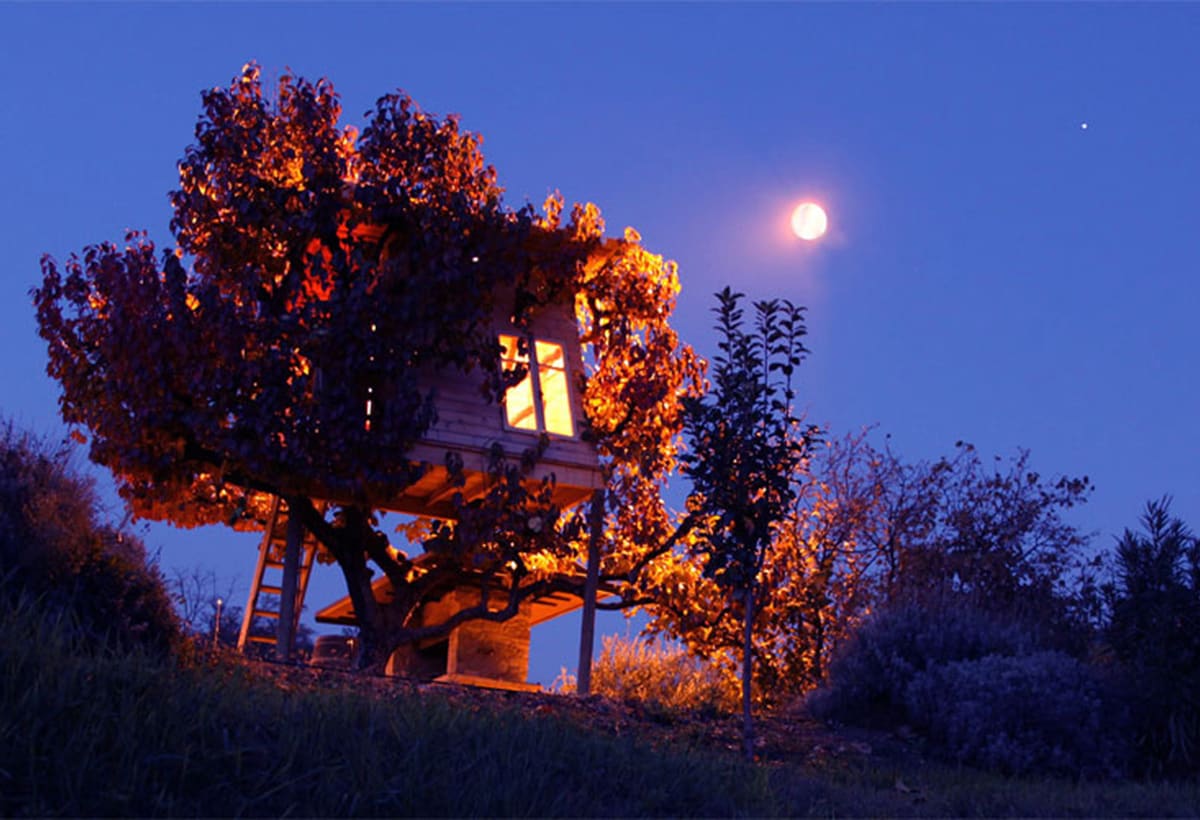 7
Treehouse designed by Iacopo Gozzi with TreeTopBuilder, intended use: wooden house for children.

On the other hand, there are those who, like Italo Calvino's “Baron rampant”, born in Cosimo Piovasco di Rondò, become a perennial 'inhabitant of trees' at the age of twelve due to rebellion. And those who escape or the desire to escape in a suspended hut still embrace the choice of keeping roots firmly on the mainland.

In any case, the metaphor of the tree, as the possibility of seeing reality from a different perspective, remains a dream of children and adults. Because its branches and its branches move with the wind, divide loads and balances, host nests and squirrels, live and suggest similarities of architecture with the natural environment that certainly enjoys greater health than us these days.

So, even if “A city is (not) a tree” as Cino Zucchi reminds us, we are not surprised by the numerous experiments on the subject, which offer new and unusual domestic expressions. Of the fact that "every tree is able to support a dream, in a place out of time", for example, Iacopo Gozzi has been convinced for some time who, with the TreeTopBuilder team (another architect + two treeclimbers + a carpenter), has built an elevated house, suspended between earth and sky, right in Grezzana (Verona) where he lives. “It is possible to build it: just follow the safety regulations, carefully study the territory and choose the right tree”, he explains. “It can become a bespoke, custom-made whole, in relation to the client's personality, in terms of tastes, interests and budget of course”.

“
The metaphor of the tree, as the possibility of seeing reality from a different perspective, remains a dream of children and adults. Because its branches and its branches move with the wind, divide loads and balances, host nests and squirrels, live and suggest similarities of architecture with the natural environment."

In Italy there is still no legislation in this regard but in 2018 the process that led to the implementing decree to regulate the parameters relating to the construction of tree houses in the territory of the autonomous province of Trento was concluded. Sharon Davis Design with her Garrison Treehouse, near New York, has instead built, in the park belonging to an old farmhouse in the hills, a generous suspended play area, which becomes habitable thanks to a dynamic system of climbing nets. hatches and slide ladders. Materials used: steel (for the structure and the staircase), cedar (for the external cladding), polycarbonate (for the internal ones). In the higher 'nest', the study with the mahogany desk and the best views of the greenery. 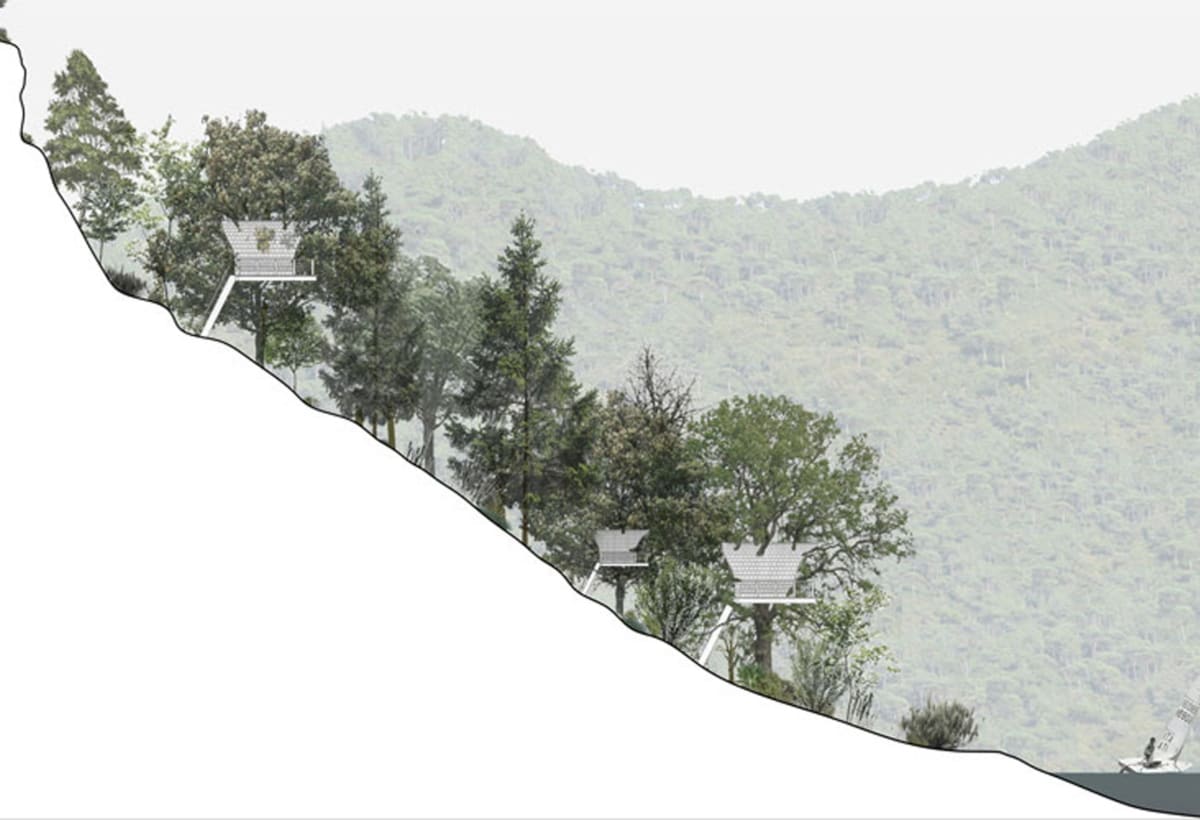 4
Project study for a sustainable tourism proposal along the shores of the Lamar lakes to be built with housing units on trees that support the slope of the land. The thesis was developed for the autonomous province of Trento by Iacopo Gozzi with TreeTopBuilder.

If the imaginary is our projection on the things that surround us, then how can we forget the poetic Bird-apartment, designed by the Nendo design studio which contemplates a small 'block' of apartments built at the Ando Momofuku Center in the forest of Komoro City in Giapponde: on the top of a tree, one person and 78 birds can coexist peacefully. 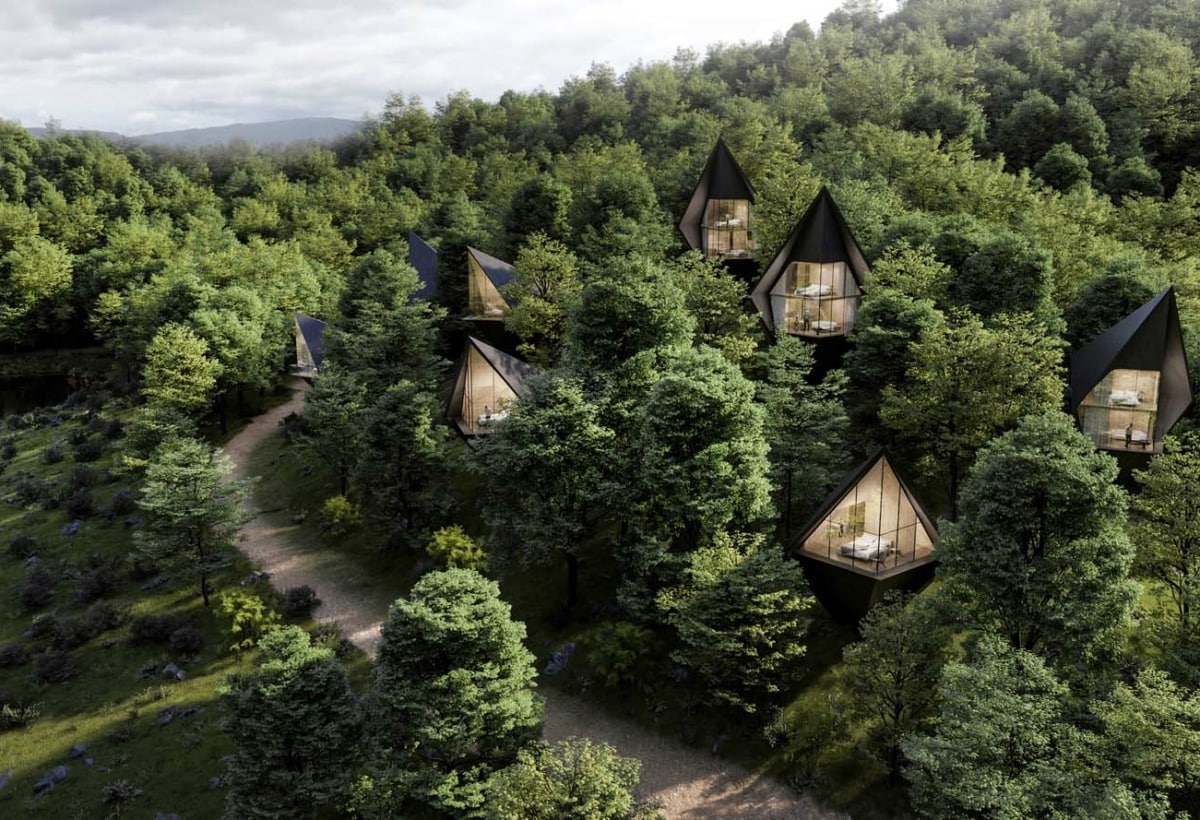 3
Render of the Tree Houses designed by Peter Pichler in the United States, West Virginia, in the suggestive wooded scenery of Dawson Lake.

A tree house that educates sustainability (specifically for American boy scouts) is also the one developed by Mithun, an eco-design studio based in Seattle and San Francisco: the Sustainability Treehouse, a tower construction, among the trees of the Summit Bechtel Reserve, Virginia, with spaces on different levels conceived as staggered platforms in local wood that recall the image of the branches around the trunk. In the search for a fusion with nature and for the waste of zero energy (it self-produces all the energy consumed thanks to the integration of the photovoltaic system, wind turbines and rainwater recovery) it is among the top 10 bio-architecture projects selected by AIA in 2014.

On the sea of Thessaly