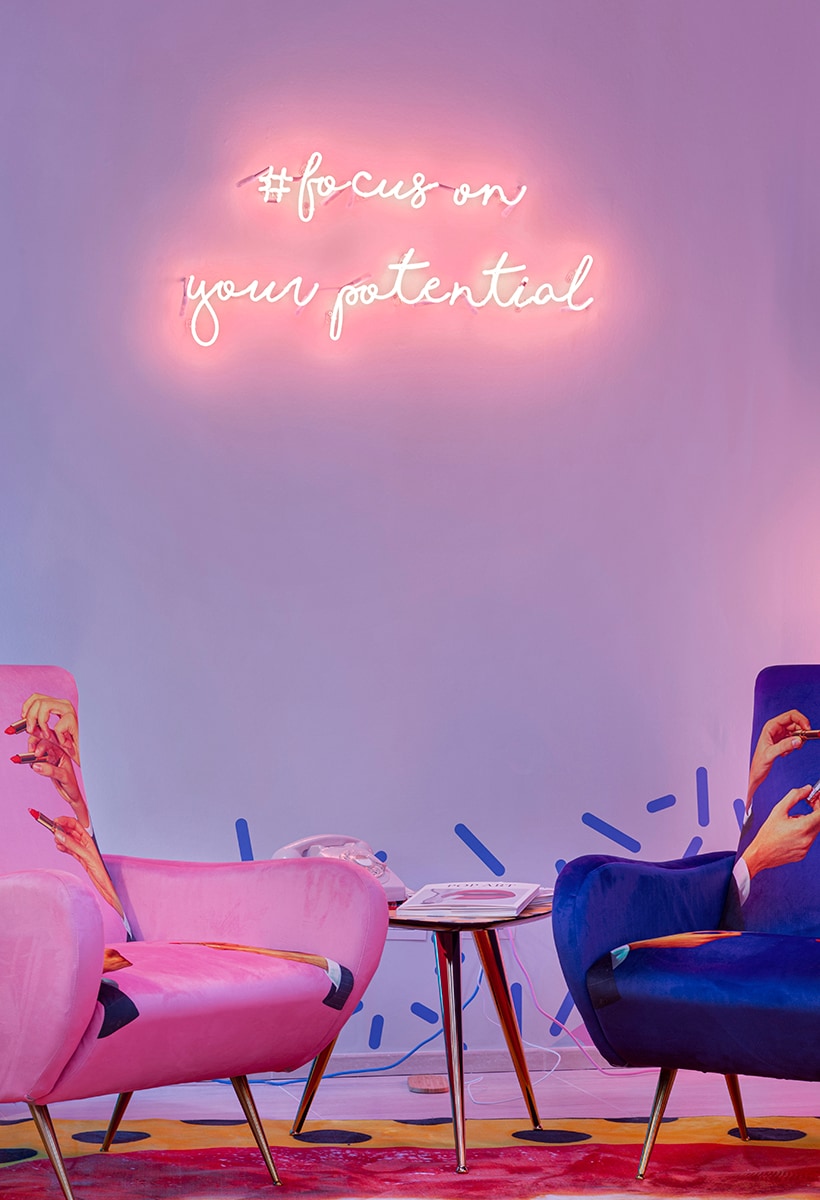 Where talent is born

#under30
Where talent is born

Defhouse opens in Milan, the first concept house where the inhabitants, young influencers, are stimulated to cultivate their creativity. A real training hub for TikTokkers, between Eighties design, Memphis-inspired graphics, pop references, neon, saturated and fluo colors. Instafriendly, of course

The idea of collab houses, disguised as billion-dollar villas, breathtaking swimming pools and experienced by groups of influencers as protagonists, changes completely. And in the positive. No more stage-places where the only purpose is to give a show and create engagement: now the time has come to ‘give substance’, creating culture and depth, sensitizing the inhabitants of the house to important issues, so that the talents of the residents are stimulated and cultivated so as not to become just meteors that run out in a flash between a photo and a dance step. This is why Defhouse was born, a project signed by digital company WSC - Web Stars Channel, the first concept house in Italy and in the world that is not just a location but a real communication channel and a training hub for young people. 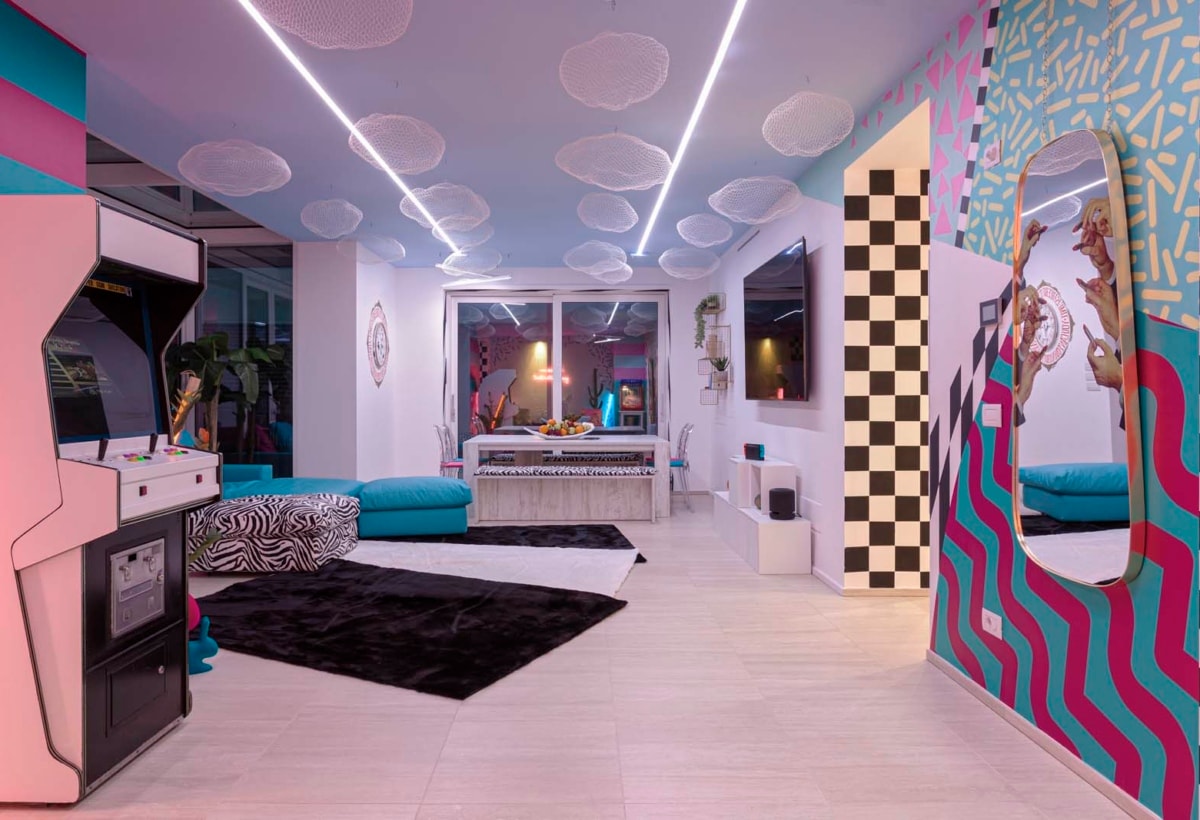 A house where the protagonists are not the inhabitants but its style, its way of communicating, its environments and its desire to educate and sensitize the world of young people to important issues: the Defhouse speaks directly to the GenZ becoming an Academy of talent through its Instagram and TikTok profiles and on its YouTube channel.

“The guys inside the Defhouse are not smarter than others but they are aware of how important it is to work on their personal growth”, explains Luca Casadei, CEO and Founder of WSC. “The young people of this generation have a low attention threshold, they don't know much outside of social media and want to become famous: perfect ingredients to achieve a success that will evaporate in a flash without leaving any mark. The first two unwritten rules that the boys accepted to enter the Defhouse are: nourish themselves with knowledge to learn to choose what future they want to live in, and leave pride aside in order to value every good thing that happens to them”. 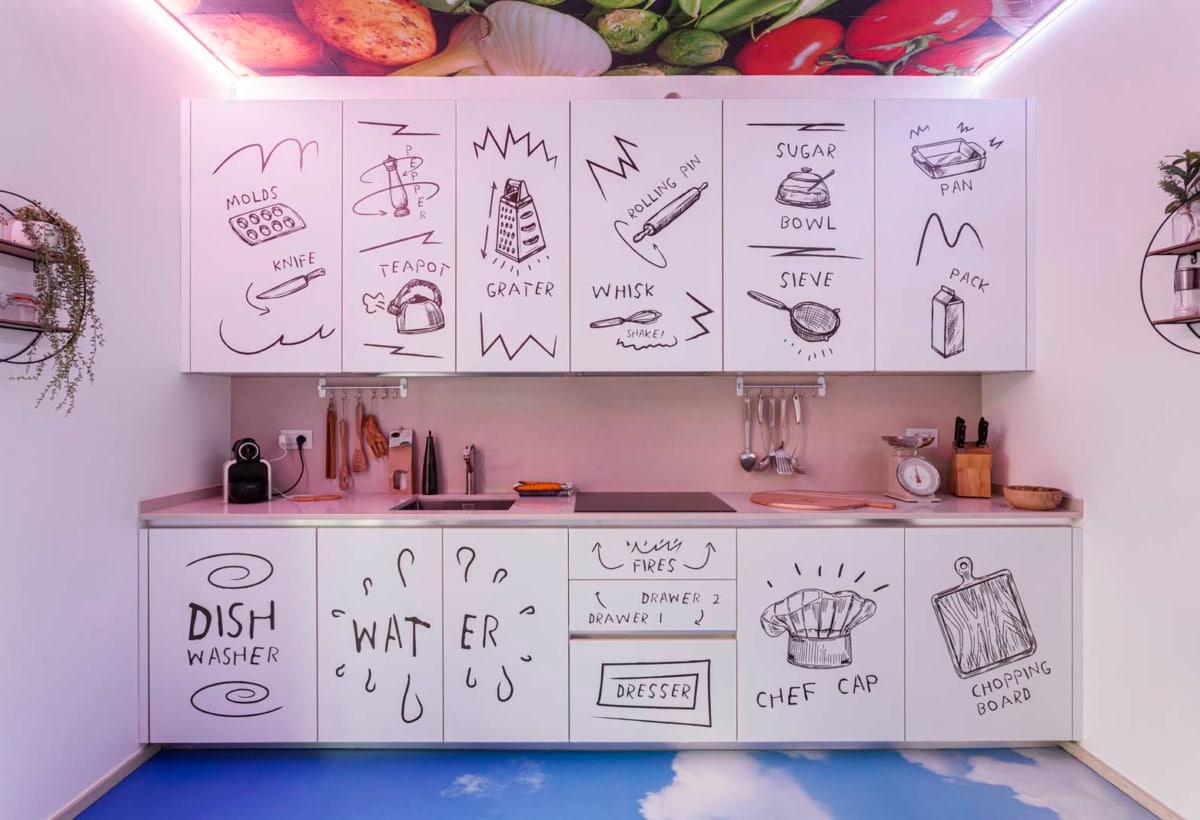 Giuseppe Greco, partner and creative director of WSC says: “The group of young people who live in the house is the result of careful and laborious research that lasted several months. We chose them after examining hundreds of social profiles for their artistic and complementary qualities. There are those who are good for dancing, some for singing, others for acting and so on. The choice was made not on the basis of their popularity or the number of followers on social networks, but because we saw in them a talent to be cultivated and the ability to function as a group, to contaminate each other and give a higher value to the Defhouse project”. 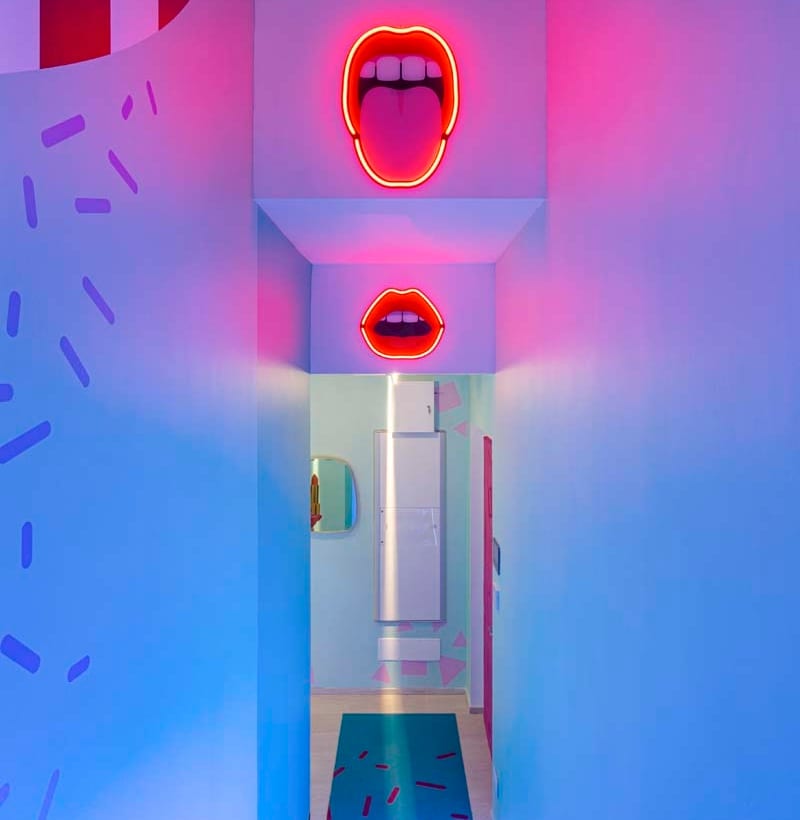 The Defhouse communicates through Defne: an indefinite entity that speaks to users and young people and identifies itself thanks to a strong aesthetic, poised between luxury and pop.

At its entrance the living room opens up, surrounded by large windows where colors light up in the sofa, on the Seletti armchairs, on the walls and in the accessories, with a ceiling characterized by ‘clouds’ by Magis illuminated by neon: versatile light sources and of great charm protagonists in the Eighties that become the common thread throughout the house, transforming themselves into artistic writings on the walls or into the curious emoticons that identify the boys of the house. “We are in Milan, the cradle of the movements that have changed the way of understanding design: we are talking about Alchimia, Memphis which in the 1980s transformed the approach to design", says Art Director John Pentassuglia. 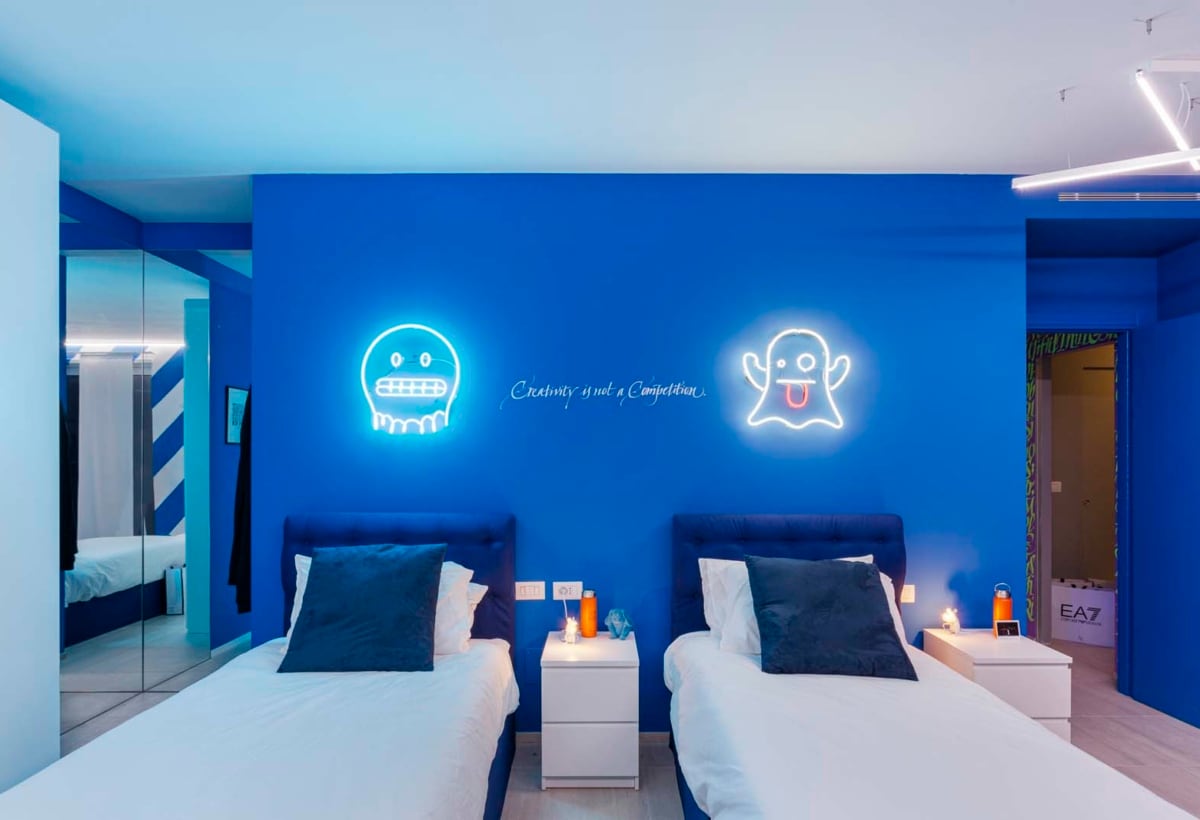 Saturated and fluo colors, Instantfriendly, take up the brighter soul of the postmodern trend in a new light through objects and furnishings with a strong visual impact, used to capture the fleeting attention of social media.

“The house is infact a large set, over 500 square meters, where every corner is characterized by bold and non-trivial graphics: like the corridor animated by the phosphorescent writings of Luca Barcellona, reference in modern calligraphy and author of the cover of Interni Novembre (see here), who manages to bring together manual skills of an ancient art, such as writing, with the languages and tools of the digital age ”, explains the Art Director.

There is no shortage of luxury environments, such as the veranda furnished with a hydromassage tub and a Jacuzzi sauna that becomes a relaxing corner inspired by oriental atmospheres. Going down to the rooms, the walls light up with graphics inspired by Memphis, a group created by the genius of Ettore Sottsass, who in the 1980s gave a kick to the rigor of rationalism with his crazy geometries and pure and eccentric colors. The private part, that of the kids' rooms, is introduced by a corridor that marks the passage with light effects, almost dreamlike. The rooms are tailored to the personality of the residents and, each one, is defined by a supporting color: blue, gray, pink or red. 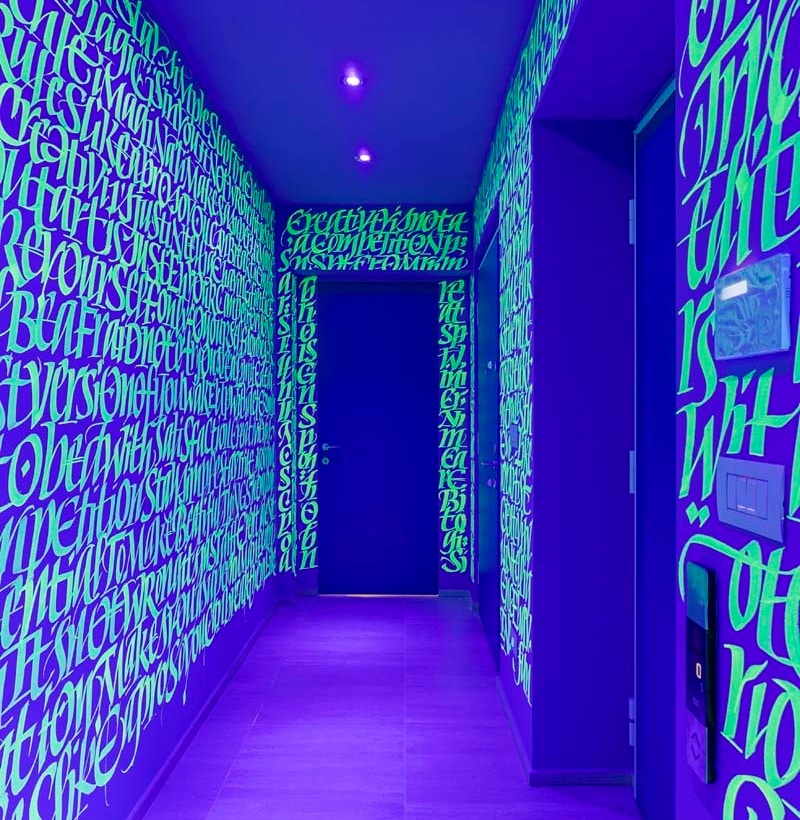 Hyper-connected, the Defhouse thus lends itself, in every corner, to become the ideal set for ‘producing content’. But it is not a reality show: the kids are free to go out and carry out daily activities, having only to respect the rules of good conduct and follow their studies with profit, in order to have and transmit ethically correct behaviors and become a model for their generation. 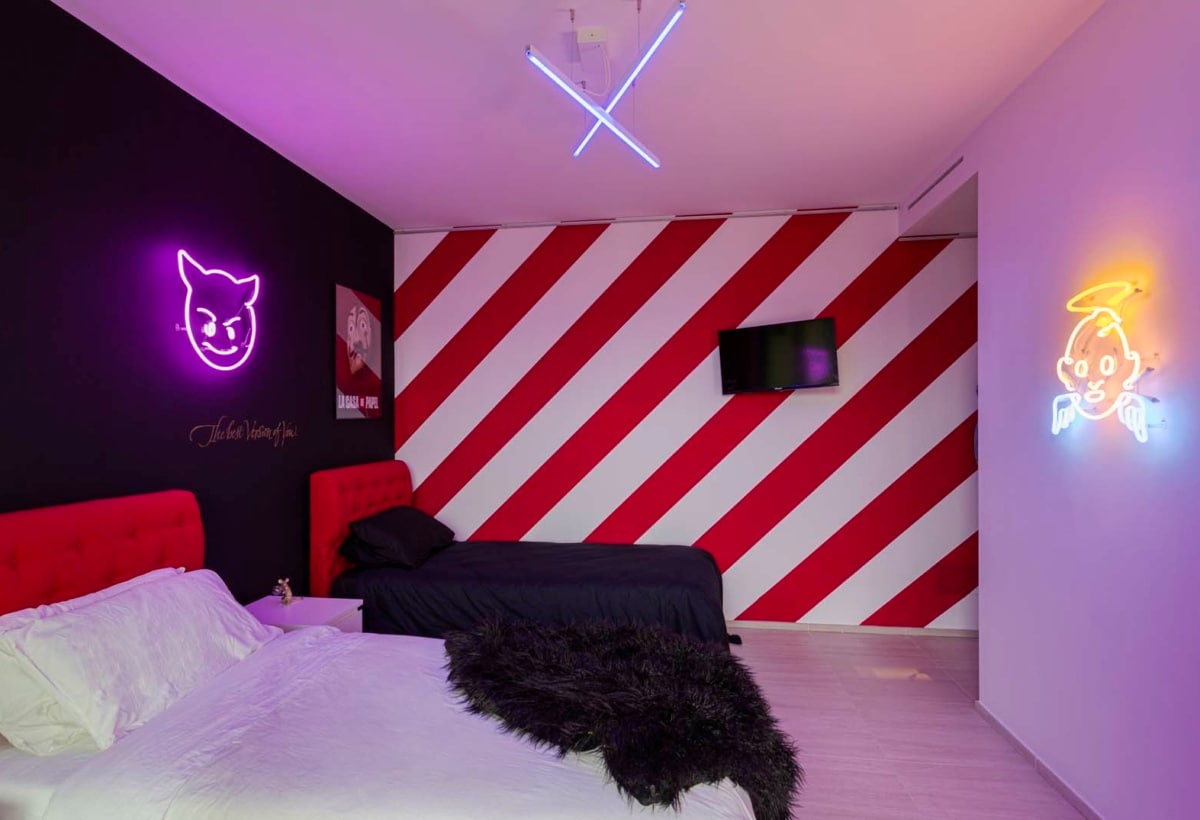 Not only that, the kids inside the house are continuously involved in training courses on artistic themes, such as acting and diction, on topical issues, such as ecology and sustainability, but also on modern professions. This training will thus stimulate the guests themselves to create content of a different level, together with the Defhouse, so that the GenZ generation, to which they are addressed, can see in them examples to cultivate their passions and expand their point of view. Because, as the great American composer Roger Miller said, “It's one thing to have talent. It's another thing to find out how to use it”.