A young Italian family chooses an apartment in an old Parisian hôtel particulier in the Marais as a pied-à-terre. And entrusts the interior design project to studio noa *

Hôtel particulier, literally translated, means mansion. Specifically, a large noble residence in the form of a palace, characteristic of French urban environments in the eighteenth century, with an internal courtyard and a garden as in large country villas. In particular, in Paris the particulier hotels stand in isolated pride in the urban fabric. The Nicolai hotel is the setting that welcomed the architecture and interior design studio noa* on their first inspection. The task: to renovate an apartment that occupies part of the second floor and the attic to make it the new home of a young family, recreating the feeling of being at home.

3
Access from the street to the hotel particulier Nicolas in Paris.

The interior designers, in agreement and in continuous dialogue with the client during the preparatory phase of the project, wanted the apartment to best tell the story of the current owners. The result was the delineation of their nomadic spirit and the reference, during the first approaches, to an object with a strong symbolic meaning: the logarithmic spiral shell of the Nautilus. Described for the first time in 1638 by Descartes, the logarithmic spiral is the trajectory of a point that moves with uniformly accelerated motion on a ray that rotates uniformly around its origin.

3
The living area. It is possible to see the spiral trend of the apartment's architecture.

The Nautilus, on the other hand, is among the very rare creatures to have survived the Cretaceous period. This is said to be due to the shape of its shell, which allowed it to always feel at home, a shell so well studied that it has allowed a hermit crab to survive from dinosaur times to the present day. The shell, which symbolically represents domestic comfort, and the Parisian inspirations have given way to a project in which the different functions of living naturally succeed one another and where the curved line becomes the stylistic code of the intervention.

3
The focal point in the design was the connection between the two levels: a sinuous staircase with an organic shape visually lengthens the terrace walkway.

The roofs of Paris

In the choice of furnishings and in the design of the oak furniture, noa * wanted to bring the elegance of the Marais, the neighborhood in which the building is located, to the interior of the apartment. The color of the blue-gray marble, the fabrics of the cushions and upholstery, the choice of materials and colors for floors, ceilings and walls are inspired by the rooftops of Paris.

The ground floor has a service entrance and one dedicated to guests: the chromatic and material division of the floor stands out from both perspectives: the living area is in bleached oak parquet, laid in a French herringbone pattern, while the distribution areas I'm on the terrace. It seems that a walkway crosses the floor creating two islands: on one side a niche overlooking the Seine, where you can read or chat, made of oak and furnished with black leather cushions. On the other, the kitchen and living area, where the gaze lingers on the gray-blue Bardiglio Imperiale marble, used for the fireplace cladding and the kitchen top. The Chester sofa and a cozy dining area with bench complete the furnishings.

2
View of one of the bathrooms.

The focal point in the design was the connection between the two levels: a sinuous staircase with an organic shape visually lengthens the terrace walkway. To its left, the service area (laundry, toilet, walk-in closet) is enclosed by a curved wall that follows the course of the staircase. To his right, still on the lower level, two bedrooms and a bathroom. The master bedroom is furnished with a freestanding bathtub, made from a single block of Botticino Fiorito marble. The washbasins and shower surfaces are also made of the same material. Distributing the loads created by the bathtub in such a way that they could be supported by the old supporting structure was one of the biggest challenges in the project.

3
The upper level houses a multifunctional room equipped for home cinema and a guest room with bathroom, both illuminated by skylights on the roof.

The scent of wood

The upper level houses a multifunctional room equipped for home cinema and a guest room with bathroom, both illuminated by skylights on the roof. The result is a project with a serene, calm and welcoming atmosphere. An apartment with curved lines enhanced by the scent of wood, where you can immediately feel at home. 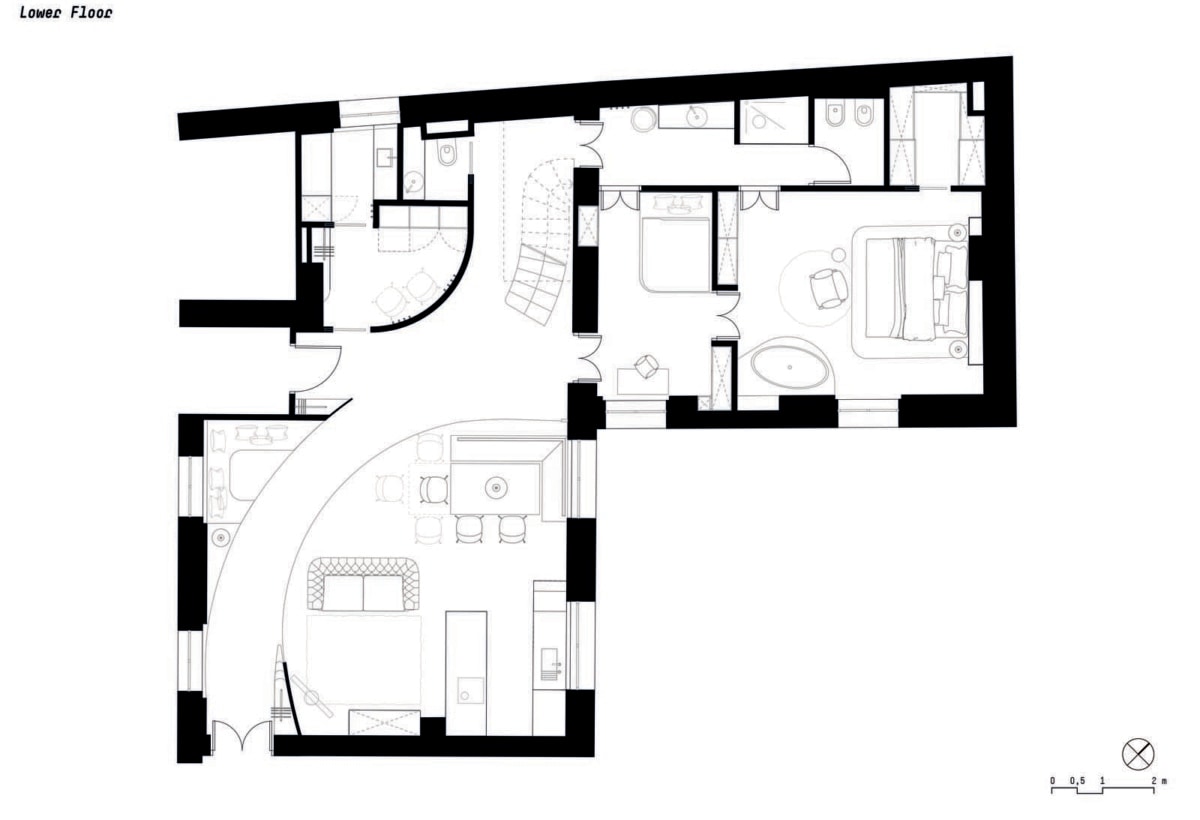