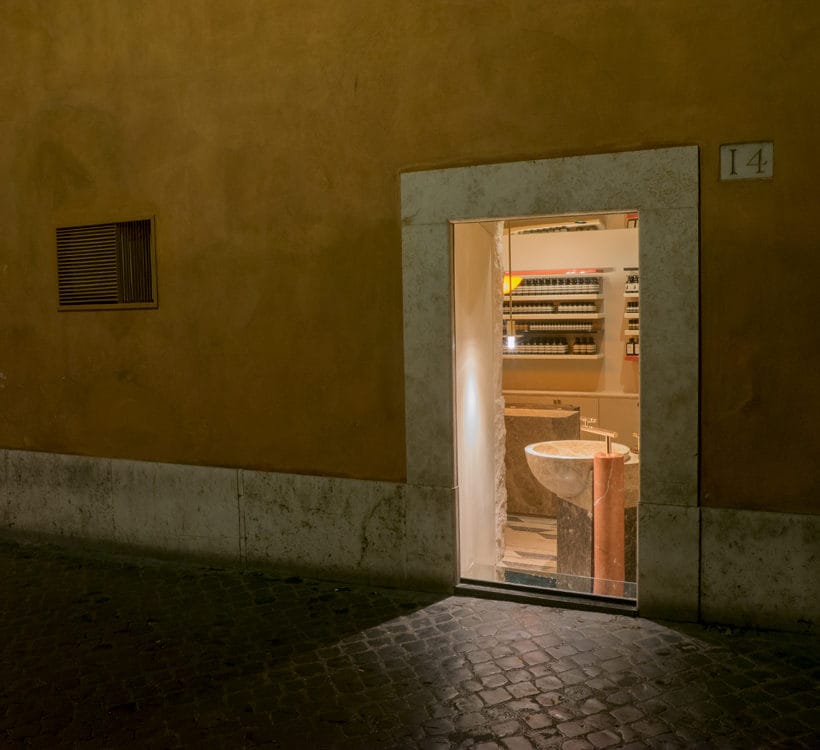 Inspired by history, materials and rigorous, discreet luxury, austere and monastic: this is the new Aesop San Lorenzo in Lucina in Rome.

Every Aesop store around the world – and now there are about 80 – is different from the others: each space is done by a different designer, in relation to the site.

The new project in Rome is by the architecture studio of the film director Luca Guadagnino.

This first collaboration between Aesop and Luca Guadagnino began with a random encounter in Los Angeles. The relationship with the interior designers of the company was then reinforced during the course of a trip to Rome.

The store is the first project of the studio of Luca Guadagnino in the retail sector. It is located at Piazza di San Lorenzo in Lucina, near the 5th-century basilica of the same name, founded as a domus eclessiae, a dwelling utilized as a place of prayer and refuge.

The hues and materials of the basilica, as well as other specimens of Roman architecture (especially the nearby Pantheon), had a strong impact on the design process for the space, reflecting the spirit of these iconic settings and certain unforgettable figures connected with Rome, like Pier Paolo Pasolini, Alberto Moravia and Maria Callas.

“During a pleasant conversation we understood that we were attracted by the idea of a Rome that no longer exists, that of the Fifties, and by the juxtaposition of ancient buildings and the surrounding countryside. The cinema of Pasolini was another major source of inspiration, especially the film from 1967, Oedipus Rex,” Luca Guadagnino explains.

The space, with its discreet, sophisticated elegance, stands out for its austere language. The rudimentary use of local materials like straw, marble and travertine determines a coherent setting in a space of modest size, spreading a sense of monastic order and tranquility.

On the floor the rhomboid motifs are interpreted in three different tones of travertine, as a tribute to the interiors of the Basilica of San Lorenzo in Lucina. The furnishings are composed of blocks inlaid with marble from Lazio, generating geometric and chromatic effects. The ceiling features architectural strips inspired by the thatched roofs of the historical dwellings of the Agro Pontino.

These elements form a contract with the cream-color painted wood used for the display shelves; original touches of black enamel suggest the characteristic black eyeglasses of Pasolini, while a mat in straw and fabric on a custom seat alludes to the materials utilized in the film Oedipus Rex.