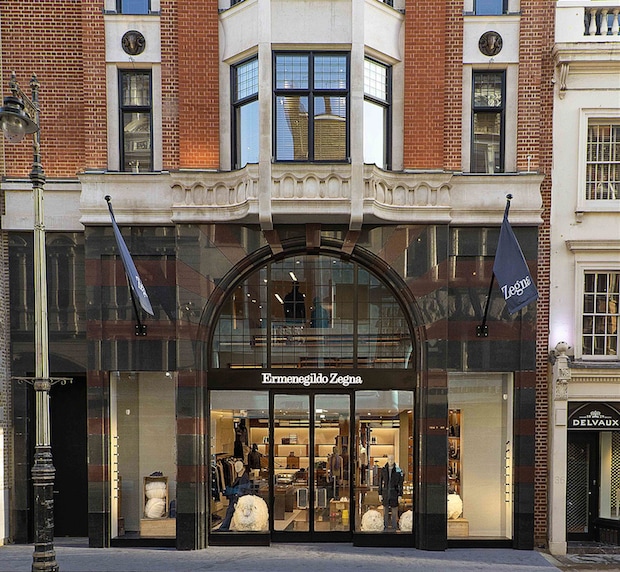 With an area of 605 square meters of luxurious retail space on four levels, this is the 19th concept store, designed by Peter Marino, to open around the world.

The distinctive feature is the façade, based on the English tradition, in tune with the historical architecture of New Bond Street. Marble in various tones of gray and red, characteristic red bricks, bow windows and a vintage bar from the 1950s form a vibrant tribute to British culture.

The store offers a virtual voyage in the world of Ermenegildo Zegna and its luxury collections.

On the ground floor customers are surrounded by the dark, natural tones of the entrance. The new area designed by Peter Marino to contain the Zegna ready-to-wear collection stands out for its polished rosewood with a rustic motif, and blanched ivory-tone ashwood.

The first floor features pale colors, with walls in blanched ash and 3D plaster. The furnishings include chairs and a sofa by Afra & Tobia Scarpa.

A staircase that seems to float leads to the second floor, with steps in ebonized oak and metal cables, backlit with LED fixtures.

A special area is set aside for the Ermenegildo Zegna Couture collection, featuring masterful use of exclusive materials, such as carved mahogany, ivory-tone oak, parchment and black tempered steel, against a backdrop of ivory tones.

The third floor is divided into two separate zones, enhanced by a bow window that faces New Bond Street, a golden fireplace in pale marble and a vintage bar from the 1950s, recreating the atmosphere of a British gentleman’s club. Enhanced by works of art, a private space has been created here for the bespoke tailoring services.

For the opening, the artistic director Alessandro Sartori  presented the special Bespoke Shoe Collection, 9 exclusive models of shoes and boots made by hand by one of the most innovative and versatile footwear producers in England, Gaziano & Girling, available only at the new store in London.

Finally, Gildo Zegna and Alessandro Sartori presented the tapestry Dare / Avere (2016), created by the South African artist William Kentridge, as an initiative of the ZegnArt platform.

A new Milanese showcase for Cantori