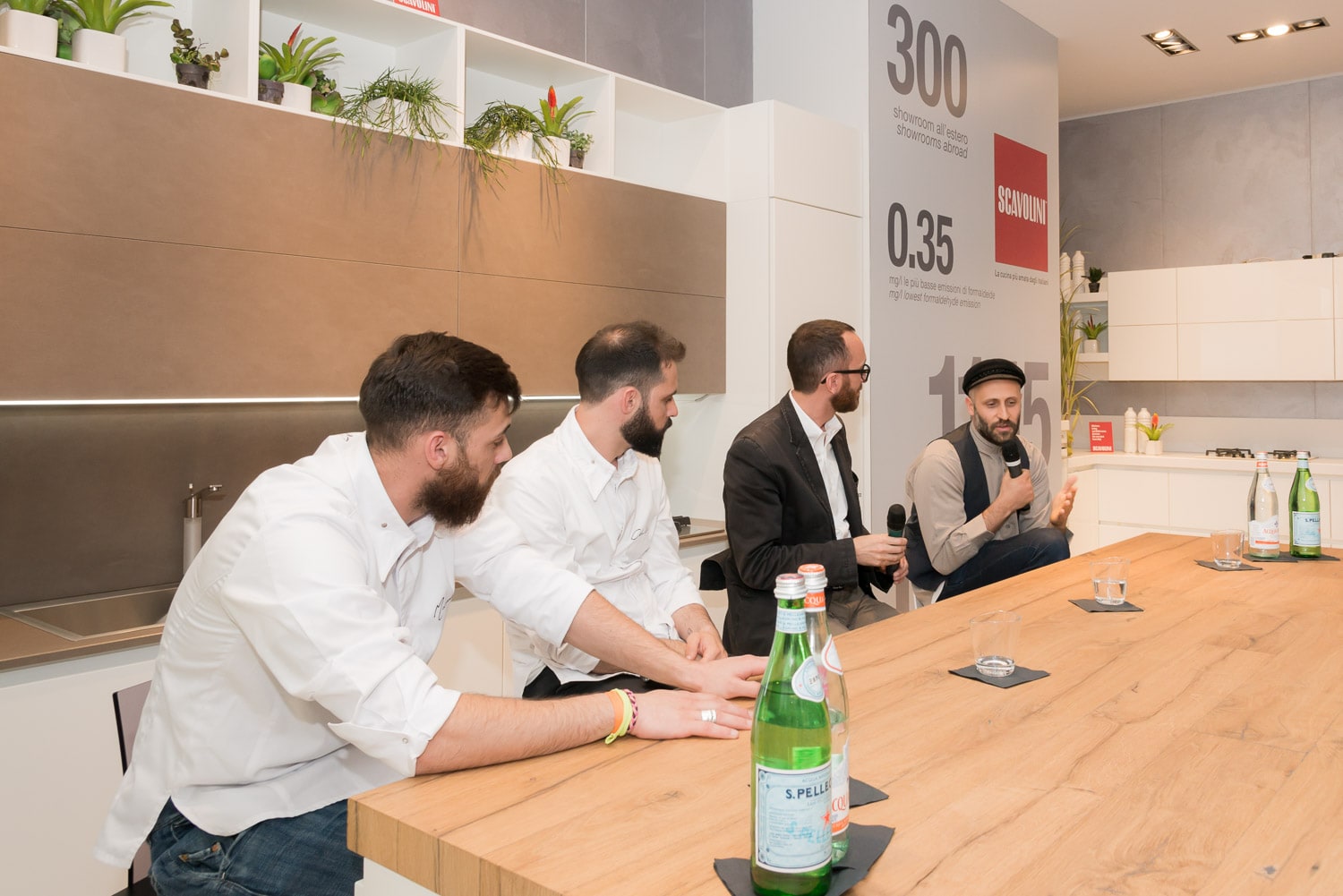 From the provinces to the world: this is the fil rouge that connects three stories of families and the territory. Scavolini, from Pesaro, the favorite kitchen of Italians. Andrea Rosso, art director of Diesel Living, represents the new generation of the company, with headquarters in Bassano del Grappa, a global brand and a symbol of unconventional creativity. The Costardi brothers – Christian, the “savory” chef and Manuel, the one who makes sweets, are creating a restaurant (or a “risotteria”) in Hotel Cinzia to keep a promise made to their grandfather: to bring the cuisine of Vercelli into the world of international gastronomy.

At the Scavolini showroom on Piazza Missori, featuring a window display with the Diesel Social Kitchen, which Rosso says will soon go through a new design episode, the discussion focused on the pride of coming from the provinces, territorial excellence, and a tailor-made approach to food and fashion.

“We got started by playing with Dolce Forno!”
“I started out in the Diesel warehouse.”
The three protagonists kicked off the debate.

The chefs continued. “The family in the kitchen is the signature of Made in Italy, and the cook is not an artist, but an artisan of taste, with the job of selecting and combining raw materials. Our favorite material is rice. For the 25 risotti on our menu we use an exclusive variety, halfway between brown and white, which we call Carnaroli of Manuel and Christian,” the brothers explain, presenting “the tailor-made rice for Expo, because it interprets the ingredients of three clusters: coffee, rice and cereals.”

“Tailoring is a nice term to use for food,” said Rosso, “because it expresses the process of the material, from selection to assembly to consumption. We too have a passion for the products of nature, and at the Diesel Farm, on the hills of Marostica, we produce oil, wine, grappa, asparagus and cherries.”

From the earth to the home to the garment, then. Diesel is a synonym for versatile creativity identified with a lifestyle. Leaving room for personal alternative projects for Andrea Rosso, like his own brand MYAR, offering reworked military vintage trousers, or the idea of opening an original take on the classic watermelon stand, on an island in the Brenta at Bassano.

As for creativity, the two brothers keep the pace, serving up their risotto in a can (a reinterpretation of the famous Campbell’s cans, in a fourth variation, after the debut in 2012 as a tribute to Andy Warhol). The Costardis are also designers, in a way: “In the end our work is not just cooking. By now everyone can have technique. We also have to add the idea, the culture. The can is an object of great values: it conveys the aromas to the nose, lets you eat while walking, to make risotto into street food; it keeps the food warm and becomes a fetish object you want to take home.” Which was just what happened at the end of the evening. (K.C.)

The wines tasted during the event were Prosecco Cantine Bevilacqua and Camargi Agricola Fabbriche Palma (www.winelandscape.com)