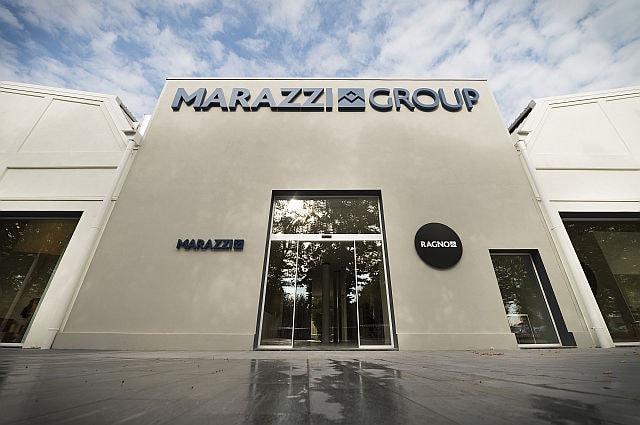 Marazzi has a new headquarters, the result of a major renovation effort at the historic facility near the center of Sassuolo, where the company was founded 80 years ago and where over 900 persons work today. The new headquarters of the group is composed of completely renovated office buildings, two new showrooms for the brands Marazzi and Ragno, and the historic Crogiolo.

The new office building (designed by the architect Gianluca Rossi ) has been subjected to a complex remodeling on the outside, underlining the original H-shaped form of the architecture, while the interiors have been completely restructured, including physical plant systems.

The new showroom for the Marazzi brand (designed by the architect Gianluca Rossi; styling by Stefania Vasquez) has a concept based on the theme of “looking beyond.” Starting from the three large monolithic towers, six meters high, covered in ceramic, everything rotates around the idea that ceramic tiles, in a different perspective than usual, can also be a way of encouraging people to raise their eyes to look at new horizons.

Next to the showroom, separated by the new central entrance on Via Regina Pacis, the Ragno showroom (by architect Gianluca Rossi; styling by Marta Meda ) focuses instead on the concept of “home” and residence, with the various types of ceramics that can be used to enhance different domestic spaces.

The Crogiolo (concept by the architect Monica Melotti; architectural design by Gianluca Rossi ) is the oldest site of Marazzi, a historical reference to the first industrial plant from the 1930s, where the first ceramic tiles were made by Marazzi. The name Crogiolo (Crucible) dates back to the 1980s, when the building became a research center open to the experimentation of artists, architects and ceramists, invited to work on new, creative uses of ceramics. The space has been treated to painstaking conservative restoration, giving it a new life while respecting its historic importance for the company and the entire district.