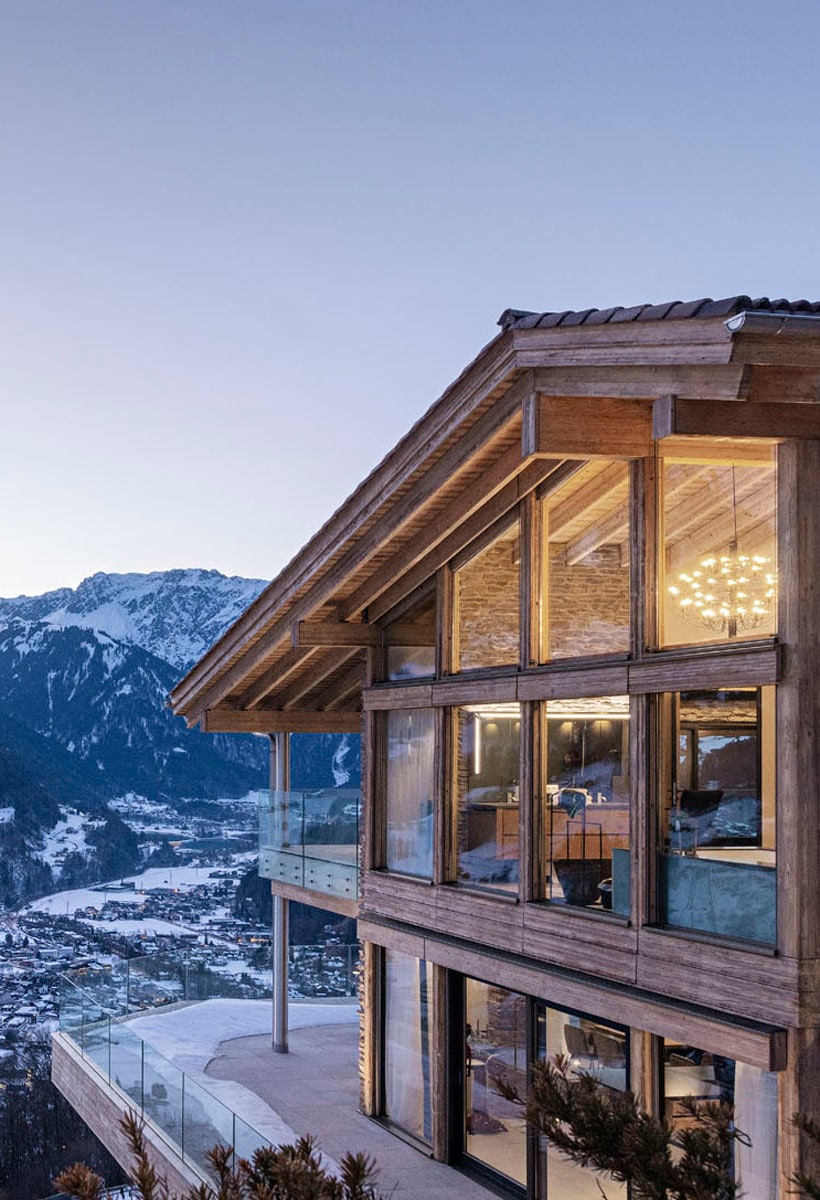 Designed by Studio monovolume architecture+design, 'Chalet D' is a modern holiday home with a spa area for relaxing surrounded by the scenery of the Austrian Alps

Linked, in the collective imagination, to the cold and snowy winter season, in reality these constructions were originally made as summer bases: functional, spartan, resistant structures, often used as granaries during the agricultural activities that animated the summer season. We are talking about chalets. The etymology can be traced back to the Swiss Romance language 'chalet' meaning shepherd's hut, but the term in turn derives from the pre-Roman word 'cala': a protected place, shelter. In fact, this type of multi-purpose building originated as a shelter, usually a single-storey building, used as a shelter by cattle breeders and consisting of a dwelling, stable for the animals, granary and store for provisions. 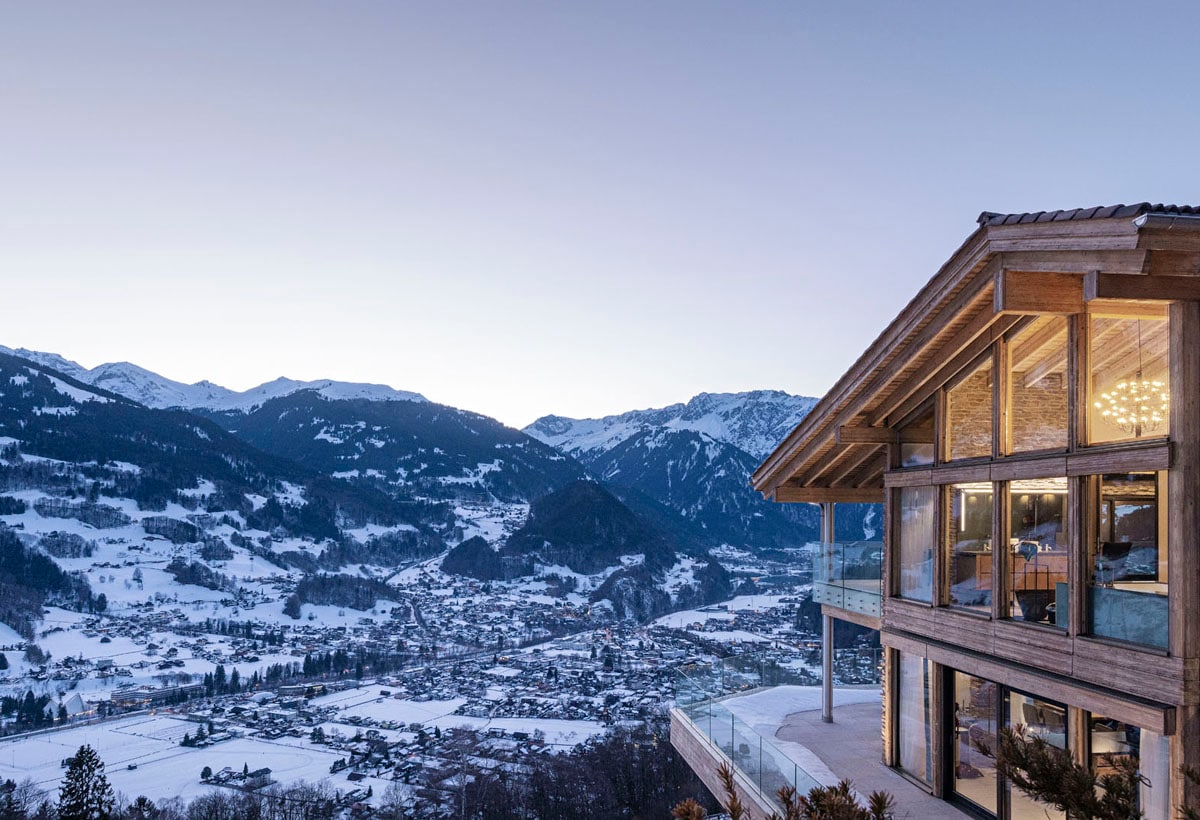 3
In the gallery: oak wood, dry stone walls and exposed beams lend the architecture the atmosphere typical of Alpine tradition.

Over time, the chalet has evolved into a dwelling with simple, rustic forms, made of local materials such as wood or stone, intended as a tourist facility, a holiday or weekend home, a temporary dwelling for short trips, sporting activities, especially in Switzerland, Austria, Trentino, South Tyrol and throughout the Alps. 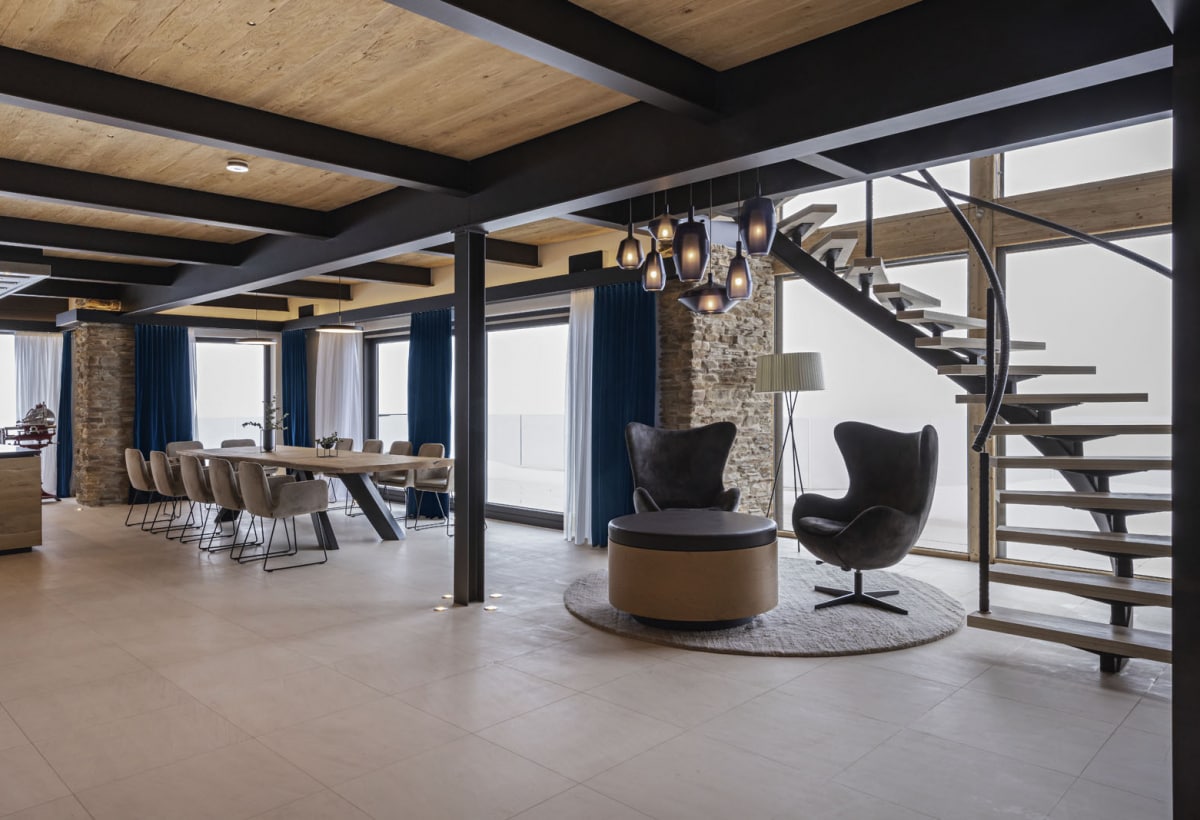 3
In the gallery: inside, the beams have been restored and are clearly visible due to their dark colouring.

Chalet D, designed by Studio monovolume architecture+design, is a holiday chalet with a spa area for relaxing surrounded by the scenery of the Austrian mountains. The project gives the existing building a new face and puts it in dialogue with its surroundings. The oak wood, dry stone walls and exposed beams on the façade give the architecture the atmosphere typical of Alpine tradition. After all, the element that has always distinguished chalets from other types of mountain houses has been the attention paid to the aesthetic care of the façade. Structures that over the course of the centuries were disassociated from agricultural work and acquired the prevalent function of a dwelling, taking on the characteristics of a bourgeois structure in Alpine territories. 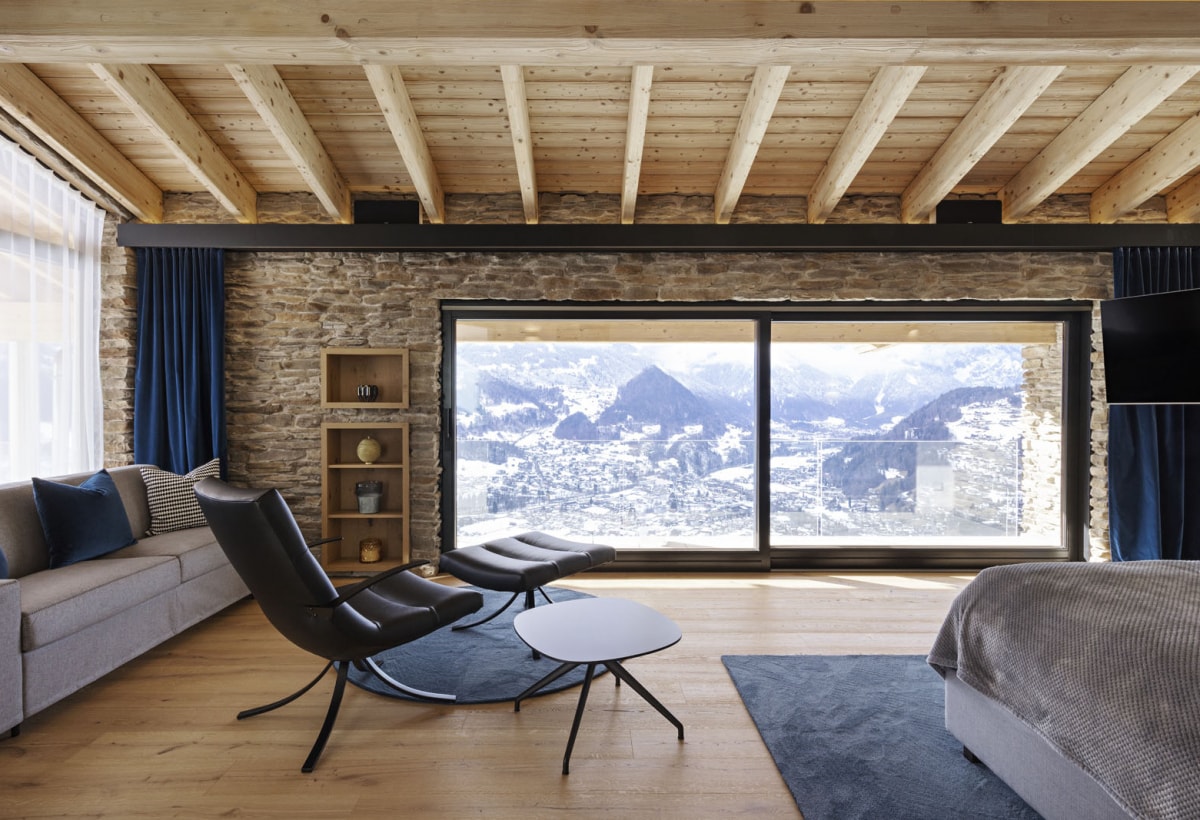 3
In the gallery: large windows allow views of the mountains from different perspectives.

While on the outside the wood has been treated and restored to its original appearance, on the inside the beams have been restored and are clearly visible due to their dark colouring. Large windows allow views of the mountains from different perspectives. The light oak wood and the two indoor fireplaces convey warmth and cosiness. The shades of blue in the furnishings, which can be seen in the cushions and curtains, are a reference to water, the central element of relaxation in the spa area. 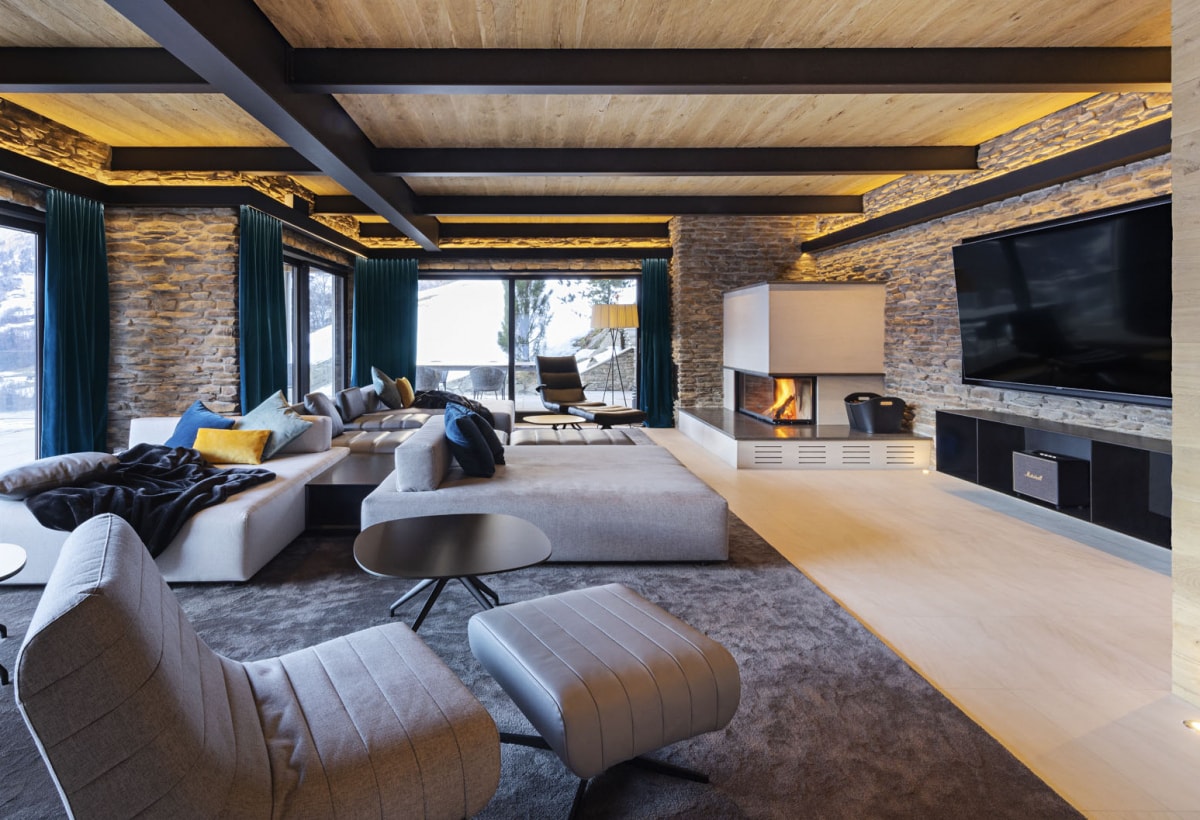 3
In the gallery: light oak wood and interior fireplaces convey warmth and cosiness.

Four spacious bedrooms with their own living room and bathroom allow for retreat and relaxation on the top floor. The modern kitchen, large dining room and spacious living room on the middle floor create a convivial space for communal living. The large terrace gives guests the opportunity to have breakfast al fresco, organise a barbecue or sunbathe. On the minus two floor, the spa area, in which the use of soft materials, soft colours and blue LED lighting contribute to creating a comfortable environment for relaxation. 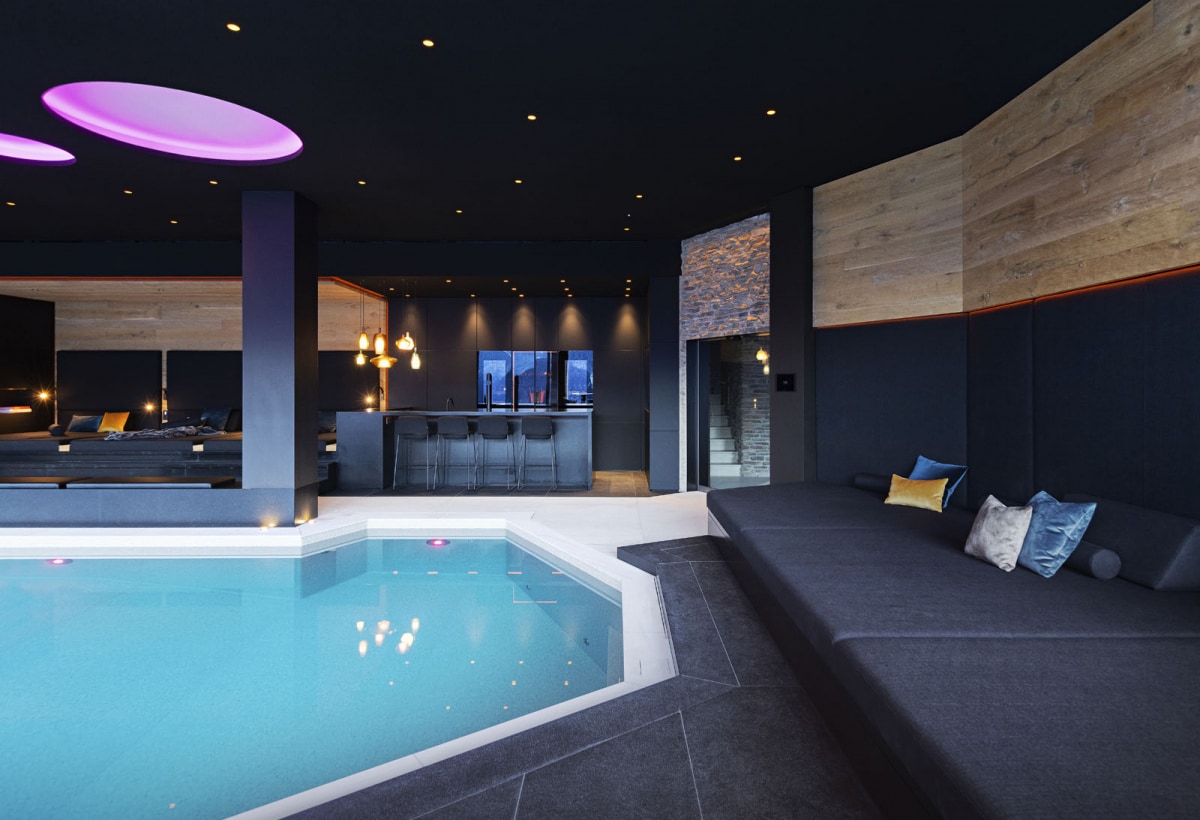 3
In the gallery: the shades of blue in the furniture, found in the cushions and curtains, are a reference to water, the central element of relaxation in the spa area.
#Interior #Homes

A residence that blends Indian architectural style and Mid-Century spirit

A loft by UNStudio in Amsterdam