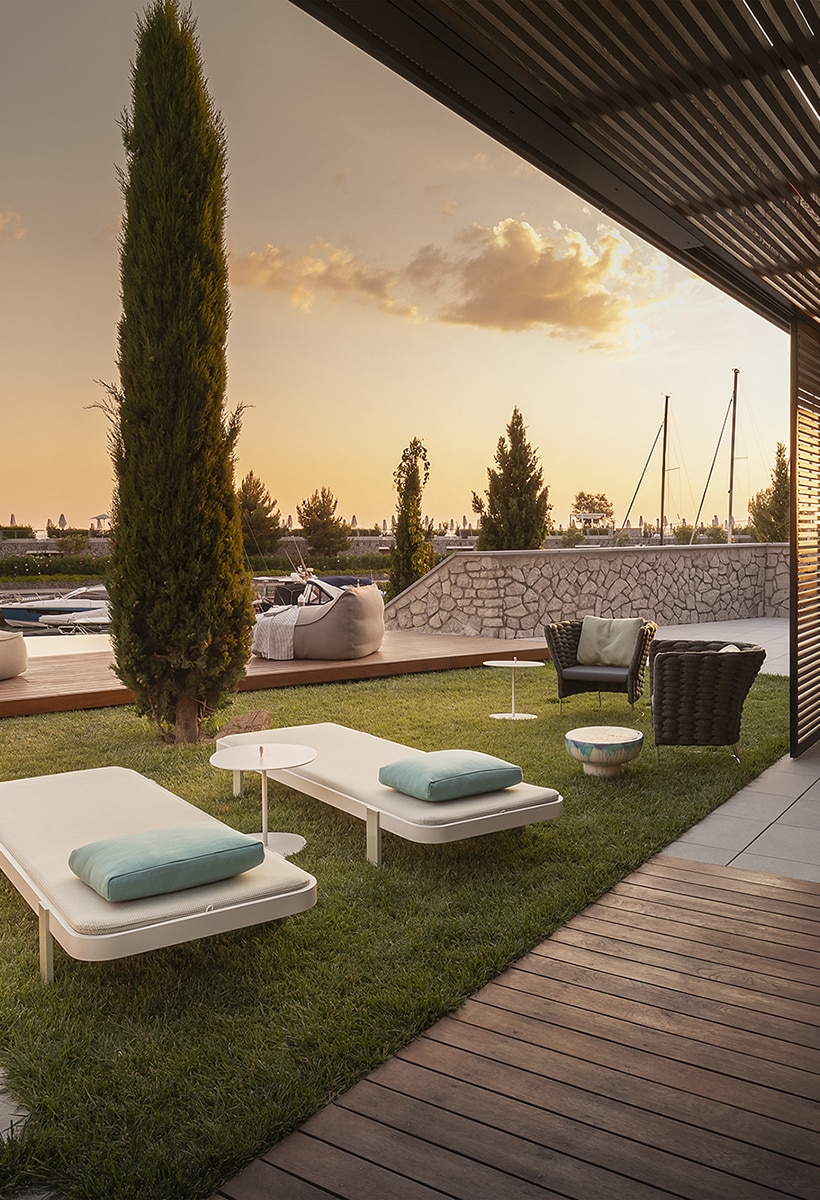 A villa between rocks and sea

A villa between rocks and sea

The interior design of the house renovated by Egidio Panzera Architect in the village of Portopiccolo, in the Gulf of Trieste, refers to the materiality of the cliffs and karst coasts engraved by the erosive action of the sea and the wind

Set among the high white limestone cliffs of the Baia di Sistiana , in the Gulf of Trieste, Portopiccolo is a village muffled, configured as an amphitheater, which embraces the small port in front of it as if to protect it from bad weather and the fury of the sea. Here, an elegant contemporary villa, thanks to an accurate restructuring intervention by Egidio Panzera Architect, extends towards the sea in a calibrated dialogue between internal and external spaces.

The permeability between the private rooms of the house and the garden that surrounds it is restored by large glazed openings and by the use of local materials, natural such as the fossil marble Aurisina Lumachella, or declined in marine shades with vivid shades ranging from cobalt blue to crystalline blue to emerald green. If on the outside it camouflages itself with sobriety in the village, the interior design concept refers to the fascinating typicality of the karst coast engraved by the erosive action of the sea and the wind. 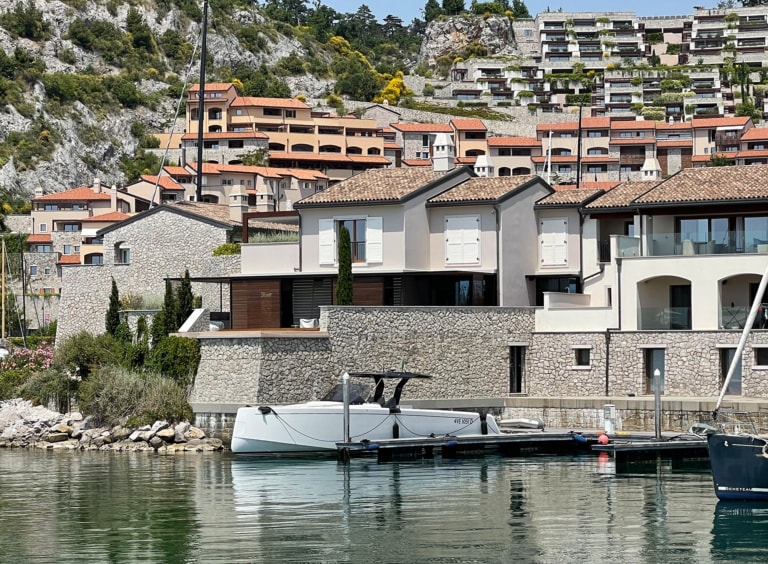 The exteriors: a balanced duality

Consisting of a single body, previously divided into two apartments with common stairs, the new residence consists of three levels: basement, ground floor and first floor. Outside, the villa is characterized by a composed and balanced duality: on the ground floor, plastered with gray, the intervention of the architect Egidio Panzera is more markedly perceived aimed at giving a contemporary and dynamic aspect to the house, while on the first floor, painted white, it was preferred to preserve the original appearance of the house in harmony architectural and chromatic with the village. 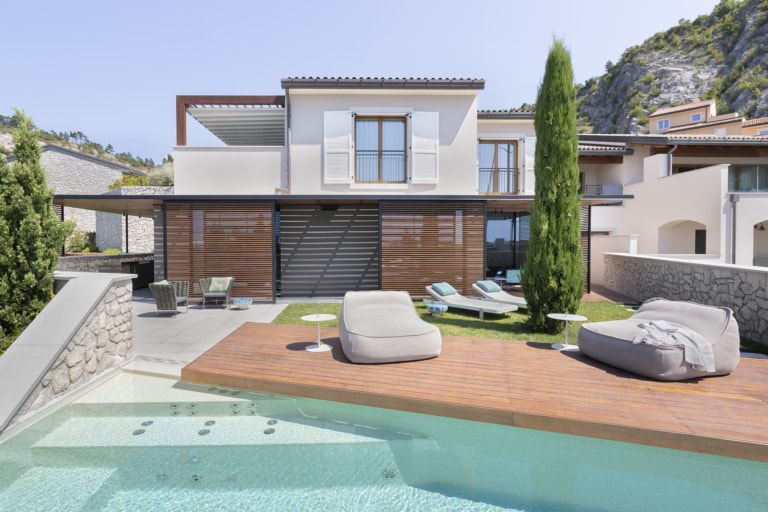 The garden stretching out towards the sea surrounds the residence on three sides, creating three distinct areas: the infinity pool which adapts to the conformation of the land, the outdoor dining area which faces towards Castello di Duino and the large pergola protected by a filtering canopy in teak slats. 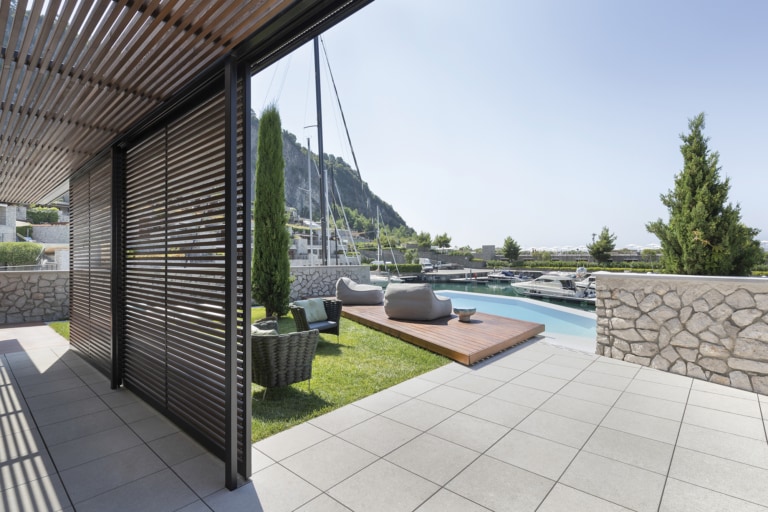 The large windows on the first floor of the villa are protected by refined sliding wooden brise soleil that aesthetically characterize the facade and open or close the view of the private rooms towards the sea and the boats in the marina. The openings can disappear by sliding inside the perimeter walls to create a seamless solution between interiors and exteriors, between intimate spaces and the garden, between sea, rocks and sky. 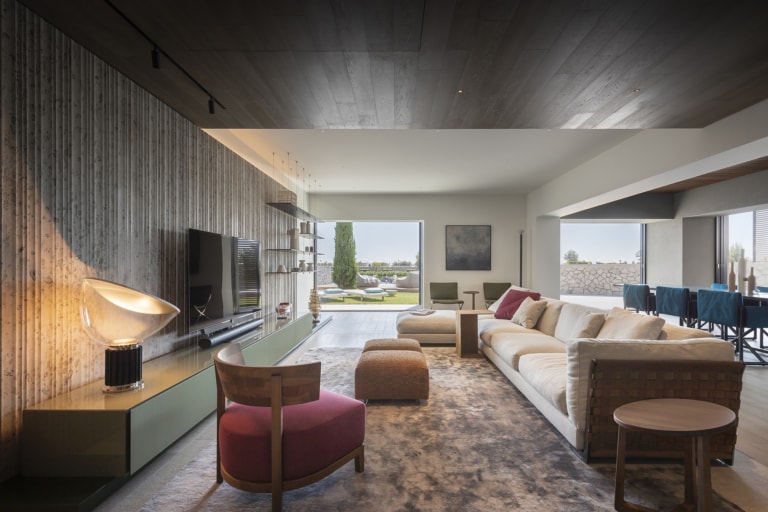 The ground floor from the imprint material

To catalyze the attention when entering the house are the material coverings, horizontal and vertical, which bind the entrance and living area to the garden, as well as to the cliffs and the cobalt blue sea that embrace the pretty village. From the Aurisina Granitello bush-hammered stone floor to the false ceiling in wooden slats to the parquet coordinated in warm and welcoming shades, the covered wall stands out in Aurisina Lumachella, a rare fossil marble composed of a mixture of white, gray and black spots in the shape of a snail shell, the surface of which is worked to create the vertical stone ridges which reflect the typical karst coasts engraved by the erosive action of the sea and the wind. 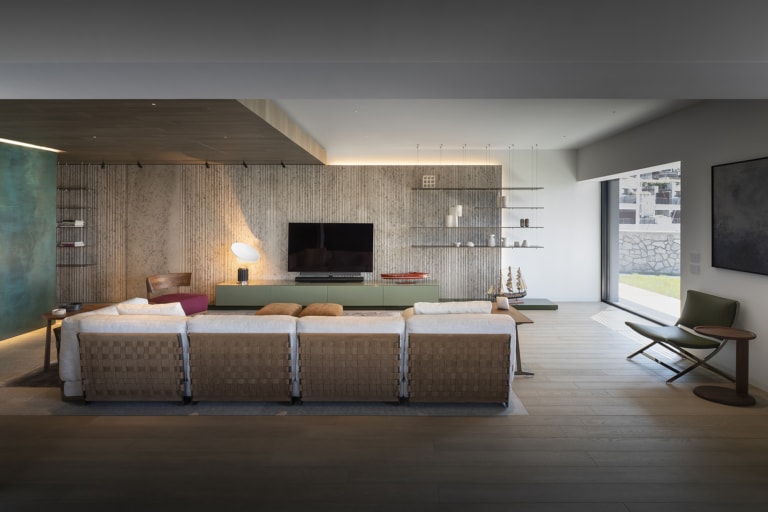 The dining room between inside and outside

Behind the living room, set up with a sculptural sofa Cestone designed by Antonio Citterio for Flexform, the dining room, housed in what was originally a portico, lives between inside and outside, expressing the aesthetic characteristics of both. It is served by an internal kitchen Valcucine, and, when summer allows it and the large windows open, even from the monolithic outdoor kitchen Modulnova. 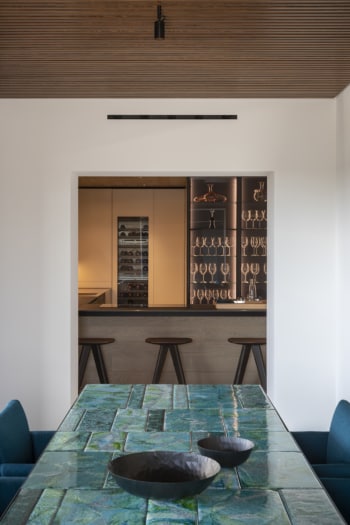 The chromatic research draws from the Trieste sea

To distinguish the interior design project, the accurate chromatic and material research conducted by the Panzera studio. A significant example is the 'device used for the elevator shaft, concealed by a oxidized sheet De Castelli that lights up with intense and fascinating shades ranging from blue to green to reflect the shades of the Trieste sea. The same colors distinguish the dining room where the Sciara table dominates, with a top composed of several elements in lava with glass decoration, and the Portofino seats by Paola Lenti. 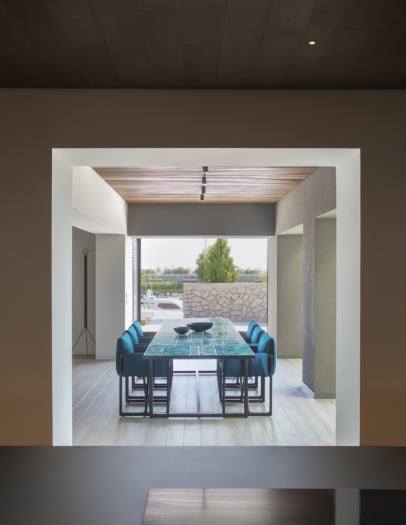 The ground floor is completed by the wellness area, which is accessed through a door hidden in the Lumachella wall of the living room but also from the outside. In addition to the gym, there are three rooms: sauna and Turkish bath, in wood and green Costa Smeralda marble, and the changing rooms in metal, concrete and printed glass. 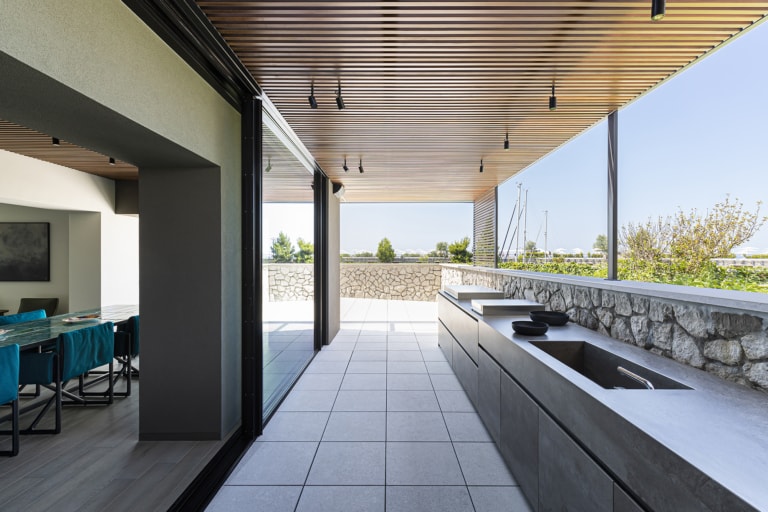 On the first floor, the bedroom is an independent suite

The living room leads to the first floor by elevator or by climbing the double-height stairs, decorated with an iridescent metal mesh cloth. Here, a hallway divides the guest bedrooms with their bathrooms from the double bedroom, configured as an elegant independent suite. Here, the custom-made furnishings distribute the spaces creating different functional corners: walk-in closet, bed area, breakfast area, home office and bathroom. 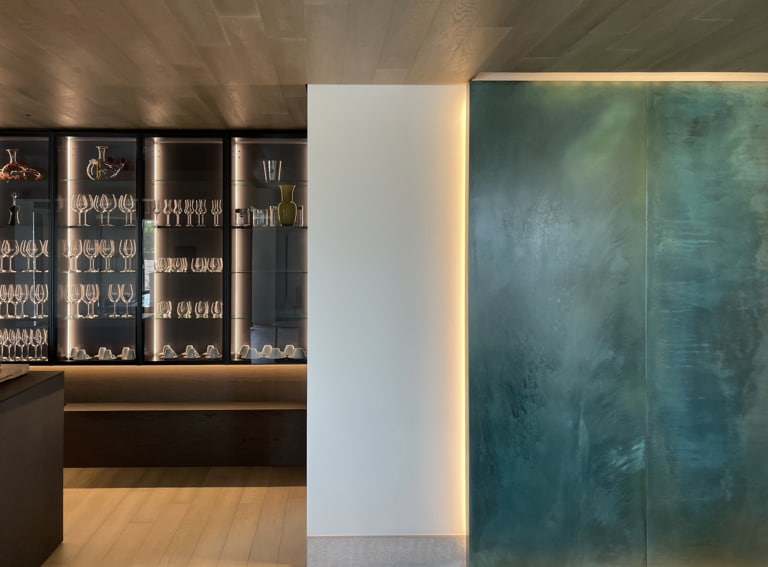 Even in these environments, the materials are refined, passing from the oxidized sheet metal by De Castelli to the woods in desaturated shades of green and blue, from the caramel leather of the inlays to the green leather of the upholstered bed, from the decorated glass OmniDecor up to the Aurisina stone. A sophisticated metal mesh sheet in coppery tones divides the home office area from the bed, making the space vibrate with light and reflections. 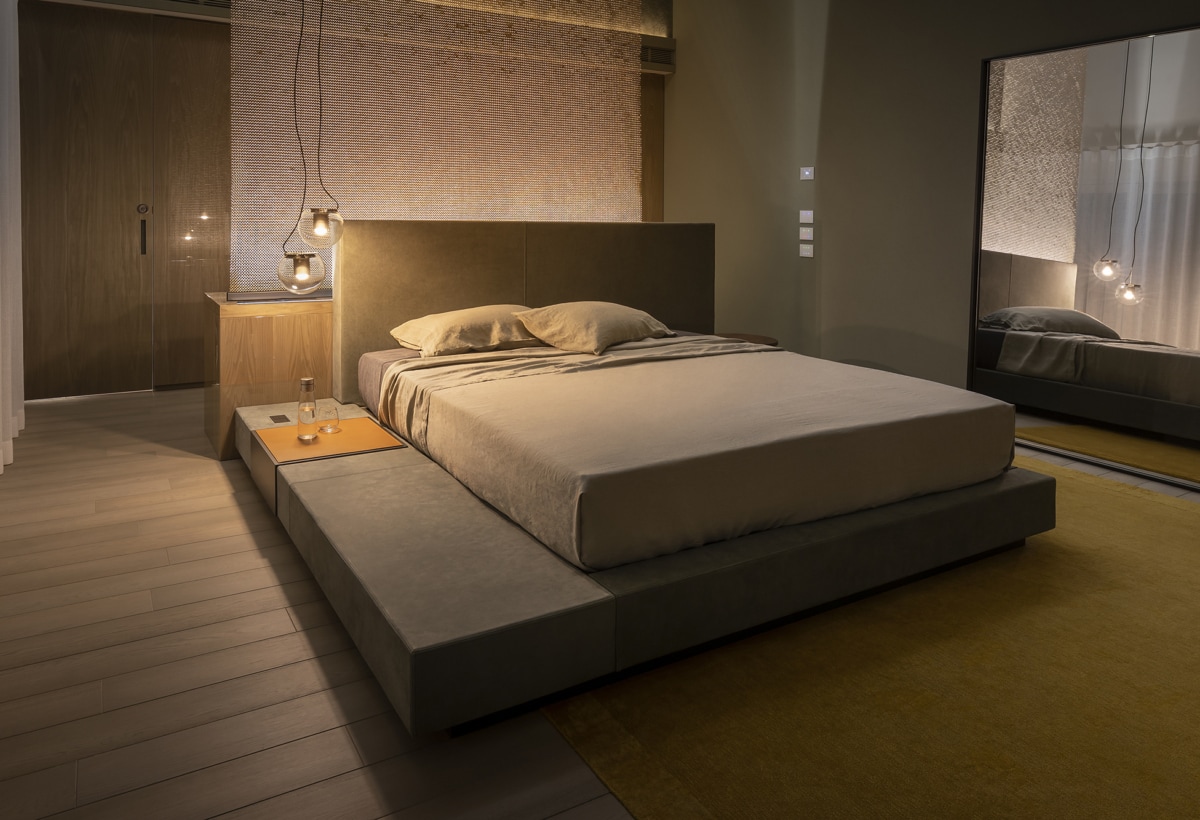 Overlooking the promontory and the castle

The double height with sloping wooden ceiling projects the room towards the large terrace overlooking the promontory on which the Duino Castle stands. Sober and elegant tones also characterize the adjoining bathroom, where the decorated glass is part of the Lines collection designed by Egidio Panzera for OmniDecor. 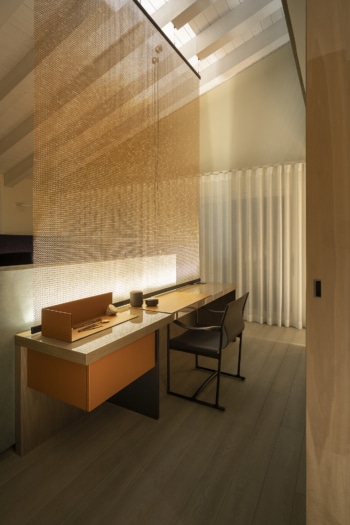 The basement is dedicated to guests, work and leisure

Conceived as a space for leisure and entertainment, but also for work, dedicated to guests, who have two bedrooms with bathrooms, the basement allows direct access to the pier. A large open space houses a custom designed kitchen, a living area with large reconfigurable sofas, a large coworking table and a cinema room. The calm tones of the gray concrete resin floor of HDsurface are contrasted with the colored walls and the one in cork, to which memories, thoughts, drawings, photos and polaroids will be pinned. 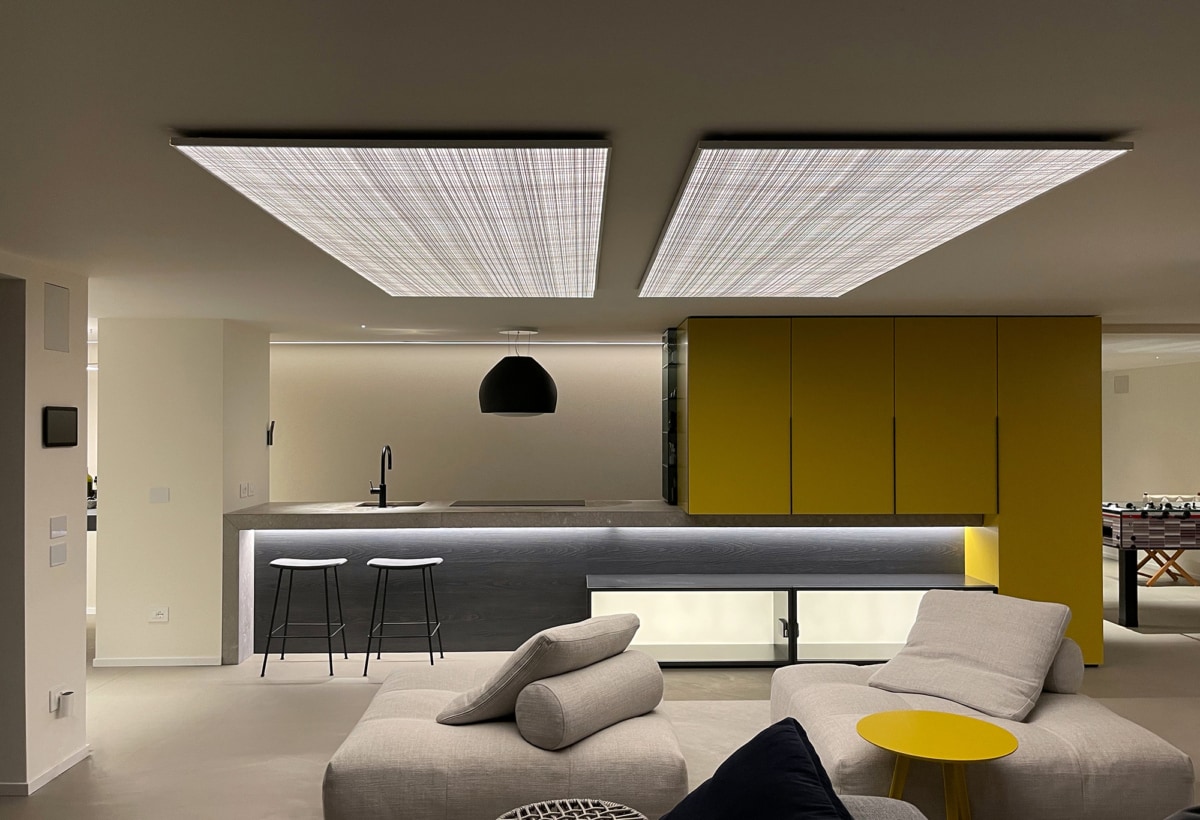 To embellish the basement the wine cellar, a small amphitheater carved into the rock of the mountain; here, a lamp Occhio emphasizes the suggestive circular imprint that characterizes the ceiling. 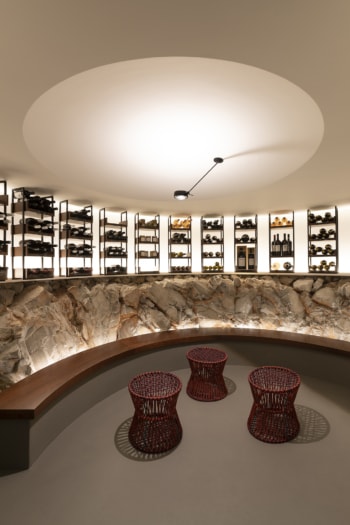 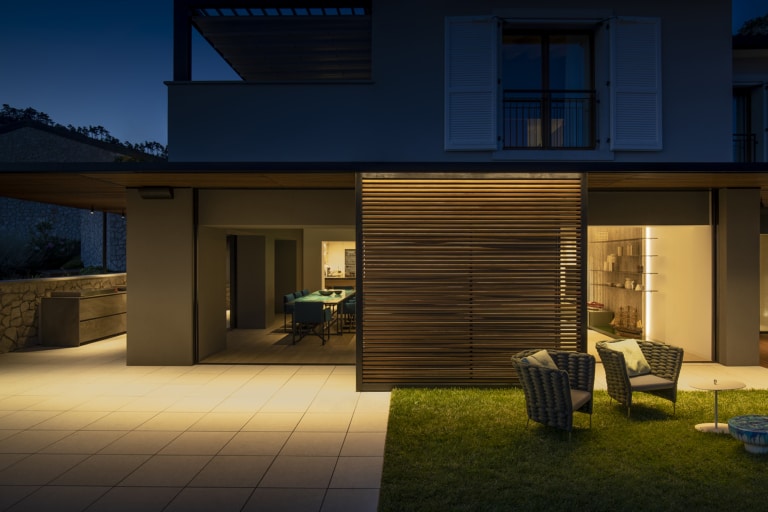