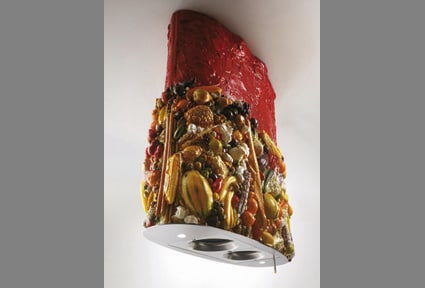 The eighth edition of the Triennale Design Museum, during Expo Milano 2015, presents Cucine & Ultracorpi, curated by Germano Celant. Developed in close collaboration with Silvana Annicchiarico, director of the museum, this edition is based on the science fiction novel Invasion of the Body Snatchers by Jack Finney, from 1955, and the film of the same title based on the novel, directed by Don Siegel.

In the story, invading aliens conspire to spread themselves among the inhabitants of the earth, mingling with human beings by taking human form. Likewise, Cucine & Ultracorpi narrates the slow, inevitable transformation of cooking equipment into machines and automata.

An invading army that since the mid-1800s, with the advent of industrialization, has spread to the point of replacing many human practices of cooking. The aim is to trace the evolution in Italy of this conspiracy of kitchens and appliances, from the first documentary evidence to the present, also in relation to episodes of international design and foreign industry.

Alpi and Ron Arad: If I Were A Carpenter

Studio Older: “Through the (recovered) clothes we talk about the energy and political crisis”