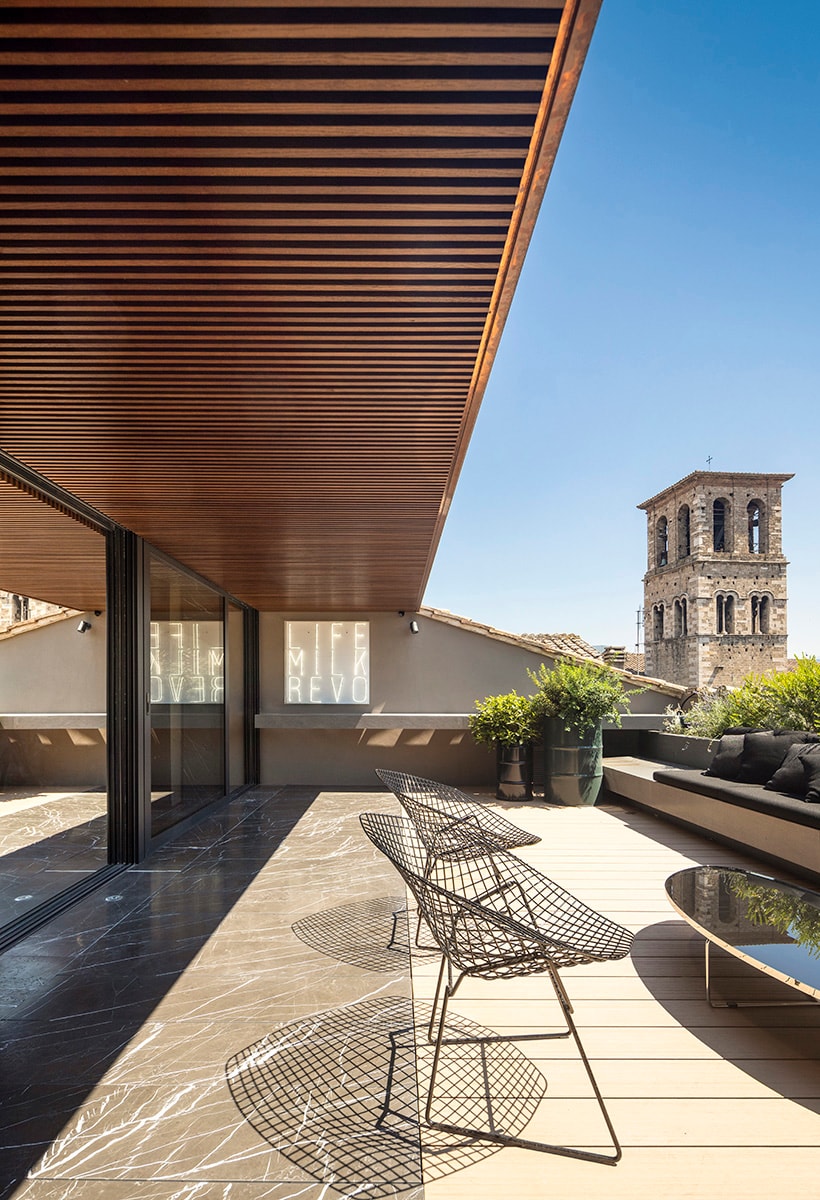 In the old Dovecote

#architecture
In the old Dovecote

At Terni, in Umbria, the attic of a building from the 1500s rediscovers its roots as a loft ahead of its time, and a radical contemporary approach to materials and furnishings, with no concessions to banal pastiche

Palazzo Manassei, a privately-owned building in the center of Terni, Umbria, rediscovers its Renaissance spirit in a project for an attic of 450 square meters, carried out by the Roman architect Carlo Berarducci. A spirit that returns to its original splendor, not in the style but in the structure, that of the old dovecote of the palace. The client is also something of a Renaissance personality, offering the dream of any architect, namely total freedom in the entire project, including the furnishings.

The attic, a sort of loft ahead of its time, has been restored in terms of the original structural walls, giving rise to an apartment based on a game of perspectives, wings (like those of the kitchen counter, which slide, in brass-coated grilles of iron sheet by De Castelli) and absolutely contemporary film-like angles, without compromises or concessions, in a mixture of modern and historic, a delicate balance between a radical concept and a soft, gentle intervention, through the use of materials and an advanced technological system, pervasive but not invasive, hidden from view.


Carlo Berarducci
°
Carlo Berarducci Architectureis an internationally recognized architectural firm based in rome, and working all over. Carlo berarducci think that architecture is an intuitive discipline that contains an artistic component in which converges an essentially visual baggage, and he sees no difference in the approach between the large scale of the architecture and urban design and the small scale of the object and the interior design, because architecture is fundamentally the organization of space and of the elements that define or fill it. Designing the relationship between interior spaces is no different from designing the relationship between buildings in an urban area or a building and a natural setting. Even the small-scale of industrial object can not be distinguished from architecture, the design of a chaise longue or a table starts from the same premises and process, with the same vision luggage transferred to the small scale.

Radiant heating and cooling set into the floor, together with a dehumidification system, ensure optimal comfort; a system of dust removal hidden in the masonry provides everyday cleaning, while spotlights and screens descend through invisible openings in the ceiling, with coordinated control of lighting and physical plant elements, also to govern the functions of the home from a distance, via smartphone.

It’s hard to imagine that an apartment with such an extremely modern image could be the result of a recovery of 16th-century roots, and yet it is true. What was your perspective in this return to the past?

The project consisted in eliminating things, to reveal the original structure: the attic had undergone restoration about a decade earlier, which tried to suggest antique decorations, with false partitions. But these dovecotes under the eaves were originally left completely open, like a loft, with oval windows for the pigeons to enter.

A client who decides to revolutionize taste, at 360 degrees. How did that happen?

When the client saw my house in Rome he asked me to completely change his residence, granting me total freedom. The only demands were to create a small apartment for his children, complete with a kitchen. 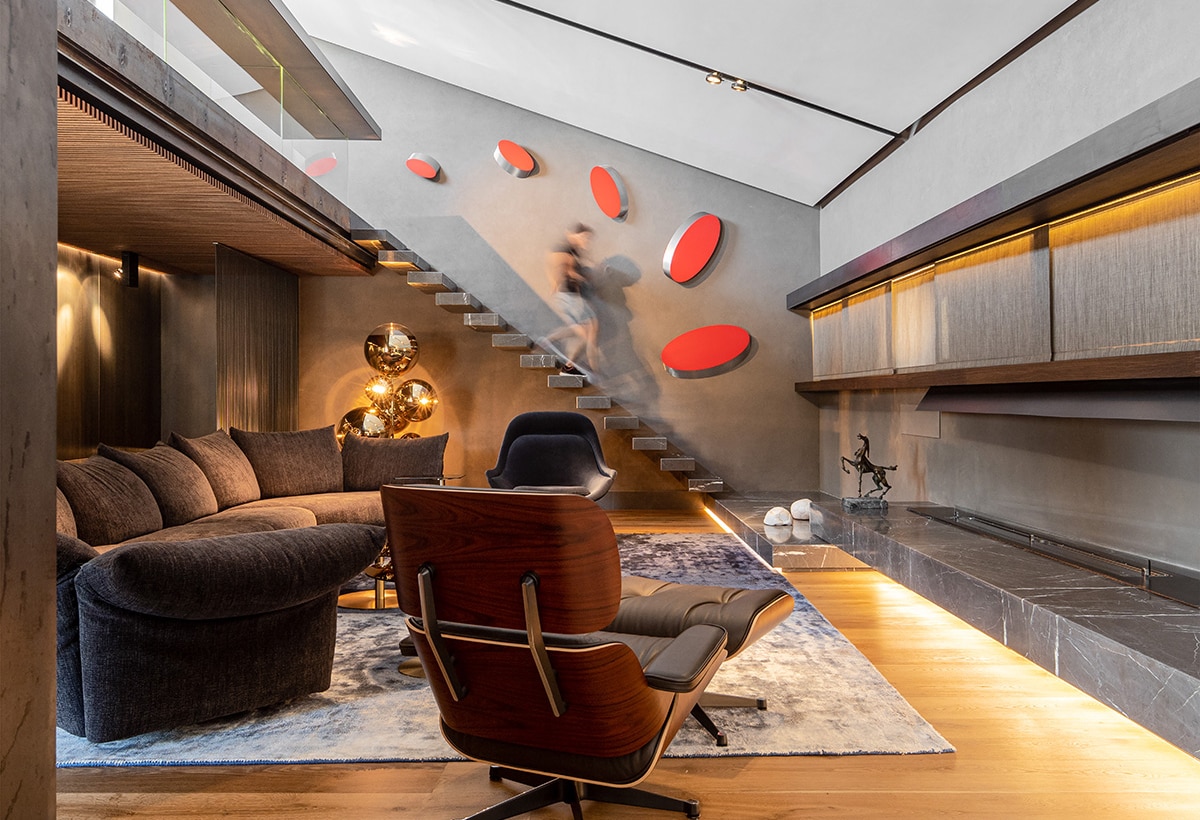 7
View of the living area towards the back wall, with the cantilevered staircase in Grey stone leading to the loft-studio. In the foreground, the Lounge Chair by Charles & Ray Eames, Vitra, and the Standard gray velvet sofa by Francesco Binfaré for Edra. The chair in steel rod is the Easy Chair by Warren Platner, in the Knoll catalogue, while the shaded carpet is by Eberson Moss. On the wall, an optical work by Wolfram Ullrich.

An open space on different levels, though, which lends itself to a subdivision of rooms.

The two levels were also structural: from the entrance one reaches an initial zone containing the bedroom, the fireplace area and the son’s apartment; then there is a staggered half level, that of the attic proper, with the living area, kitchen and terrace. What we have done – and what has been decisive – has been to completely open the entire level of the upper attic, removing the partitions and added features, making it into a single open space. Raising this space by half a meter, we have brought the openings to the height of the gaze, because the oval windows were too high and did not offer a view of the outside. All this liberated the main source of light and external views, that of the terrace which previously belonged to a closed chamber.

“
Though we have emptied out the house in its structure, the furnishings do not create a sense of emptiness. The structure is taken back to its roots and remains minimal, with the objective of opening up space, but the deployment of natural materials and furniture sets out precisely to fill up that space."

What impact has this revolution towards the contemporary had on the lifestyle of the owner?

The best thing he told me was that prior to the project he never spent time in the apartment, and neither did his children. Now, on the other hand, the children are constantly coming and going, they bring friends, and he and his companion like to stay there, because they field no need to go out.

Is this radical approach with no concessions to the period of the building, in the furnishings and materials, part of your stylistic signature, or is it related particularly to this project?

It’s my way of proceeding, because I believe it is more respectful of history and the site, rather than constructing a fake. The radical response arises to eliminate everything that did not belong to the original structure, with a contemporary alteration. But even in this contemporary context, we have used natural materials, things that could also have been utilized in the 1500s: cement stucco with an earthy, porous, natural effect, as the original may have been; brushed natural gray stone with a rather aged effect, making it seem worn. The stone we have used is not from this place; the local stone is travertine, but the owner wanted darker tones. It is not a space of cold, artificial materials, but of warm ones: the iron has been left natural, with a wax finish, the wood has many knots, a thermo-treated oak, brushed with visible grain and finished with wax.

The house is full of design furniture, both international and Italian, from the 1950s to the present, but the stand-out is your Tavolo Italia, in the form of the peninsula. A strong statement, a brash face-off with the modernist internationalism of the rest of the house. How did you reach the decision to include such an object, with a character that differs from the overall décor?

It wasn’t included, it was created for the house. The idea, in fact, comes from the fact that we needed a table for a trapezoidal dining room, where an ordinary symmetrical rectangular table would not have worked. What was needed was a fluid form. The references were Renaissance maps, and Italia Rovesciata by Luciano Fabro, from 1969. 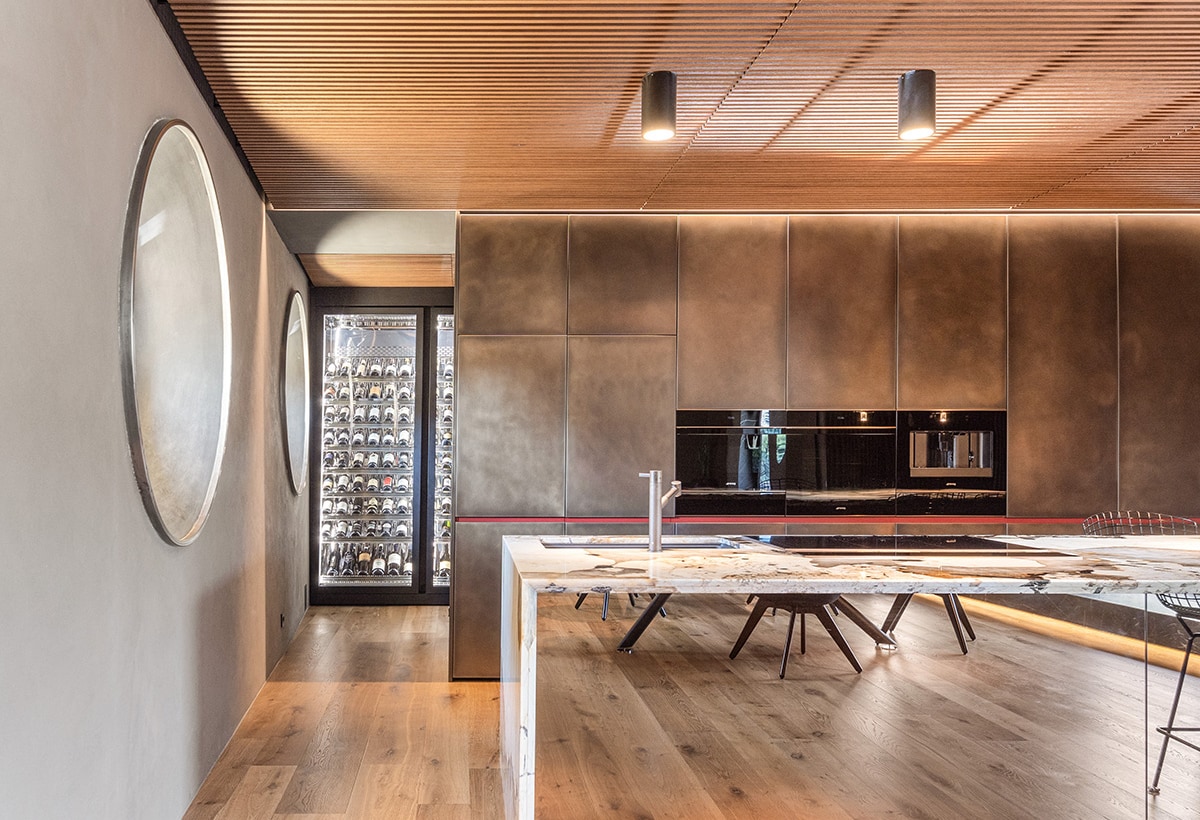 7
View of the kitchen open to the dining zone, with the island in Brazilian Patagonia granite at the center and seating by Harry Bertoia for Knoll.

Which region is at the head of the table?

No region. Or, more precisely, the head of the table is multiple.

A red Italy. How should we interpret this object?

Red is one of my passions, which often emerges, especially when I am creating design pieces. This ‘racing red’ is the color of speed, of racing cars, Ferrari red. Over the table, suspended in the air, we see its chandelier. A term that suggests historical mansions. The Manassei three-arm chandelier was also created for this home, due to the need to fill the two-story space with a free, floating form, like a mobile by Calder.

While the architectural project has refurbished the pure structure of the open space, the furnishings constitute anything but a minimalist tableau. What reasons lie behind this ‘filled-up’ approach?

It’s true. Though we have emptied out the house in its structure, the furnishings do not create a sense of emptiness. The structure is taken back to its roots and remains minimal, with the objective of opening up space, but the deployment of natural materials and furniture sets out precisely to fill up that space. So there is no minimalist emphasis on an empty environment, and instead we have the pursuit of warmth and comfort. Also for the furnishings, the choices are radical: Italian and international design, without any mixture between antique and modern, of the sort many decorators boast about. I was given free rein here, so I have created my ideal collection of pieces from the history of design. I would love to own them all: they have made history in the past, and continue to do so today.

“
The attic, a sort of loft ahead of its time, has been restored in terms of the original structural walls, giving rise to an apartment based on a game of perspectives, wings and absolutely contemporary film-like angles, without compromises or concessions"

In this ideal collection, what are your favorite pieces?

Those of the 1950s, like the armchairs by Charles and Ray Eames (the ES106 Billy Wilder from 1968 produced by Herman Miller, ed.) or those of Warren Platner (the Easy Chair from 1962 by Knoll, ed.). Then, of course, I have juxtaposed pieces in terms of resemblances of form, or in any case in terms of affinities.

Your next project will be for the same client, a villa in the midst of nature near Sangemini, also in the province of Terni. Will you be applying the same approach used for Palazzo Manassei?

Here too we have to start with what exists, which in this case is the topography of the landscape. Seeking the right exposures, light and space, the approach – in definitive terms – is indeed the same.