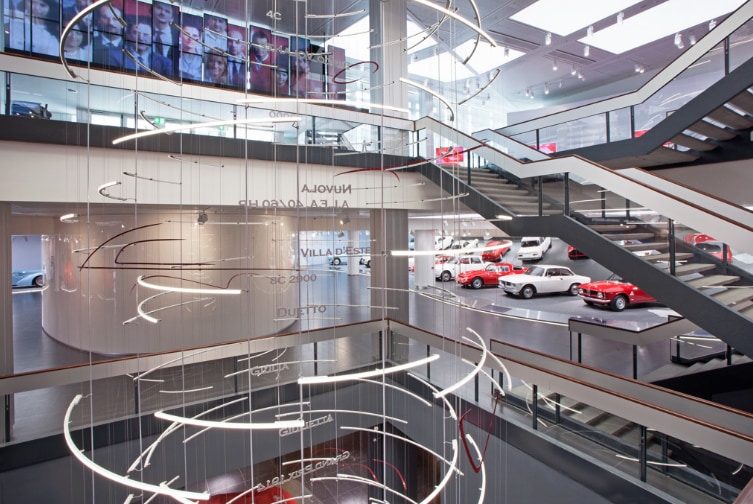 Alfa Romeo: for the world premiere of the new Giulia, the Historical Museum of Arese opens its doors

Alfa Romeo: for the world premiere of the new Giulia, the Historical Museum of Arese opens its doors

Alfa Romeo celebrates its 105th anniversary by opening the Historical Museum of Arese to the public. The heart of a true “brand center,” the “Time Machine” museum has a bookshop, cafe, documentation center, test track, spaces for events and a showroom with delivery area: an ideal link between past, present and future.

Opened on 24 June for the world premiere of the new Giulia, “The Time Machine – Alfa Romeo Historical Museum” will open to the public on 30 June, every day except Tuesday from 10.00 to 18.00, with extended hours until 22.00 on Thursdays.

The museum contains the most important pieces of the historic Alfa Romeo collection, formed starting in the first half of the 1960s. First opened in 1976 but only by appointment, after the closing of the production plant the museum was closed in 2009.

In the context of the global revitalization of Alfa Romeo, the museum in Arese has been selected as the fulcrum of the brand’s rebirth. At the end of 2013 the architect Benedetto Camerana was assigned to create a new design, combining the objectives of renewal with the renovation needs of the building. Work began in the summer of 2014, and in less than 12 months the entire complex had been rebuilt, in a project done by FCA Partecipazioni.

The architectural design revises the functional scheme of the administrative complex, adapting it to new activities and the expected flow of visitors. The key element of the project is the red structure that crosses the complex: from the canopy that welcomes visitors, it passes from the entrance area to the start of the exhibition itinerary with the new volume of the escalator.

This latter architectural graft, easily visible from the highway with its “Alfa red,” is the symbol of the rebirth of the museum: a modern sign set into the architecture from the 1970s, forming the necessary link between history and the contemporary world.

The museum displays underline the traits of Alfa Romeo, thanks to an evocative luminous installation that vertically crosses the building: lights, words and signs of style are activated in a spectacle with a descending helical movement, symbolizing stylistic continuity and technological prowess over time.

The new Alfa Romeo Giulia embodies 105 years of stylistic and technological excellence Made in Italy. Its design expresses three particular traits of Italian style: sense of proportion, simplicity and quality of surfaces.
Innovative avant-garde motors: on the Quadrifoglio version, debut of a 6-cylinder gasoline turbo for 510 HP, based on the technologies and expertise of Ferrari, the new reference point of the brand.
The choice of rear or four-wheel drive is not just a tribute to the most authentic roots of the Alfa Romeo legend, but also a technical solution that ensures high performance and enjoyable motoring.
#News #People