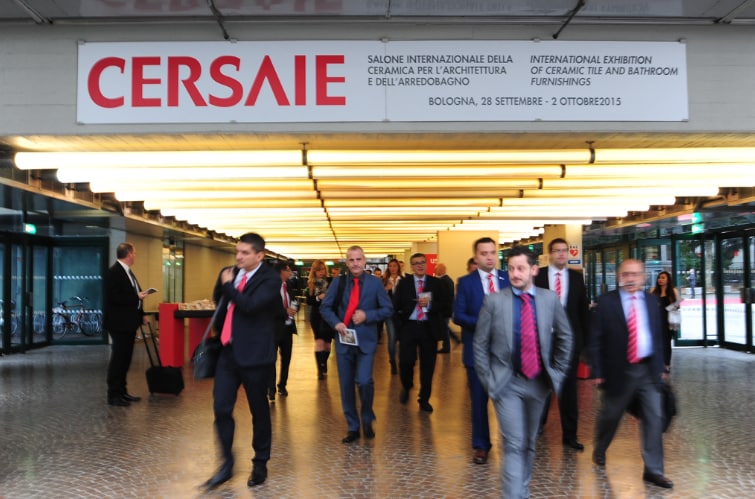 Over 101,000 persons, thanks to the influx of foreign visitors. This is the main result of the 2015 edition of Cersaie, the international fair of ceramics for architecture and bath furnishings, from 28 September to 2 October in Bologna.

Representative quality and internationalism are the main features of Cersaie, which also reported a consolidation of foreign exhibitors in other sectors this year, especially that of wood. Along with 872 exhibitors, of which 319 from abroad, hailing from 39 countries (+1, since Sweden has now joined the ranks), the 2015 edition welcomed total participation of 101,809 persons (+0.8%), with a foreign component equal to 48,231 units, an increase of 1632 over the previous edition, now at a level of 47.4%. Italian visitors were stable, at 53,578.

There was a massive influx of journalists: 694 (of which 257 from abroad), with growth in the Italian share (+27.4%) due, among other things, to the international press conference held for the first time at Palazzo Ducale in Sassuolo.

Numbers that confirm Cersaie’s role as the leading fair event for the development of global business for ceramic and flooring materials, as well as for bath furnishings. The fair is also a driving force behind international trade: visitors came from over 150 nations, and many international delegations browsed through the corporate booths, thanks to the Cersaie Business program, in collaboration with ICE and the Emilia Romagna Region.

Popular initiatives included the works in progress and the encounters of ‘La Città della Posa’, for the training of young professionals and the presentation of different installation techniques. Many consumers took part in ‘Cersaie: design your home’ with the presence on Thursday of Paola Marella, also involved in the event #selfeet.

Bologna Design Week made a positive debut, with a continuous flow of visitors at the cultural events held in prestigious locations around the city in the evening.