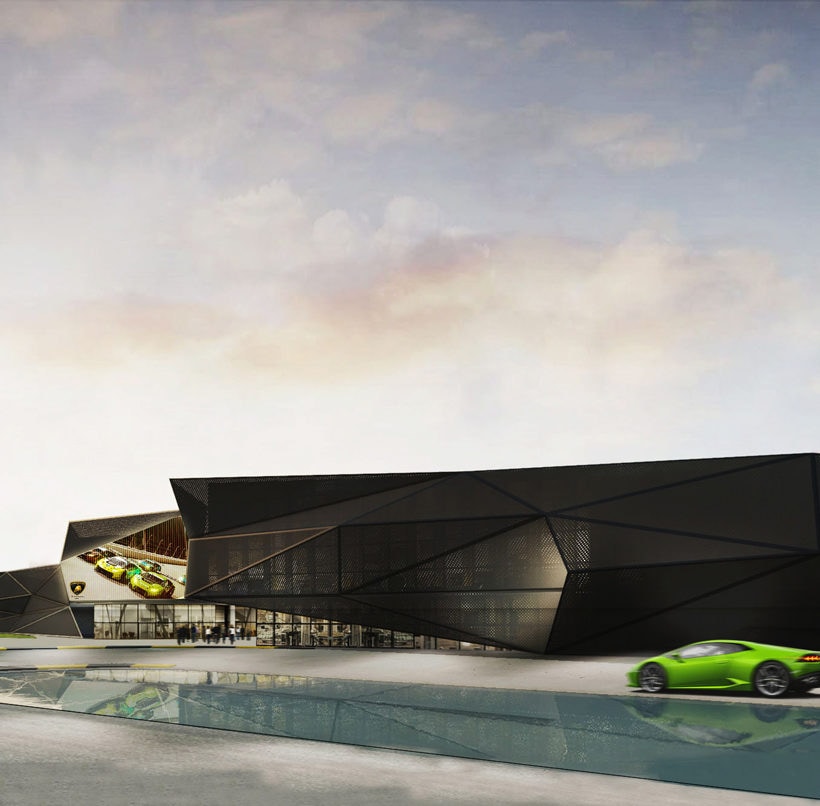 In 2016 the CEO of Lamborghini Automobili Stefano Domenicali asked Studio Fabio Novembre to explore the possibilities of renewal of the compound at Sant’Agata Bolognese.

In 2016 the CEO of Lamborghini Automobili Stefano Domenicali asked Studio Fabio Novembre to explore the possibilities of renewal of the compound at Sant’Agata Bolognese. The design research, free of constraints, led to development of a functional concept and reasoning about the near future.

The plant has developed in different historical moments connected with the growth of the brand, starting from the cornerstone laid in 1963 by Ferruccio Lamborghini. It now has various zones that have been analyzed by Studio Novembre.

The frontal image is composed of buildings made in different historical periods with different styles. The design proposal of a single recognizable facade in line with the essence of the brand sets out to reconnect all the parts.

The facade to the left of the main entrance has been imagined as being covered by a polygonal structure in black perforated sheet metal based on the lines of Lamborghini automobiles, in contrast with the facade of the offices, replaced by full-height glazing.

In the revised, reorganized garden Studio Novembre has suggested an area with a focus on automotive performance.

A new elevated walkway through the Compound, the ‘Bauline,’ divides circulation flows and offers alternative vantage points on the facility and the surrounding plains.

It is characterized by the presence of greenery, underlining the commitment to make the entire plant carbon neutral.

The walkway reprises the hexagonal design of the Lamborghini exhaust ports and becomes a sort of physical timeline connecting the older buildings to those of the future: a small open-air museum.

The fronts of the various inner buildings, extending for 600 meters in different styles, are connected to create an updated image and a new rhythm.

Fins at intervals of 3 meters add character to the long avenue, matching the heights of the buildings on either side. They suggest the fundamental lines of Lamborghini automobiles, in a sinuous, undulating cadence.